We named Beach Bunny our February Artist of the Month on the strength of their debut album, Honeymoon. Today, the Chicago indie pop act has formally released that effort, and you can stream it below via Apple Music and Spotify. Following that, read the band’s complete Track by Track breakdown of the LP.

“Definitely listen to it in order, because it ends on a happy note,” Trifilio told Consequence of Sound’s Tyler Clark during their AOTM interview. “So maybe if you’re feeling depressed on Valentine’s Day, it’ll lift your spirits up a little. Treat yourself if you’re single. Maybe take yourself out and listen to it in the restaurant on your AirPods.”

Artist of the Month Beach Bunny on Led Zeppelin, TikTok Stardom, and the Chicago Music Scene

Before releasing Honeymoon, Beach Bunny shared the singles “Dream Boy” (the Origins of which the band detailed for us before we named it one of our favorites songs of 2019), “Ms. California”, and “Cloud 9”. In support of the album, the foursome will head out on a full tour that includes stops at Shaky Knees, Coachella, and Primavera Sound. Get tickets to all their upcoming shows here.

Below, Beach Bunny have given a detailed Track by Track breakdown of Honeymoon.

“Promises”:
This is the most honest and vulnerable song on the record. I wrote it during a post-breakup moment of uncertainty in dealing with my feelings. It is a song that began in 2017 and was re-worked several times over the following years until it said everything it needed to say. Originally “Promises” was going to debut on my EP Crybaby, but I’m glad It’s made its way onto Honeymoon. It evokes the feelings of loving someone while simultaneously hating them, which typically follows heartbreak. It was meant to be a true heartbreak anthem for myself when I was dealing with a lot of pain.

“Cuffing Season”:
“Cuffing Season” is a song about feeling doubt in a relationship. The lyrics discuss uncertainty in the future of a budding relationship as we exit out of the honeymoon stage and problems start arising. “Cuffing Season” was named after the period of the year when everyone wants to buckle down with someone romantically, however, the lyrics highlight the urge to break free from romance, worry, and other unsettling emotions.

“April”:
“April” is a song about regret and mourning memories. The lyrics talk of wishful thinking and romanticizing the prior relationship in a very grief-stricken way. Originally, “April” was written as a sappy Christmas song, but I loved the melody and decided to alter the lyrics to write something a little more genuine. “April” unintentionally follows the pattern of other Beach Bunny month themed songs ie: “July”, “February” as far as the title goes. 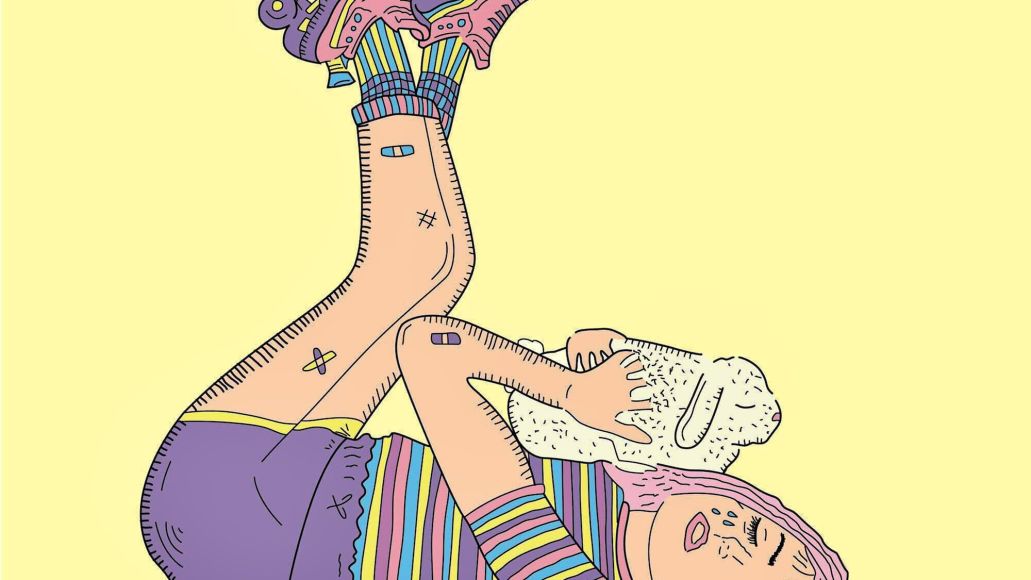 “Rearview”:
This is a song about insecurity. The lyrics talk about not feeling good enough for someone and not good enough for oneself. The whole theme is about feeling unworthy of love, which is something I experienced during the time I was writing it. The song also touches on struggle, long-term grief, and comparison to others. It is less about the relationship with the other person and more about the relationship with oneself.

“Ms. California”:
“Ms. California” is an upbeat track that drives home a theme of whiny jealousy. It’s the feeling you get when you want to be with someone but their heart’s in another place. To me, it reminds me of when a child wants a toy and their parent takes it away – it’s not about deep-set envy but more of an irritated, frustrated anthem of wanting what you can’t have.

“Colorblind”:
“Colorblind” is a song about boundaries. The lyrics talk about an on and off again relationship where one person is consistently getting hurt and doesn’t want to deal with it anymore. The lyrics have a bitter, snappy tone to them as the person keeps apologizing for past mistakes but doesn’t change. It’s a song about knowing when to let go and walk away from a painful situation and not take crap from people who don’t respect your feelings or have integrity.

“Racetrack”:
“Racetrack” is a slow, quiet anthem about feeling like you’re constantly in second place. It’s also the second song off the album that majorly talks about insecurity, this time more relationship oriented with another person than oneself.

“Dream Boy”:
This is a song about new love and giving love a second chance. The lyrics talk about being hurt in the past and having a guarded heart but that this love feels different. It’s a song about having a crush on someone special or falling back in love with someone all over again.

“Cloud 9”:
“Cloud 9” is a proper love song about feeling like you’re in the clouds when you’re in love with someone. I wanted to end the album with a proper happy, no strings attached, track which is where the idea sparked. It is also an ode to my little snail son Nigel who passed away last year but I will adore forever.