Diplo was in São Paulo this week to take part in Brazil’s famed Carnival celebrations. However, what was supposed to be a festive street party DJ’ed by the superstar producer quickly turned into the frantic scene of a shooting.

The incident took place Tuesday right as the 41-year-old artist was about to begin his set. According to Remezcla, the shooting was the result of a dispute amongst audience members,

“According to witnesses at the scene, the shootout took place after a man attempted to snatch a chain off of someone’s neck in the audience. The victim pulled out a gun and shot the alleged thief in the stomach and a woman in the thigh (witnesses suggest she might have been friends or associates with the alleged thief, and got caught in the crossfire as a result).”

As soon as gunfire rang out, security detail rushed to Diplo, who was performing on a stage that reportedly sat atop a truck. “Everyone on top of the truck bent down and security guards went to protect Diplo,” one witness told local publication UOL. “Someone heard a shot and warned the people who were on top of the truck to duck. When everything calmed down, the security guards removed him [Diplo] from the truck.”

“This breaks my heart that someone was hurt during a party.. All I can ask God for is that he can protect everyone when we are gathering to celebrate.. We want all our shows to be a safe place. I know that Brazil is considered dangerous from outsiders but I have been coming here for 20 years and have never seen this kind of violence until today.. People tell me that I’m lucky.. in the aftermath I know everyone is alive but I’m praying for them and I know it’s not going to change the carnival spirit.”

One of Diplo’s posts included a video featuring audio of the actual gunshots. “You can [see] in the second video on my story there was gunshot [sic] during the song and some brave security rushed to the side of the truck…” he captioned the clip.

Despite the scary situation, there are no reported fatalities, as Diplo noted in his post.

Check out all the relevant photos and videos below. 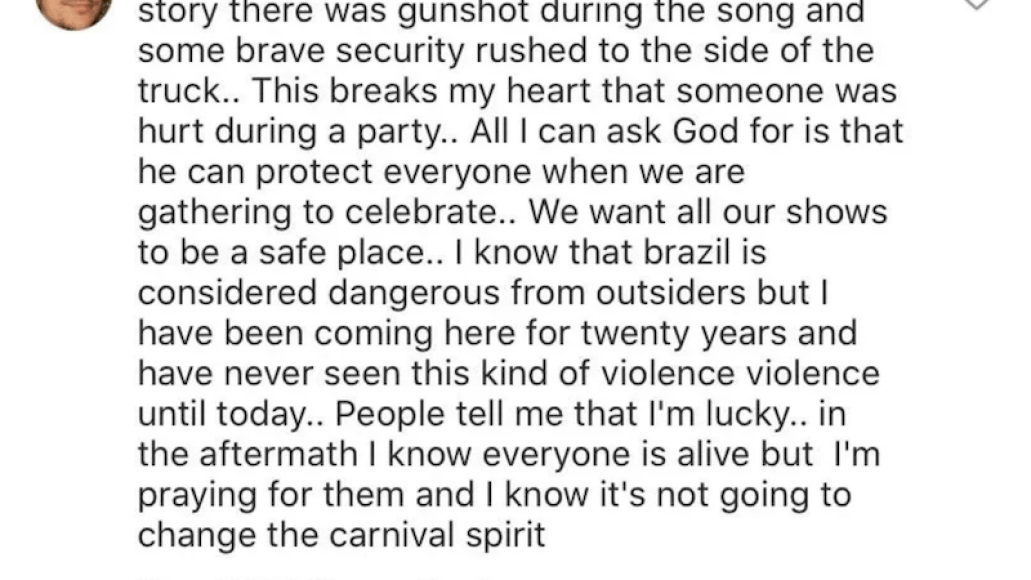