This review originally ran in October as part of our Fantastic Fest 2019 coverage.

The Pitch: It’s the distant future (but perhaps even closer than we think). A stark opening crawl explains that America has devolved into a war zone. A highly addictive drug known as Hype is on the streets, and has turned men, women, boys, and girls into violent mutants who will stop at nothing to get their next fix. On a typical Friday afternoon, a group of older, grizzled Vietnam and Korean war veterans led by Fred (Stephen Lang) descends upon their local VFW hall to waste away their afternoon with cheap beer and ridiculous amounts of whiskey, as they’ve done countless times before. Today is different, though: In addition to welcoming in a younger soldier (Tom Williamson), fresh from a tour in Afghanistan, they’re also joined by a young woman (Sierra McCormick), who shows up with a stash of Hype stolen from mutant gang leader Boz (Travis Hammer). Naturally, the gang lays siege to the VFW and it’s up to Fred and his comrades—old and new—to simply survive the night.

Happy Hour: VFW is the third film from the newly rebranded Fangoria studios, and is undoubtedly their strongest release to date. Both Satanic Panic and Puppet Master: The Littlest Reich (on which Begos does have an editing credit) look cheap compared to the ultra-stylish VFW. This is pure cinema, utilizing neon, shadow, and 16mm film (or an impressive facsimile thereof) to create a moody, hyperreal aesthetic. Working from a script by Max Brallier and Matthew McArdle—and following up 2019’s Bliss—VFW confirms Joe Begos as trash cinema auteur, with a distinctive visual style that distinguishes VFW from the usual glut of over-lit, low-budget modern genre cinema that clogs up streaming services and Redbox kiosks across the country.

Begos knows what he wants out of his movies, and knows how to get it. There’s nothing pristine in VFW, no calculated “one perfect shot”; Begos’ handheld style gives the film energy, and more importantly, vision. Everything in the film—from the costuming to the red and blue neon lighting and pulsating score—is in the service of looking cool and entertaining an audience that is hungry for this particular style of genre cinema. 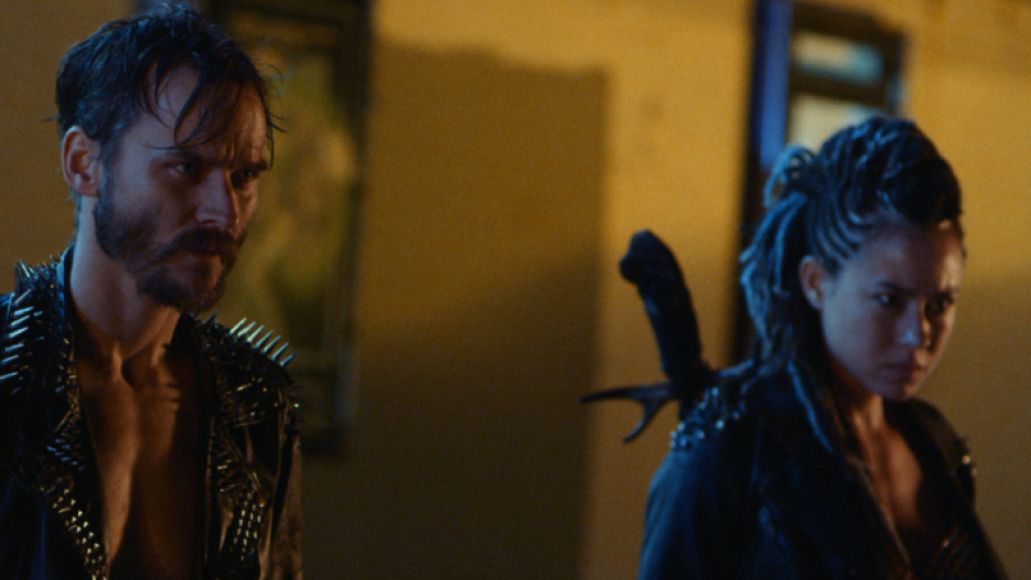 Caught Stealing Tips: A good friend once explained to me that most of what’s in his bar, he stole. From the brand of lightbulbs to where the taps are placed, to the style of barstool, most of his place’s look and feel was influenced by the joints he loved to frequent. It’s a cliche to say that “good artists borrow, great artists steal,” and like so many filmmakers before him, Joe Begos paints in pastiche, collecting ideas and concepts from the genre-blending horror, sci-fi, and action films that lined video store shelves throughout the ‘80s and ‘90s. But it’s his ever-present style, his adoration for this style of cinema, and his confidence that elevates this sort of genre trash to high art, and Begos to an artist.

With VFW, Begos, alongside Brailler and McArdle, cribs from countless westerns and at least two John Carpenter films that feature a single location under siege from the bad guys. The film also features elements of Troma flicks, post-apocalyptic Mad Max-sploitation, and Vietnam revenge flicks like The Exterminator, but there is never a cloying notion of “Do you get that reference?”. Instead, the film seems to be an effort to make good on the promise of countless misleading VHS covers and deliver to audiences—particularly, members of the video store generation—the kind of movie they were promised, but never really got. In other words, it’s not what he steals, but how he presents it. 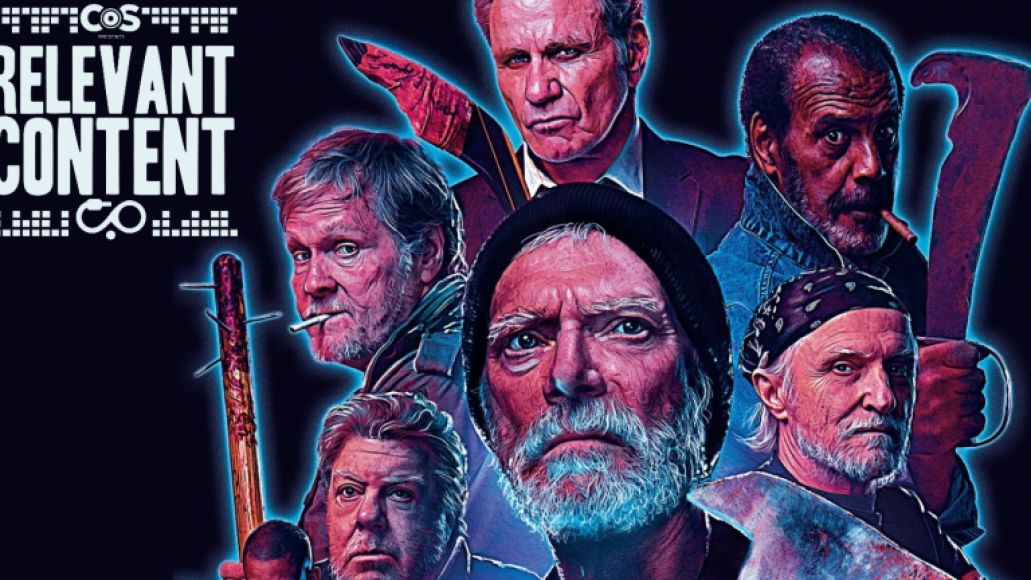 Director Joe Begos and star Stephen Lang join this week’s episode of Relevant Content to discuss drinking games, staying fit, and bar tunes. Be sure to stop by on Wednesday, February 12th at 3 p.m. EST / 12:00 PST via Consequence of Sound Radio on TuneIn.

VFW delivers the goods—tough-guy dialogue, memorable characters, and so much splatter— and audiences will be giddy as adolescents as the gore literally explodes on screen. VFW is also briskly paced, thanks to Begos’ right-hand man and one-man-band Josh Either, who also appears in the film, as well as being credited as sound designer and producer. There’s nary a moment to breathe, or even have time to think too much, so just let the film wash over you.

The Deep End Of A Dive Bar: Now more than ever, genre filmmakers appear to be on a quest for awards and acclaim. And with that, there’s been a slew of awards season-ready genre pictures released over the past few years. On an episode of his Post-Mortem podcast, Mick Garris welcomed this trend after Jordan Peele won an Academy Award for his Get Out screenplay, but Garris also warned that genre—and horror in particular—should never become too civilized. An acolyte of Lloyd Kaufman and Charles Band, Begos seems less concerned with being a part of a club that wouldn’t have him as a member anyway. There’s a punk rock sensibility that rumbles through the film—and most of Begos’ work—that brings VFW a true sense of honesty. 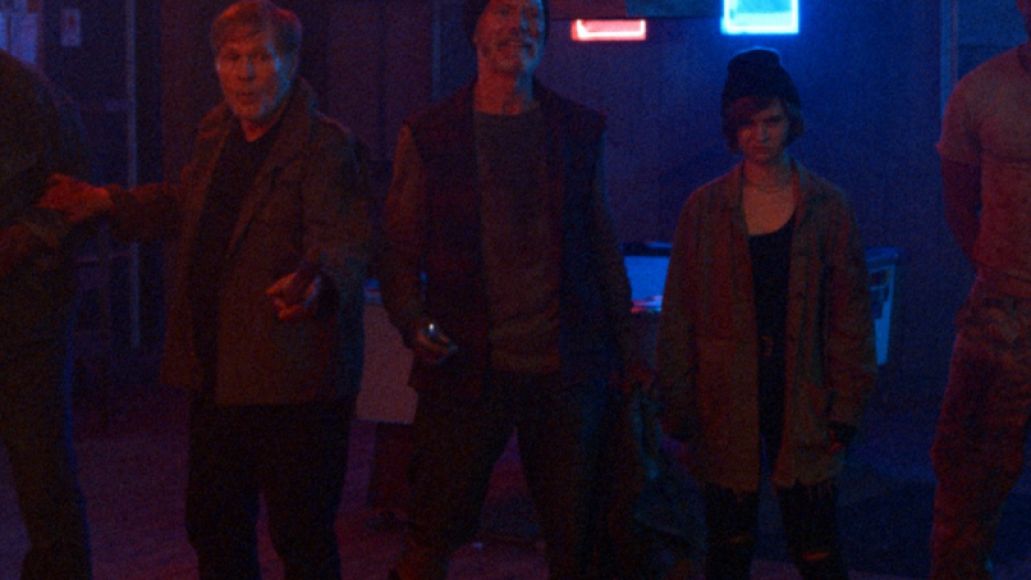 Here Comes A Regular: Barrooms bring people from all walks of life together. There’s an old adage that you never discuss politics or religion in a bar, but the best bars allow for ribald debate between regular customers, new faces, and career bartenders, followed with a shot of whiskey and a laugh to put any heated arguments behind you. The boilerplate plot of VFW is brought to life by a colorful cast of characters, notably the heroic veterans that call the VFW home so many days a week until last call. There’s a camaraderie amongst these men, archetypes that anyone who has wasted their paycheck in a dive on any given afternoon has met: the strong, silent type, the loudmouth wild man, the sleazy salesman, the old pothead.

These characters are painted in broad strokes, but that sense of camaraderie shines through in the vulgar dialogue from scribes Brallier and McArdle.

It’s up to the cast—a sort of Expendables of exploitation cinema character actors—to bring life to these characters: the aforementioned Lang, alongside Fred Williamson (Black Caesar), David Patrick Kelly (The Warriors), and Martin Kove (The Karate Kid). But it’s William Sadler who delivers one of the film’s most memorable performances, all cracked-up excitement in tattered fatigues as he wildly swings a circular saw at the invading horde of mutants. The bad guys, meanwhile, are cribbed from so many post-apocalyptic action-horror hybrids, from Class Of 1984 to Surf Nazi’s Must Die. They’re vile, nasty, and look good in leather. They’re even a little bit sexy. But audiences will still get a perverse pleasure from watching the heroes decimate them in a variety of violent and very bloody ways. 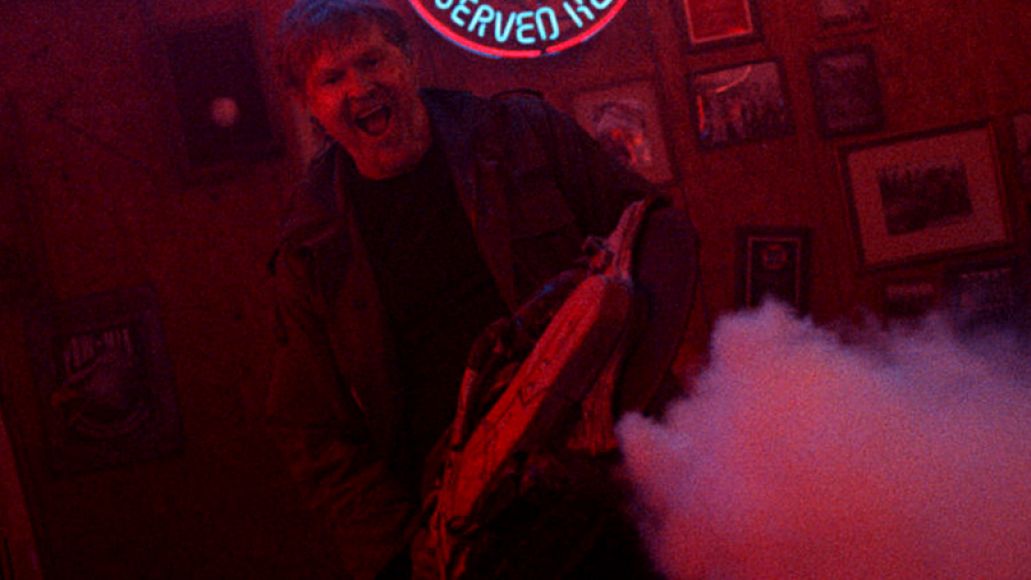 Last Call: VFW is sure to become a cult classic in barrooms that prefer showing movies to sports, and it may even inspire its own drinking game. An action-packed, gory siege picture, VFW is the USA Up All Night second feature you always hoped Rhonda Shear would serve up on Friday or Gilbert Gottfried on Saturday. However, if you do decide to do a shot every time a character takes a shot, proceed with caution, as the hangover will not be as fun as the path to get there.

Where’s It Playing? VFW will have a limited theatrical release and hit VOD on February 14th.