Editor’s Note: The debate over which Led Zeppelin album rocks hardest will probably never end. In that spirit, Jim Shahen cast his vote a year ago today for the band’s sixth album, 1975’s Physical Graffiti, as the record celebrated its 45th anniversary. We revisit his essay today as Physical Graffiti starts its push for 50. Agree with him? Disagree? Let us know which album you think is the definitive Led Zeppelin album.

Two questions for you.

The topic is Led Zeppelin.

First: What words would you use to describe the band?

Second: What is the definitive Led Zeppelin album, the one that best describes what they’re all about?

Remembering the Boston Show That Foretold the Rise of Led Zeppelin

Possible answers: Led Zeppelin II. Solid choice. Hard to pick against an LP that has “Whole Lotta Love”, “Heartbreaker”, “Moby Dick”, a song utilizing a lemon as a sexual euphemism, and some Tolkien-inspired fare. It’s solid, but sadly it’s incorrect.

Led Zeppelin IV. The safest, and arguably the most popular, choice. Has all the staples of classic rock radio, like “Black Dog”, “Rock and Roll”, and “Stairway to Heaven”. You also get the folkie side with “Going to California”, two more brilliant Lord of the Rings homages in “Battle of Evermore” and the trippy “Misty Mountain Hop”, plus it closes out with the swaggering blues metal of “When the Levee Breaks”. Sure, you could play it safe, pick Led Zeppelin IV and feel confident in your decision. But, again, it’s the wrong answer.

Led Zeppelin never did anything small. At its best, the group went for grand, sprawling artistic statements, sometimes to the point of excess. A double album, by its very nature, is exactly that. It lends itself to stylistic detours and sonic experimentation. But in recording one, an artist runs the risk of their ego inspiring boredom and diminishing what could have been a great single LP by tacking on a bunch of filler. But when you’re Led Zeppelin, an act that had already spent half a decade cohesively weaving together strands of hard rock, blues, country-folk, and funk into your sound, a double album is an ideal outlet to cut loose.

And that’s what makes Physical Graffiti so special, so quintessentially Zeppelin. Over the course of 15 tracks, the band showcase the full range of their capabilities, interests, and ambitions.

The swaggering glam blues of “Sick Again” is about some groupies the guys, ahem, knew from Los Angeles. In the hands of a lesser singer, “Boogie with Stu” would be a forgettable Ritchie Valens-indebted, boogeyin’ jam session. Instead, Plant’s squealing admonitions that he “don’t want no tutti-frutti, no lollipop, come on baby just rock” make it one of the highlights of the LP’s final side. And there are a pair of tracks rooted in metaphor that put the earlier referenced “The Lemon Song” to shame, musically and lyrically.

First is the opening track of Physical Graffiti, “Custard Pie”. John Paul Jones mimics Page’s grimy lick on the electric clavinet, providing the ideal backdrop for Plant to thirstily entreat some unsatisfied mama to ditch her man and allow him to “chew on a piece of your custard pie.” Like so much of the band’s work, it’s rooted in blues tropes (in this case, that of the backdoor man), but whereas songs like “The Lemon Song” or “Since I’ve Been Loving You” are relatively formalist in terms of adhering to blues constructs, it’s on “Custard Pie” that Zeppelin really took their blues background and turned it into something uniquely their own.

Zeppelin takes this funkier spin on the blues even further just a handful of songs later, resulting in what is this writer’s favorite track on the album. “Trampled Under Foot” takes its lyrical concept from Robert Johnson’s “Terraplane Blues” and warps it into something wild. Jones is back on the clavinet. Drawing inspiration from Stevie Wonder’s “Superstition”, he plays some frenetic, red-hot funk. It’s the foundation of the song, accentuated by Page’s wah-wah-filtered fretwork. Over the top of that, Plant gloriously preens and leers and drives the car parts-as-sexual-metaphor theme as far as he can.

While Physical Graffiti is a showcase for Led Zeppelin’s genre-repurposing skills, it’s also home to their finest interpretation of the blues with “In My Time of Dying”. The piece starts on a foreboding note and slowly builds tension with its acoustic country blues deathbed lamentations. Then the tension explodes when the bombastic heavy blues-rock kicks in, and the song’s narrator is finally facing his death. Clocking in at 11 minutes, “In My Time of Dying” is sweeping, dramatic, and powerful, and one of the boldest musical moments in the group’s career.

Just on the basis of what’s been mentioned so far, the case for Physical Graffiti as THE Led Zeppelin album is nearly made. The band refined its hypersexual, riff-rock and took it to new levels. On “Houses of the Holy” and “Down by the Seaside”, Page and Plant reveal a knack and appreciation for classic pop hooks and structures. All that’s really needed is the inclusion of one of Zeppelin’s definitive hits to bring this answer on home. And a double LP that’s gone 16 x platinum probably has one of those, right?

Physical Graffiti has “Kashmir”. There’s not really anything you can say about “Kashmir” in 2020 that hasn’t already been said in the past 45 years, but let’s give it a shot. In the beginning of this, the words “stylistic detours,” “sonic experimentation,” and “grand, sprawling artistic statements” were used. The operatic sweep of “Kashmir”, from Page’s droning riff to the lush string and horn orchestration and the varying rhythmic structures of the song, is all of that. “Kashmir” is swirling and mysterious, reliant on un-Zeppelin-like instrumentation and arrangements for its hypnotic brilliance.

It’s deeply embedded in the pop culture landscape, serving as a punchline to a Clooney-Pitt-Damon gag in Ocean’s 12 and re-entering the music charts when Puff Daddy sampled it for his hit 1998 single “Come With Me”. In 2014, the live take from Zeppelin’s 2007 reunion show won the band its first Grammy. For 45 years, this song has enchanted and endured, serving as an eight-minute representation of the mystical aura and power that are staples of the group’s mythology.

By pretty much any metric — critical, commercial, or artistically — “Kashmir” is a grand triumph, a crown jewel in the band’s catalog.

And there’s no better place for that jewel to be nestled than in the middle of the rock legends’ crowning achievement and best work, Physical Graffiti.

Pick up a copy of Physical Graffiti here… 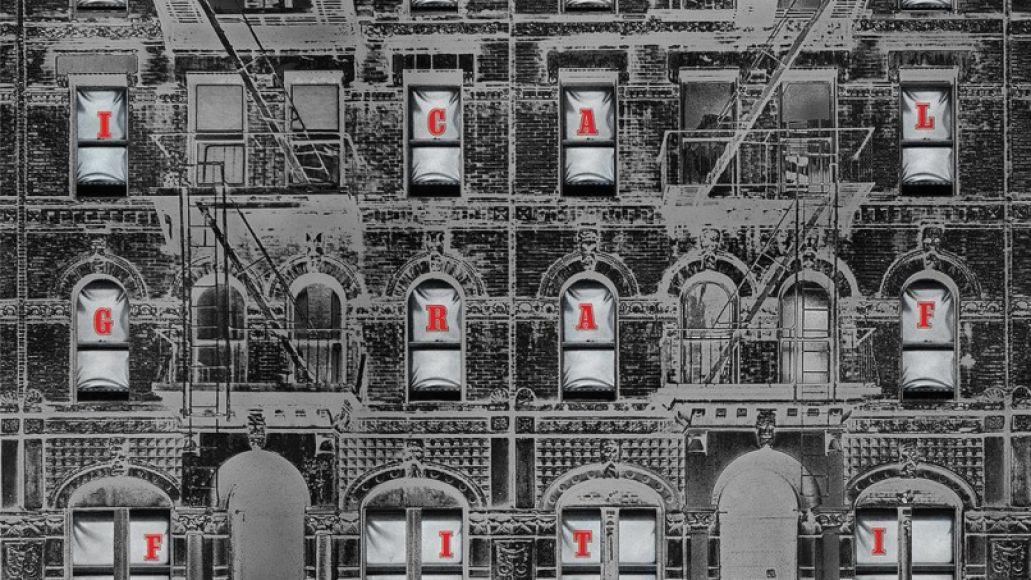