When I call Brooklyn’s fun punk trio THICK, I have no clue that their YouTube video for their new single, “Mansplain”, is going viral, in part, thanks to pissed-off men. It’s not necessarily unexpected for people to get offended by THICK; men, especially in punk, tend to take it personally when powerful, unapologetic women have a platform. This is nothing new for THICK. The band’s 2019 self-titled EP was full of fast-paced tracks with abrasive yells and confrontational lyrics, including a song titled “Your Mom”.

“I knew the comments were gonna go in this direction, and I had been emotionally preparing myself for quite some time,” Nikki Sisti (guitar, vocals) says of the “Mansplain” video, “but it definitely exceeded my expectations.” Her bandmates — Kate Black (bass, vocals, guitar) and Shari Page (drums, vocals) — agree, and they repeatedly make the disclaimer that they don’t give that much of a fuck, and they laugh. It’s very much this complex sisterhood that is encapsulated in their music — a reckoning with serious turmoils, but against a playful backdrop of catchy riffs and fun wordplay (“Fake news/ Send nudes!”).

It all comes together to form an imperfect portrait of hope on their debut album, 5 Years Behind. Things are messy, but THICK are here to show us the light that persists through the darkness and to remind us that we still have community and solidarity.

We spoke with the trio about Brooklyn, punk music, and annoying men.

On Working on a New Album 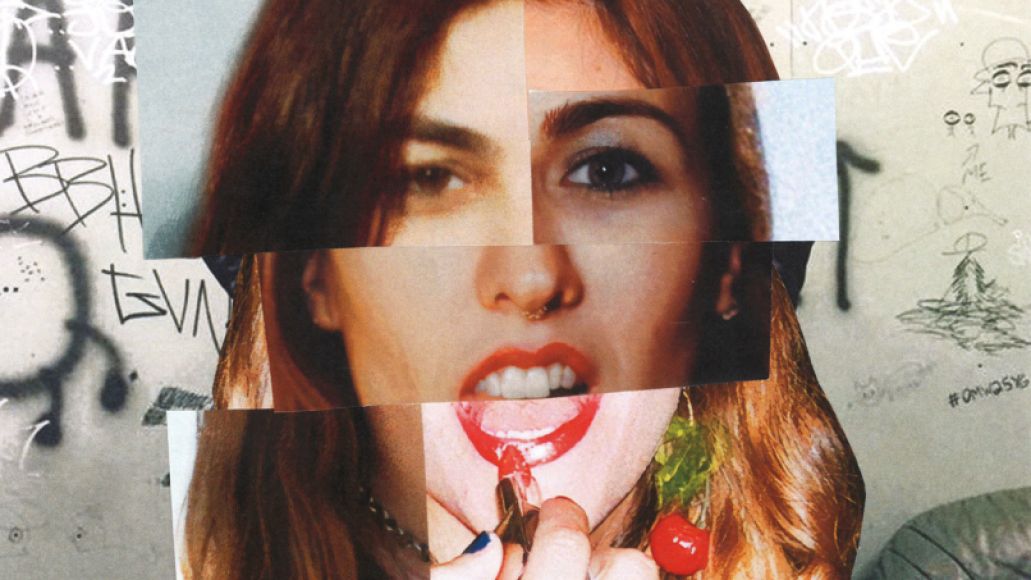 Kate Black: I thought it was a really amazing process. It was the longest we’ve ever spent in the studio together. One of the best learning experiences was having more time to actually work out the kinks in songs and making sure we’re really thinking about all of the melodies and the harmonies and making any last-minute adjustments. Which is a luxury we’ve never really had before, so that was awesome.

Nikki Sisti: Yeah, I agree. It was nice working on these songs for so long because we could be like, “Oh, that part doesn’t really make sense. Let’s change that.” It was intimidating, but it was fun at the same time to take it to a different level.

Shari Page: Yeah, I totally agree. I feel like we were able for the first time to be our own producers in a sense and just totally rearrange parts and bring any ideas to the table.

On Being Influenced by Brooklyn and Punk 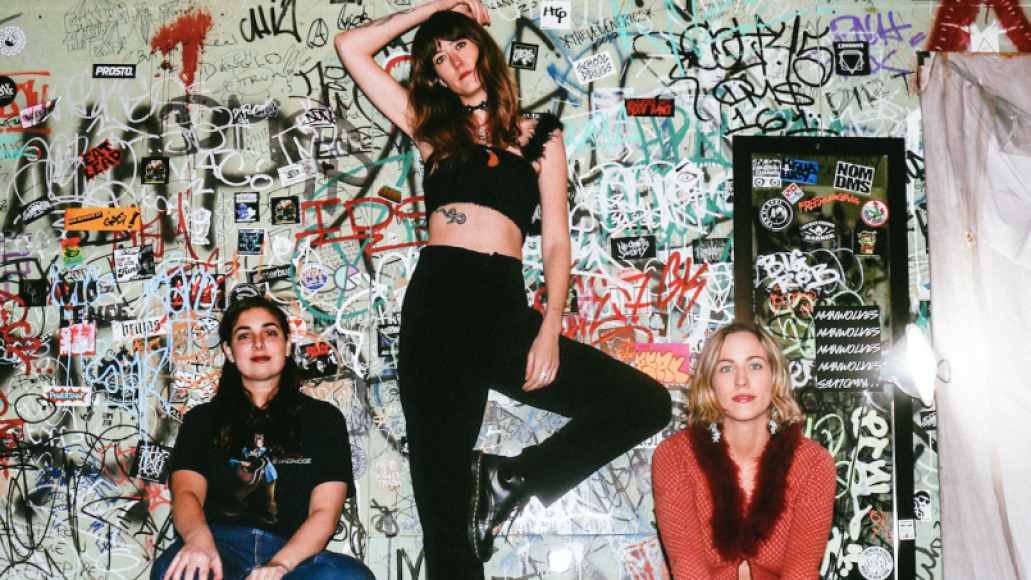 Nikki: You’re always affected by where you live, where you grow. I’ve been here for almost eight years, so I’ve definitely grown a lot here. But I want to say that we all had this thing in us, and we probably would’ve written this style regardless of where we base ourselves.

Kate: I agree. I think that, if anything, it probably gave us a bit of grit. A little bit of a chip on your shoulder, which you get from a lot of New York bands because it’s hard to break through the clutter. You’re kind of dealing with a lot of chaos around you at all times in New York City. I think there is a little bit of an element. We sound kind of like a West Coast band, but from my perspective at least, I think you can tell we’re from New York, not from LA.

Kate: I think the current state of punk is interesting because at this point punk encompasses so many different types of backgrounds that I feel like you have to add four adjectives to get any real comprehension of what a band sounds like. It shifted more into an ethos and a mindset and a sense of anti-establishment or just wanting to be vocal about something you care about, whether in a positive or negative way. It’s so hard to classify it, and I feel like that’s where you get a lot of the influences from different decades. You’ve got some bands that still sound like ’80s DC punk, and you’ve got things that are more along The Stooges. And it’s all kind of categorized in the same way, which is cool because it also creates an opportunity to make things that are unique and referential to things we loved before but not necessarily a copy and paste.

Shari: I love classic rock, dad rock, ’60s/’70s music. I feel like that style has always continued, and even with the New York music scene right now, so many bands still play within that style of music. I’ve been listening to a ton of random soul/Motown bands, and I think of how I can bring that drum style to THICK’s punk style. I think everyone kind of finds that in-between.

On Trying to Bring Live Show Energy into the Studio

Nikki: I don’t know if it’s a pressure, but I wanted our album to capture [our live show] energy. It was something that I wanted to translate into our recording. It is a lot harder to do in a studio, I must say.

Kate: It’s comical at times when you’re standing in a booth, and you’re in a professional studio and everyone there is professional as well. You’re standing there screaming these lyrics at a microphone, and that can be really funny at times. Sometimes, I pretend that I’m playing bass, or just move around, so that it feels a little more frenetic and you get a little more energy into your voice even. It’s very easy to condense that emotion when you’re standing in a studio setting.

Shari: My secret rule with the studio that I feel like I haven’t even talked about is when we’re doing track by track, it’s something deep down I would only agree to do knowing it would sound live. It comes from practicing a shit ton over and over as a band, but it’s this whole thing where any band can go in playing live in the studio, but it’s different. It’s more challenging to do a track by track. The way to get a natural live sound is to have the energy there, no matter how you’re recording.

Nikki: We’re lucky in Brooklyn. It doesn’t happen as often as it used to happen. I think there was still some guy who was like explaining a pedal and how I could change it to a high into a low and a mid and a treble and I’m like … I don’t get mad. I’m not angry at them for trying to explain. It’s kind of like, “Ugh, man, this is so frustrating.” I just have to go with it. I let it go.

Kate: I don’t really appreciate being spoken down to in any context, but I do find it frustrating when someone is talking to you in a professional setting where you’re setting up on stage or you’re in the middle of the set and they’re speaking over a loudspeaker saying things that show that they’re making the assumption that you don’t know what you’re doing and that you haven’t been in a band for however many years. And that you don’t understand the difference between active pickup and just a bass that has batteries. Basically, what it’s communicating is: I don’t think you know enough to be here, or you can’t possibly understand as much as I do. We definitely are lucky in Brooklyn; I don’t think it happens as much and we have a really, really strong community, but it definitely happens at times, and we’ve had some crazy stuff in other cities. Someone was making motions at Shari’s drums and stormed the stage.

Shari: I had to shove him off and no one noticed. No one called security. The one thing that was the saddest part to me was that the woman who organized the festival — which was a female-fronted festival — apologized to me and said, “I’m so sorry, but I’m also really surprised more of this didn’t happen today.” And honestly, that’s what stuck with me — the fact that that’s part of the expectation of being a woman in music, and that’s part of the expectation of how people will treat you.

Nikki: I played a show once where a guy got on stage in the middle of the set and came up to me and started messing around with my amp. Granted, he was on drugs, but like no one does that. Well, actually I had two guys do that. I love that Kate expresses her frustration. That’s something that I would like to do more. I don’t know what my deal is. I probably rationalize it in my head, but I feel the same anger that Kate feels. I just want to express it more in the moment, but then I end up rationalizing it, thinking about, “Oh you know what? That guy probably doesn’t know.” That’s my deal in life, though — I always rationalize too much. 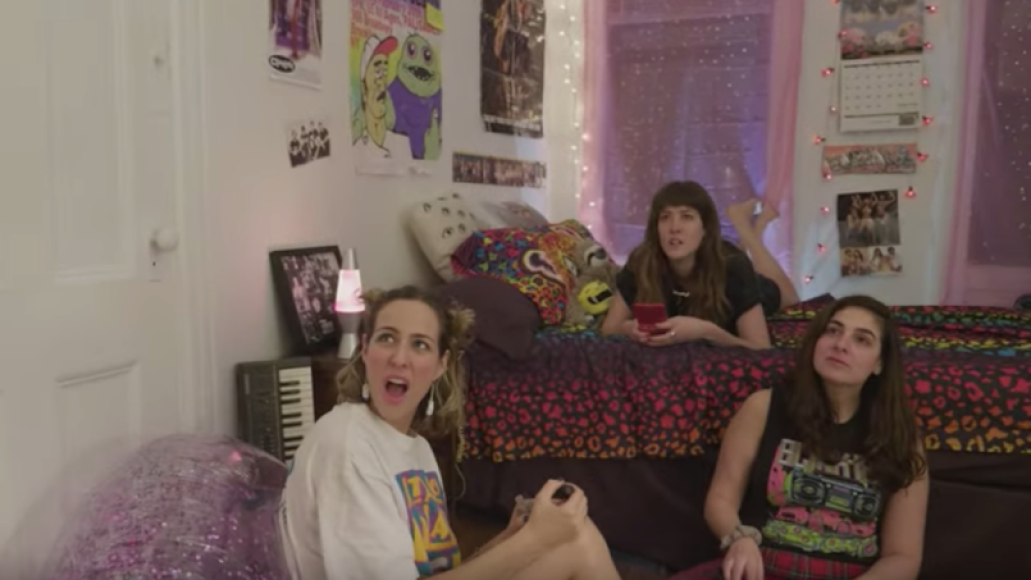 THICK in video for “Bumming Me Out”

Shari: When I was 20, I was bringing my cymbals in, and they were like, “Oh, you’re trying to carry your boyfriend’s drums inside?” So, I feel like over the years it’s gotten a bit better. Especially being around people that are like, “That’s not cool, why would you say that?” And it’s how you go about it. Like if we pulled up one of the comments on YouTube and talked to one of those people and were like, “Okay, so why do you feel that way? You feel like mansplaining doesn’t exist?” And then they say we’re womansplaining [laughs]. I think overall, it’s just a matter of how you can communicate something but not put someone down. Like, “Oh, let me show you how to turn off the pedal,” like I think you can just ask politely or don’t say anything. There needs to be this sort of in-between.

Nikki: I think the thing is the assumption that we don’t know. That is something that we’re trying to poke fun at and talk about in [our song “Mansplain”]. People were so negative and rude, but like, I don’t give a fuck that I offended all those people.

Nikki: I didn’t read all of the comments; I stopped, so I don’t really know who left them. But I’m assuming a lot of white cis men left them.

Shari: I clicked on some of the profiles, and I just see Pokemon or video games. So I’m like, “All right, who’s this Jim leaving a comment,” and I click on it, and it’s just this dude that plays video games. So you just don’t know because you just play video games in your parents’ basement. You’re not really getting some air. Also, I think people need to respect what someone’s experience was. At the same time, I don’t really give a fuck.

Kate: A lot of the songs — if you read into them — are a little bit more of a realistic spin on either what’s happening in relationships we’ve had or what’s happening in the world around us. At the end of the day, it’s meant to have a hopeful tone. It’s not meant to be depressing and all hands in the air “I give up.” There’s a sense of community in the fact that everyone’s kind of going through the same thing, and it’s affecting a lot of people in a lot of different ways. You can find like-minded people who will help bolster what you’re doing and talk you through how you’re feeling. It’s really just trying to give people who are feeling frustrated a voice and a sense of solidarity in what they’re going through.

5 Years Behind is available 3/6 via Epitaph Records.

Artist of the Month THICK on Brooklyn DIY, Punk Music, and Mansplaining