There’s something startling about watching a man in a movie theatre erupt in a coughing fit, stumble into the lobby, and immediately spread a deadly viral contagion upon a crowd of unsuspecting patrons in line for popcorn and soda. The scene in question is one of the inciting incidents in Wolfgang Petersen’s 1995 thriller Outbreak, but in contemporary times, it plays like a prescient depiction of real-world fears as the COVID-19 virus continues to spread throughout the world.

That real world of anxiety and tension is everywhere in the first half of the film, particularly as screenwriters Laurence Dworet and Robert Roy Pool (adapting from Richard Preston’s novel, The Hot Zone) construct a cause and effect narrative that enables the virus to spread. Following a cold open that establishes the stakes (“100% mortality rate” is a frequent line of dialogue), Outbreak follows the journey of an adorable African monkey that is illegally transported to America, stolen from an animal quarantine by a shaggy-haired Patrick Dempsey, pawned off on a pet store owner, and ultimately released into the wilds of the Palisades, but not before setting off an infection that devastates the small town of Cedar Creek, population 2600.

A lot of the early scenes play like Dworet and Pool are building a narrative based on the red string tableaux frequently seen in crime procedurals. And yet when Dempsey’s Jimbo Scott gets a gloop of monkey spit in the face, or when pet store owner Rudy Alvarez (Daniel Chodos) is scratched, or lab tech Henry Seward (Leland Hayward III) gets a vial of blood to the face, it still elicits a gasp because the implications are so clear. Watching these people board planes full of people or go to the movies is worst, because it plays on the inherent fear that infected people either don’t know the danger they pose…or they simply don’t care about the safety of others.

That’s the true horror of Outbreak and it’s where the film is most successful. The middle section, which finds both the CDC (represented by Rene Russo’s Robby Keough) and the United States of America Medical Research Institute of Infectious Diseases (headed by Dustin Hoffman’s Sam Daniels, but answering to a stern Morgan Freeman and a shadowy Donald Sutherland) putting Cedar Creek on quarantine is rife with paranoia, lack of information, and the omnipresent threat of faceless military and medical technicians.

Once the outbreak becomes airborne in the theatre, the core cast is decked out in hermetically sealed suits for the majority of the film and Petersen gets a lot of mileage playing up the physical distance between individuals and the thematic distance of their humanity. The former is evident in the inability for individuals to touch (in one scene Sam tries to calm Robby, but he can only clumsily stroke her face mask) and extends all the way to one of the film’s many action sequences, which finds a pair of families gunned down while trying to break through a military roadblock.

The thematic distance that accompanies the contagion is all the more horrifying. Outbreak dedicates a surprisingly meaty portion of its middle section to outlining the heartbreak and devastation of Cedar Creek, and the terror that accompanies a town under quarantine from strangers who are more concerned with tests and statistics than people. While Dworet and Pool don’t offer any substantial character development (or names) for any of the residents, Petersen amplifies the horror with shots of armed vehicles roving down empty town streets or residents hiding behind windows baring white flags denoting the presence of illness. There are some heavy handed moments, including an emotionally manipulative scene of an infected mother unable to hug her daughter before she is escorted away to certain death, but this is familiar territory for Petersen when he’s helming disaster films (see also: 2000’s A Perfect Storm and 2006’s Poseidon). 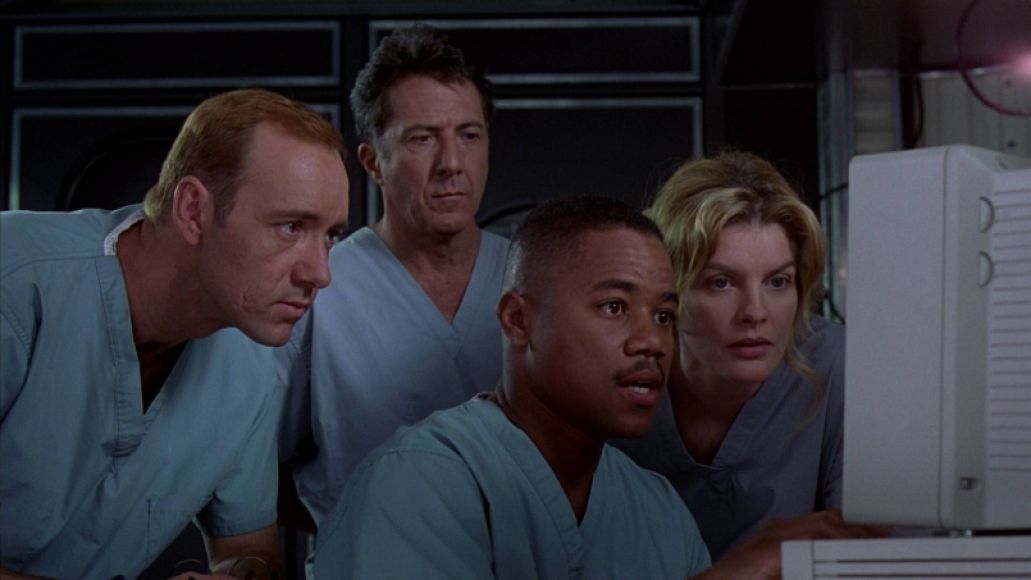 Other obvious “disease movie” tropes are present, including an entirely FX journey through a vent to explain how a seemingly unconnected patient became infected, as well as the obligatory panic over a ripped suit, which occurs not once, but twice, resulting in infections for both Robby and Kevin Spacey’s Casey Schuler. These are all effective, in no small part because the name actors are all incredibly likeable, but also because Peterson knows how to make the smaller intimate moments as impactful as the bombastic action sequences.

The film is less effective, unfortunately, at trusting its audience to remain invested in Cedar Creek’s drama, which results in two grating subplots that become the A-plot in the draggy third act. The foundation of the characters is established early as Hoffman and Russo are positioned as former lovers who are inevitably still attached to each other, while Sutherland’s Major General Donnie McClintock is a hissable villain responsible for the cover-up bombing of the African village in the cold-open. (Sidebar: the casual racism in the depiction of Zaire has not aged well.)

These two plots – the emotionally manipulative love story and the military conspiracy – spiral into a series of bland action sequences that dominate the last act of the film. Sam and Cuba Gooding Jr’s Major Salt go on a ridiculous series of adventures to find a cure to save an infected Robby’s life, and prevent McClintock from bombing Cedar Creek, resulting in an interminably drawn-out conclusion that loses sight of the original film’s premise. Gone is the medical thriller about a viral infection; in its place is a Titanic-esque personal love story caught up in a military action film, complete with helicopter chase scenes and a “tense” game of chicken between a plane and chopper.

It’s unfortunate because the scenes dedicated to the quarantine of Cedar Creek remain incredibly effective and evocative. The erection of barricades, the swarms of uninformed civilians, the cold willingness of those in power to let innocent people die – it cuts a little too close to home. While Steven Soderbergh’s Contagion (2011) is ultimately more successful at capturing the layman’s experience amidst an international crisis, there’s no shortage of terrifying imagery or concerns about the future of humanity in Outbreak.

For audiences seeking a cinematic outlet to ease their anxieties about the real world viral epidemic, it’s likely best to skip Outbreak. For those with a taste for danger, however, stock up on antibacterial soap, wash your hands for 20 seconds and hit play.