Editor’s Note: David Bowie’s career can be examined as a series of transformations … or ch-ch-changes. Young Americans, which came out on March 7th, 1975, remains one of the more abrupt and extreme ones. After starting off the decade in deep space as a pansexual alien messiah, Bowie traded in the glitter and Spiders from Mars for slick suits and Philly soul. In honor of this particular transformation, we revisit Ashley Naftule’s anniversary article, which first ran March 6th, 2020.

When David Bowie was 15, he underwent his first transformation.

Unlike the many others he would undergo throughout his life, this one wasn’t planned. Getting into a fight with a friend over a girl they were both interested in, Bowie got socked in his left eye — a punch that scratched his eyeball and paralyzed the muscles that contract the iris. It was that swift jab that gave Bowie his iconic mismatched eyes: with his left eye permanently dilated, it created the illusion that he had different-colored eyes. It gave him an unearthly appearance, like he was a shape-shifter caught in mid-transformation or a body-snatcher who forgot that his victim had a matching set of eyes.

Blondie’s Chris Stein on Sharing Joints With Bowie and Jagger

It’s hard not to think about Bowie’s eyes while listening to Young Americans. Released in 1975, it was his ninth studio album and his first foray into a whole new style and identity. After starting off the decade in deep space as a pansexual alien messiah, Bowie traded in the glitter and Spiders From Mars for slick suits and Philly soul. Cutting the record on breaks during his Diamond Dogs tour at Sigma Sound Studios in Philadelphia, the album found recent US transplant Bowie indulging his love for funk and soul music. It’s a blue-eyed soul album that plays matchmaker between Bowie’s artsy rocker tendencies and the warm earnestness of soul and R&B. The union between them is an uneasy one, but that’s part of the charm of Young Americans — like Bowie’s eyes, it’s the mismatch between musical styles that compels us and holds our attention.

The naturally blue-eyed Bowie didn’t call Young Americans a blue-eyed soul record; instead, he called it his plastic soul album. “It’s the squashed remains of ethnic music as it survives in the age of Muzak, written and sung by a white limey,” Bowie said in a 1976 Playboy interview. To paraphrase The Graduate: there’s a great future in plastics. Bowie saw that future long before Mick Jagger started singing in Central Park after dark and Rod Stewart asked all the sugars to let him know.

Bowie was far from the first to strike gold by milking those “squashed remains” for all their worth. The English rock scene he emerged from was a byproduct of white rockers trying to appropriate the blues, failing at it, and creating something interesting and different in their attempts to do so. His Gallic counterpart in creative restlessness and infamy, Serge Gainsbourg, made his first major breakaway from the French chanson music he was known for by pivoting to black music, which, in Serge’s case, meant “sampling” (i.e. lifting music wholesale) rhythms off of Nigerian drummer Babatunde Olatunji’s Drums of Passion LP for his 1964 record, Percussion, creating the world’s first Eurotrash ethnobeat album.

However, what set Young Americans apart from these other efforts was Bowie’s desire to ingratiate himself within the R&B community. Bowie initially tried booking Philly soul session players for the record, but found they were all too busy working on future Gamble and Huff classics to lock them down. This ended up being a blessing in disguise, as it led him to working with guitarist Carlos Alomar, starting a creative partnership that would last all the way up to 2003’s Reality. Alomar cut his teeth touring for eight months in James Brown’s live band, worked with The O’Jays and The Ohio Players, and even played as part of The Apollo Theatre’s house band. Bowie couldn’t have found someone with a better pedigree in funk, soul, and R&B who shared his experimental sensibilities if he tried.

Alomar also brought with him several other musicians who would prove to be crucial to the record: singer Robin Clark, Alomar’s Wife, who (along with Ava Cherry) provided most of the soaring backing vocals on Young Americans; drummer Dennis Davis, who only played on “Across the Universe” and “Fame” for this record but would go on to be Bowie’s powerhouse percussion man from Station to Station through Scary Monsters; and Luther Vandross, Alomar’s best friend, whose singing impressed Bowie so deeply that Vandross became the record’s vocal arranger.

Young Americans was a star-making moment for Vandross, and he rose to the occasion. The title track is a marvelous display of limber, ecstatic voices twisting around Bowie’s lead; Vandross, Cherry, and Clark’s voices, combined with that irresistible saxophone squeal, create the perfect sandbox for Bowie’s evocative lyrics. He doesn’t sound like a bandleader or star on “Young Americans”; he sounds like a man who can’t believe his luck that he gets to sing this song and nobody’s kicked him off the Soul Train yet.

Bowie would also use one of Vandross’ songs on the record. Originally titled “Funky Music”, it became “Fascination” on the record; it’s the closest Bowie’s ever come to cutting a straight-on disco song.

Young Americans is a fairly smooth-sounding record, which is all the more fascinating considering the fraught circumstances of its creation. At the time of recording, Bowie was already deep in the throes of cocaine addiction. Bowie’s habit set the tempo for the recording process:“He couldn’t really get his creative thing going until two or three in the morning, until the cocaine arrived,” pianist Mike Garson said of the sessions. The drug habit also estranged Bowie from his manager, Tony Defries, and the two would get into heated disputes over money (it’s been oft-rumored that “Fame” was meant to be a fuck-off song aimed at Defries).

Bowie was also spending time with John Lennon in the middle of Lennon’s “lost weekend” phase in which the ex-Beatle was estranged from Yoko Ono and wrestling to grips with his own demons. The Beatle guests on two of the songs on the record: Lennon plays guitar on a cover of “Across the Universe” (the song’s only memorable element is Bowie turning the Jai Guru Deva Om chants into instrumental vamps) and goes buck wild on the backing vocals for “Fame”, shooting up and down his register from falsetto to Barry White bass levels.

While the record is best-known for its bookending singles, “Win” is the album’s masterstroke. It’s the lushest composition on the record — the closest Young Americans gets to the velvety, out-of-body smoothness of the Delfonics. Bowie’s voice practically wafts through the speakers like smoke, more of a post-coital cigarette exhalation than a soulman’s croon, while Cherry and Clark massage our eardrums with girl group “oooooh-oooohs” that sound like they’re trying to escape earth’s orbit. If Hall & Oates and Steely Dan never existed, Bowie’s “Win” would be all you need to inspire the existence of yacht rock.

Young Americans is Bowie’s missing link album, a rare moment where the snake is caught in the act of shedding his skin. Listening to it, you can hear the seeds for Station To Station, the Berlin albums, and Let’s Dance being planted. In his past work, you got the sense of a progression from his folkier records up until his full-on glam records — that each of these albums is just another link in a long chain — but Young Americans is his first abrupt stylistic shift, the moment where Bowie drops his aesthetic and sonic identity and tries on something entirely new. The fact that some of the songs on Young Americans come off a little staid (like “Somebody Up There Likes Me” and  “Can You Hear Me?”) can be chalked up to Bowie not quite mastering the art of the quick-change yet.

Young Americans is at its most captivating in its more eccentric cuts — the sneering cynicism of “Fame”, the floating-in-astral-space bliss of “Win” — where the soul man suit doesn’t quite fit right yet. That’s where its plastic soul shines brightest.

Pick up a copy of Young Americans here… 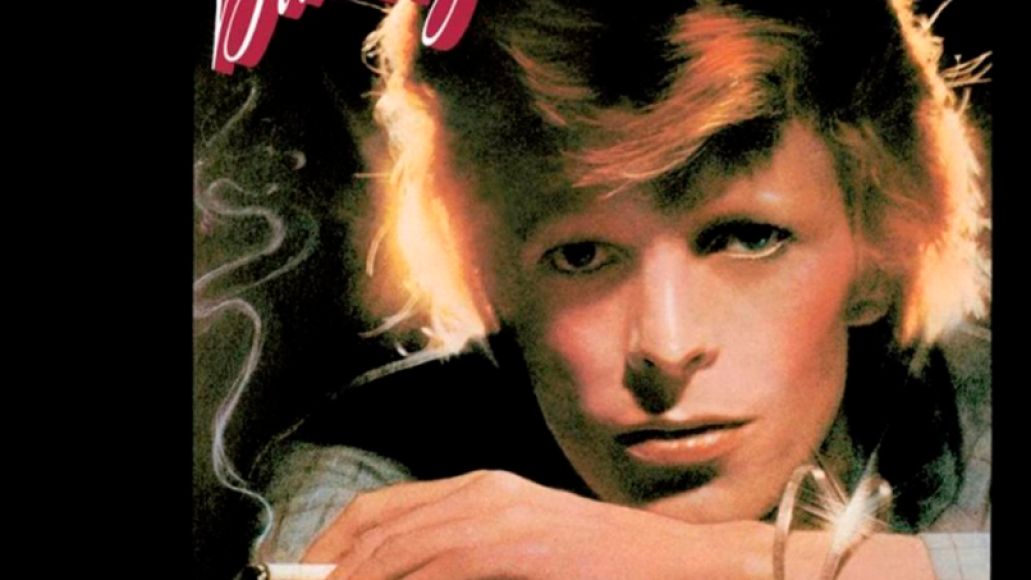