The Pitch: Two elven brothers with Smurf skin, Ian (Tom Holland) and Barley (Chris Pratt), are looking to bring their dead father back to life. Ian and Barley are gifted a staff for Ian’s 16th birthday. It’s a secret present from their father, one that had been hiding in the attic for years. And the rest you know from the trailer: Gnarly vans, kid story hodgepodge, nostalgic leanings for a particularly metal-headed set of people. The boys go on the proverbial adventure to find a magic gem (with grave implications… always with the grave implications) to complete their father, who re-appears as a pair of sentient Kohl’s slacks as a result of some resurrection spell going hinky.

Barley has a huge Barney Gumble chin, and is always smirking. He’s obsessed with the magic of yore, putting out a stoner brother vibe. On the other end, Ian looks precisely like Holland’s geeky character from last year’s Spies in Disguise, if someone messed with the tint on the TV to turn him blue. (Parents from the pre-HDTV era will see it.) Always stammering. Hopeful for just one more day with dad. The boys just want their old man back, and in Onward, magic may make it possible.

Where a story like this could head for some sort of Mary Shelley-esque nightmare of ethics and letting go, director Dan Scanlon and his co-writers Jason Headley and Keith Bunin flick a wrist and treat the premise like Tolkien wrote a very special episode of Family Ties. Magical realism meets daddy issues in the well-meaning but frankly mushy and messy Onward, a sort of corner-case misfire from animation powerhouse Pixar. 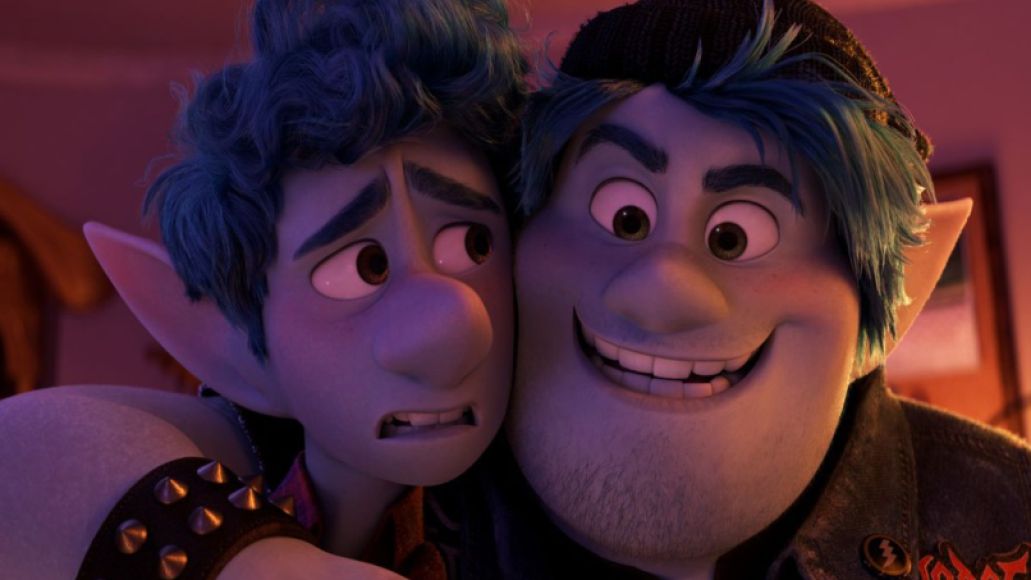 Pixar Dust: Onward pitches a postmodern universe where the pomp and gaiety of a Magic the Gathering deck is paired with the banal urban sprawl of a Midwestern suburb. Now, Pixar knows production quality. The set decoration, ideation, stuff-ification or whatever, is top shelf. High budget animation filling the frame with neat-o envisioning of a world where mermaids and unicorns and goat-legged fellows, but they’re all just drab and mundane.

Sounds funny, right? Expressways filled with slightly surreal cars, racing at a clip. A high school occupied with oval-faced goblins, monsters, and other kinds of teenage beasts. A gang of pixies occupy motorcycles and ride around looking for fights. The leather jackets, serrated teeth, and glittery dust must have taken months to render.

Onward is painted in retro-suburban chic, marked with fluorescent lighting schemes, buzzing neon signs, and other municipalities. Just magical and ironic. And that’s the joke. Scanlon keenly envisions a Michigan suburb where the Chuck-E-Cheese is run by a retired monster slayer, who also happens to be a talking lion with wings. (Her name is Corey, and she’s played by Octavia Spencer, who’s both game and a bright spot of the film.)

But it’s just not very clever. Again, texturally sound, but never anything but predictably designed. And perhaps the story, and the characters, are what fails to enchant.

Ranking: Every Disney Song From Worst to Best

Ranking: Every Pixar Movie from Worst to Best

Role Playing Game: But to relay a Conan O’Brien anecdote from one of his podcasts, jokes are just jokes if you don’t have good characters telling them. O’Brien brought this up when talking about coming on to The Simpsons, prepared to be a joke factory, before James L. Brooks reminded him constantly that, in order for the humor to work, you had to care just a little bit about Homer and Marge and Lisa and Bart.

As characters, Barley and Ian are well, what’s a kid-friendly version of the word “crappy”? Their motivation and longing are both simple: Dad. One more day. And that drives the adventure, while Scanlon and crew sprinkle plot and character beats with a heavy hand. With an over-eager Holland groaning out lines, Ian is the kind of nerd cliché that has been seen a billion times in bad ‘80s teen comedies. He’s neither likable nor awful; he’s just a bit wimpy and, worse, uninteresting. Longing and loss are valuable feelings, but they’re not explored strongly enough. 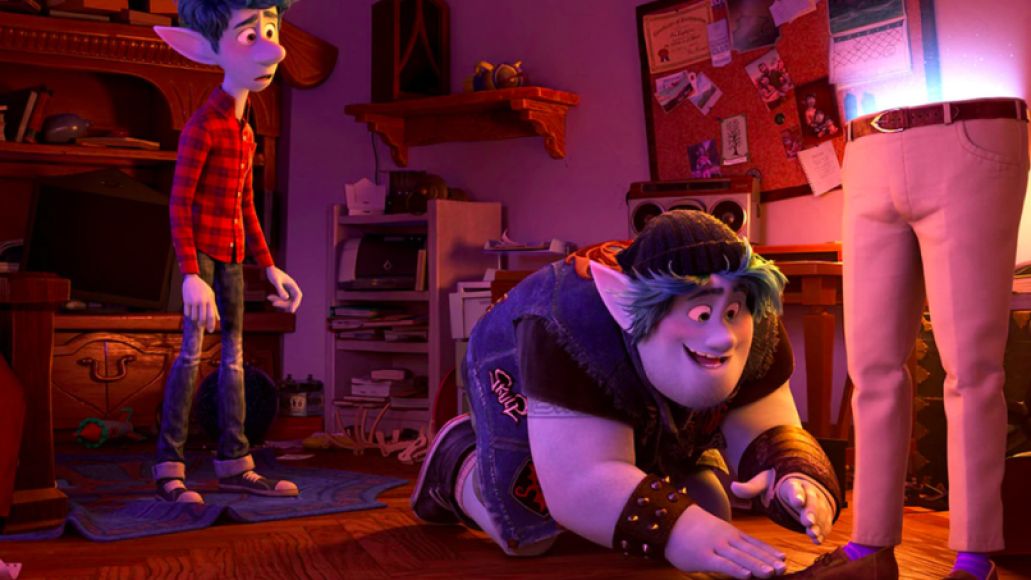 And Barley is just another variant on the same Andy Dwyer shtick that Pratt has been doing for the last decade: He’s a lunk, and by now, a bit overbearing. Pratt’s normally great at selling a redeemable meathead, but when he’s near strong-arming his little brother into forceful hijinks, you almost want to scream “leave him alone!” at the screen. We get it, you’re the over-bearing comedy bro cliché. You’re Bluto sans alcoholism. The headache of a million dungeon masters. Andy Dwyer without the fun.

Ian and Barley exist to obsess and chase this dream of a paternal figure. (Which is totally at the cost of remembering they have a loving, doting mother. Which is a move that wastes the great casting of Julia Louis-Dreyfus casting her as the boys’ ignored mother.) Ian and Barley’s interests are as deep as a level 1 spell. No? Okay, it’s just got-damn tiring. 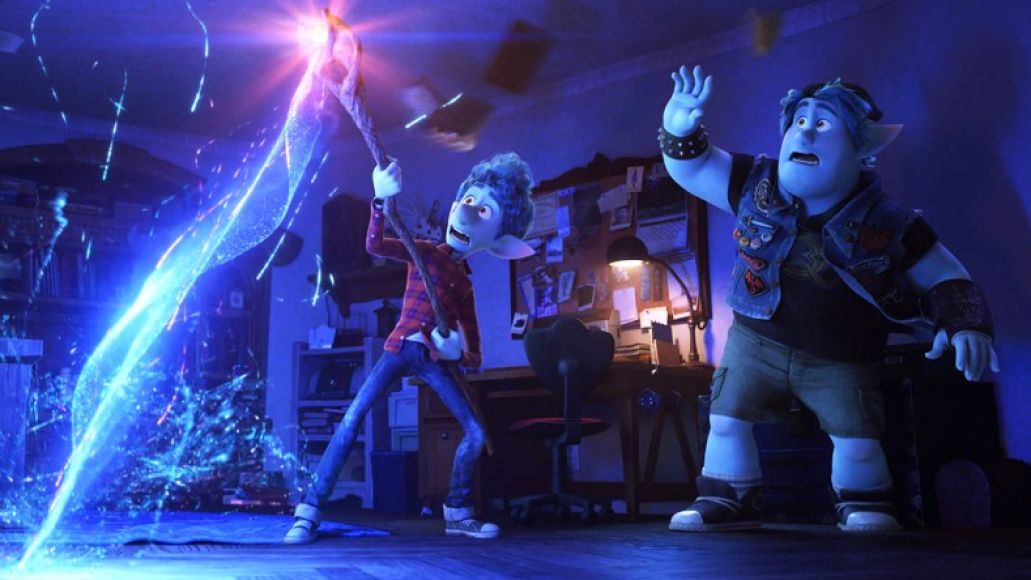 Verdict: Finding Nemo had the benefit of Albert Brooks’ stuttering neuroses and Andrew Stanton’s generous writing. The Toy Story movies benefit from Tom Hanks, Tim Allen, and an endless supply of writers generating all-ages questions about existence under the guise of playing with toys. In comparison to Pixar’s best, Onward’s blue dudes have little to offer beyond obsessive mugging.

Will the kids care? Perhaps not; there’s enough pizazz to keep eyes peeled for 100 minutes. (Hey, look at that, a giant floating Cheeto!) But when the leads are drawn this terribly thin, and Onward is so hopelessly focused on the dad narrative that it can’t help but ignore its creativity in favor of mawkish afternoon special, the product stinks of a bad Amblin ripoff.