Even the ongoing spread of COVID-19 can’t stop the concerts in support of Bernie Sanders. On Monday night, as voters in Arizona, Florida, Illinois, and Ohio prepared to cast their primary votes, the Vermont senator’s campaign held a get-out-the-vote event fit for the age of social distancing: an audience-less “digital rally” featuring musical performances and testimonials from Neil Young and Jim James. It was the latest twist in a string of high-profile musical endorsements for Sanders’ presidential campaign, which has earned crossover headlines during the primary season for shows from Vampire Weekend to Public Enemy to The Strokes.

In fact, if Bernie rallies were a music festival, that would be one damn impressive festival lineup: 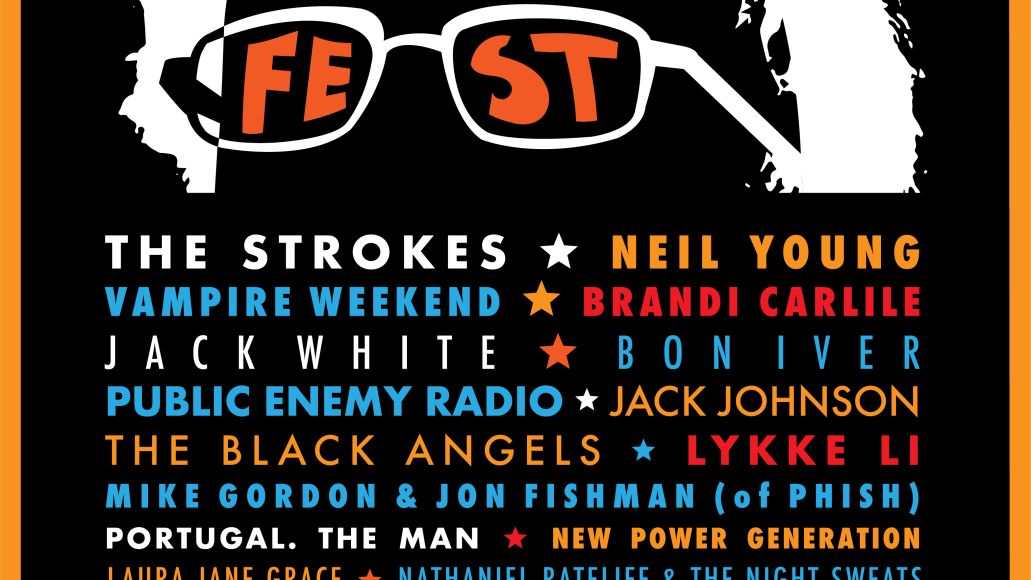 It’s also an impressive audible from the Sanders team, including Caleb Wilson, the campaign’s National Advance Manager and Talent Outreach Coordinator. Despite the breakneck schedule of primary season, Wilson found time to dial in for a chat last week, in which he shared his thoughts on campaign life, the evolution of political surrogates, and the policy reasons behind Sanders’ grassroots support from artists big and small.

Before his time with the Sanders campaign, Wilson’s biggest involvement in politics came during his enrollment at the University of Arizona.

“I was in student government,” he said. “I was our Special Events Executive Director; basically, it was under our purview to bring in concerts to entertain the student body. That was sort of my first window into the power of production and live music and putting that on for entertainment purposes.”

After graduation, Wilson headed to Los Angeles, where he worked in film and television production. In 2016, he received the concert tickets that would change his life.

“In 2016, my dad, who’s a big labor organizer from the Northeast and actually co-founded Labor for Bernie, hit me up and was like, ‘Hey man, the Red Hot Chili Peppers are doing a benefit concert for Bernie at the ACE Theatre downtown. I think I can get you two tickets as a birthday present,’” Wilson said. “I was like, ‘Dad, that is the coolest birthday present you’ve ever brought to my attention. Absolutely.’ Sure enough, a couple of days later, I get a call from [Sanders 2016 Political Outreach Director] Nick Carter. He goes, ‘Hey Caleb, your dad says you want to volunteer,’ and I was like, ‘Ah, there it is. There’s the bait and switch.’”

“[After the show] Nick came up to me and was like, ‘Hey man, great job tonight. Do you want to get more involved?’ And I said, ‘Well, what do you have in mind?’ And he’s like, ‘Can you be on a plane in 10 hours?’ So, 10 hours later, I flew to Kansas City and that was sort of the beginning of the end.”

In 2020, Wilson wears two hats within the campaign: in addition to acting as an advance manager for Sanders’ many appearances and rallies across the nation, he also works the talent outreach coordinator, a role tasked with connecting sympathetic artists with the campaign apparatus. Wilson is quick to credit the diverse talents of his teammates — including veteran politico Shasti Conrad, audio entrepreneur Chris Kantrowicz, and pedigreed singer-songwriter Harper Simon — with aiding the campaign’s committed approach to connecting with artists. Those efforts began months ago, in meetings with some of the music world’s biggest talent management firms.

“We did roundtable meetings early on in this campaign with Paradigm, with Monotone, with Red Light Management, and we put faces to the names,” Wilson said. “We said to these agents and these managers and these publicists, ‘Music is a mandate of this campaign.’”

Part of the appeal to artists may come from the senator’s own musical background: when he was mayor of Burlington, VT, Sanders recorded a folk album called We Shall Overcome and worked with his wife, Jane, on the opening of 242 Main, an all-ages DIY venue created in collaboration with the city’s young adults. That venue would go on to host acts including Fugazi, Operation Ivy, and Misfits, making Sanders the only presidential candidate to ever run a punk club. Wilson sees that same kind of spirit reflected in the campaign’s current approach to musical outreach.

“I think the progressive movement, and Bernie as a candidate, goes hand-in-hand with that DIY touring culture,” he said.

“It’s on the back of advance, and our site leads to work their local resources, to reach out to music venues like the Fox Theater or the Music Box, and basically say, ‘Okay, who are your local bands, who are you guys booking, do you guys have somebody who’s playing Saturday that might be in town Friday?’ After a few conversations, you can typically find a group of really enthusiastic artists that are like, ‘Yeah, we want to play a Bernie rally. We love Bernie; we love the movement. Whatever we can do to help.’”

According to Wilson, this local outreach approach even applies to the music world’s biggest names, as well. At one of the campaign’s most memorable fall rallies, Michigan congresswoman Rashida Tlaib endorsed Sanders with the help of Detroit’s own Jack White. In our conversation, Wilson revealed that White’s appearance was the result of a good old-fashioned cold call.

“Half the time, we’re blindfolded throwing darts at a dartboard, right? We don’t know if an artist is sympathetic or not, but the worst that we’re going to face as a campaign is ‘no.’ Jack had never been outspokenly political before, but I reached out to his manager and told them what we were doing, and he was like, ‘I’ll call you back.’ Sure enough, Jack was like, you know what, the existential crisis at hand is totally worthy of me coming out and doing this. I’m sure there was some fear of how this might alienate his fan base. I don’t really have a way of proving this, but I think for that day, you know, the metrics of Jack White’s streaming actually went up.”

Musicians for Bernie, Bernie for Musicians

In the years since the 2016 election, music has embraced political activism more vigorously than any time since the 1960s. The popular confluence of arts and activism within the zeitgeist is something Wilson hears from musicians who are keenly aware of their place in the still-developing history of the moment. He cites the campaign’s work with singer-songwriter Mike Posner as one of the highlights of helping an artist make the successful transition to campaign surrogate.

“He has never been political before, and, in our initial conversations, he was really nervous about getting involved,” Wilson said. “He had just finished walking across the country, and he had this really profound experience where he met so many people from different walks of life (no pun intended). When we were doing a canvas launch where he made an appearance in Iowa, he said he had asked his family or family friends, when Martin Luther King gave his ‘I have a dream’ speech, where were you? A lot of people responded with, ‘Oh, I remember I was at home.’ And he was sort of like, man, like I don’t want to miss that. I don’t want to be the guy who looks back and says, ‘I should have done more’ or ‘I should have been there.’”

When asked about the ultimate relationship between Sanders and his musical surrogates, Wilson describes something akin to symbiosis. For the campaign, hosting rallies featuring big-name music acts helps them stand out within the crowded media landscape, and circumvent traditional political press that often seems less than eager to provide the campaign coverage

“We all know that traditionally Bernie has gotten the media blackout,” Wilson said. “One thing we can do to counter that is when we have these jaw-dropping moments that, you know, the press just really cannot ignore. If these music platforms like Rolling Stone and Consequence of Sound are going to actually come out and cover a Bernie Sanders rally, we’re able to expose the campaign platforms to a whole new group of audience because of it.”

The musicians, in turn, get the support of a candidate who Jane O’Meara Sanders described at an Austin rally last month as “the arts and culture president.” For Wilson, this means championing causes outside those of the traditional political powers.

“As cheesy as it might sound, it’s not me, it’s us,” Wilson said. “’Us’ is the most inclusive word that corresponds to all of the platforms that this campaign champions: universal healthcare, access to education, the environment, the Green New Deal. I can’t speak for the artists themselves, but I’m sure that they’re very conscious of, like, where is their healthcare coming from? How are their kids going to grow up in a society that favors the 1% and keeps the little guy suppressed? It’s not by chance that these artists are getting involved.”

Let Me Thank the Band: Bernie Sanders' Talent Booker on Turning a Campaign into a Music Fest