Artist of the Month is an accolade we award once per month to an up-and-coming artist who we believe is about to break out. In April, we watch as Rina Sawayama finds new ways to connect and create with fans.

The first I hear of alt-pop artist Rina Sawayama is that “Rina Sawayama is not the Asian Britney Spears” — yet, when I first listen to her music, that’s exactly what I think, and I’m not mad about it. Rina is a Japanese-born British singer, songwriter, and model who has recently garnered attention from fans all over the world.

Rina’s newest project, SAWAYAMA, is her first full-length album, set to be released on April 17th. Born in Niigata, Japan, she was raised from an early age in the UK, where she discovered her love of music and academics. Rina’s introspective and intelligent outlook on the world seems to come from her time at Cambridge University, where she first began to notice cultural differences and ostracization among different races. These experiences made her the artist she is today, encouraging her to find her own identity balancing Japanese culture with Western life and give us a glimpse of that through her unique style of music.

The album has been said to be an “intimate look” into Rina’s world, and sonically it explores everything from early 2000s Max Martin-like-pop, touting lyrics about a materialistic world facing the horrors of global warming, to heavy metal vibes that sound reminiscent of Red Hot Chili Peppers’ bass lines with poptimistic melodies.

Having recently partnered with Dirty Hits for this particular project, Rina has already released a few singles from the album, all of which quickly earned over one million streams. As for the rest of the album, Rina says, “I want fans to come with no expectation, really. I guess they’re allowed to expect it to be good.”

Although the sonic comparison to someone like Britney Spears — or really, any pop tune from the early 2000s — is obvious in Sawayama’s music, the lyrical content is much more worldly and relevant than anything of the period. But don’t get it twisted. That’s not all it is. Rina takes heavy metal sounds and even includes guitar solos on her new tracks, something that Britney wouldn’t be caught dead doing.

“Everything kind of picks up from different bits of the 2000s. I think music was so diverse then. You had nu metal, like Limp Bizkit’s ‘Rollin”; but you also had Justin Timberlake in R&B and pop. Then you had a whole huge wave of R&B like Ashanti and Ja Rule and Destiny’s Child, etc. Then you had Kylie [Minogue], and then you had the resurgence of girl bands, like Girls Aloud, Sugababes, Atomic Kitten. So yeah, the album kind of picks from all those places really.”

On Her New Album 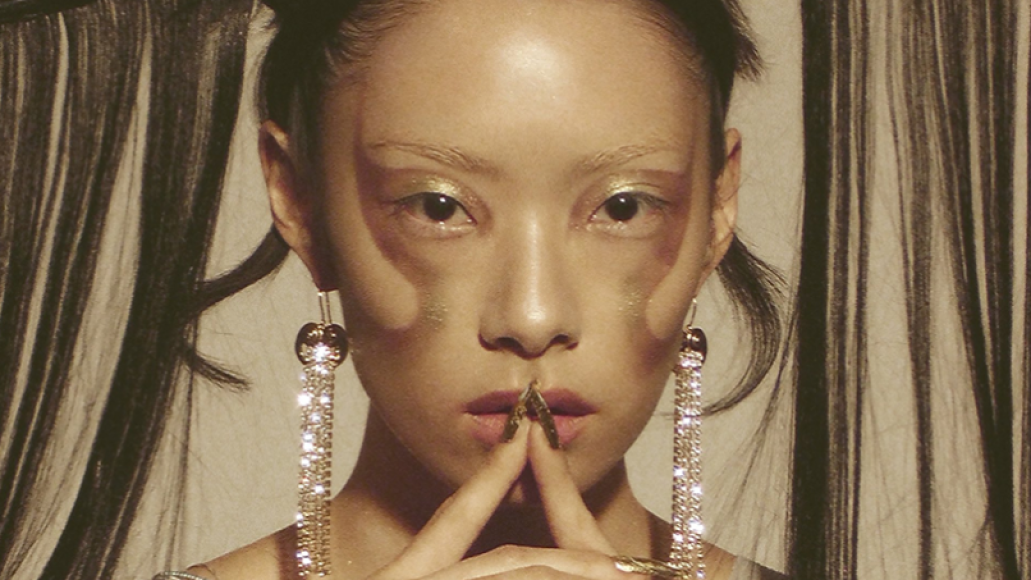 “The album on the whole is quite personal. It’s actually been interesting having had closure from writing the songs, to then kind of having to reopen those boxes in interviews. It’s been pretty taxing at times… The album ultimately is about family and identity. It’s about understanding yourself in the context of two opposing cultures (for me British and Japanese), what ‘belonging’ means when home is an evolving concept, figuring out where you sit comfortably within and awkwardly outside of stereotypes, and ultimately trying to be ok with just being you, warts and all.”

On Crowd-Sourcing from Fans

To accompany the release of the song “Chosen Family”, Rina crowdsourced fans’ interpretations of the track for a video project that premiered on her YouTube channel. She shared the chords and lyrics and asked that people submit a recording of themselves playing what they imagined the it might sound like a week before Sawayama released the official version.

“We received a lot of submissions for the ‘Chosen Family’ challenge, which was absolutely awesome. I knew that I kind of wanted to give something for people to do in this time and have an excuse to just pick up the guitar or an instrument and be able to just produce something. I think creativity really pushes us through some bleak times. I’m actually surprised that kind of no one got the melody at all; I think that says a lot about songwriting: that there’s an infinite number of melodies possible over a certain chords.

I just hope that ‘Chosen Family’ is one of those songs that make people feel seen and can provide some sort of healing. I kind of wrote it with my friends in mind, and I’ve already shown them and they love it. It was supposed to be quite an emotional song. I always want to want people to feel something.”

On Having the Hottest Record on BBC 1

The song “XS” premiered as the “Hottest Record in the World” on Annie Mac’s BBC 1 Radio show. “They’ve always supported me since the beginning — it’s mad. I’ve never really had my songs played on radio, and now it’s kind of a hot record and a track of the week. It’s been really surreal and amazing. Radio 1 is something I’ve grown up listening to; it’s incredible.”

When it comes to the song itself, which explores materialism and global warming, Rina says, “I think ‘XS’ is kind of just a mockery of everyone, including myself. I guess it does hold a more sinister meaning now because of the coronavirus — still seeing ads, when times are tough. We shouldn’t spend, but I think material things give us comfort and maybe normality; surrounding yourself with things can be quite therapeutic, which I totally understand. I don’t try and offer a sort of black-and-white answer about something. It’s just kind of, you know, it’s just the way it is.”

On How Fans Can Connect with Her During Quarantine

Like all other artists who had tours planned for this spring or summer, Rina had to unfortunately cancel dates, but she’s still searching for ways she can better connect with her fans. “I will be trying to do something. I’ve been really busy trying to make sure that I’m able to connect with my fans during this crisis in a way that is not IGTV performances,” she says. “I feel really comfortable with like YouTube and their platform. So, I just want to provide really high-quality videos for people, even if it’s not music videos. Production value is quite important to me. So, stay tuned!”

Artist of the Month Rina Sawayama on Aughts Pop, Fan Projects, and Having the Hottest Record on BBC 1