The Pitch: Tyler Rake (Chris Hemsworth) is no ordinary Special Forces bloke with a death wish and a hair trigger — he’s haunted by mistakes from his past and loves diving off 30-foot cliffs just to feel something, man. But when he’s pulled in for an extraction job in Bangladesh rescuing young Ovi (Rudhraksh Jaiswal), the teenage son of a big-time drug lord, things go FUBAR pretty fast. Before long, he winds up in a white-knuckle chase through the city of Dhaka to get Ovi out. Heads explode, cars crash, and Rake kills one guy with — you guessed it — a rake.

The Art of War: The John Wick school of action filmmaking is certainly an appealing one — give an accomplished stunt coordinator the director’s chair, and watch the sparks and bullets fly with bone-crunching precision and expert choreography. In this respect, a good portion of Extraction works, especially in the first half. Stuntman-turned-director Sam Hargrave gets his Chad Stahelski moment, producers Joe and Anthony Russo (the former co-writing the script with Hargrave) giving him a smoky, desolate playground on which to ply his craft.

There’s no small amount of Peter Berg DNA in Extraction, from the Call of Duty milporn (expect lots of shots of folks in tactical vests holding modified rifles weaving through hallways and firing around corners) to the vaguely colonialist vibe (watching a white dude just absolutely mow through dozens of brown-faced henchmen). The script establishes Dhaka as a hellish paradise lost, ruled by impetuous drug lords and amoral mercenaries who throw children off of rooftops when they’re not using them as child soldiers. To its credit, the film’s mere existence offers American audiences a rare chance to see talented Bollywood actors ply their craft, and if this kind of film is what it takes to get us to sit down and listen to extended Hindi and Bengali subtitles, so be it. 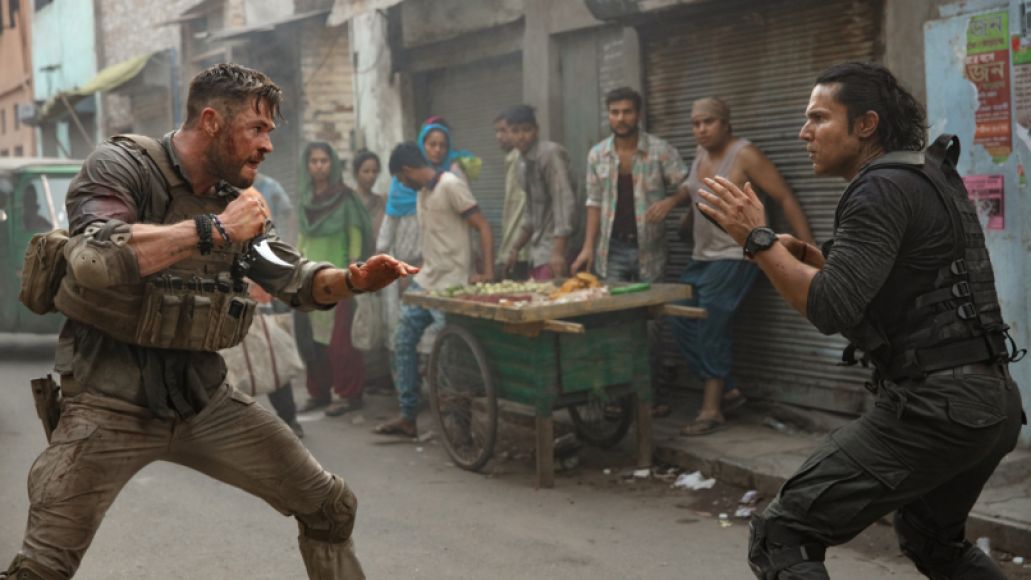 Extraction is underwritten by design: The film knows its briefing and wants to get down to bloody business as soon as possible. But while that kind of thing works in something more elegant, balletic and dryly funny as the John Wick films, Extraction is a brutal head-butt of a motion picture, and that kind of meathead appeal drains pretty quickly over the course of two long, foggy hours. Hargrave clearly has fun designing the intricate, intense setpieces therein, but often mistakes gore for intricacy. Fights are brutal but inelegant, and there’s only so far you can take that kind of brute-force approach before it starts to get tiresome.

Modern Thorfare: And at the center of it all is Hemsworth’s Rake, a role that offers Hemsworth all the action of his Thor roles and none of the fun. Sure, he gets to keep his Australian accent and a few glimmers of laconic humor, but he reminds one of the many kinds of wearied ex-commando roles we expected of our Stallones, Schwarzeneggers, and Seagals in the ’80s and ’90s. He’s downbeat, brooding, a sneering anti-hero with more than a few demons who sees a measure of salvation in the rescue of an innocent boy from the violent world he was born into.

We don’t learn much about him, save for glimmers of personal tragedy and the promise of redemption his current campaign offers. He’s mostly a blunt instrument, an avatar for the headshots and pistol-whips Hargrave quickly drops us into. One wishes he could have lightened up a bit, though: the aforementioned stunt with a literal rake feels like the kind of overt silliness these kinds of films call for, and Hargrave seems to back away from that kind of camp to take things Way Too Seriously. 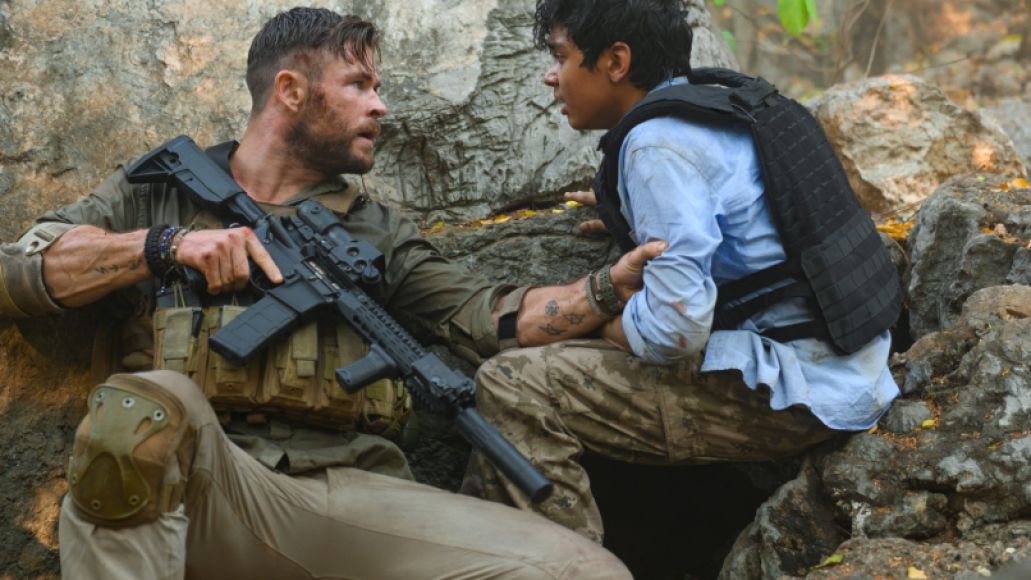 Harboured Resentments: Adding to the mountain of moody machismo is a bevy of character actors who do their best with intentionally underwritten material. Jaiswal does his best to inject Ovi with the kind of waifish naivete he needs to be an appropriate reflection of Rake’s lost innocence (“Why are you so brave?” he hokily asks Rake during a mid-film pause), but he’s mostly a walking, talking, panting MacGuffin.

Rake’s nemesis for most of the picture, an unstoppable machine of efficiency played by Randeep Hooda, offers a kind of efficient ruthlessness until the film needs him to have enough pathos to question his motivations. Paterson‘s Golshifteh Farahani peeks in from time to time as Rake’s ally, but is hardly given enough time to make an impression apart from a late-film stunt involving a rocket launcher. And poor David Harbour is plopped in for a mid-film cameo as an old friend of Rake’s who coincidentally happens to live in Dhaka, another potential life preserver with a few razor blades hidden inside.

The Verdict: If you’re looking for a lean-and-mean action picture where Chris Hemsworth absolutely bodies dozens of disposable henchmen, Extraction might fit the bill, at least for its first hour. The bloodletting is fast and furious, and if that’s your speed, it might just tide you over until we get another John Wick flick. But it’s impossible to escape its slow pace, virtual absence of humor, and the itchy feeling that we’re watching a Badass White Dude clean up the streets of an animalistic Third World. Cut it down to a slick 90 minutes and beef up the worldbuilding, and you might just have the kind of story that justifies all the sanguine mayhem.

Where’s It Playing? Extraction is currently busting heads and doing 360 no-scopes on Netflix.