Now that we’re all hunkered down in our homes, what better time to dust of that guitar lurking under your bed or in your closet… and finally graduate to “shredder” status! Need some inspiration? The 10 shred classics below are sure to challenge even the most talented guitar players.

In 2017, I assembled the book Shredders!: The Oral History of Speed Guitar (And More), which as its title suggests, tells the story of the style of guitar that stresses six-string technical proficiency. Beginning with the roots of shred and going through the genre’s ‘80s peak, its ‘90s downfall, and its triumphant revival in the early 21st century, countless big names were interviewed for the book.

Among those chiming in on the art of the shred in the book are Joe Satriani, Steve Vai, Billy Sheehan, Jason Becker, Marty Friedman, Kirk Hammett, Guthrie Govan, Alexi Laiho, and others, with a foreword and afterword provided by Alex Lifeson and Uli Jon Roth, respectively.

While the current pandemic has shut down the concert industry, it is giving guitarists and other musicians more time than ever to hone their skills. During this difficult time, guitar makers like Fender and Gibson are offering free online classes, while members of Megadeth, Anthrax, and more are participating in free one-one-one online mentoring sessions for music students.

If you’re already a pretty skilled guitarist, and want to get to that next level, below are 10 classic shred songs to aspire to while isolating at home.

All of the current and former members of Dream Theater are incredibly talented at their respective instruments. And on their debut album, guitarist John Petrucci wastes little time showing off his six-string skills, while bassist John Myung also navigates around his four strings with the greatest of ease – especially on the album’s lone instrumental, “Ytse Jam” (which is “Majesty” spelt backwards, as that was the band’s original name before switching over to one we all know now).

Mike Varney was one busy man throughout the ‘80s, launching Shrapnel Records and helping introduce the masses to the world’s top shredders – Tony MacAlpine, Greg Howe, Vinnie Moore, and especially, Racer X (featuring Paul Gilbert and Bruce Bouilett) and Cacophony (featuring Marty Friedman and Jason Becker). On “Scarified”, Gilbert and Bouillet show that besides speed soloing, the band could also come up with badass riffs, while on “Concerto”, Friedman and Becker push their instruments to the point of destruction.

Fans of shred guitar should be forever grateful to Dimebag Darrell – as he almost single-handedly kept skilled soloing alive in the 1990s (during an era when quite a few rock bands opted to bypass guitar solos altogether). And while all the selections on this little old list are full-on rockers, one of Dime’s top solos can be detected in a tune that alternates between being a power ballad and a headbanger – “Cemetery Gates”.

07. DragonForce, “Through the Fire and Flames” (Herman Li and Sam Totman)

Shred seemed to be all but dead in the mid-late ‘90s. But shortly after the dawn of the 21st century, a new wave of well-practiced guitarists were ready to show off their skills – especially DragonForce. On what is probably their best-known track, “Through the Fire and Flames”, guitarists Herman Li and Sam Totman wage war on the fretboard – especially during an extremely dangerous “guitar duel” that begins at the 3:22 mark.

If there was one guitarist that was to be awarded the most over-the-top shredder, Michael Angel Batio could very well be the head honcho. Everything about his band of the late ‘80s, Nitro, was about overkill – the band’s look, their vocals (courtesy of singer Jim Gillette), and of course, the guitar playing. It turns out that Batio is an ambidextrous fellow, who could play two guitar necks simultaneously, and took it even further by being able to navigate around a “quad guitar.” Just give a view/listen to Nitro’s video clip for “Freight Train” for the proof (and if you’re impatient, forward directly to 2:25 mark for Batio’s literarily explosive solo).

When Ozzy Osbourne left Black Sabbath in 1979, it was understandable if most metalheads didn’t get their hopes up concerning his post-Sab solo band. But then… he was lucky to cross paths with the legendary (but then-largely unknown) Randy Rhoads. With most new rock guitarists merely imitating Eddie Van Halen at the time, Rhoads was one of the few to introduce his own style – which merged classical elements into this playing (predating Yngwie by a few years). And one of his finest solos (and definitely his finest riff) resides in one of Ozzy’s best-known tunes, “Crazy Train.”

The neo-classical metal movement kicked off in the ‘80s (after guitarists such as Uli Jon Roth began paving the way in the ‘70s), and its undisputed leader was a chap by the name of Yngwie Johan Malmsteen. Mixing elements of Bach and Blackmore, Yngwie (who certainly had one of the most kickass first names in rock at the time) offered an alternative to all the two-handed taping EVH clones – and this tune and its over-the-top video certainly unleashes the fury.

How could David Lee Roth top the mighty Van Halen after exiting in 1985? By assembling one of the most awesome instrumentalists ever for his first solo band – including guitarist Steve Vai and bassist Billy Sheehan. The entire Eat ‘Em and Smile album remains a shred classic (and one of the most commercially successful of the entire genre) – and its zenith is certainly a remake of Talas’ “Shyboy”, which contains some of the most death-defying six-string and four-string work ever captured on tape.

With Steve Vai getting gobs of press circa ‘86/‘87 due to his work with David Lee Roth, in quite a few of his interviews for guitar magazines, he would mention the talents of his former teacher, Joe Satriani. And Satch quickly established himself as one of rock’s top guitarists – promptly issuing the shred classic, Surfing with the Alien, and its popular tune, “Satch Boogie” (which interestingly, he composed while wearing a neck brace after suffering whiplash from a car accident!).

Is there any surprise that this would be deemed the numero uno shred tune of all-time? Before Eddie Van Halen was introduced to the masses in 1978, if you wanted to hear fleet-fingered playing, you had to listen to primarily jazz guitarists (go ahead and give a listen to Al Di Meola’s “Race With the Devil on a Spanish Highway”). But EVH brought speed and precision to the equation of rock guitar – as well as his trademark taping technique. But unlike the majority of “Eddie imitators” that would follow in his path, EVH was not all about playing 100mph all the time, and also always valued the importance of songwriting and playing a solo that fit the tune. “Eruption” — his solo instrumental track off Van Halen’s classic self-titled debut — single-handedly changed the course of rock guitar.

To order a copy of Shredders!: The Oral History of Speed Guitar (And More), click here. 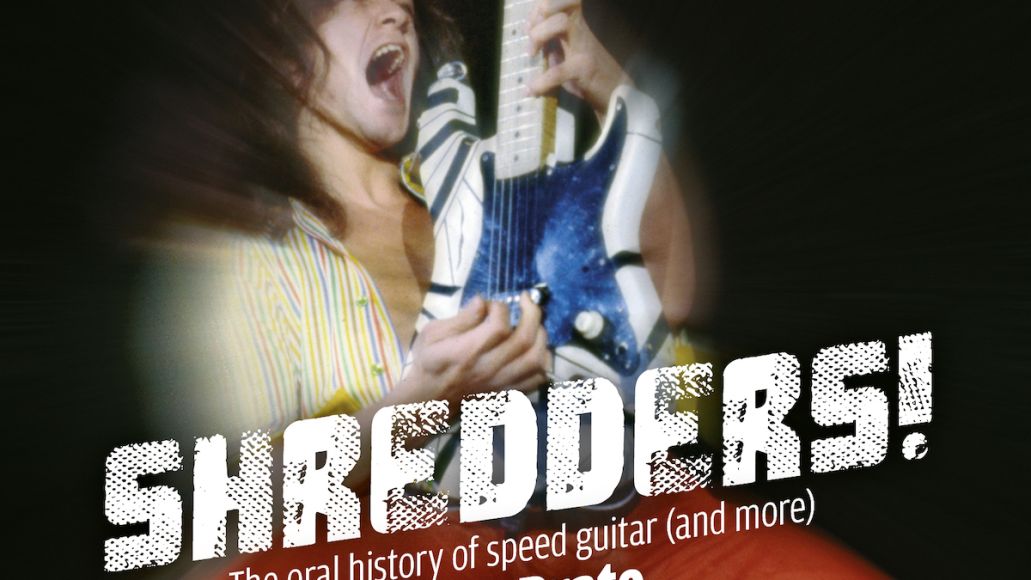