T-Swift has been publicly feuding with Braun since 2019, when his company Ithaca Holdings purchased Big Machine Label Group, including the master recordings of Swift’s first six albums. Those ill feelings flared up again today when Big Machine quietly rolled out a new Swift album, Live From Clear Channel Stripped 2008, available as of midnight Friday local time.

Swift found out through the Twitter sleuthing of her fans, and responded with a scathing statement over her Instagram stories. “I’m always honest with you guys about this stuff,” she wrote, “so I just wanted to tell you that this release is not approved by me.”

The pop star went on to confirm that Braun and his backers paid $330 million for her music, suggesting it wasn’t a “wise choice” that left them desperate for money. She ended the statement with a shot at the “tasteless” Braun.

“In my opinion… Just another case of shameless greed in the time of Coronavirus. So tasteless, but very transparent.”

In December, Swift excoriated Braun’s “toxic male privilege” during her Billboard Woman of the Decade speech. This upcoming November, Swift plans to re-record all of her old songs, creating new masters that she’ll own.

Earlier this month, Swift participated in Lady Gaga’s One World: Together At Home Concert. She’s also covering salary and healthcare for employees of the Nashville record store Grimey’s. 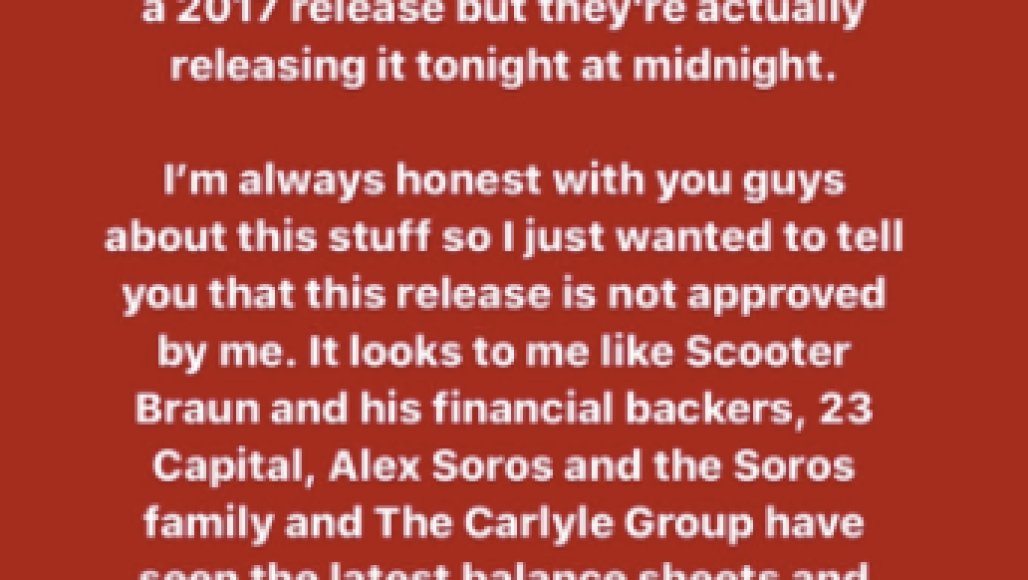