The Pitch: Super producer Ryan Murphy and frequent collaborator Ian Brennan shine their seven-episode limited series spotlight on a fictional version of Hollywood in the wake of WWII. A rag-tag collection of ostracized minorities, including a Black female star, a Black gay writer, a half Asian director, a female Jewish studio head, and one incredibly boring white actor, come together to work on a color-blind biography that could change Hollywood, and history, forever.

Failed Screen Test: The way that Hollywood is being marketed, you would think that it’s a 1940s Once Upon A Time…in Hollywood revisionist take on a classic story. Eventually the series moves in that direction (around episode four … of seven) when Peg, based on the real tragic death of Peg Entwistle, a struggling young starlet who died by throwing herself off the H in the Hollywood sign, finally begins production. However, in order to get there, audiences are forced to wade through hours of familiar, trope-filled storylines that have been done (and better) by other productions.

Take, for example, the first episode, which is almost exclusively dedicated to Jack Castello (David Corenswet), former veteran, now aspiring actor. Jack is the kind of bland milquetoast white leading man of both Hollywood and Ryan Murphy’s dreams: he’s a Ken doll come to life, with no discernible charisma, but plenty of expectations about his inevitable success as a star. Jack’s story dominates the first episode: his struggles to provide for his pregnant wife Henrietta (Maude Apatow), his attempts to find work as an extra, his recruitment by pimp Ernie (Dylan McDermott) to work as a gigolo, and, finally, how he leverages his sexy extracurriculars to land himself a screen test for Peg. 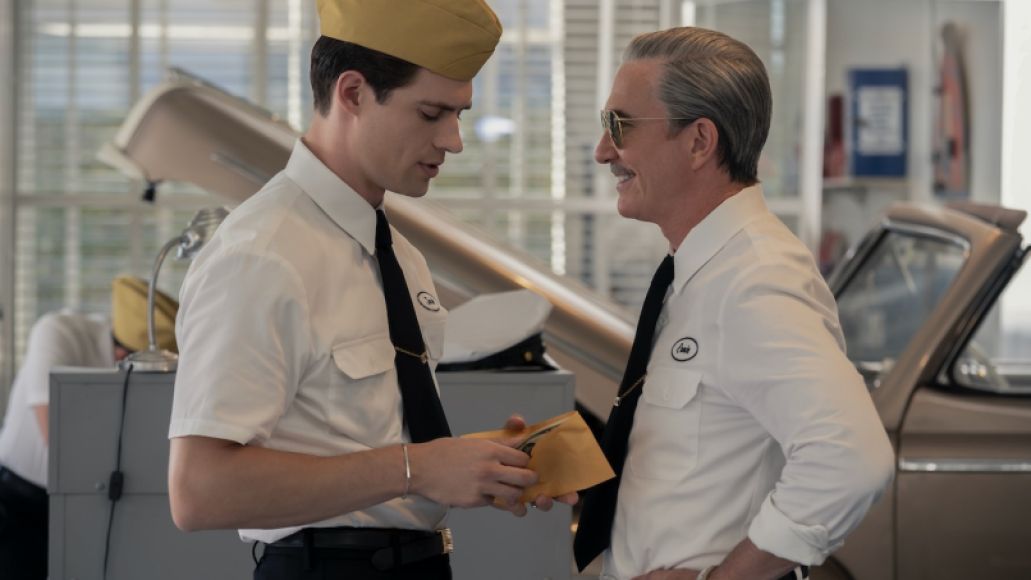 It’s not only a safe and underwhelming first hour, but one that relies almost exclusively on the series’ single least interesting character/actor, which says a lot about the creative decisions underpinning Hollywood.

Tired Tropes: There’s a strange irony watching a fictional band of outsiders agitating to change a monolithic system considering that the Netflix series itself is so formulaic and predictable. Possibly the biggest disappointment is Hollywood’s reliance on tired, outdated, and boring stereotypes and clichés to tell a very familiar story. This is a series filled with small town characters coming to the city with big dreams, jaded producers chomping on cigars, and stars who are “made” on the casting couches of agents, execs, and the rich elite.

This isn’t ground-breaking content by any stretch. The history of Hollywood’s sexism, as well as its racial and religious discrimination, queer invisibility and sex abuses are well documented (see also: Karina Longworth’s podcast You Must Remember This or her book, Seduction). Hollywood’s sole significant contribution of note to this dialogue is displacing the vast majority of predatory sexual activity onto (queer) men as both aggressors and victims. 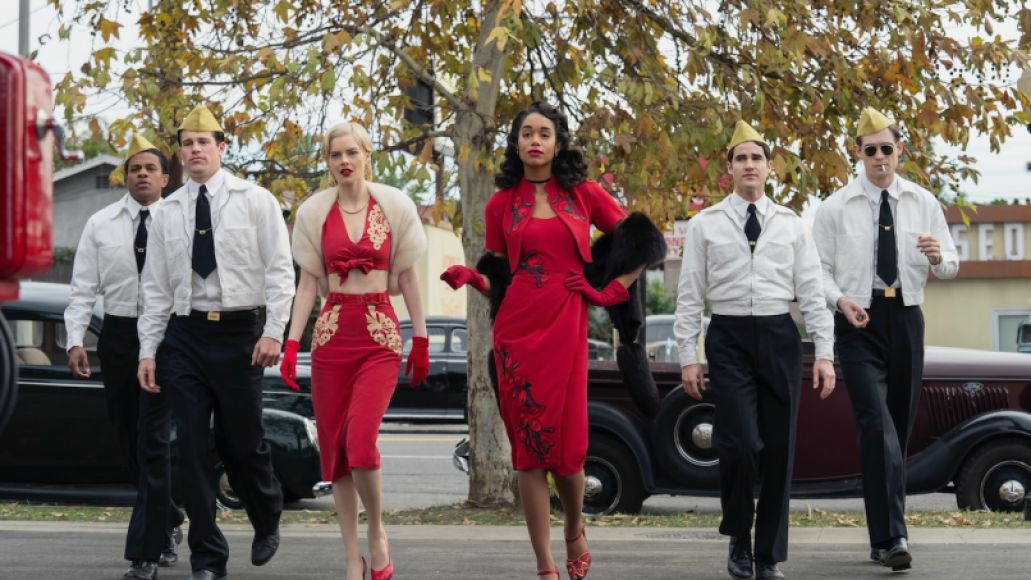 This is especially prevalent in Henry Wilson (Jim Parsons, hitting the same one note over and over), a gay agent who forces his clients, including a naïve Rock Hudson (Jake Picking), to <gasp> sleep with him. There are also storylines about police raids on queer cruising theatres, and a sex party at famed queer director George Cukor’s mansion that takes up nearly an entire episode.

The decision to displace sexual assault onto queer narratives is a curious critique from arguably the most powerful gay man in the biz, especially considering the men Murphy cast in the series and how the series visually frames them.

Bland Men: Hollywood is filled with sexualized male bodies. There are multiple instances of full-frontal male nudity at the aforementioned Cukor party; Jake poses nude for a celebrity photographer; and he and Rock, as well as a bevy of similarly cookie-cutter musclely white men, are regularly seen in white briefs. This could almost be seen as a ground-breaking reversal of Hollywood’s tendency to exploit female bodies … except that all of these men are cut from the same Ryan Murphy catalogue of interchangeable, hot generic white dudes as all of his other series. After so many instances, it’s less of a critique and more of a preference at this point. 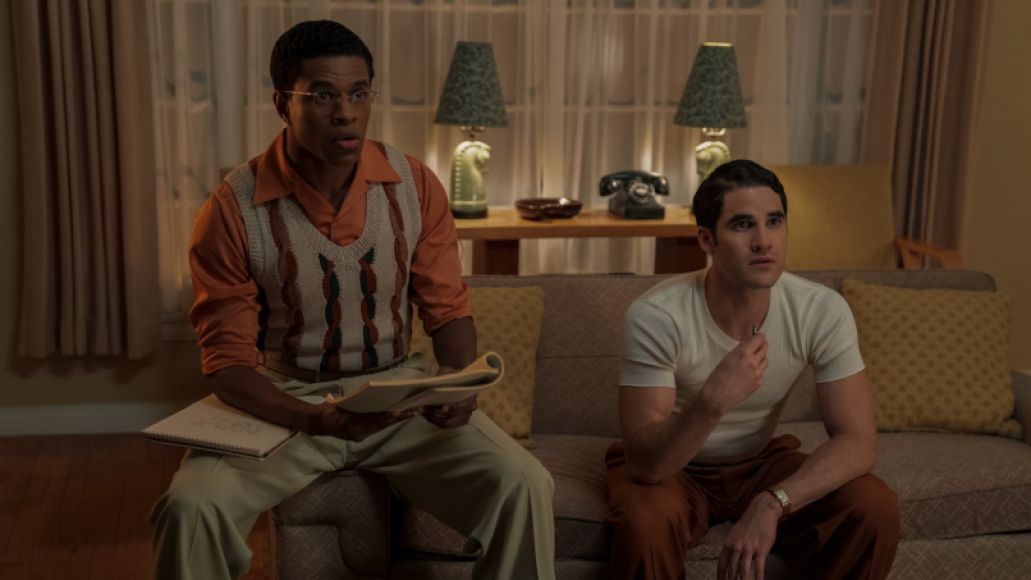 Female Star Power: With roughly half of the main cast beset by a severe case of the Blands, bless the comforting presence of female performers like Holland Taylor, playing producer Ellen Kincaid, and the legendary Patti LuPone, as Avis, the newly installed Ace studio mogul. The latter, in particular, is great: LuPone brings an energy and vitality that is almost entirely absent elsewhere. 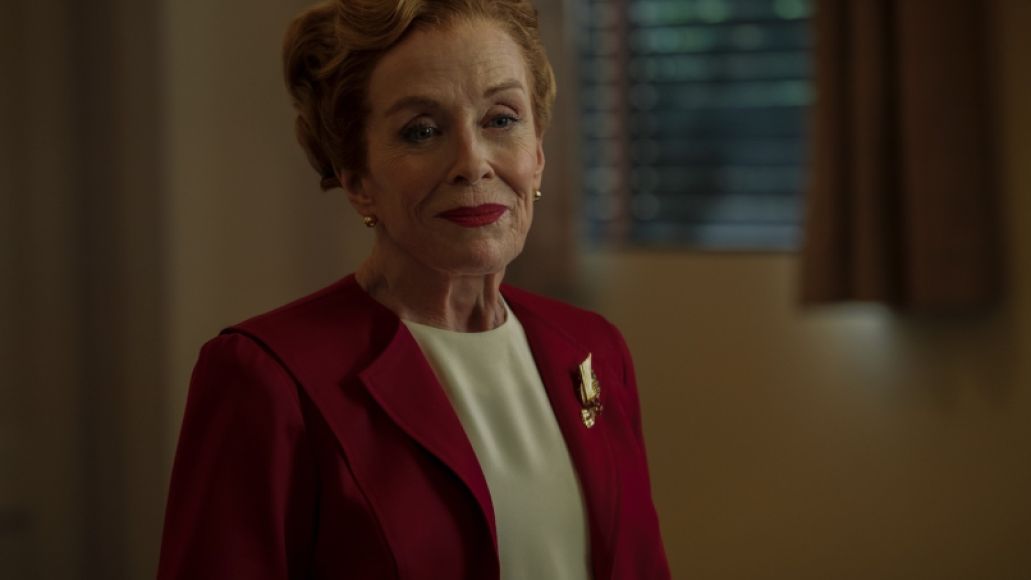 As aspiring lead actress Camille, Laura Harrier is more subdued, though her early scenes — acting as a stereotypical black servant (complete with exaggerated inflection) for a belligerent white director 0- are suitably uncomfortable. Alas the series frequently forgets both her and her white competitor Claire (Samara Weaving), often in favor of more male-centric storylines.

Finally, credit should also be paid to Mira Sorvino and Queen Latifah, both of whom appear in a few episodes in small roles, but do well with what little material they have.

Action! As a limited series of only seven episodes and a reasonably large cast of characters and narratives, Hollywood plays out in surprisingly relaxed fashion. Considering how frequently magic, stars, destiny and other catchphrases are tossed around, there’s surprisingly little to be found in how the story plays out. 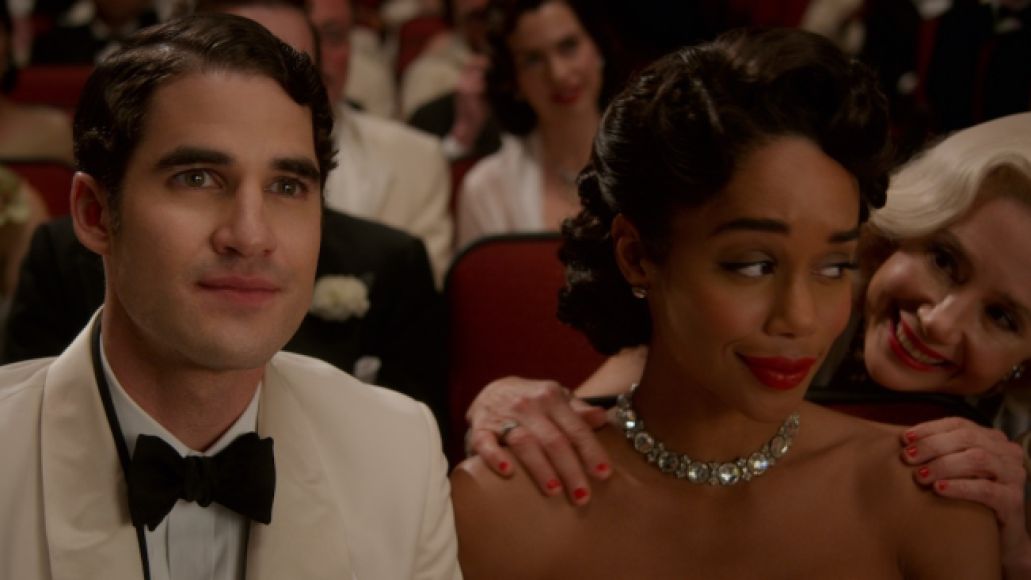 Not only is the series surprisingly bereft of rousing speeches or impactful sequences, there is very little to help to distinguish individual episodes from one another. When the less-than-subtle, thematically on-point opening credits – featuring the cast helping each other climb to the top of the Hollywood sign – is the most memorable aspect of the series, that’s a pretty major problem.

The Verdict: Hollywood is a curiously inert, borderline dull, limited series that displays a startling lack of awareness about its formulaic narrative and boring (male) characters. Despite its pedigree, the latest Ryan Murphy/Netflix collaboration simply isn’t worth the leap.

Where’s it Playing: All seven episodes of Hollywood open for business on Netflix as of May 1.