Editor’s Note: The Who’s Live at Leeds was recorded on February 14th, 1970. It’s the only official live album that features the band’s classic lineup. Brian Coney’s excellent editorial, which ran in May 2020 for the 50th anniversary of the record’s release, will explain why Live at Leeds remains arguably the greatest live rock and roll recording of all time.

June 1969. Back from the brink, The Who are bigger than they ever imagined possible. With Tommy selling 200,000 copies in the first two weeks in the US alone, it was a remarkable turnaround for a band who, only a few months earlier, neared bankruptcy and calling it a day. In what must have seemed like the blink of an eye, the rock opera was born, and, with it, Pete Townshend ascended to his throne, the last high king of 1960s counterculture.

With FM-friendly Tommy A-sides “Pinball Wizard” and “I’m Free” refining their “maximum R&B” down to proto prog-inflected rock, The Who found themselves zig-zagging across the world, topping major festival bills and — full testament to their expanding appeal at the time — packing sold-out opera houses. As the ’60s ground to a halt, and with a seminal 5 a.m. slot at Woodstock immortalising the spectacle of their peak-era live show, it seemed like high time to begin taping concerts for a possible live album. Impulsive and perfectionist in equal measure, Townshend was never satisfied with the results and ordered the band’s sound man, Bob Pridden, to burn the tapes.

“We thought that we would get the best material,” Townshend told Rolling Stone at the time. “When we got back, we had 80 hours of tape. I said, ‘Fuck that, I’m not going to sit though 80 hours of live stuff.’ Let’s face it, you’d get brainwashed. So, we just scrapped the lot.”

Informed by an increased desire to beat the bootleggers pocketing from their art, Pridden was directed to roll the tapes once more when The Who stopped off at the 2,000-capacity University of Leeds, England, on Valentine’s Day 1970. Initially mixed down as a six-track release and let loose unto the world three months later, largely as a stop-gap until Townshend could pen a worthy successor to Tommy (blessedly, that would be 1971’s Who’s Next), Live at Leeds didn’t capture the freak wave of a band unexpectedly hitting their stride: it revealed four musicians riding an alchemical, generation-spanning high of their very own design. Though they may not have known it at the time, The Who were making music history.

While the likes of Led Zeppelin and Deep Purple continued to assert their own clout at the heavier side of the spectrum, in its molten weight and sheer roaring din, Live at Leeds was much less a statement of intent and more a declaration of preeminence from The Who. Leaping into a decade that would, for better and worse, irrevocably alter their course for good, Roger Daltrey, John Entwistle, Keith Moon ,and Townshend — flanked by 4 x 12 cabinets running through two 100 watt amplifiers — were no longer interested in showing up simply to compete.

Presented in nothing more than a stark, yellow sleeve bearing the band’s name (a direct nod to the look of late-1960s LP bootlegs and a send-up of The Rolling Stones’ Live’r Than You’ll Ever Be), Live at Leeds is seismic from the second “Heaven and Hell” erupts. A John Entwistle-penned overture to everlasting life and refrains like “Why can’t we have eternal life/ And never die?” double as war whoops to immortal youth. Setting the pace for the heady ebb and flow of hits, standards, and camaraderie that defined the set’s full 33-song trajectory, few openers have felt quite as emphatic since.

To its enduring benefit, there’s no great mystery to unravel on Live at Leeds. With mod-pop classics “Substitute” and “I Can’t Explain” bleeding into a slew of well-traveled covers including Mose Allison’s “Young Man Blues”, it set a standard, first and foremost, as a dazzling display of collective power and skill. At its best, it feels borderline combustible, an ear-bursting show of force from a band that was — and this is categorical — watertight beyond comparison. The way their face-searing cover of “Summertime Blues” yields to their take on Johnny Kidd’s “Shakin’ All Over”. How “A Quick One, While He’s Away” effortlessly unfurls across nine minutes. That kind of finesse doesn’t magically appear overnight. It can’t ever be summoned via practice alone. Look closer and it’s the synthesis of pure conviction with a one-in-a-million union that will always outrun imitation and fabrication.

Creating something of an uncanny valley sonically, the absence of crowd noise mid-song serves to emphasize the blitzing panorama that is Daltrey and co. in full swing. Besides, many moments of levity take center stage in their own right. Take the deafening cheer that goes up when Townshend says, “We’d like to play three selected hit singles. Well, the three easiest” before “Substitute”, “Happy Jack”, and “I’m a Boy”. Or the giddy feat that is “Magic Bus”. Once a three-minute blues shuffle, the song takes form as a wonderfully wayward eight-minute theatrical piece. Histrionic, quick-witted, and brimming with rapturous applause, Live at Leeds does not lack warmth.

While singling out one member might seem like a foolish endeavour, the fact remains: Keith Moon circa 1970 was a game-changing, nigh on reality-defying proposition on drums. While attempting to specify where he peaks here feels like the real folly; during the medley section of “My Generation” things — the kinesis, exhibitionism, and ferocity of it all — just seem to level up a few notches. Like artillery fire from a one-man cavalcade, perfectly aligned with Entwistle’s rumbling forays, Moon spearheaded all that was uniquely hard, heavy, and proto about The Who. Though his genius endures on many studio recordings, nowhere does it roam so freely than on Live at Leeds. “One of our troubles is Keith Moon,” Townshend said around the time. “He’s just so deafening. If we do a two and a half hour show, he just starts playing like a machine.”

By their very nature, live albums aim to translate a quintessence that can never really be put down in the studio. By 1970, the likes of Frank Sinatra and Miles Davis had mastered it. Insofar as rock was concerned, the results were invariably primitive, marred by overdubs or both. Unveiled six months ahead of The Rolling Stones’ stellar Get Yer Ya-Ya’s Out, Live at Leeds was a bona fide blueprint for the loud and incendiary live album. Though reissued and expanded upon several times over the last 50 years, its essence holds up as one of the closest things to rock and roll scripture. Without it — without The Who’s combined vision to go so far beyond — a world with the likes of Thin Lizzy’s Live and Dangerous, Motörhead’s No Sleep ’til Hammersmith, and AC/DC’s If You Want Blood You’ve Got It is, at best, unthinkable.

Pick up a copy of Live at Leeds here… 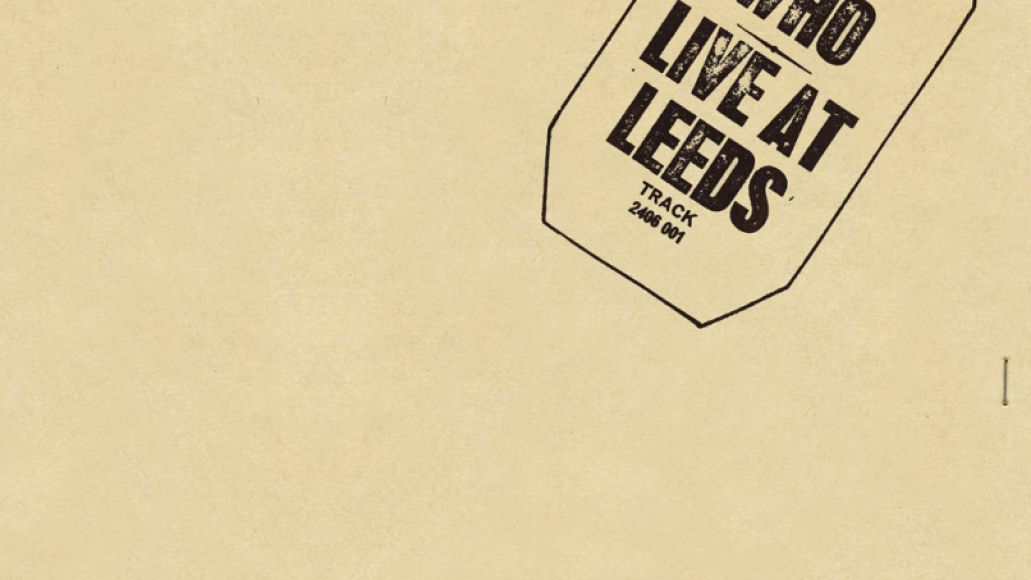