Icon of surreal cinema Alejandro Jodorowsky will premiere his new film Psychomagic, a Healing Art exclusively through Alamo on Demand. The new documentary, out August 7th, will be preceded by a five-film retrospective, which will stream beginning on August 1st. As if that weren’t enough, a deluxe box set called The Alejandro Jodorowsky: 4K Restoration Collection will be available for purchase on August 21st.

The Chilean director rose to fame in the 1970s with a pair of cult classics, El Topo and The Holy Mountain. Jodorowsky mixed Catholic imagery, mysticism, and surreal violence in a way that incensed religious leaders in Mexico and South America while gaining the admiration of John Lennon. Later in life, he became obsessed with tarot cards, as well as alternative healing ceremonies that he refers to as psychomagic. The documentary Psychomagic, a Healing Art is an exploration of his work in this field.

In an interview with Euronews, Jodorowsky explained his unusual healing method.

“First of all, I create a family tree. I look at the family, the brothers and sisters, going back as far as great-grandparents. Then I draw conclusions about the nature of the problem. Sometimes it takes an hour for me to come up with a psychomagical task that the individual themselves must carry out. They become their own healer.”

Ahead of the premiere of Psychomagic, a Healing Art, Alamo on Demand has partnered with ABKCO for a five-film retrospective. Starting on August 1st, viewers will be able to watch Jodorowsky’s first feature film Fando y Lis, as well as the classics El Topo  and The Holy Mountain, and two recent  autobiographical fantasies, The Dance Of Reality and Endless Poetry.

Is Kanye West’s Yeezus an ode to Alejandro Jodorowsky’s film The Holy Mountain?

Additionally, ABKCO and Arrow Films have announced The  Alejandro Jodorowsky: 4K Restoration Collection. This deluxe box set features Jodorowsky films digitally mastered for Blue-Ray, including Fando Y Lis, El Topo, The Holy Mountain, Psychomagic, A Healing Art, and the 1957 short film Le Cravate. The set also includes the original soundtracks to El Topo and The Holy Mountain, and a host of interviews, behind-the-scenes documentaries, and other extras. The box set is available for purchase beginning on August 21st, and pre-orders have begun. Check out the full contents below. 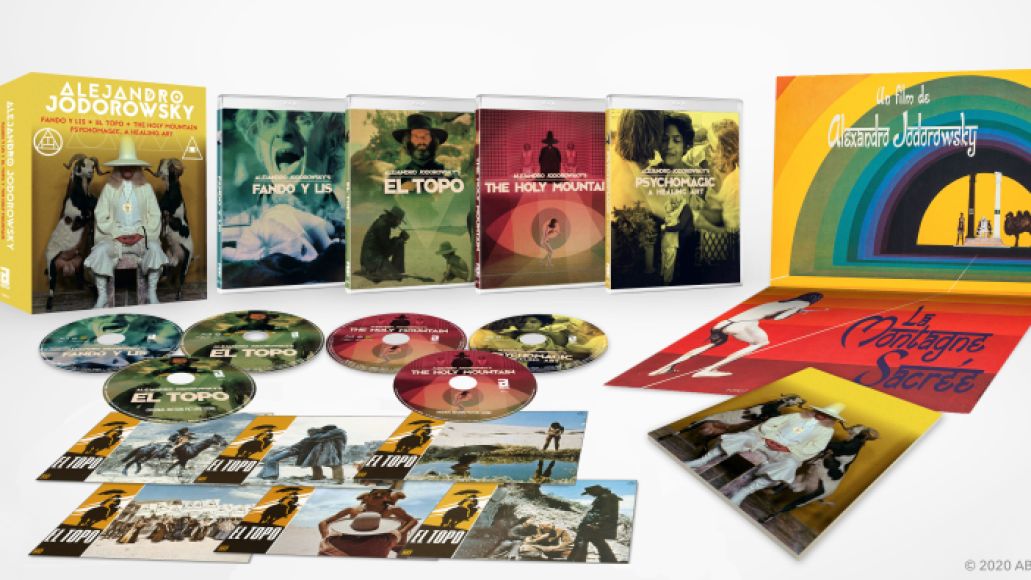