Beyoncé Knowles-Carter has joined a growing chorus of outraged citizens calling for justice for Breonna Taylor. In an open letter to Kentucky’s Attorney General, the pop icon demanded that the police officers responsible “be held accountable for their actions.”

In the early hours of March 13th, sergeant Jonathan Mattingly and officers Myles Cosgrove and Brett Hankison used a battering ram to force their way into Breonna Taylor’s Louisville home. Taylor, a 26-year-old emergency room technician, was asleep with her boyfriend Kenneth Walker. After the police broke down the door, Walker grabbed his gun and attempted to defend himself from the intruders. In the ensuing gunfire, the trio of Mattingly, Cosgrove, and Hankison shot Taylor at least eight times, killing her.

The Louisville Metro Police Department had obtained a no-knock warrant, authorizing the officers to enter without identifying themselves as law enforcement. Police were investigating a drug-dealing operation located nearly 10 miles away. According to The Louisville Courier-Journal, the LMPD knew that neither of their primary suspects were at Taylor’s home, and instead suspected one of the two men — Jamarcus Glover — used her apartment to receive packages. No public evidence supports that assertion. At the time of Taylor’s death, Glover was already in police custody.

As was the case with the strangulation of George Floyd, Breonna Taylor’s murder came to symbolize how aggressive police tactics endanger black lives. “Breonna’s Law” passed in Louisiville, banning no-knock warrants, and federal lawmakers are considering similar legislation. But the police officers who actually killed her remain employed by the LMPD, and while they’ve been placed on administrative leave, they are still drawing pay.

In her open letter, Beyoncé acknowledges these “small steps in the right direction,” but calls them “painful reminders that there has still been no justice for Breonna Taylor or her family.”

Bey points out that the police seemed to have tried to cover up the killing. The official “incident report states that Ms. Taylor suffered no injuries — yet we know she was shot at least eight times.” Knowles-Carter ties this into her broader concerns about systemic racism. “With every death of a Black person at the hands of the police,” she writes, “there are two real tragedies: the death itself, and the inaction and the delays that follow it.”

Beyoncé has three demands: That criminal charges be brought against the three officers; that Kentucky AG Daniel Cameron will “Commit to transparency in the investigation;” and that Cameron will furthermore “investigate the LMPD’s response to Breonna Taylor’s death, as well as the pervasive practices that result in the repeated deaths of unarmed Black citizens.”

When Ahmaud Arbery’s Lawyers Couldn’t Get to Court, JAY-Z Sent a Private Jet

Throughout, she reminds AG Cameron of how much time has gone by, and how much work remains to be done. She writes,

Check out the full letter below. Last month, Beyoncé responsed to the murder of a George Floyd with a heartfelt video message, saying, “We cannot normalize this pain.” In addition to her activism, Queen Bey has been heavily involved in the coronavirus crisis response, launching a COVID-19 testing campaign in Houston and donated $6 million to coronavirus relief. She recently gave a commencement speech for the Obama’s “Dear Class of 2020” virtual graduation ceremony. 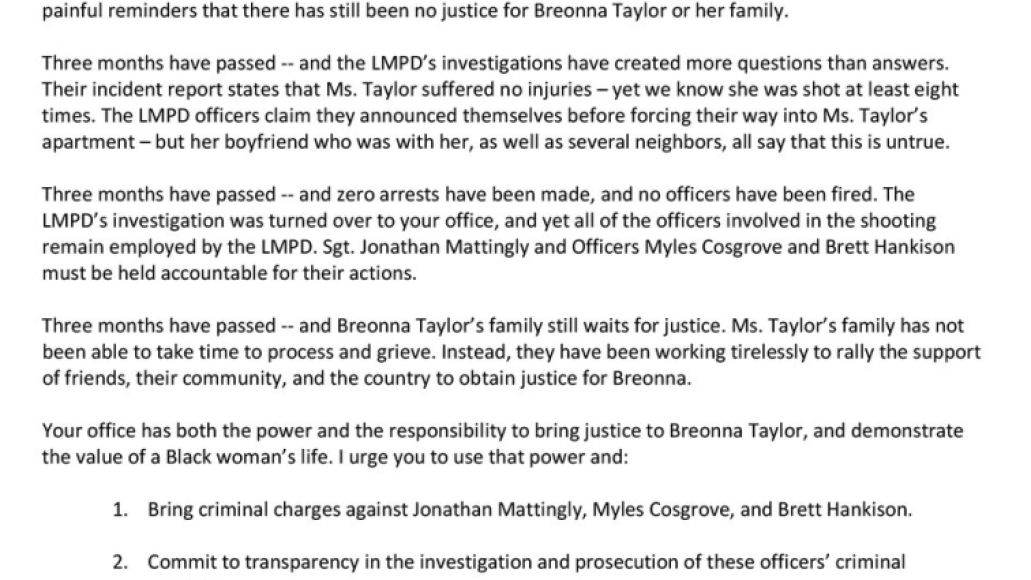