The Pitch: In Jon Stewart’s Irresistible, the year 2016 and the U.S. presidential election very much happened.

The Democratic National Committee is left licking its wounds in the wake of what was to be a slam-dunk win for Hillary Clinton. All the strategy, all the super PAC money, all the campaigning, photo ops, polls, and beyond still couldn’t put a seasoned veteran in the White House. Gary Zimmer (Steve Carrell), a leading DNC strategist, is burrowed under his bedsheets, dodging calls from MSNBC, CNN, national networks, and the rest of the circus. He was too smart, too punchy, too confident, too well-funded, and too connected for this to happen.

Fast forward to the present. Zimmer discovers a viral video of a town meeting interrupted by a Marine colonel, Jack Hastings (Chris Cooper), protesting voter ID laws. Zimmer instantly sees a potential spike in votes. Here’s a gruff, conservative-seeming serviceman and farmer from Wisconsin speaking on behalf of left-leaning ideology with an easy-to-understand moralism. Call Hawkins what you will: homespun, plainspoken, a marketing team’s fantasy when trying to appeal to Middle American voters. Now, Gary has to have what could be a symbol for the Democratic Party’s attempts to apologize to Wisconsin and regain voter trust.

Irresistible is the story of Zimmer’s often crass and comical attempts at a comeback, as he insinuates himself into a small-town mayoral election that attracts national press and the ire of the RNC. 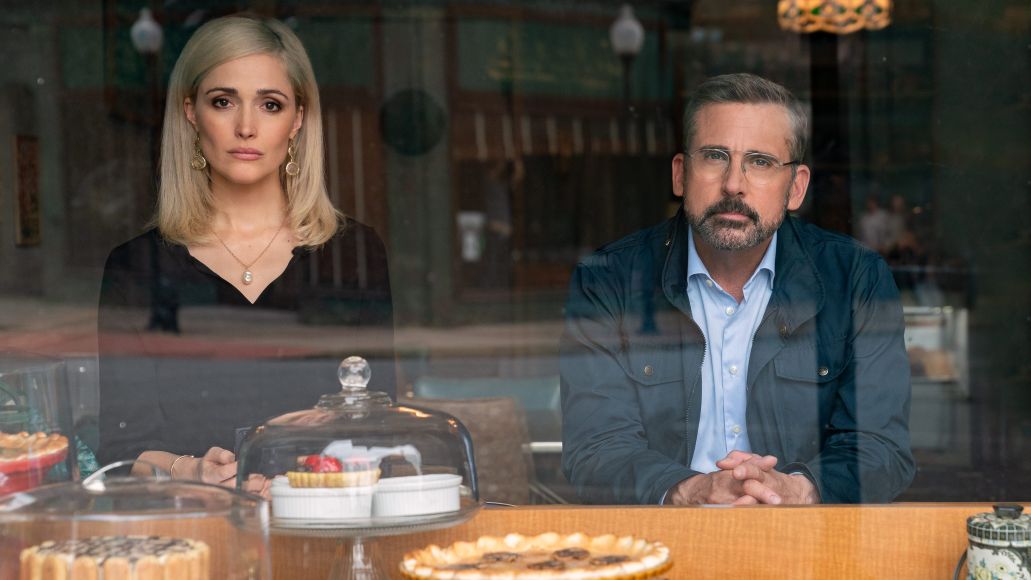 A Shot to the Heartland: You know that public domain footage of the guy getting slugged in the gut with a cannonball?

That’s what the results of the 2016 election felt like for more than half of us. Stewart reminds of us this ulcerative result, using that footage while diving right into the hell the American public has wrought in a too-fast, too-slim politisphere. We got hit, we got hurt, and we (hopefully) realized we still had a lot to learn. And even when Stewart’s approach veers into the obvious, the talking points stick.

Zimmer is emblematic of establishment politics: well-coiffed, aging into his LL Bean and New Balances, and totally oblivious to the access he enjoys on a whim. He has a private jet on call and enjoys burgers in Wisconsin bars that sell no food, as Carrell rides the line playing both a temperamental yuppie and a man who genuinely believes in helping people. To the actor’s credit, he sells the premise’s rubberneck tone for its absurdism (watching Carrell break decorum and walk into opposing cable news interviews is grade-A silliness) and well-meaning sentiment (begging Hawkins to run in a way that’s so naïve it’s almost endearing).

Zimmer’s good intentions turns into the comedy of escalation. As public interest intensifies, so does the money. What Wisconsin mayoral election needs tens (if not hundreds) of millions of dollars fueling it? An election that becomes a battleground for national politics in 2020, one less about issues and more about the Democratic and Republican parties staging a debate club pissing contest on the national stage. 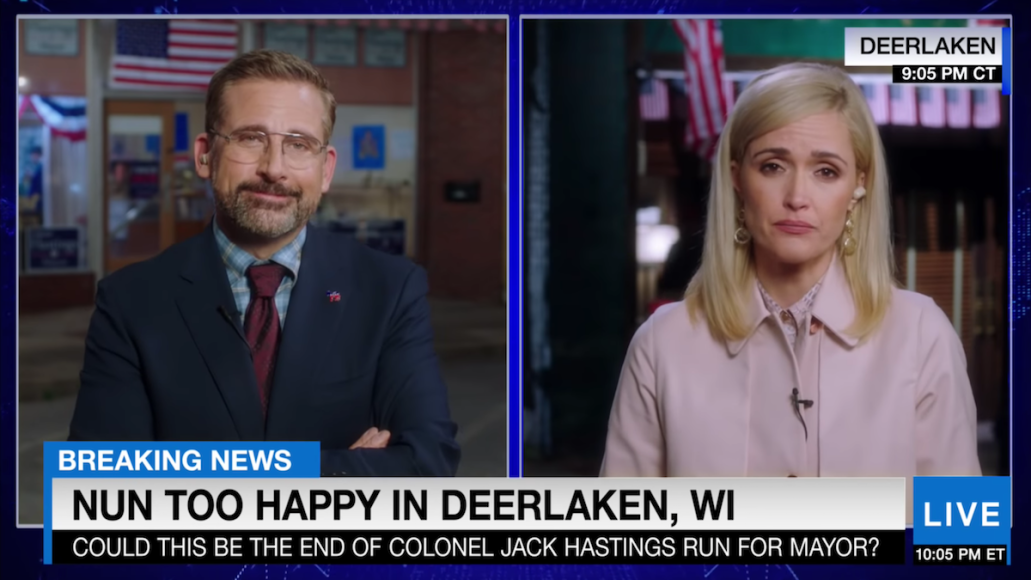 Zimmer magnetizes Faith Brewster (Rose Byrne, savoring a vampiric Kellyanne Conway riff) and the money of the RNC. She’s interested in supporting the incumbent Mayor Braun (Brent Sexton), if not for any ideological reasons. Main Street gets bought up and blown out into a turf war of campaign centers, as Zimmer educates the sleepy burb on PAC laws and shadow money while Faith introduces her team to Koch-style endorsements and other high-cost vanities. It’s often very silly, running the gamut from droll to McKay-lite fourth-wall breaks.

Stewart’s style of comedy has always been exasperation offset by exhaustion. Irresistible is very much a comedy of the now, and how the veneer components of politicking can blind the public from actual issues, and so Stewart’s devotees and core fanbase might feel a little “well, duh” about what he’s saying. Perhaps more hopefully, Stewart pitches the humor as so broad and rational that Irresistible could be seen as apolitical, if not downright humanistic. It’s a risk, a potentially both sides one, but the money, the battle cries and war drums? Surely most American audiences can agree that the machine is ridiculous, right? Maybe?

Regardless, CNN and Fox News pump trillions into non-stop publicity with nominal research out of the fear of losing the audience. The race itself is treated like a reality show, with endless speculation about the brackets. (It’s hardly shocking that years of priming Americans into seeing candidates as contestants fostered a TV president, but I digress, or rather, agree with Irresistible’s surlier points.) Stewart’s had enough skin in the game to see these things, and he’s internalized years of watching networks and platforms behave badly in a way that he externalizes in a sneaky polemic.

Still the Same: Notice how this review has barely touched on Hawkins, his daughter Diana (Mackenzie Davis), or the film’s Midwestern town at large? There’s a reason for that. Stewart spins a yarn about what happens when yarns are over-spun and dipped in bronze. Brewster and Zimmer are so vain, you probably think this movie’s about them and them only, don’t you? But without handing off the political football, know that sneakier commentary is at play as well. Stewar, unafraid to dive into the harder math and humanistic element, knows very well that a town, filled with struggling people, is the underlying narrative, and Zimmer thinking he’s a king or a dignitary when standing next to locals, plays into the joke of self-importance. Stewart uses Carrell and Byrne as bait in order to inevitably fry bigger fish.

Moments of Zen: Stewart is still a proficient harangue artist. His secret? His writing and style of delivery doesn’t quite feel like a rant. Years of Daily Show writing has helped Stewart find a style that works here: Start ridiculously, then sneak attack with the education points.

In an opening recreation of the famed “spin alley,” a phrase that Stewart coined (while calling Tucker Carlson a “dick”), Zimmer and Brewster openly mock the press with overconfident platitudes on why their candidates are the best and only options. Stewart has been hitting this for years, and yet people still fall for celebrity-style anchors delivering repetitive, puddle-deep reporting.

When Stewart turns cable newscast scenes into verbal roustabouts, or even lets his national reporters comment on the excessive suckerdom we’re up against while trying to drum up clicks and eyeballs, obvious doesn’t even begin to characterize it. But he’s not wrong. Irresistible is funny with a side of sincerity in its pleas. The balance will no doubt irk some, but the hope is it could educate others.

Verdict: Irresistible plays like a well-placed warning, getting its chance to be seen by an election-addled public just months before the 2020 cycle. And at the risk of playing into hyperbole — especially given this film’s reasonable distaste for such oversimplification — this is practically required reading. Yes, Irresistible is a farce about political theater, and an often painfully funny one, but it’s also a deeply unnerving manifesto on the pundit economy, campaign financing, and the narcissism, ego, and collective amnesia it all fosters.

Where’s It Playing? Streaming and (apparently) in theaters this Friday, June 26th.

Jon Stewart’s Irresistible Is A Snarky, Silly Plea for Less of the Same: Review