The Pitch: There’s not much distance between The King of Staten Island, the sixth feature film from comedy legend and super-producer Judd Apatow, and Pete Davidson’s much-publicized real-life. The circumstances are different — Davidson’s character in the film isn’t a comedy star on the most-watched sketch comedy show in the world, nor has he ever dated the world’s most famous pop star — but the background details are largely the same. Essentially, the movie is a fictional dramedy based on the real-life of 26-year-old Pete Davidson, comedian and the youngest cast member currently on Saturday Night Live.

Art Imitating Life: On Saturday Night Live, Davidson traditionally opts to appear as himself, often riffing about his actual mental health issues and sobriety. When he became tabloid fodder after briefly dating pop star Ariana Grande, he even joked about that on-air after their very-public split. Shortly after that, he posted “I really don’t want to be on this Earth anymore” on Instagram, pushing his mental health troubles even further in the public consciousness and prompting a check-in from police.

Enter The King of Staten Island, an Apatowian comedy-drama that finds Davidson playing Scott, a 24-year-old Staten Island resident who’s still living in the basement of his widowed mother (played by Marisa Tomei). Scott spends most of his time getting high with his friends, tattooing strange children in the woods, and watching Staten Island-centric Universal horror films like The First Purge. 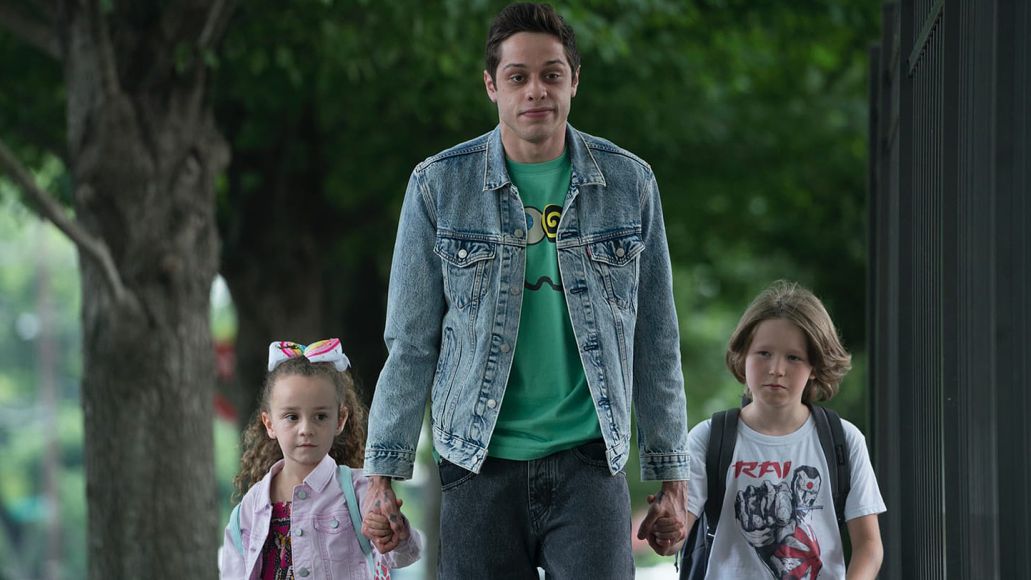 Similar to Davidson, Scott deals with mental health issues and it’s clear he’s still having trouble mourning the death of his father, a firefighter who died while on duty. His friends crack jokes about his deceased father, and Scott insists he’s over it and it’s no big deal to him, but it’s clear that he’s just posturing. The film opening with his own suicide attempt helps drive this point home.

(It should be noted that Davidson’s real-life firefighter father died in the September 11th attacks, and despite his celebrity status, Davidson still lives at home, in his mom’s basement, on Staten Island.)

The movie largely deals with Scott seeking a purpose and finally moving out of his comfort zone (aka his mom’s basement), an issue forced upon him after getting into a fight with his mom’s new firefighter boyfriend Ray, played by stand-up comic Bill Burr, in his best performance to date. The second half finds Scott maturing, taking on a myriad of new responsibilities, and finally starting to get his shit together. 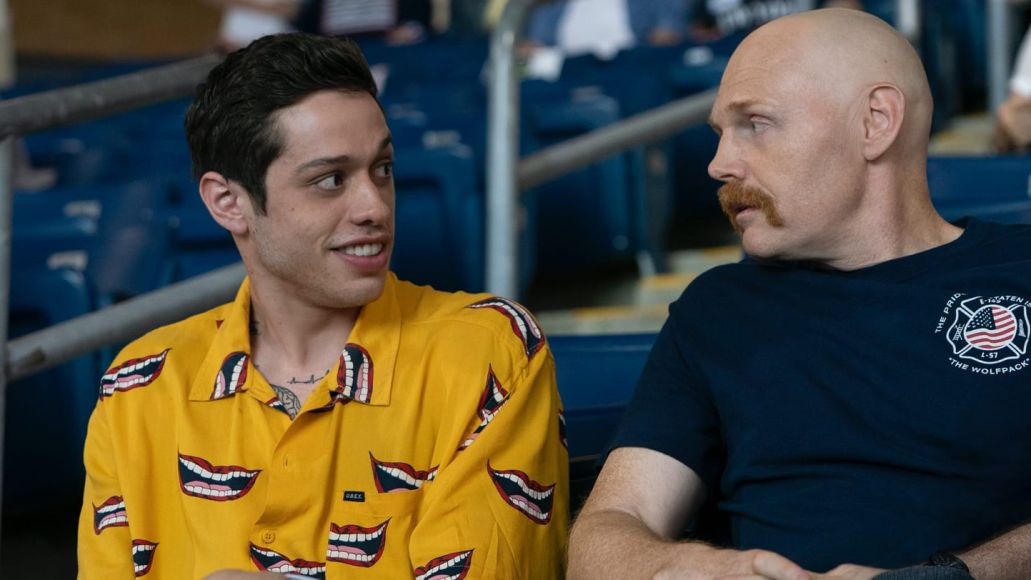 The Apatow Touch: For better and for worse, The King of Staten Island grafts Pete Davidson’s real-life traumas into the Apatow formula. All too often, his male leads are a variation of what literary critic Leslie A. Fiedler has called a “Good Bad Boy,” or imps who eventually shed their mischievousness for domesticated normalcy.

Scott ticks every box as an Apatow archetype. Scott smokes a ton of weed, refuses to commit to the girl he’s sleeping with, and doesn’t seem interested in getting a job or bettering himself in any way. The movie seems to posit that his arrested development is caused by his inability to get over the death of his father.

To be fair, while Scott does fit the archetype, the movie deserves credit for skewing a little darker than the usual Apatow conclusion. Things are left mostly unresolved and open-ended; we don’t see Pete completely transform into the better version of himself, because he’s not there yet. But it’s a start! It’s a hopeful ending that’s still a little bleak and realistic about the situation. 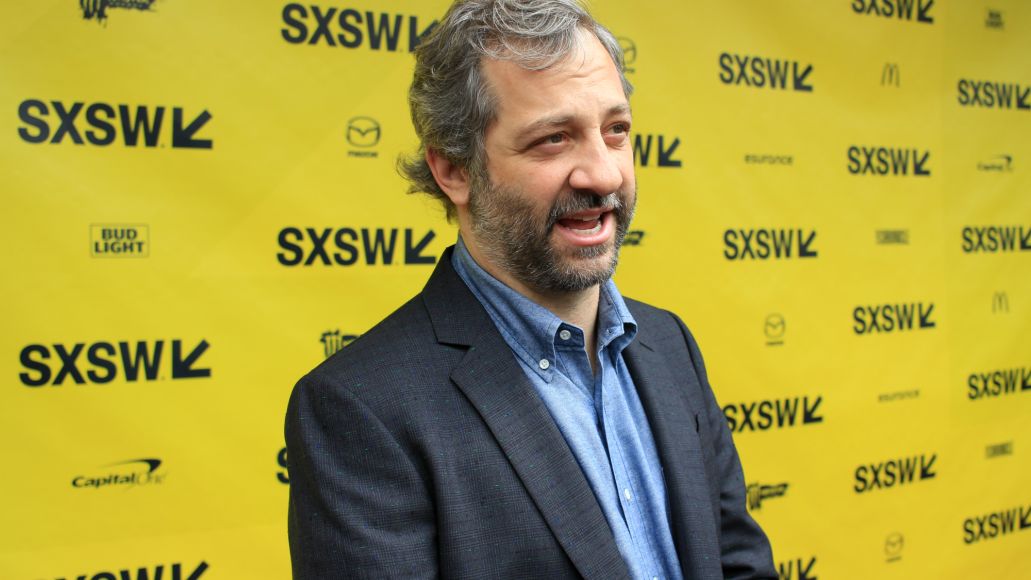 Even so, the movie has all the problems that people consider Judd Apatow benchmarks. At two hours and 17 minutes, The King of Staten Island is inexcusably overlong. It seems like it’s wrapping up, and then there’s another 40 minutes left, giving credence to the running joke that every Apatow movie is either 15 or 50 minutes too long. This movie skews towards the latter.

Instead of honing in on any one relationship, Apatow gives Scott a plethora of positive influences, including an entire firehouse full of firefighters, Ray’s two children, and Ray’s ex-wife. The second half feels overstuffed, and some threads get left behind entirely, like the idea that Ray is a bad guy who doesn’t want custody of his kids. Some of that gets addressed with a convenient line of dialogue, but it’s largely ignored in favor of moving on to greener pastures.

What’s most interesting about The King of Staten Island is the drama, and it’s a shame that it happens to fizzles out in the midst of the more gripping material. The problem is that the movie only flirts with Scott’s mental health problems when it’s convenient, scraping the surface when you want the film to dig deeper.

But perhaps that was Apatow’s intent? Looking back, it’s hard not to feel like Universal and Apatow spent millions of dollars bringing a Pete Davidson therapy session to life, and it must have been incredibly cathartic and therapeutic for the comic. If anything, it’s impressive that they’ve turned something so personal into a satisfying feature.

Is It Funny? The King of Staten Island is probably Apatow’s most serious feature to date. In fact, the film’s spiritual cousin, 2009’s Funny People, has far more laughs than Staten Island, which seems more content spending time with the characters being themselves and not necessarily throwing out a million jokes a minute.

That being said, there are a handful of laugh-out-loud moments throughout Staten Island, and one screamingly-funny extended sequence that winds up influencing a great deal of the plot, without spoiling too much. Having said that, your enjoyment will depend on whether or not you find Davidson charming and/or funny.

The Performances: Davidson is impressive in the lead role, but he’s outshined by a supporting cast that includes Oscar-winner Tomei, an incredible turn by Burr, and, in classic Apatowian fashion, a still-mostly-unknown cadre of comedians. If anything, New York comedy fans will enjoy cameos from the likes of Jessica Kirson, Liza Treyger, Rich Vos, and Bonnie Macfarlane.

But, back to Davidson: It’s been said the SNL star would make a terrific voice actor, and that sentiment is clear all throughout Staten Island. He’s still very much himself as Scott — and he’s certainly better at being funny than being serious — but his voice carries much of his performance with the king of animated gusto that may have Pixar calling in the near future. 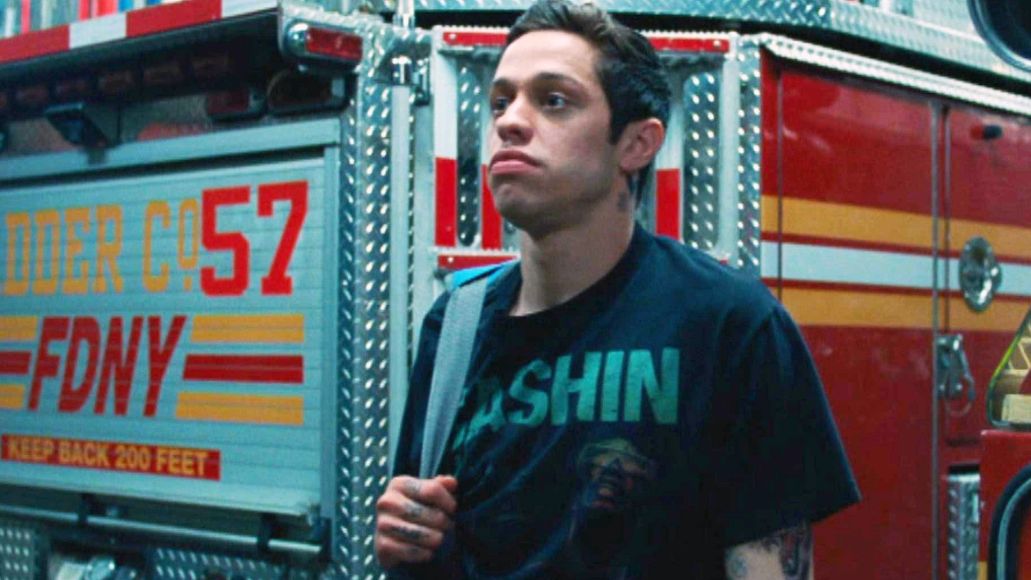 The Verdict: The King of Staten Island is more or less the first big summer movie originally slated for theaters that will debut at home, and it’s absolutely worth the cost of admission considering that notion. People have rightfully been starved for new entertainment, and Apatow’s sixth-feature will satisfy fans of his and Davidson alike. But again, if you’re not already on the bandwagon, there’s not much new here to convince you to jump on it.

Where’s It Playing? The King of Staten Island begins its reign on VOD this Friday, June 12th.