With Track by Track, we give artists the chance to take their fans through their latest album one song at a time. Today, Hinds reveal how they cast The Prettiest Curse.

After a delay precipitated by the ongoing pandemic, Hinds have today released their new album, The Prettiest Curse. Stream it below via Apple Music and Spotify.

While the band’s sophomore album, I Don’t Run, and its predecessor, 2016’s Leave Me Alone, were steeped in lo-fi indie, the Madrid quartet take a turn towards a cleaner garage pop sound with their third full-length. Producer Jennifer Decilveo (The Wombats, Bat for Lashes, Joseph) helped Hinds find balance between their raw live energy and crisp melodies for the tightest LP from the band yet.

In a note posted to Twitter on Thursday (June 4th), Hinds acknowledged that “it feels completely wrong to be releasing an album and promoting it during a time where the world seems to finally be listening to the major problem of racism.” They’ve called off all promotion for the record, stating that anything coming out now “we did weeks and months ago.” (That’s indeed true for the Track by Track interview below.)

Stream The Prettiest Curse and read a full Track by Track breakdown of the album from Hinds’ Ana García Perrote below.

“Good Bad Times”:
You know that part in the movies when two people in a relationship are living complete opposite realities? When one thinks everything is great and the other one is about to drown? “Good Bad Times” is the struggle of communication, time difference of relationships that don’t have the comfort of a routine. About the two sides of the coin, the two sides close together and can’t be separated, even though they seem to be completely different.

“Just Like Kids (MIAU)”:
This song is the ultimate response to the question, “What does it feel to be a girl in a band?” It’s a mix of conversations we’ve had repeatedly with strangers, “friends,” industry people etc. Being judged and insulted to your face doesn’t stop hurting when you join a band.

I’m very happy with the sound of this song. When we wrote it, it sounded innocent but CC had this idea of adding MOLOTOV’s style on the backing vocals, and we completely lost it haha we started yelling.

“Riding Solo”:
one day i was listening to a random playlist and i heard the lyrics of an old country song saying “mamas don’t let your babies grow up to be cowboys. cause they’re never stay home and they are always alone. even when with someone they love”. i felt like they were singing about me, us, people in bands. always alone, living upside down, running agains the speed of the world.

“Boy”:
Oh dang, a lot of songs in this album talk about missing someone or something haha… I guess that’s the price we have to pay, I guess it’s The Prettiest Curse 😉 For the first time in 5 years, we have had a real break from touring. We have all fallen in love. And now we all fear things are gonna change once we go back on the road. It’s like that thing they say about only appreciating what you have until you don’t have it anymore. Except we know exactly the day and month when we could start loose it.

“Come Back and <3 Me”:
We wrote this song in Carlotta’s old living room. Just with 2 acoustic guitars. It makes me so happy to hear it. We used to censure ourselves more when it came to writing lyrics. We were scared of sounding too cheesy… Not anymore… Is that cheesy? lol

“Burn”:
Wouldn’t life be easier if we didn’t care so much? Wouldn’t we be happier if we didn’t have a soul? As artists we work with our feelings… that’s why it’s not easy to learn how to feel without a heart.

“Take Me Back”:
It’s funny how sometimes we get stuck trying to find the perfect chorus when the only thing we really need is a guitar solo. No mistakes, no accents or mispellings, it’s just the best language.

“The Play”:
It’s about having an identity crisis. Looking at yourself in the mirror can be very scary, specially when the reflection is blurry.

“Waiting for You”:
This is a first too. First time we put ourselves in someone else’s shoes. Someone we hurt. Someone we loved. It was a tough song to write. 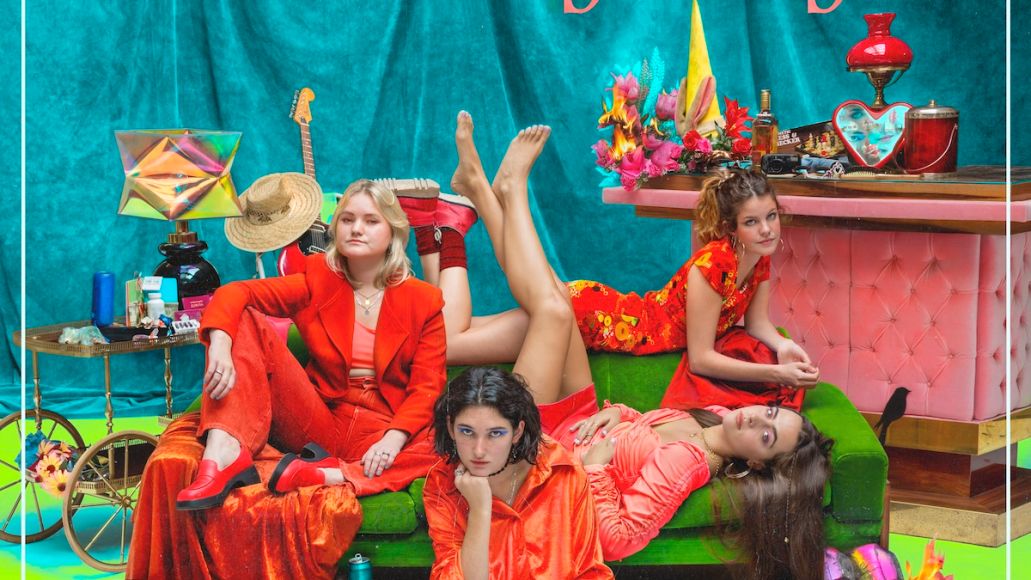 “This Moment Forever”:
A lot of the times we get separated from what we like, and who we love. But sometimes we have it all. Our life is full of extremes. So when we find what makes us happy, we are extremely happy.

Hinds Give a Track by Track Breakdown of New Album The Prettiest Curse: Stream