The Democratic Party of Orange County has passed a resolution calling for the John Wayne Airport in Santa Ana, California to be renamed.

The resolution cites Wayne’s history of “white supremacist, anti-LGBT, and anti-indigenous views,” and specifically quotes the actor’s comments in a 1971 interview with Playboy.

“With a lot of Blacks, there’s quite a bit of resentment, along with their dissent, and possibly rightfully so,” Wayne said in the interview. “But we can’t all of a sudden get down on our knees and turn everything over to the leadership of the Blacks. I believe in white supremacy until the Blacks are educated to a point of responsibility.”

“I don’t believe in giving authority and positions of leadership and judgment to irresponsible people,” Wayne went on to say. “I don’t feel we did wrong in taking this great country away from the Indians. Our so-called stealing of this country from them was just a matter of survival. There were great numbers of people who needed new land, and the Indians were selfishly trying to keep it for themselves.”

As “Orange County is now a diverse region far different from the time when John Wayne was chosen as namesake,” the resolution asks the Orange County Board of Supervisors to restore the airport’s original name: “Orange County Airport.”

The deaths of George Floyd, Breonna Taylor, Ahmaud Arbery, and other Black Americans have spurred a nationwide conversation on race and a recognition of symbols and names with racist connotations. There have been calls to rename Confederate-era statues after Dolly Parton and Prince, while artists including Dixie Chicks and Lady Antebellum have changed their names. 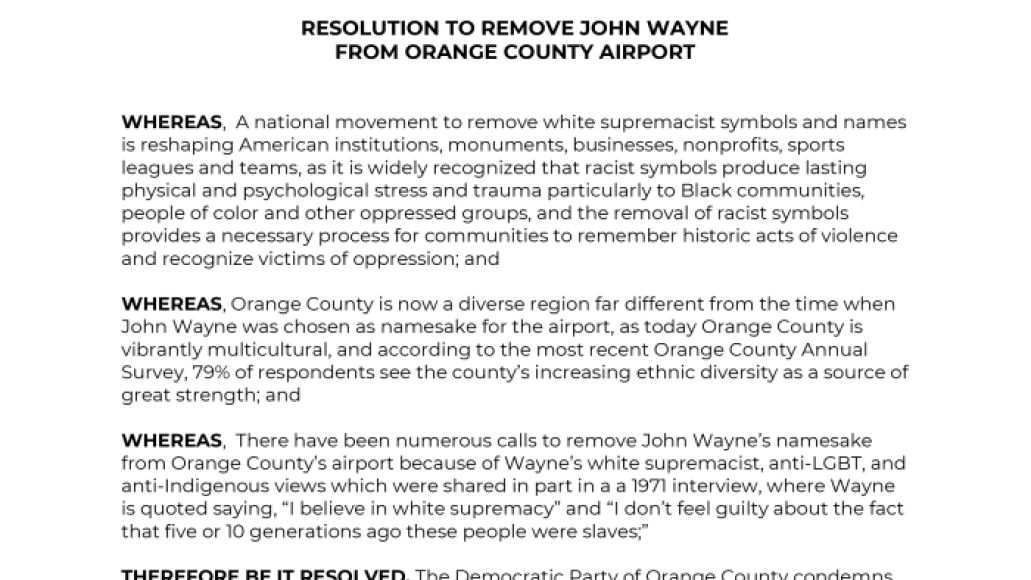 Resolution Calls for John Wayne Airport to Be Renamed