On Monday afternoon, Donald Trump emerged from his underground bunker and made his first public comments on the death of George Floyd and the subsequent protests filling city streets. Well, sort of. Trump only made a passing reference to Floyd’s death, and he failed to mention police brutality, institutional racism, and other societal issues that have allowed such tragedies to become commonplace in America. Instead, Trump threatened to illegally unleash the United States Military on American citizens. Then, after police gassed peaceful protestors, Trump walked to a nearby church for a bizarre photo shoot.

The whole thing was one of the more disturbing moments in the three-and-a-half year history of Trump’s presidency, which is really saying something. But there’s at least one person who found comfort in Trump’s remarks: former Nirvana bassist Krist Novoselic.

“Wow!!! I know many of you can’t stand him, however, Trump knocked it out of the park with this speech,” Novoselic wrote in a message posted to his personal Facebook page.

Novoselic recounted how he “drove from Wahkiakum to Seattle and back today and have seen [sic] countless fellow Washingtonians on the road. I did not see any violence—but a Tesla supercharging station at an Auburn mall was closed off by police. Driving, I passed by regular folks who are already stressed by the Covid. Now, social media and television are looping images of societal breakdown.”

While Novoselic acknowledged that Trump “should not be sending troops into states—and he legally might not be able to anyway,” the Nirvana bassist lauded Trump’s tone as “strong and direct.”

The Nirvana bassist then pointed to “leftist insurrection” as further evidence of how polarized the country has become. (Editor’s note: There’s contradictory evidence over Antifa’s involvement in organized rioting.) “Imagine if so-called ‘patriot militias’ were raising this kind of hell? If this were the case, left wing people would welcome federal intervention,” Novoselic remarked. “Most Americans want peace in their communities and President Trump spoke to this desire. Never mind the legal details that few understand—Trump said he would stop the violence and this speaks to many.”

In response to comments to his initial post, Novoselic reiterated that his Facebook page is “not a parody account — and certainly not a partisan echo chamber. I prefer to think for myself thank you.” He also said he voted for Gary Johnson in the 2016 presidential election.

Read Novoselic’s full remarks below. Update: Novoselic appears to have made his Facebook page private, as it is no longer accessible to the general public. He also deleted his Twitter account. 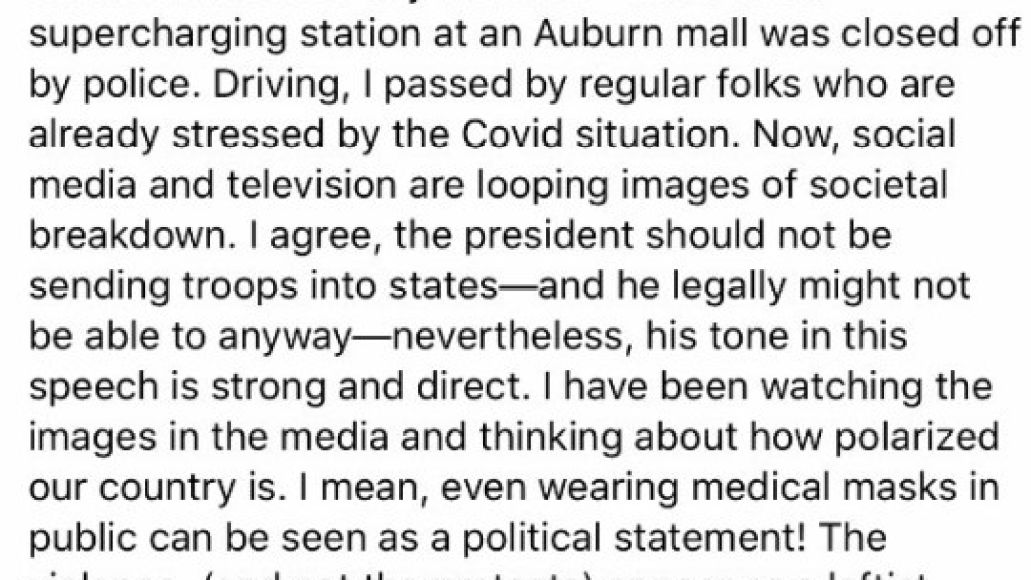 2022 Grammy Awards to Be Held April 3rd in Las Vegas