The Pitch: Eric Andre never stops performing. On his cult hit The Eric Andre Show, he’s not just interviewing guests and using himself as a canvas on which to paint Jackass-style feats of physical cruelty. No, he’s doing an impression of a talk show host. When he begrudgingly runs to the microphone at the top of each show to do Leno-style monologues, they seem to all but destroy him mentally. He does Man on the Street bits that are thinly veiled perverse pranks. He promises guests like Arnold Schwarzenegger, only to bring out comedy writer Bruce Vilanch on a rebel scooter. He runs into the audience as often as he allows the audience to run on stage. Because of this, his live shows are closer in spirit to the running of the bulls than any kind of comedy showcase. But chaos has always been his business, and business is good for Andre right now. Not only does he have one of the funniest comedies of the 21st century coming down the pipeline (see: Bad Trip), but he’s now on Netflix with his first special: Legalize Everything. Not surprisingly, Andre’s found another impression to flex: stand-up comedian. 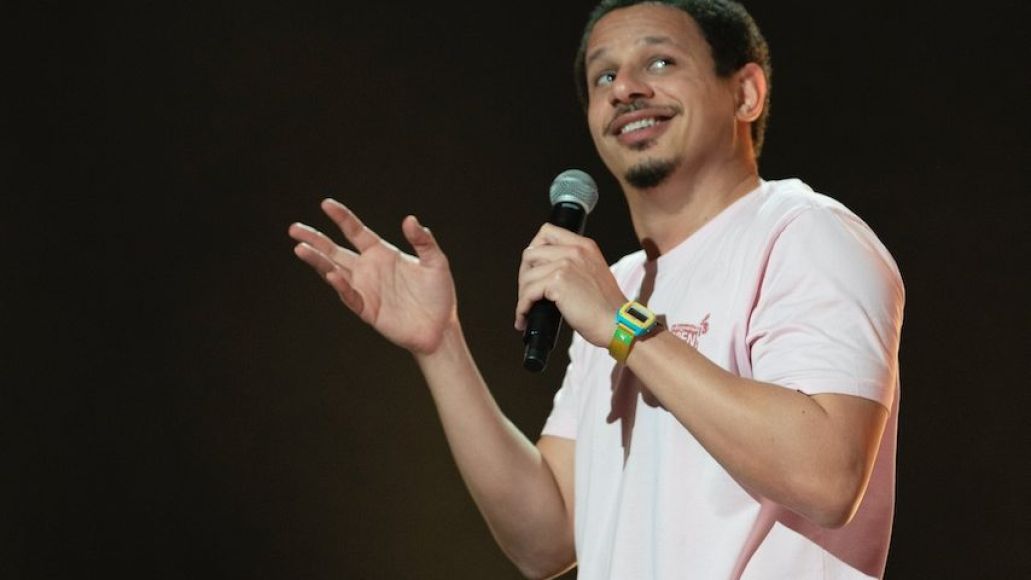 An Innocent Bystander: Legalize Everything starts with a classic Andre bit as he pulls himself from a police cruiser filled with empty beer bottles in a cloud of weed smoke and beckons random people to get high with him while dressed as a cop. This will be a familiar bit for everyone who knows Andre’s usual stock in trade, and his version of stand-up comedy is no less confrontationally strange and audience-oriented as his turn as late-night host on The Eric Andre Show. He threatens to give the microphone to an audience member, so he can share an anecdote before he simply climbs in the man’s lap and starts writhing and jittering. He closes his show by calling another audience member’s mother on FaceTime and getting her to show him her credit card. No matter the medium, Andre feeds on an audience’s energy and presence; his comedy is almost unthinkable without a horrified witness. 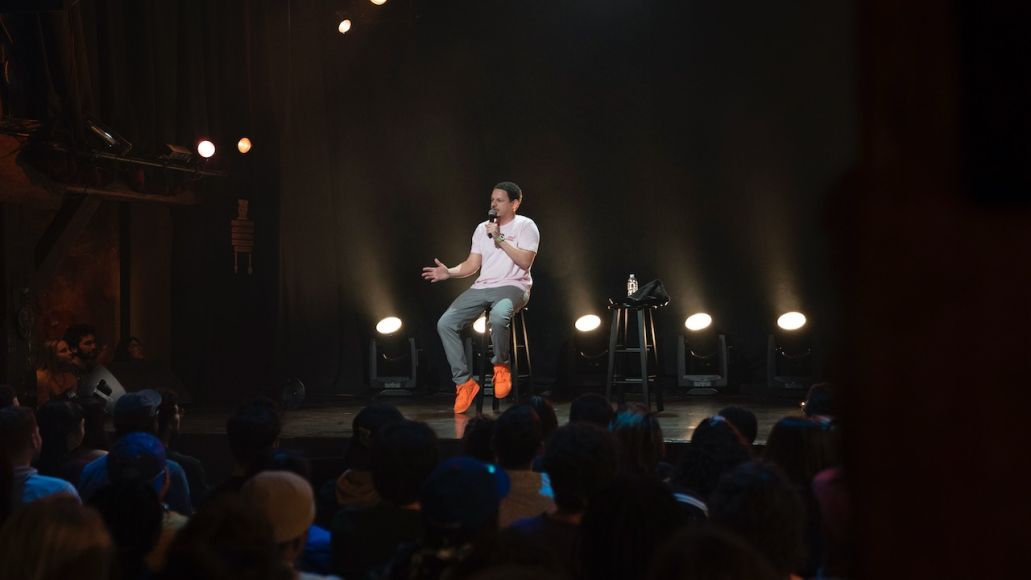 Performance Art: When I say Andre does an impression of a stand-up comic instead of simply performing a stand-up set, it’s in the malleability of the reality of his jokes. He starts bits with well-worn overtures before nose-diving into the surreal. A brief overture of relatable jackknifes into the antisocial mid-sentence: “You guys ever have one of those days where you smoke a big ass joint and blow it right into a baby’s face?” He’ll confess something that appears to be sincere and then wraps it in the unbelievable to cast doubt on the entire premise.

His set-ups tend to be excuses for him to shout and jump around, which is when he’s at his best. The few times the mask slips and he tries to behave earnestly like a guy telling jokes is when the results are less thrilling. Watching Andre is like watching a contact sport with no helmets or knee pads. A few seconds where he does an impression of David Attenborough narrating his life feels like the work of a regular comedian, which is the last thing anyone wants from Andre. His rage at missing the Tupac hologram at Coachella or energetically miming fellatio is almost unbearably funny, and gets funnier as his energy gets crazier. He starts the show sweating and never, ever stops. 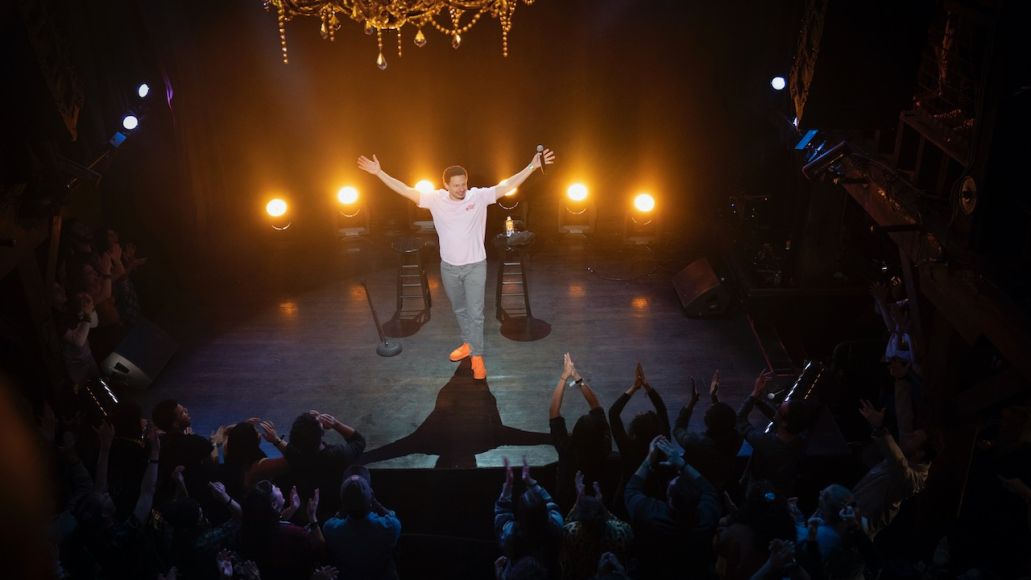 ’90s Kids Know: Andre’s particular sensibility is a beautifully organized catalogue of mismatched social graces, ironic probity, grotesque abandon, and the strangest roll call of pop culture trash. Frequently, he’ll start with an enthusiastic pronouncement about his feminism, police brutality, sex work, or the war on drugs with the bluster of a motivational speaker before indicting himself. He makes sure that he and his body are the butt of every joke, which is helped by the fact that every story Andre tells transcends the usual comedy falseness because it genuinely seems like there’s nothing he wouldn’t do.

His feelings about the police are the real thing, even if all that’s left after his joke about them is a mushroom cloud. His left-field citations, one of the enduring pleasures of The Eric Andre Show (“Ladies and Gentlemen, from Vampire in Brooklyn…”), are charmingly specific and most welcome. Jokes that reference El Chapo, John Wilkes Booth, Tim “The Toolman” Taylor, hotmail, the TV show Cops, and Sammy Sosa create a kind of blender of his the cultural touchstones that assailed him as a kid. They’re both obvious and oddly counterintuitive. Early in the show, he asks the audience the identity of the governor of New Orleans. “Who’s in charge? Bobby Jindal? Malcolm Jamal Warner from The Cosby Show?” He has ’90s detritus hardwired into his brain and questions how we receive so much of our information.

What’s Coming to Netflix in June 2020

Eric Andre Plays a Doctor in Freddie Gibbs & Madlib’s Video for “Half Manne Half Cocaine”: Watch

The Verdict: Just as on television he made a mockery of the extremely staid and white talkshow format, as a stand-up he’s trying to make stand-up a little more dangerous for all involved. It’s a long act of sly subterfuge, erasing the usual safe barrier between himself and the audience. Legalize Everything isn’t the complete success the best of Andre’s work is, but as a first look at what Andre can do to this format, it’s a breath-taking experiment, and more often than not, painfully hilarious.

Where’s It Playing? Legalize Everything is streaming on Netflix.