The Pitch. When I heard that Perry Mason was soon to be gracing HBO, I will have to admit, I laughed. Forgive me, Perry Mason obsessives, but my chief memory of the reruns of the Perry Mason TV show of the 1950s and 1960s (to which this series bears no resemblance) from adolescence is that my father used it on Sunday nights as a sleep aid. Usually, he conked out somewhere during the opening theme. When I stayed up to watch the show, what I saw was a collage of grays, whites, and blacks, a moving gallery of future character actors and movie stars swirling around imperious and determined courtroom lawyer Mason, played by Raymond Burr. Ultimately, there wasn’t anything terribly dramatic about any of it except for Mason’s eyebrows and the occasional blast of wobbly soundtrack.

And yet, the show was an institution, and its key players—lawyer Perry Mason, detective Paul Drake, assistant Della Street, quasi-antagonist Hamilton Burger—all pressure points in a grayed-out moral universe.

Rolin Jones and Ron Fitzgerald’s new origin story decidedly and universally works against this pattern. The reimagining’s purpose is to invigorate the old story, and invigorate it does, immersing us almost immediately in the off-kilter, rococo world of the 1930s Los Angeles demimonde, where there’s always another reason to turn your head. The question, louder and louder, becomes, “Why? Why alter an origin story like this, trying to jazz up a story that might not benefit from jazzing up?” And the answer becomes clear, at least for this viewer: We might not be asking the right question. 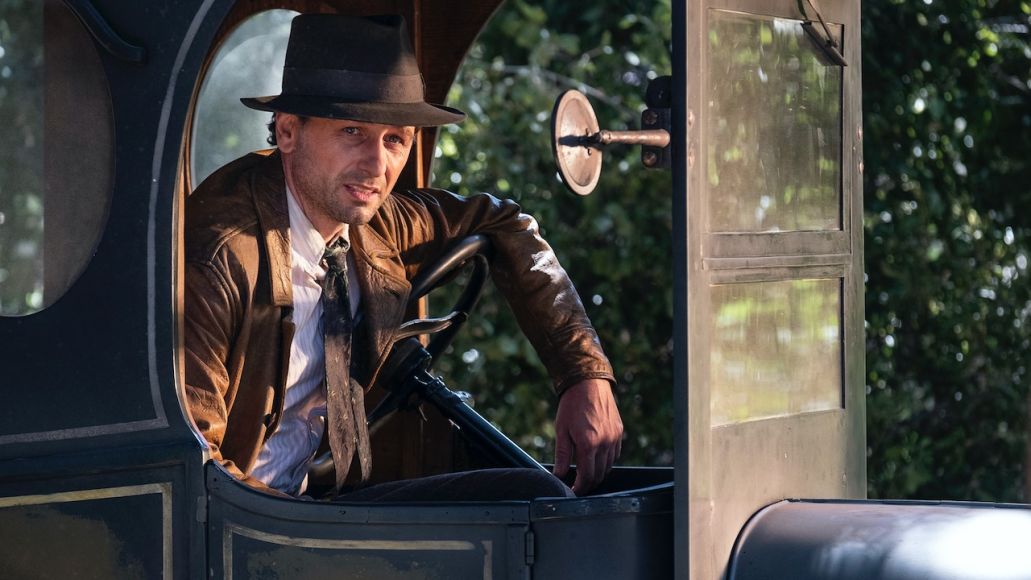 Eat Up, But Watch For Bones: The series is indeed immersive, like a thick black fish stew in which numerous things are reaching varying states of consumer-ability as it cooks. The biggest fish here is, of course, Mason himself. Matthew Rhys is an excellent match for this part, if for no other reason that his face transitions so easily between bland and severe, much like Burr. Rhys is giving us Mason as a younger man, working as a private investigator on cases with varying degrees of dignity. When we first meet him, he’s tailing a Fatty Arbuckle–esque actor and snapping a picture of him licking gooey dessert paste off the privates of a willowy young blond starlet. No sooner does he make a fast exit, dodging the dessert-consumer’s shoe, than he is plunged into the case that will shape the series.

Things happen in this whiz-bang zippedy-zappedy way throughout the series, and yet never does anything here feel too rushed. Rhys himself is a large part of what keeps the series moving forward; he seems very comfortable in the role and has an agility in his delivery (he has mastered the period patois) and his movements that becomes, after a certain point, an element like everything else. But what makes the stew delectable is its production. Production designer John P. Goldsmith has created a dense, faithful period universe here that doesn’t have a back wall. It’s so completely thought-out: the signage, the trolleys, the hats, the vast and grandiose public interiors, the dust on the office furniture. It’s all in there. And cinematographer Darren Tiernan’s sensitive and surprising compositions have a delicacy that complements and calls out the roughness and violence of the proceedings depicted, rather than muting them. 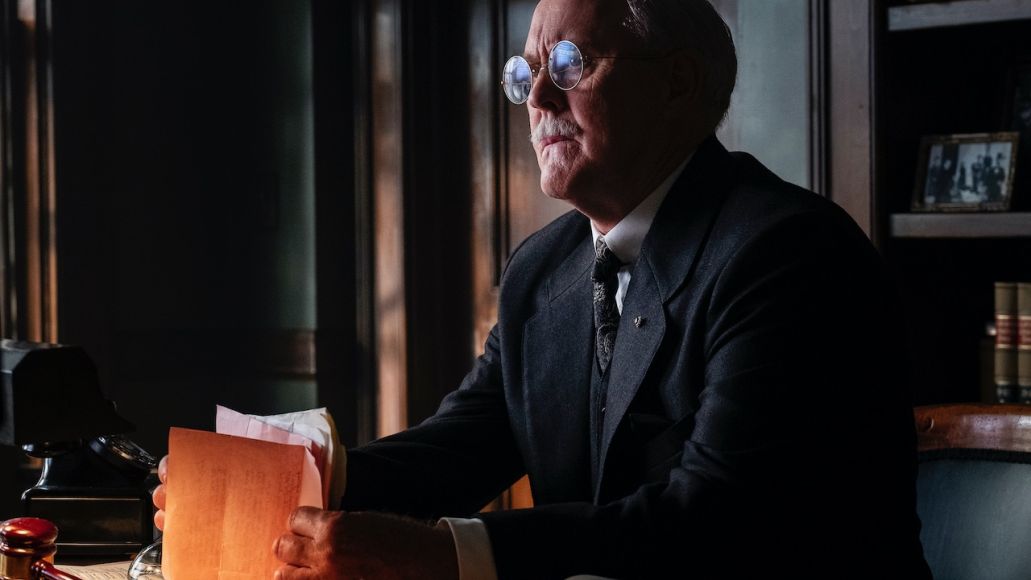 Enter Dead Baby Stage Left: The crime that animates these episodes is a baby killing, and a gruesome one. The parents are represented in court by Mason’s boss, attorney E.B. Jonathan (John Lithgow). Lithgow, although always a live wire, shows more range in this novella of a role than he has in a long time. He is the pied piper to a troupe that includes Mason, secretary Della Street (Juliet Rylance), and Pete Strickland (Shea Whigham), who is more or less Mason’s sidekick. They confer, cuss, discuss, and hypothesize in Jonathan’s office, often with whiskey (verboten due to Prohibition but available to them because, well, this is sleazy LA, where anything is possible). Jonathan is the moral and purposive figurehead here for his more practically minded employees, and Lithgow’s fervor does not disappoint. However, the working bond these public toilers have deconstructs over the course of the series, as we find out more about their real lives and their real, life-complicating struggles.

Take Me to Church: At the other end of the dare-we-call-it-moral spectrum from Perry is Sister Alice (Tatiana Maslany), the leader of a committed local church congregation that is also (surprise surprise) a very lucrative operation. She does it all, folks: She gives a great sermon, she heals people, and she literally does a song and dance for her congregants to stoke their religious faith, their loyalty, and, one hopes, their financial generosity. Maslany communicates a charged trancelike state throughout the series that comes to smell like moral ambiguity as one spends more time with her, as a character; figuring into this complexity is her mother, played here by Lili Taylor. Alice’s mother does the books for the church, and like most people who do books, her preoccupations are secular rather than sacred, i.e., faintly creepy. This is in keeping with the rest of the series; when we aren’t shooting from one plot development to the next, we’re watching the characters ripen like fruits. 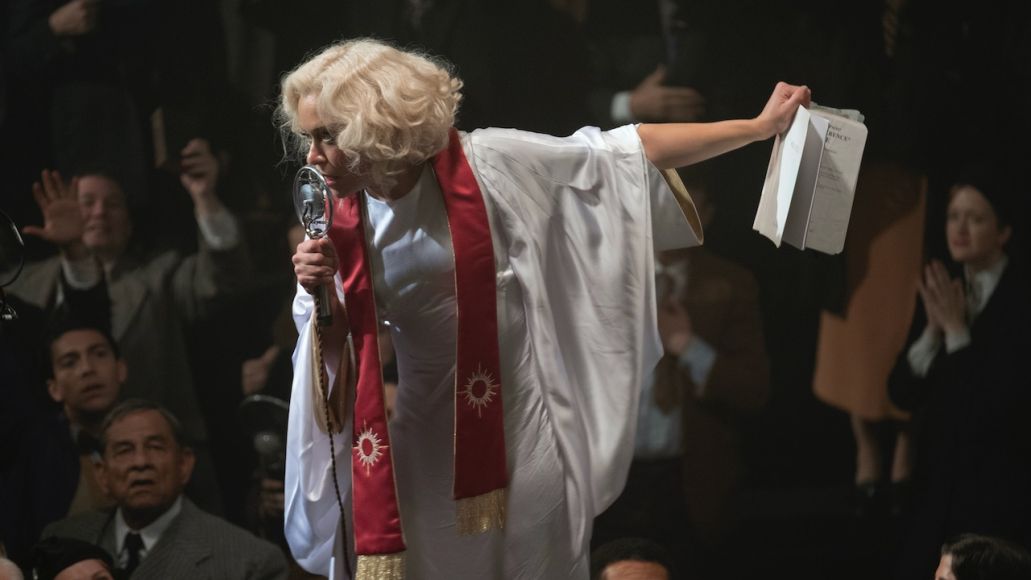 Eat Fruit: It’s Good for You: So, what about that ripening? What do we discover as a result of it? And does it taste good, or should we have just left those fruits on the tree? Questions, questions, but all good ones. Let’s start with Mason, who lives and drinks a lot in a very strange location: his late parents’ farm, next to an airfield. Contradictions abound. Mason is isolated (the house is definitely out in the country, California at its pastoral best) but could in metaphorical theory take off any time he wanted, on a plane to Mexico, given that he’s sleeping with Lupe (Veronica Falcón), one of the pilots, played strongly here by . He is a city denizen through and through, and yet he knows how to slop pigs. Della, to move along the branch a bit, is a lesbian; she lives with her partner in a rooming house. One can only think that the show runners looked at the fact that Street and Mason, in the original series, flirted but never consummated, then looked at Street’s character in the book, divided by 1.5, multiplied by 2, and went with it.

Jonathan, similarly, talks a good game with his employees but is actually falling apart, due to financial and life stressors that he is not necessarily able to handle. Other shifts that might surprise Mason loyalists occur here too. Paul Drake (Chris Chalk), rather than being a side-glancing blind private eye, who serves as Mason’s right hand (as he did in the TV series) is an extremely focused and accomplished Black police officer here who hates Mason and, in fact, punches him in the stomach more than once. Hard. That relationship does, of course, evolve. Hamilton Burger, a lawyer in the series who frequently loses to Mason, is here a godsend who saves Mason a lot of professional hardship and keeps the series going. And he’s gay, a point he and Della bond over when they have a chance. 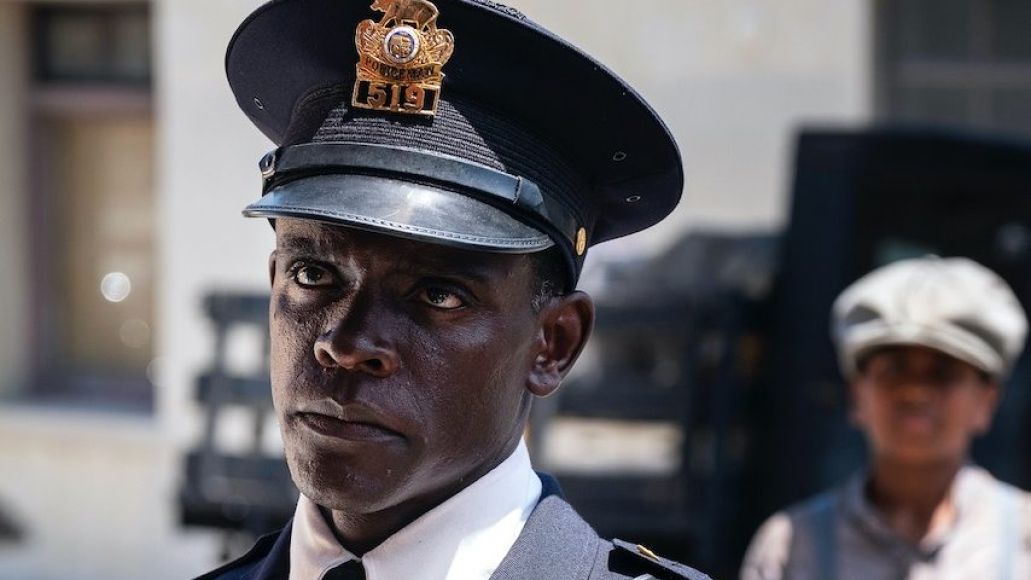 The Verdict. But are all these surprises beneficial? Could it be argued that all of these renovations of the most well-known predecessor of the show are all a bit too much? Especially when crammed into an eight-episode origin story? Is it all too “busy”? As it turns out, those are the wrong questions. The resoundingly popular original book series by Erle Stanley Gardner took things in: it brooked and even reveled in the varying lifestyles and backgrounds of its characters, along with their linguae francae; the TV series, instead, focused on the courtroom, the procedure, the steps, making these elements the source of the vitality it could claim and the primary draw for its sizable fan base.

The question here, then, is: How are my needs being served by these imaginative leaps? And the answer here would be well. It’s beneficial to know Perry lives at his parents’ house, but is also a drunken wreck — it gives him a vulnerability he wouldn’t have otherwise. Drake’s Blackness complicates his relationship with Mason and with city bureaucracy that could only add to the potential future of this series (which the conclusion definitely hints at). Della’s sexual life strengthens and electrifies her work life, making her relationship with Mason all the more provocative and interesting, given the largely conservative texture of the 1930s.

In summation, the experimentation that Jones and Fitzgerald have done here shows their love for the original but also their desire for expansion and their trust that the solidity of the foundation could hold up a story with more layers. Beyond that, it could be just downright entertaining, too.

HBO's Perry Mason Tweaks the Past to Build a More Exciting Future: Review