The Pitch: In the North Atlantic during World War II exists a stretch of water known as the Black Pit. It’s there, beyond the reach of any air support, convoys of American supply ships heading toward a battered Britain are attacked by hunting wolfpacks of German U-Boats. Their only protection in this perilous span of water comes by way of accompanying destroyers. One such ship, the USS Keeling (call sign “Greyhound”), is helmed by Commander Ernest Krause (Tom Hanks), who must safeguard his convoy over the course of 50 hours in his first-ever wartime command.

Adapted by Hanks from C. S. Forester’s novel The Good Shepherd, Greyhound’s subject matter should come as no surprise. The two-time Academy Award winning actor has explored other World War II stories as the star of Saving Private Ryan and the producer of the miniseries Band of Brothers andThe Pacific. To direct, he enlists Aaron Schneider (Get Low), to fashion a war film composed of skirmishes tautly edited to an unnerving effect. Even with a Hanks script written too bare for any additive bangs, Greyhound hums as an enthralling character study.

Full Speed Ahead: Krause is your typical Hanksian character. Totemic of the aspirational virtues Americans strive for, or how we’d like to think of ourselves as, he bravely confronts near-insurmountable odds with humility. A longtime Naval officer, Krause is in his first wartime command. He’s devoutly religious, refusing to eat before muttering a silent grace, and often hesitates with his decision making due to his insufficient confidence. Though he might be the senior ranking officer, the men below him possess greater battle experience, made all the more evident by their puzzled reactions from some of his commands. Krause never celebrates the sinking of a U-Boat with the same jubilation of his crew; instead, he mourns the loss of life. 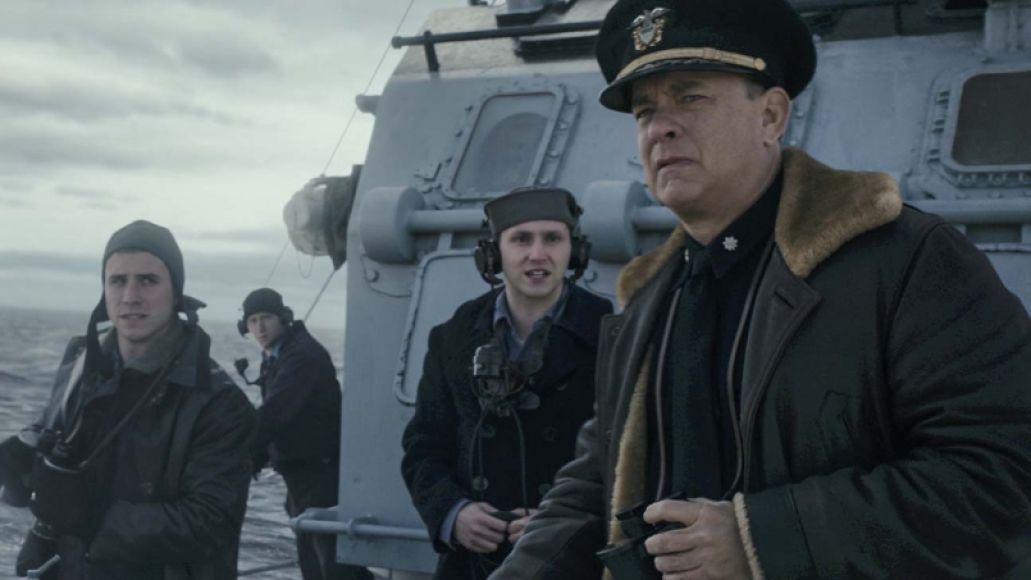 Resultant of the barrage of skirmishes he confronts during the film, Krause’s body withers: His feet become bloody from standing; fatigue clouds his thinking; and the cold gnaws at him no matter how many layers of clothes he adds. Hanks subtly portrays Krause through a quiet physical performance. Weariness floods across his face and he develops a limp and a tender gait to express the weight of command. Whenever a cup of coffee arrives, he holds it with both hands, sipping the blood-pumping liquid for nourishment with the same conviction he exhibited as a dehydrated man in Cast Away.

Damn the Torpedoes: Nearly the entirety of Greyhound is one large battle with smaller skirmishes in-between. Mark Czyzewski and Sidney Wolinsky’s editing during the three main clashes arises from POVs and additional cuts to match Krause’s perspective. They visually narrate the multiple responsibilities swirling around this commander: from the steering of his ship to the relative distance separating the enemy from his convoy, to the reactions of the incredulous sailors under his command.

Also providing immeasurable support in this character study is Shelly Johnson’s murky low-key cinematography, which enlivens the mysterious targets threatening the convoy and demonstrates the vast isolation of the North Atlantic. Blake Neely’s high-pitch score similarly adds unnerving colors. The components, along with the sharp visual effects, heightens the battles into more than simply nerve-wracking deadly clashes. They are the externalization of Krause’s internal fight between his unassured confidence and his will not to rest nor eat, lest he make the convoy vulnerable to the Germans. 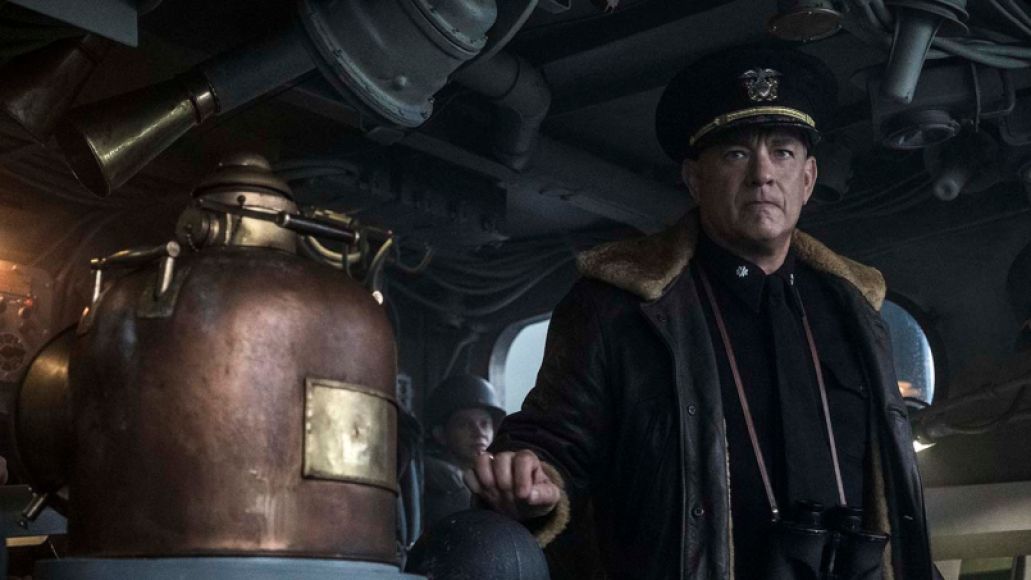 Steady As She Goes: Hanks’ script works to an uneven effect. In other maritime war flicks —The Hunt for Red October, Crimson Tide, Tora! Tora! Tora!, Das Boot, etc.—character-building dialogue traditionally follows in the wake of narrative niches. For instance, though Commander Hunter (Denzel Washington) and Captain Ramsey (Gene Hackman) work to outmaneuver a Russian submarine in Crimson Tide, they are still afforded time, through asides and conversations, to casually craft their characters and the tension between them. Such instances do not occur in Greyhound.

Instead, much of the dialogue stems from the jargon of orders given and orders repeated, call signs and status updates. The whirlwind welcomes sharp dynamics between the cacophonous hail of Navy-speak and the spaces of silence. The strained instances of quiet come by way of Krause’s indecision. When they occur, with only the sound of choppy waves churning around him, his worry teases out the same from sailors and viewers alike. It’s the reality of command, the real push-pull of battle, which Hanks gives breath to in each of his non-verbal beats.

Tom Hanks Urges Mask Use: “Don’t Be a Pussy”

Conversely, Hanks’ screenplay and Schneider’s casting commits the grave error of sidelining great character actors. Rob Morgan — with a recent string of incredible performances in Mudbound, Just Mercy, and Bull — is reduced to an Old Hollywood butler as the mess officer Cleveland. Elisabeth Shue scavenges about four minutes worth of screen time as the noncommittal love interest to Krause. And Stephen Graham is overwhelmingly wooden as Krause’s trusted confidant.

It’s disappointing to see talented names in thankless roles when anyone else could have been cast. Then again, the sparse nature of the script leaves their potentiality fully unrealized. For instance, the opportunity to see a Black man as more than a martyr, or a woman to be something other than a symbolic stand-in for hope. 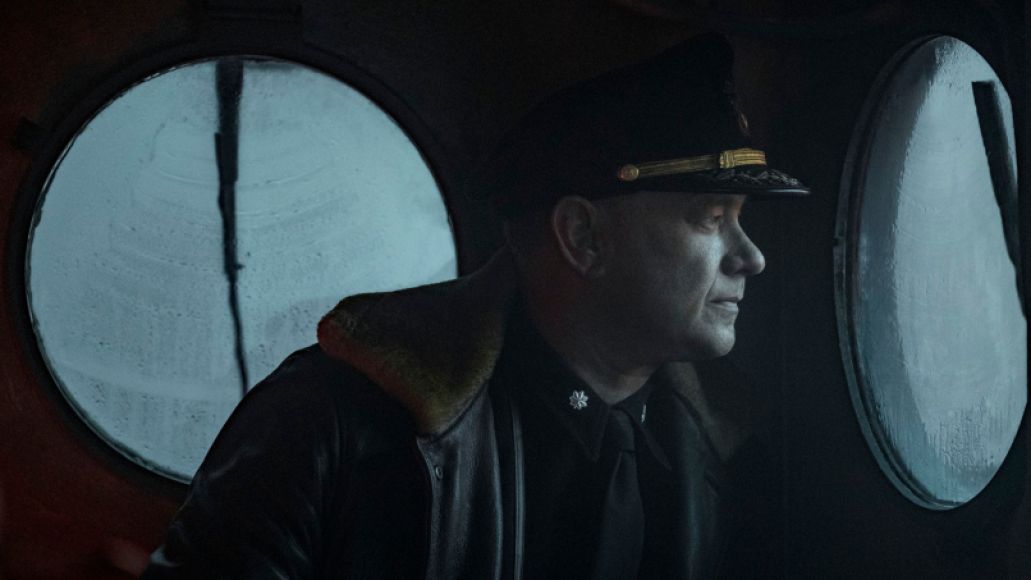 Verdict: Greyhound is the bare essentials when it comes to war films. With little character development on paper, the narrative finds victory through Hanks’ patient physical performance and the craftsmanship within the battles. Rarely flashy, and without a minute wasted over its 92-minute runtime (sometimes to its detriment), Greyhound rousingly hums full speed ahead.