Grimes publicly called out her own boyfriend, Elon Musk, for a discriminatory tweet against non-binary people.

On Friday night, the Space X founder tweeted simply, “Pronouns suck.” It’s unclear what prompted Musk to make such a proclomation, but Grimes wasted no time in calling him out. Just seven minutes after Musk’s initial tweet, Grimes replied to him directly, writing, “I love you but please turn off ur phone or give me a dall. I cannot support hate. Please stop this. I know this isn’t your heart.” 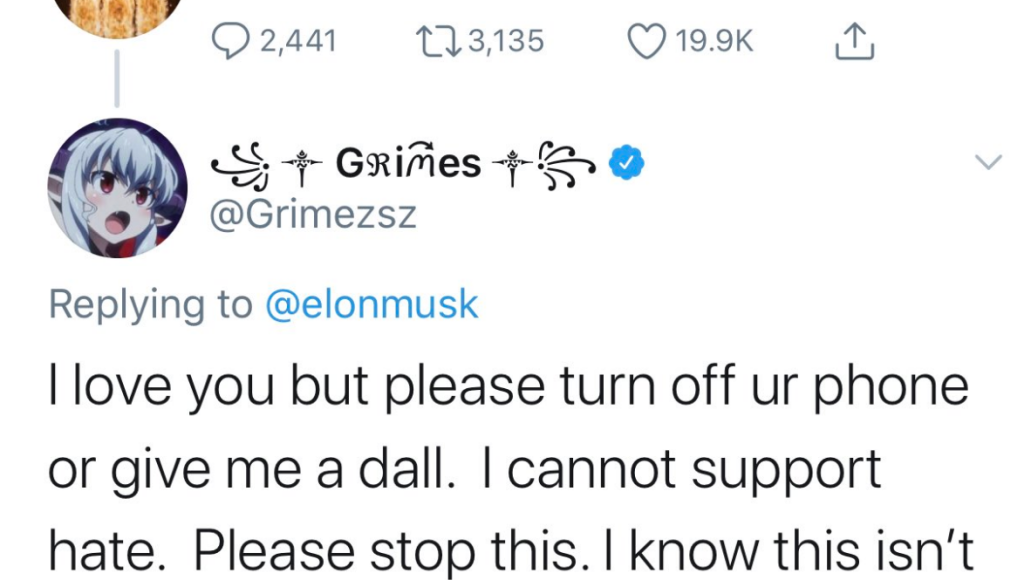 Somewhat awkwardly, their public Twitter spat came just hours prior to the New York Times publishing an extensive interview titled, “Elon Musk, Blasting Off in Domestic Bliss,” in which the Musk spoke glowingly about his relationship with Grimes and the birth of their first child together. “Yeah, she’s pretty special, that’s for sure,” Musk told New York Times columnist Maureen Dowd. “She’s one of the most unusual people I’ve ever met.” He painted the scene of a Saturday night in which the couple watch anime and debate the dangers of A.I.

Asked how he juggles his work at Tesla and Space X while also raising a child, Musk replied, “Well, babies are just eating and pooping machines, you know? Right now there’s not much I can do. Grimes has a much bigger role than me right now. When the kid gets older, there will be more of a role for me. I think just doing what I’ve done with my other kids. If I have a trip for Tesla to China, for example, I’ll bring the kids with me and we’ll go see the Great Wall or we took the bullet train from Beijing to Xian and saw the Terracotta Warriors.”

Elsewhere in the interview, Musk spoke about about another controversial tweet in which he wrote, “Take the red pill,” which some took to be a euphemism for a right-wing political awakening. The tweet sparked the ire of Matrix creator Lilly Wachowski and Grimes’ own mother, but Musk maintains he wasn’t being political. “No, it’s just: Accept reality as it is as opposed to what you wish it were,” he explained.

He also spoke about his endorsement of Kanye West for president: “I’ve known him for at least 10 years, maybe longer.” Musk said, “I’ve done my best to convince him that 2024 would be better than 2020,” noting concerns that Kanye could potentially split the Black vote with Joe Biden. Following last week’s presidential rally during which Kanye broke down crying, and the subsequent message from Kim Kardashian-West saying that her husband was suffering from a bipoloar episode, Musk said he reached out to Kanye.

“[Kanye] called me back and he actually seemed fine,” Musk recounted. “He video FaceTimed me and he was in Wyoming with a bunch of friends. He seemed fine on the call. But it sounds like things are, you know, not fine. There seem to be a lot of issues.”

You can read the full New York Times interview here.

Grimes Calls Out Elon Musk After He Tweets "Pronouns Suck"