Songs That Made Movies Classics is a feature in which we analyze how the use of a single song helped make a film a modern classic. Today, as part of Blockbuster Month, Editorial Director Matt Melis goes back in time all the way to 1985 … time circuits on.

The story behind how Back to the Future got green-lit might actually be a longer and stranger journey than Marty McFly’s own adventures through time. No, the idea for the movie didn’t come to writer-producer Bob Gale while standing on his toilet trying to hang a clock. The creative jolt came when Gale found his father’s senior high school yearbook while rummaging through his parents’ basement during a visit. Intrigued by Gale’s premise, filmmaker Robert Zemeckis, yet to have a film project not flop at the box office, teamed with him in late 1980 on an initial script deal with Columbia Pictures.

Long story short, Gale and Zemeckis would secure funding for their movie and partner with old friend Steven Spielberg’s Amblin Entertainment after Zemeckis raised his profile by scoring a box-office hit with his 1984 rom-com adventure, Romancing the Stone, starring Michael Douglas and Kathleen Turner. What gets lost in that abridgment, though, are fun tidbits like Doc Brown’s DeLorean originally being a time-traveling refrigerator, Einstein was a chimpanzee, and the production infamously started filming with actor Eric Stoltz — and not schedule-conflicted Family Ties star Michael J. Fox — as everyteen Marty McFly.

The whole incestuous love triangle thing? Yeah, that was actually in there from the beginning — purportedly the earliest story contribution from Zemeckis. However, that element was just one of the many reasons the script received so many polite no-thank yous early on. And that disinterest isn’t really surprising. Nothing about Back to the Future made it an easy sell in the early ’80s. Yes, it’s a science-fiction adventure, but one only interested in a single family tree and a small town of no consequence to anyone else; the stakes are huge but on about as small a scale imaginable for a would-be blockbuster. Yes, it’s a coming-of-age tale (though one that needs to travel back to press forward), a father-son story flipped on its head, maybe the most problematic ’80s love story this side of Big, and a buddy comedy between a slacker teen and a geriatric mad scientist. Ya know, that old, tried-and-true formula.

Given the movie’s celebrated status and the classic feel of the story 35 years later, Back to the Future seems like a can’t-miss, quintessential movie both of its time and for all times. But partners Gale and Zemeckis — both three-time losers under Spielberg’s wing before Zemeckis found success elsewhere — had a lot banking on audiences rooting for the McFlys, being charmed by Hill Valley, and embracing storytelling as old as time but with plenty of unconventional wrinkles. Something needed to draw the audience in and win them over early on. As it turns out, what really jump-starts the tale of Marty’s accidental trip to 1955 in Doc Brown’s time machine isn’t plutonium or 1.21 gigawatts from a bolt of lightning but rather a skateboard and a rising blues-rock band from San Francisco.

Back to the Future’s composer, Alan Silvestri — who worked on Romancing the Stone with Zemeckis and would remain a career-long collaborator — was the party to first recommend that singer-harmonica player Huey Lewis and his band, The News, write the film’s opening jam. Thanks to rigorous touring and heavy airplay on early MTV, Lewis had overcome release delays to see the group’s third album, Sports, reach No. 1 and score multiple top-10 hits. The pick made a lot of sense. An aspiring guitarist like Marty, who knows Chuck Berry by heart, would’ve likely been a fan of a blues-rock outfit with hits titled “The Heart of Rock & Roll” and “Heart and Soul” and, being a teen in 1985, no doubt would’ve seen the band all over MTV. It’s no real shock, then — and an inspired bit of product placement that both marks the time and develops Marty’s character — when we see a Sports poster adorning his bedroom wall. 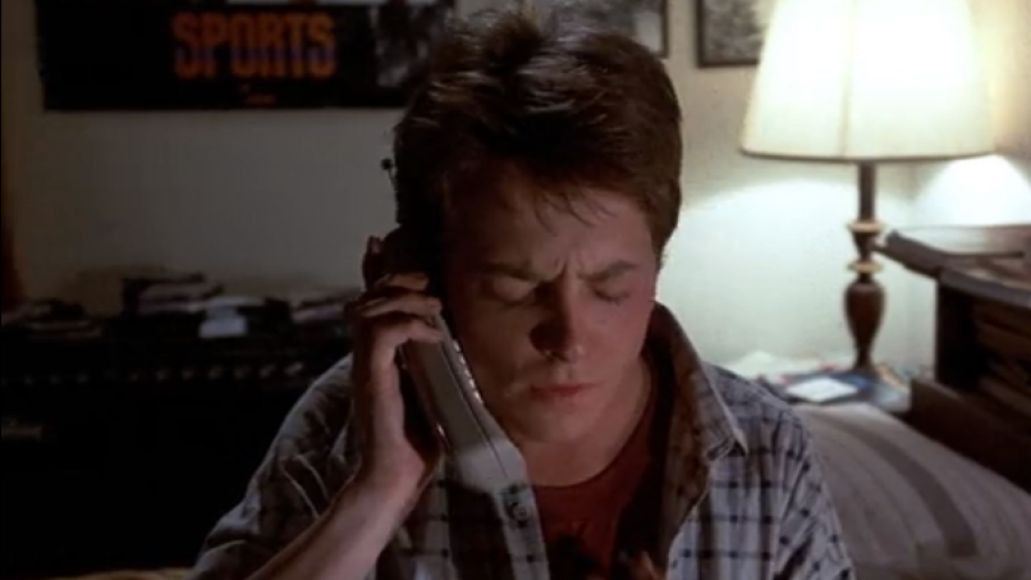 Universal Pictures’ Back to the Future

Even though Lewis’ sound and popularity at the time made him a good fit for the film, he still had to pen a song that felt organic, screamed 1985, and could carry our first real moments alongside Marty. After rejecting his first attempt, Amblin fell in love with “The Power of Love”, despite the fact that the song’s lyrics didn’t include the film’s title in them. (Lewis would appease them somewhat with his second contribution to the movie, “Back in Time”, which directly alludes to Doc and Marty’s adventures. In addition to rolling over the movie’s closing credits, the song cleverly plays on the radio to awaken Marty back in 1985. It’d also get reworked a few years later as the theme song for Back to the Future: The Animated Series.) Armed with righteous ’80s keys, a swinging groove, and a chorus that sticks like gum to a sneaker bottom, “The Power of Love” just needed a sequence. And, boy, did Zemeckis, Gale, and Spielberg have just the right opening scene: the coolest commute to school in movie history.

Back to the Future Stands the Test of Time

10 Years, 10 Questions with Huey Lewis: On Sports, Back to the Future, and Meniere’s Disease

Spielberg’s name has been attached to some of the most visually stunning images in popular film: the great white surfacing for the first time in Jaws, Indiana Jones stumbling in front of the boulder in Raiders of the Lost Ark, Elliott and E.T.’s moon-silhouetted bike ride, and the pan up to the brachiosaurus in Jurassic Park. The list goes on. And, somehow, it’s fair to say that Marty’s hitchhiking skateboard ride though Hill Valley ranks in there somewhere. As soon as Marty glides out of the Burger King drive-thru and latches onto that Ford pickup truck, part of us smiles inside. As he switches vehicles and waves at an aerobics class — “The Power of Love” pumping in his headphones and pulsing through our own bodies — we understand that Marty sees the world a bit differently than others. The jump to first-person camera puts us on the skateboard behind that jeep, drawing us into the liberation of the moment, and when Lewis doubles down on the line “Don’t need money/ Don’t take fame/ Don’t need no credit card to ride this train,” it feels like an invitation to come along for the ride.

Part of the scene’s success also stems from its time. In 1985, MTV was at the height of its popularity and influence, determining everything from chart-climbers to trends in popular fashion and hairdos based on airplay. Whether the film’s creators realized it or not, they were basically shooting footage for what would become a de facto music video, rather than just an opening sequence in a movie. It’s a format Lewis and the News had ridden to national stardom and one that audiences of that time were both familiar with and ravenous for. From the simple premise of being late for school and kicking Doc’s gate open like a guitarist might kick the air to Huey Lewis’ cameo and meta shtick about Marty’s band playing the opening to the News frontman’s own song “just too darn loud,” it all smacks of mid-’80s music television. There actually is an official video for “The Power of Love” — featuring a gimmicky Christopher Lloyd cameo, in which Doc Brown crashes a Lewis show in his DeLorean — but it trades all of the movie’s organic magic for a cheap plug.

For those who haven’t seen Back to the Future in a while, it’s easy to forget that Zemeckis interrupts the song before letting Lewis and the News finish. In the interim, we meet Jennifer, see Marty’s run-in with Principal Strickland, and watch his band, The Pinheads, flounder at their Battle of the Bands audition. It’s really amazing how much gets packed into that interlude before Jennifer cues Lewis by leaning in and kissing Marty. We learn of the clock tower’s electric history, get warned about Marty’s relationship with Doc, and, most importantly, witness the lack of self-confidence that has hamstrung so many McFlys over the years, keeping them from realizing their dreams and instead toiling beneath the Biffs of the world. There’s something about Marty, though, and what we learn during that opening sequence that makes us believe he could be the one in the family to finally break that cycle. “History is gonna change,” Marty tells Strickland about an inch from his face, and as we watch Marty tailgate home on his skateboard to “The Power of Love”, we sense a spark in him that won’t be extinguished.

Nearly four decades later, “The Power of Love” and the opening skateboard scene from Back to the Future remain inextricably bound. You can’t think of one without the other, and it’s been a good partnership for all involved. The song scored a No. 1 hit for Huey Lewis, earned him an Academy Award nomination, and gave him a beloved calling card to thrill live audiences with for decades to come. For Gale and Zemeckis, it’s a doubling-down on the original script’s warmth and a tacit promise to audiences that if they only tag along with Marty, they’ll experience a one-of-a-kind adventure. It’s a promise they keep and one that feels very much in the spirit of Lewis’ song. Whether it’s trying to teach your pops to live his best life, slugging the butthead taking advantage of your future wife, or helping a young friend lost in time, Back to the Future has always been fueled by the power of love.

Fountains of Wayne's Adam Schlesinger Brought Wonder to That Thing You Do!

Simon & Garfunkel's "The Sound of Silence" Takes Us Inside The Graduate