Blockbuster Month is celebrating the true titans of the genre. All month long, you’ll read through a variety of features digging deep into the greatest hits of Hollywood, from popcorn classics to underrated gems. Today, Andrew Buss takes a slight detour and revisits a blockbuster contender with this hilarious oral history on 1990’s The Freshman.

On July 20th, 1990, The Freshman hit theaters with all the right pieces. It had solid pitch, one of Hollywood’s sharpest scribes in writer/director Andrew Bergman, and ’80s icon and heartthrob Matthew Broderick. To top it all off, the mob comedy managed to even wrangle the Don himself Marlon Brando, who had all but retired by that point.

It wasn’t a summer blockbuster, but it was a success for TriStar. Critics loved it, audiences enjoyed it, and the box office returns managed to nearly double the budget. In the years since, however, it has garnered a cult following, and many view it as one of the last great works of Brando’s legendary (and oft-puzzling) career.

To commemorate the film’s 30th anniversary, we recently spoke with writer/director Andrew Bergman, producer Michael Lobell, and star Matthew Broderick. Together, they shared a number of stories, from an infamous dinner between Brando and John Gotti to how they got those damned lizards to move throughout the shopping mall.

Read below and remember you’re never too old for this nonsense.

ANDREW BERGMAN (WRITER/DIRECTOR): There was a clipping in a newspaper, sometime in the late ’70s to early ’80s, about a mafia guy who had been arrested for smuggling endangered species into the country. I cut the clipping out and said, “Well, there’s something here. It’s a great, bizarre notion.” A guy named “Fat Vinnie” Teresa was the guy who had been arrested in Seattle. You have these ideas and they get filed somewhere and you trot them out when they become useful. When they bloom. So, that was the story with this one.

MICHAEL LOBELL (PRODUCER): For The Freshman, when [Bergman] wrote the first draft — and he’s always been great about doing rewrites —  he would give me the first draft and I would make comments. This happened all through the years. So, the first draft wasn’t right. If I remember correctly, it had an Asian theme. But finally, when he got going on the second or third draft, it became really, really close to what it is.

BERGMAN: It was a very tough script. The script took me forever to write. I painted myself into one corner after another. But it turned out ultimately.

LOBELL: Originally, [Brando’s] name was not Carmine. His name was something like Jimmy. And when I read it, he said to me, “I think we should get [Jack] Nicholson to play Jimmy.” And I said, “Nicholson? I read the thing twice. It’s Brando.” And he paused, which is a great habit of his, and then he started laughing. He said, “Brando. Oh my God.”

BERGMAN: He said, “Why don’t we send it to Brando? What’s the worst that happens? He says no.” 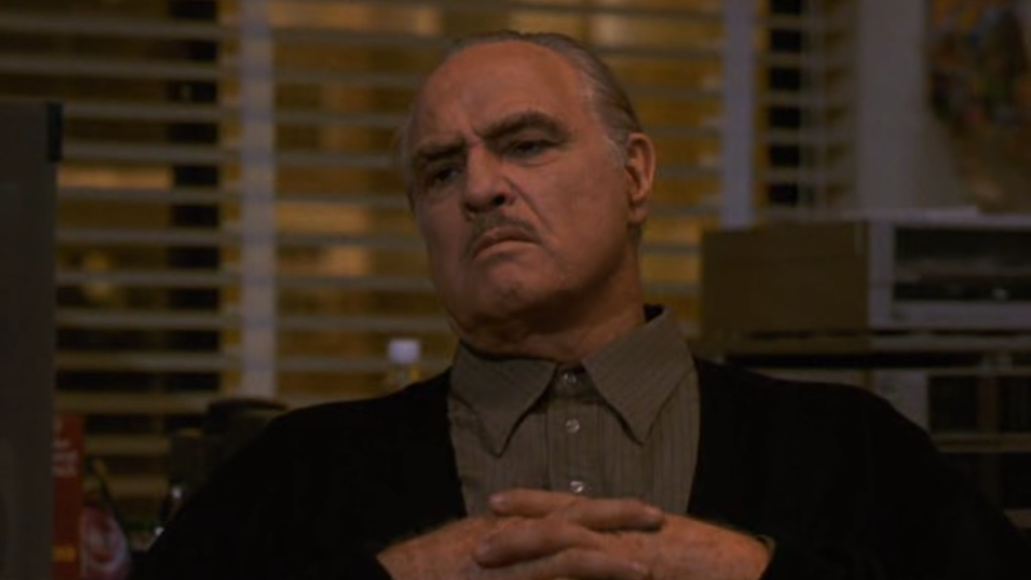 LOBELL: And I knew Brando’s great friend and ex-agent Jay Kanter, who was involved with Alan Ladd Jr. for years at The Ladd Company and at 20th Century Fox. So I said to Andy, “I’m going to get the script to Jay.” So I got the script to Jay and I said “Jay, I know Marlon hasn’t worked. He doesn’t want to work. Blah blah blah.” But Jay read it and he called me back a day or two later and he said, “This is the funniest thing I’ve ever read. It’s hysterical. I’m sending it to Marlon.” I said, “Great.” So I told Andy and he said, “Okay. Let’s see what happens.”

BERGMAN: And [Brando] read it and said he really liked it. And then a couple of months later we flew to Tahiti and closed the deal.

So we called David Madalon, who was the head of Tri-Star at the time, where we developed this. And I said to him, “David, how would you feel about Marlon Brando playing Jimmy?” And there was a pause and he said, “I just got goose bumps. What’re you talking about?” And I said, “Well, he read the script and he wants Andy and I to come to see him in Tahiti.” And he said, “He’s never going to do the movie, but I approve the trip.”

Which, by the way, would never happen today. 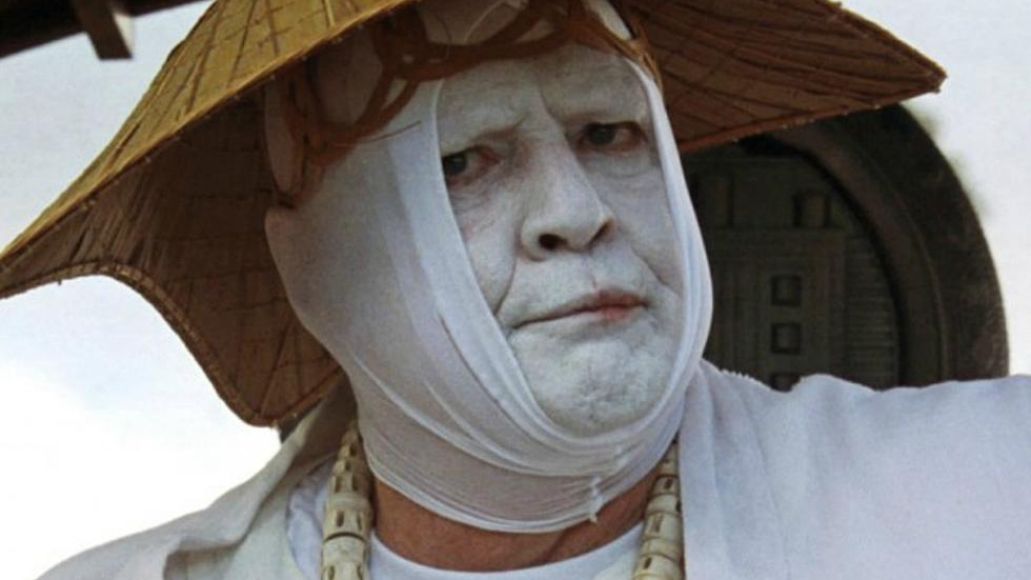 With a blessing from the studio, Bergman and Lobell flew off to Tahiti. As the plane neared Brando’s island, Lobell said they could see the star “wearing sort of a moo-moo wrap around, with his thumbs in his ears, sticking his tongue out.”

During the trip, they wound up having long conversations with Brando about the part, went snorkeling, had dinners where Brando recited dialogue from On The Waterfront, and regaled them with stories. Eventually,  talk turned to the script.

LOBELL: He took us to his cabin, which wasn’t any more upscale than where we slept. There was a small bookshelf, some chairs — it was very simple. We sat around in the chairs and we talked for quite a while. A long time. Among the things he said was, “If I do this, I can’t have the name Jimmy. It’s too normal an Italian guy. I need something special.” Which is why he became Carmine, by the way.

Just before we were going to leave, Andy asked him where the men’s room was. So, he sent Andy to the men’s room, and I guess because Marlon had this old-fashioned idea about producers, he leaned over to me and said, “Listen, I want $3.3 million for the movie.” [Laughs.]

BERGMAN: It was relatively an easy get to get him. I was shocked by how easy it was. Not just surprised. Shocked.

LOBELL: Andy came up with the idea when Matthew and Bruno [Kirby] go into the club and Matthew says, “Oh my God, he looks just like…” And Bruno covers his mouth because he was going to say The Godfather. That was not in the script. Andy put that in there to make it work [with Brando looking like Corleone]. And it made the whole thing work. 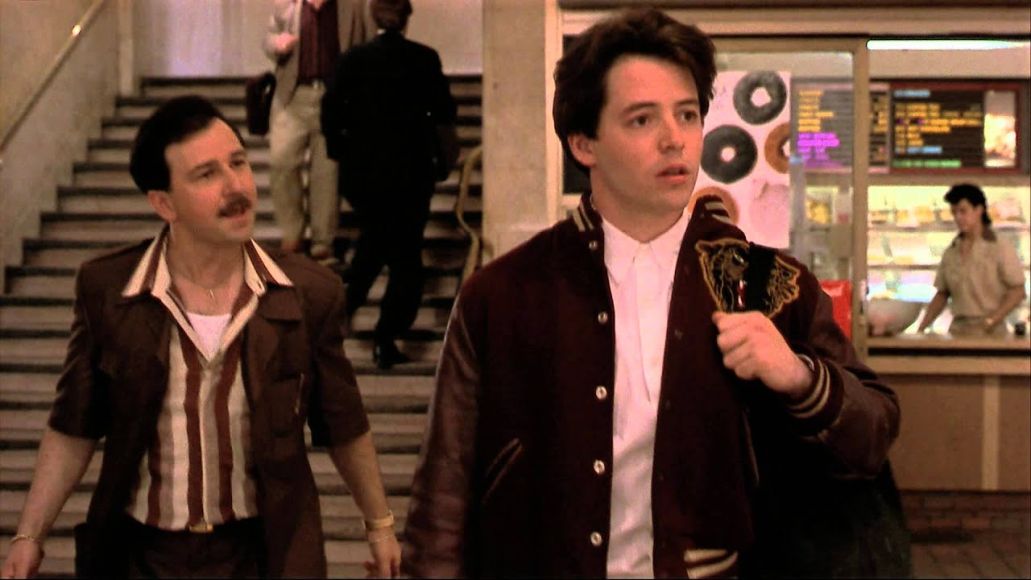 Now that they had their secret weapon in Brando, they could literally get anybody they wanted for the film. And when we say anybody, we mean anybody.

BERGMAN: We thought of Robert Downey Jr., who was playing that type of role at that point. Michael J. Fox was certainly a possibility. Those were the contenders. And they all would’ve been great. And Matthew was like the hottest guy going at that period. It was after Ferris Bueller and all that stuff. And he was a hard get.

MATTHEW BRODERICK (“CLARK KELLOGG”): I was very aware of The In-Laws. I knew who Andy Bergman was and I really admired him. So an Andy Bergman script is already pretty exciting. But then they said Marlon Brando would be playing Sabatini. And I remember I thought, Well, Marlon Brando is never going to do this movie. That’s what I always thought.

BERGMAN: Literally, I showed him pictures of me and Marlon. And then he committed to the picture once he knew Marlon was going to be in it.

BRODERICK: My only hesitation was, “Should I be playing a college guy?” Because I was sort of concerned with trying to move on to more adult roles. When you’re young, you’re worried about the next thing: “How do I transition out of teen stuff?” So, if I had any qualms with it, it was just that. But I always loved the material.

BERGMAN: I always said it was like ringing a dinner bell in front of the cowboys. Once Brando was in the movie, you could get any actor you wanted for any part.

LOBELL: And then we had Bruno, who had played Young Clemenza in The Godfather. So Bruno, he didn’t even read the script yet. We met in a bar at a hotel. Bruno grew up in New York, and he was real skeptical. He said, “So you guys have Marlon Brando, huh? Really?? You have Marlon Brando?” He totally didn’t believe us. Because nobody had Marlon Brando for 10 years. He said, “I told my agent ‘If Brando’s in the movie, I don’t even have to read the script. I’m doing it.’”

BRODERICK: Bruno and I turned out to both be from New York City. He was from Hell’s Kitchen, I was from Greenwich Village. So, a little bit different. But we did grow up in New York around the same time. His father was an actor, my father was an actor. And for whatever reason, from the time we basically met, it seemed like we had known each other for 30 years. I don’t know why that is, but that’s just how it was.

BERGMAN: He and Matthew became fast friends. They were friends until Bruno died. Close friends. And you could see that in the movie. You just see it. You see that develop, that relationship.

BRODERICK: He knew all the sort of connected guys in Little Italy and stuff from doing Godfather II and I think other movies at that time. He was very into preparation and into getting the hair right, the clothes, every ring he had on his fingers. He did a lot of research. And we would tease each other because I basically did no research ever. But he was very prepared.

LOBELL: We read a bunch of girls for the part of Tina Sabatini. Andy and I saw Penelope Ann Miller do Our Town on Broadway together. She was just fabulous. Right at the time we were casting the movie. We also read Marissa Tomei, who was fabulous, but she was too young. And we finally read a few of the girls with Matthew. And when we decided on Penelope, we told Matthew and he said, “I knew you were going to choose her.”

LOBELL: Another great moment for me was Maximillian Schell, who was sort of an icon in the business, who played Larry London. When Marlon did The Young Lions a 100 years ago, Max was a young German actor. They were casting the part of this young German and they brought a lot of actors in. Along with the director, Marlon was responsible for picking Max, and they hadn’t seen each other since that movie.

Max never forgot that Marlon had helped him get that part, so when Max arrived, he told me, “I want to say hello to Marlon.” So I brought him over to Marlon’s trailer, I knocked on the door, and said, “Marlon, somebody here wants to see you.” And Marlon came out, they looked at each other, they hugged each other, and they had tears in their eyes.

An Oral History of The Freshman: Matthew Broderick, Andrew Bergman, and Michael Lobell Revisit the 1990 Comedy