You may think it’s a sign of our perpetually insane times that a member of the Trump administration somehow managed to kick up a feud with a cartoon character. Nevertheless, Trump’s Senior Legal Adviser, Jenna Ellis, recently tweeted that Democratic VP candidate Kamala Harris “sounds like Marge Simpson.” This prompted Marge, ever the consummate (albeit imaginary) professional, to issue a polite but cutting response, criticizing Ellis for resorting to name-calling, something she discourages in her young children, and for disrespecting suburban housewives.

That might seem like the latest bizarre cut from the never-ending “greatest hits” of 2020. But The Simpsons, and Marge in particular, have long found themselves entangled with real life political figures, most of whom, like Ellis, underestimated just who they were messing with.

It’s a trend that goes all the way back to 1992, when then-President George H.W. Bush expressed his desire to see the American family move “closer to the Waltons than the Simpsons.” In response, the show struck back, with a clip that featured Bart remarking that his family was “just like the Waltons — we’re praying for an end to the depression too.” It was a signature moment of the series’ early years, but it wasn’t the start of the family’s quarrel with the Bushes.

Two years before President Bush moved to Evergreen Terrace in 1996’s “Two Bad Neighbors”, Marge and Barbara Bush had become a pair of unlikely pen pals. People quoted the First Lady pronouncing The Simpsons as “the dumbest thing [she’d] ever seen.” Then, as she’s wont to do, Marge stood up for her family (with the help of the show’s peerless writers’ room). 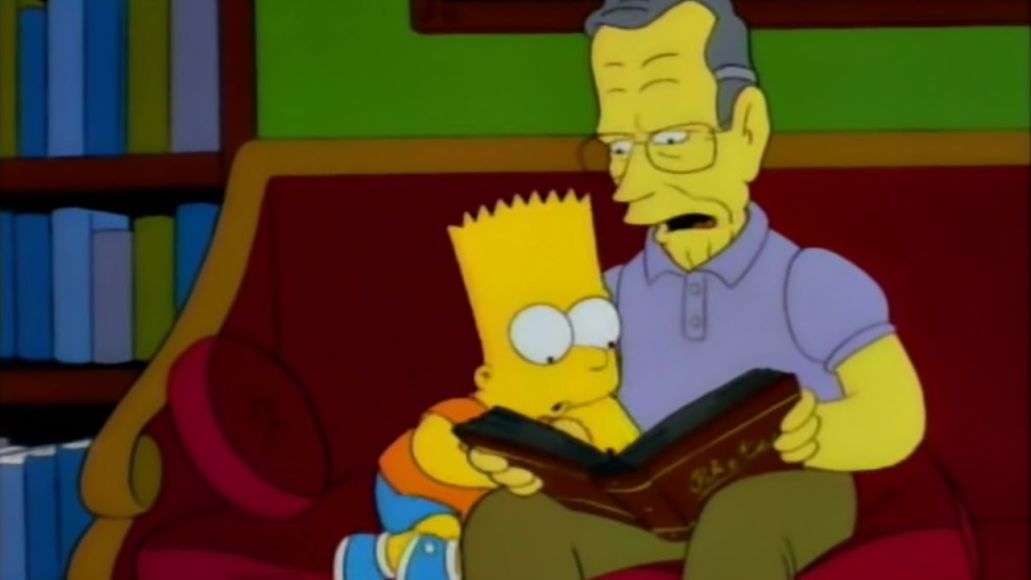 She composed a letter to the First Lady, describing her “deep hurt” over Barbara’s account. Marge wrote that she always taught her kids to give people the benefit of the doubt and not speak ill of them, “even if they’re rich.” She commented that if the Simpsons were the peak of idiocy Barbara had witnessed, “Washington must be a good deal different than what they teach me at the current events group at the church.” And she closed by stating that she’d always believed the two women had much in common, “living our lives to serve an exceptional man,” each with little compunction about speaking their minds.

It’s the right combination of the warm-hearted and the pointed that characterized The Simpsons in its glory years. The letter moved Mrs. Bush, who even deigned to respond to her ink-and-paint counterpart. Barbara, not lacking in grace herself, complimented Marge on the “nice family scene” she and her children exemplified, praised her for “setting a good example for the rest of the country,” and even apologized for her own “loose tongue.”

That loose tongue was surely firmly planted in cheek when penning a letter to a fictional character, but the point stood. Whatever else you could say about the Simpsons, they were a loving (if dysfunctional) family: working class, grappling with more than their fair share of problems, but also seeming relatable to so much of the country in how they spoke to the laughs and struggles that countless families dealt with every day. Even the First Lady came to recognize her blue-haired counterpart as a symbol of something good in American life — parents who do their best to instill good values in their children and stand up for what they believe in.

It wouldn’t be the last time the Simpsons would find themselves unexpectedly the subject of discussion among their representatives in Washington. In 2018, Texas Senator Ted Cruz — who’s no stranger to receiving slander from the Trump camp himself — opined that “the Democrats are the party of Lisa Simpson and Republicans are happily the party of Homer, Bart, Maggie and Marge.”

Cruz, who’s made his own painful attempts to sound like Simpsons characters, nevertheless missed the mark in characteristic fashion. Setting aside Cruz‘s obliviousness to casting the smartest Simpson as a member of the opposing party, he misjudged the rest of the family too. It’s unclear why anyone would want to claim Homer as a supporter, a man who once backed Ralph Wiggum for President and doesn’t even understand “the electrical college.” Bart, on the other hand, is a self-styled rebel and troublemaker, qualities that made him the arch-nemesis to the first President Bush. (In fairness, ol’ Ted may have had a point with Maggie, given her surprisingly consistent penchant for firearms.)

Most of all, though, Cruz missed the boat with Marge. In one of her earliest and greatest moments, Marge took a public stand in favor of her state’s hard-working, long-serving Democratic governor, Mary Bailey, and against the billionaire outsider running on the Republican ticket. (Only this time it was Mr. Burns rather than his golden-pompadoured equivalent). What’s more, Marge voted twice for Jimmy Carter, supports gay marriage, and even led feminist rallies in high school. Cruz’s gaffe is another example of politicians channeling the legendary series, and its blue-bouffanted mom, without really understanding either. 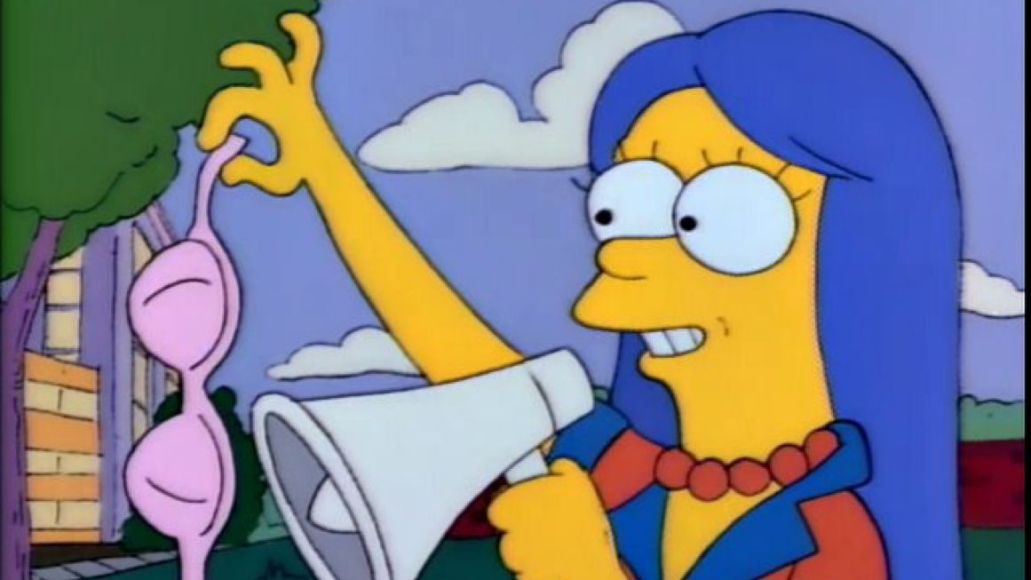 With that in mind, it’s worth zeroing in on why Ellis tried to paint Harris and Marge with the same brush. Maybe Ellis is literally just claiming that the veep candidate and Simpson matriarch have similar voices, with the comparison meant as a dig. If so, not only is the likeness difficult (if not impossible) to hear, but it’s the exact sort of petty insult through which this administration debases the office of the presidency on a near-daily basis.

But there’s something deeper to Ellis’ efforts to draw a line between Harris and Marge. Marge isn’t one of the “cool” characters on The Simpsons. She doesn’t have a signature line or catchphrase (beyond her trademark murmur). She’s less of an extrovert or mischief-maker on the show. Instead, she’s more likely to warn her family about the trouble they might cause than to instigate it. Ellis’ comparison reeks of the standard efforts to paint women in general, and mothers in particular as, well, lame — just one of several dog whistles already being blown in Harris’s direction.

When Homer Defended Strippers: On The Simpsons’ Surprising and Progressive Feminism

And yet, if people like Ellis looked closer at Marge, they’d see the unwitting compliment they’re paying Harris. Marge is the unsung hero of The Simpsons, the member of the family who holds everything together and is, most importantly, the heart of the show. It’s not easy to wrangle a dopey husband, a hell-raising son, a bright-yet-misfit daughter, and a young baby into a functioning family unit, but Marge does it with dedication and grace. Obviously she is a fictional character, but she represents so many real-life women out there, responsible for the thankless but no less necessary work that is, quietly, the foundation of our society.

Beyond Marge’s own accomplishments, which past episodes have framed as vital to the fabric of Springfield, she manages to raise a Chief Justice of the Supreme Court, an international rock star and, most notably, a future President of the United States (forced to clean up a budget crunch caused by Donald Trump, no less). More to the point, she exudes a sense of devotion, decency, and empathy, qualities all too lacking in the current political moment. If Ellis had an ounce of the integrity and compassion that Marge represents, she’d never stoop to sending tweets like the one that started this cartoon feud. And if our leaders spent more time emulating Marge than slamming her, we’d all be much better off. That sounds pretty darn good to me.

A Brief History of Marge Simpson Versus Washington