The Pitch: When we last left the sprawling cast of Eric Kripke’s cynical tale on celebrity superheroes, the Boys had been scattered to the wind and The Seven were reeling from its own internal shakeups. Thinking their leader, Billy Butcher (Karl Urban), dead, Hughie (Jack Quaid) tries to keep the rest of the team together in hiding, all while occasionally meeting with his erstwhile girlfriend/reluctant Seven member Starlight (Erin Moriarty).

With Translucent dead, the Vought Corporation (now under the leadership of Giancarlo Esposito’s calculating CEO, Edgar) struggles to maintain public favor in the wake of Season 1’s scandals. Not only that, Compound V, the material that makes people into supes, is now in the hands of “super-terrorists” — which provides a convenient villain for Vought to use to rehabilitate their heroes’ damaged reputations. Enter Stormfront (Aya Cash), outspoken feminist and social-media-savvy millennial, whose brashness threatens to upend Homelander’s (Antony Starr) sociopathic stranglehold on the team and the company.

Of course, the star-spangled sociopath has his own problems, what with the discovery that he’s fathered a potentially-super-powered child with Butcher’s presumed-dead wife, Rebecca (Shantel VanSanten), and his desire to take a larger role in the boy’s life. 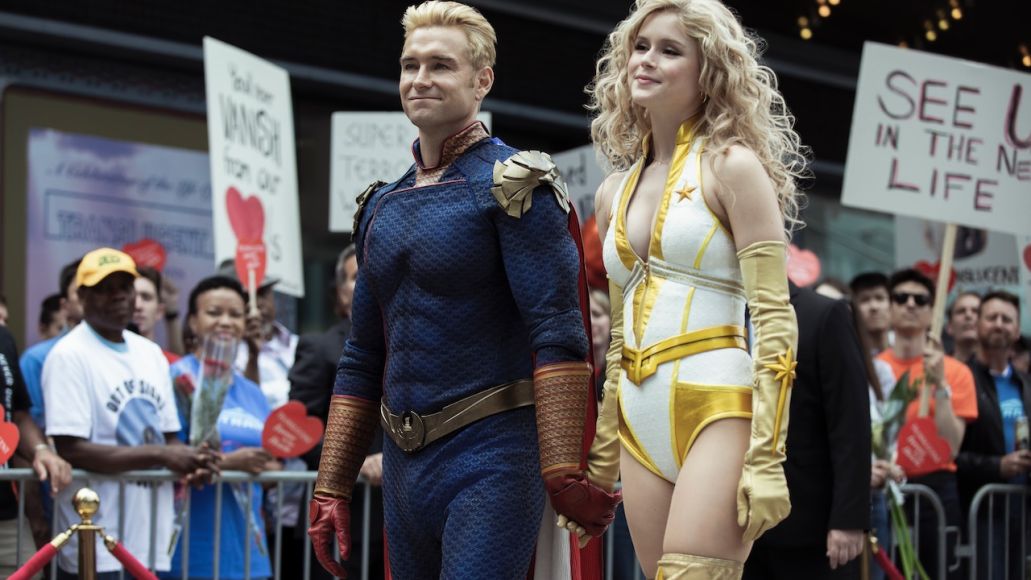 Even Heroes Need a Hand Once in Awhile: The Boys’ first season was messy, but carried oodles of potential. All of the politicking and satire around the Seven, with their media-curated personas and flocks of publicists and consultants managing their respective images, made for incisive takes on everything from #MeToo to the corporatized feel of the DC and Marvel universes. Less effective, though, were the Boys themselves, acting as little more than antagonists in their own stories, despite Urban and Quaid’s range.

Luckily, in Season 2, the show’s gotten more focused on character than the object of their satire, and juggles its myriad storylines with a more graceful hand. With the worldbuilding out of the way, Kripke and co. can mess about with some of the show’s more underserved characters, like Tomer Capon’s Frenchie and Karen Fukuhara’s mute supe ally Kimiko, who secretly become the heart of the team. Plus, now that Quaid’s Hughie has been put through his paces, he and Billy’s dynamic builds in nuanced, albeit obvious, ways: Hughie’s the canary in the coal mine, the person who lets Billy know when his unscrupulous methods are going too far. Both actors are having a blast, though they sink more into the ensemble this time.

Granted, it’s still a mess at times; every third episode tosses up a “Previously On…,” which is odd for a streaming show you’re probably going to binge in a weekend. Plus, The Boys remains one of those streaming-service shows that insists on making its episodes 60+ minutes long, which leads to a lot of filler. (Bring back the 45-minute episode, I beg of you!) This is most deeply felt in the first two episodes, which scrambles to pick up the pieces from the finale and gradually get The Boys back together. 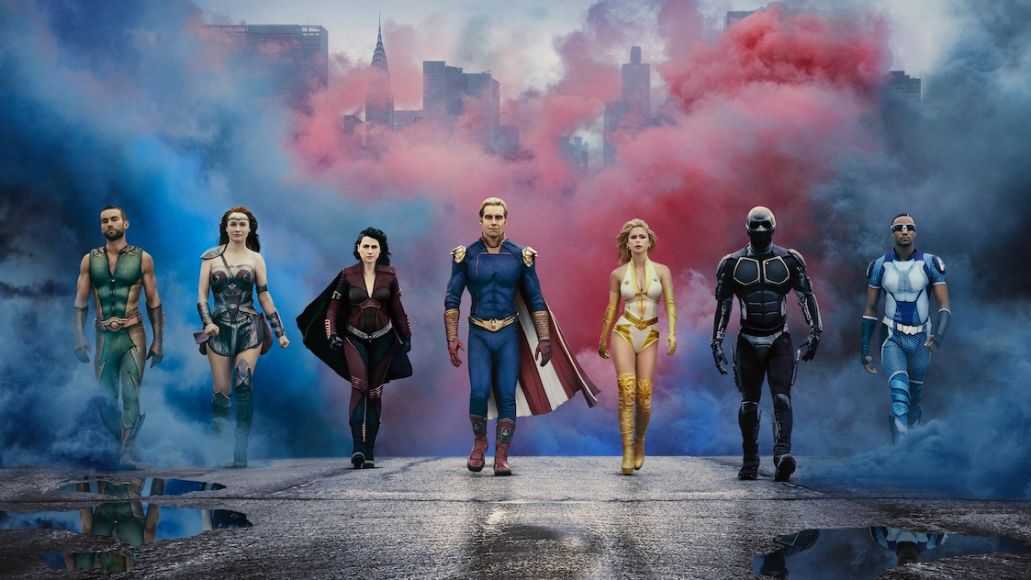 Only the Good Die Young: Once it does, though, The Boys fires on all cylinders, especially in its middle stretch. Starr remains the show’s secret weapon, his Homelander effortlessly balancing the authoritarian impulses of a super-powered psycho with the narcissism inherent to styling yourself as America’s Golden Boy. When the show sees fit to dig into the darker recesses of his brain and explore his self-obsession and poor impulse control (including his dalliance with a shape-shifting supe who can form into anything Homelander wants to fuck, including himself), it’s never better. Luckily, the rest of the Seven get more interesting things to do as well, from the Deep’s (Chace Crawford) post-#MeToo ousting leading him into the arms of a Scientology-like cult that loves Fresca to Queen Maeve’s (Dominique McElligott) queerness being commoditized for PR purposes. (Finally, some frank talk about bi erasure, even if it’s in a blood-soaked superhero joint!) 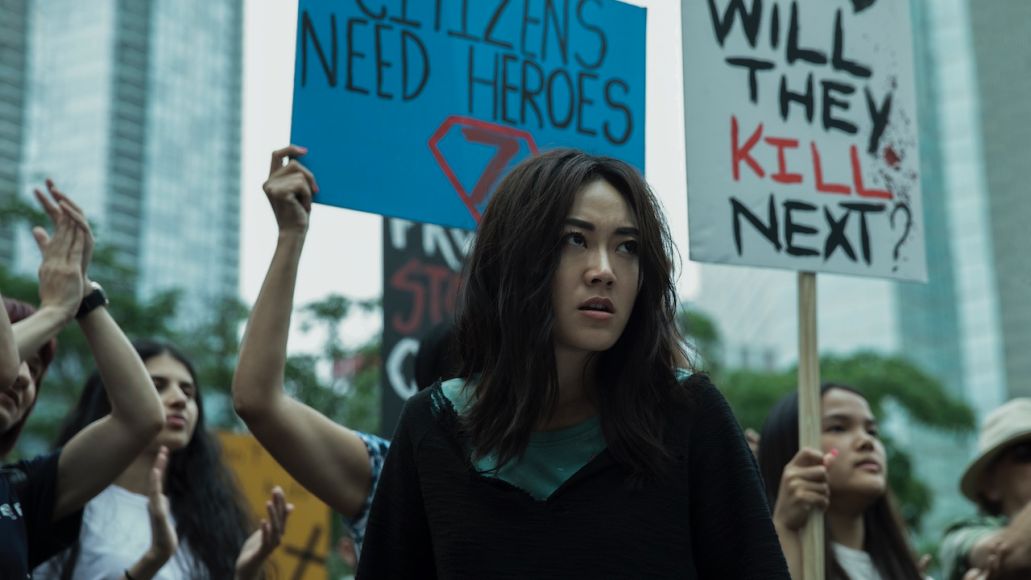 Voughts and Prayers: And then there’s the satirical core of The Boys, which takes aim at everything from the vapidity of celebrity culture to the fanboy expectations of superhero media, to modern-day political polarization. Some of it works tremendously well; several episodes begin with cheeky in-universe media, like Homelander’s school safety video that throws supervillains in as a scary analog for school shooters. One vignette late in the season nails the terrifying possibilities of online radicalization, showing a lonely young man pouring over right-wing media and extremist Facebook feeds until his fear of suspected “supervillains” hiding in our midst has deadly consequences.

The Boys is never shy about the targets of its critique: the 1:1 comparisons to the pandering ‘girls get it done’ moment from Avengers: Endgame and cynical references to diversity hires in the Seven can grate in their obviousness. Plus, the gleeful anarchy of the show’s approach doesn’t work with everything. Take one episode’s flashback to a memory of a young Black man getting killed by a racist superhero during a traffic stop; the imagery evokes Philando Castile, Sandra Bland, and the scores of other unarmed Black people killed by law enforcement. But as the camera lingers on the intricate gore effects of a Black man’s head half-smashed in by a supe, it clashes with the severity of the scene. The rest of the show wants us to guffaw at the extremity of the violence we’re seeing; to parlay the same thing for shock value here feels tone-deaf.

The Verdict: There’s still too much going on in The Boys to keep it all straight in your head — I haven’t mentioned half of the main characters in this season in this review — and the show’s obsession with exploding heads and severed limbs grows numbing after a while. But Season 2 shows a greater willingness to sit down with its characters, and its presumably bigger budget makes for more assured effects and a slightly wider scope than before. There’s plenty of fun to be had in the chunky crimson mess; that is, if you have the eight hours to spare to look for it.

Where’s It Playing? Crack open a cold one with The Boys on September 4th via Amazon Prime Video.