The Pitch: Legendary purveyors of late night schlock, Troma Entertainment put their own spin on William Shakespeare’s The Tempest by swapping out a tropical storm for gallons of whale feces and a deserted island for New Jersey. All of this in an attempt to skewer online culture and big pharma’s conquering of America with gross-out gags and a politically incorrect sensibility.

What Is Past Is Prologue: That iconic Troma logo — you know, the one with the New York City skyline set against a blood red sky with spotlights in the air — is like a warm blanket for genre cinema lovers who were weaned by Gilbert Gottfried and Rhonda Sheer on USA’s Up All Night. The memorable, simplistic fan fare conjures up an instant wave of nostalgia, but nostalgia is a powerful drug that can cloud your vision, even in hindsight. Outside of a few notable classics—Mother’s Day, The Toxic Avenger, Class Of Nuke ‘Em High—the films that Troma distributed were overwhelmingly more memorable than the ones they produced in house.

Lloyd Kaufman, who got his start on iconic New York films like Joe and Saturday Night Fever, will not be remembered as a writer or director, but as mogul. Kaufman is indeed a visionary who brought drive-in fare like Bloodsucking Freaks and Don Dohler’s regional favorite Night Beast to wider genre audiences around the world—and even some acclaim. He gave South Park’s Matt Stone and Trey Parker their first taste of fame when he picked up Cannibal The Musical and gave James Gunn a shot in the director’s chair with Tromeo & Juliet. Kaufman sure knows how to pick ‘em, But as a filmmaker, he doesn’t seem to give much thought to style or aesthetics. He simply shoots, crosses his fingers, and hopes for the best.

Shakespeare’s Shitstorm feels like it may have been inspired by Troma proteges, Parker and Stone, offering up a South Park-esque, libertarian, smartest-guy-in-the-room voice wrapped up in a typical “stoopid” Troma package. The film seeks to skewer the puritanical left and the even-more puritanical right, attacking social justice warrior culture, the 1%, and big pharma who have deeply affected and infected American life. Opening up on a cruise ship, a mega rich pharmaceutical company—Avon Bard—is celebrating the release of their newest drug, Safespacia which is being marketed towards young people as a way to protect themselves from differing opinions and anything that might trigger them.

William Shakespeare himself (Frazer Brown) breaks their fourth wall to explain that Avon Bard has teamed up with two of the most influential social justice warriors who, thanks to their Twitter manipulation, have made the corporation quite popular amongst young people. The cruise is interrupted by the titular shitstorm, when a pod of whales—drugged with laxative by Prospero (Kaufman)—floods the ship with fecal matter, and, in turn, shipwrecks the passengers on the shore of Tromaville, New Jersey. Prospero resides in Tromaville with his blind daughter Miranda (Kate McGarrigle), and has a score to settle with the head of Avon Bard, Big Al (Abraham Sparrow), whose son Ferdinand (Erin Patrick Miller) falls for Miranda, complicating things even further.

Nothing the ol’ Billy Shakes digs more than star-crossed lovers. 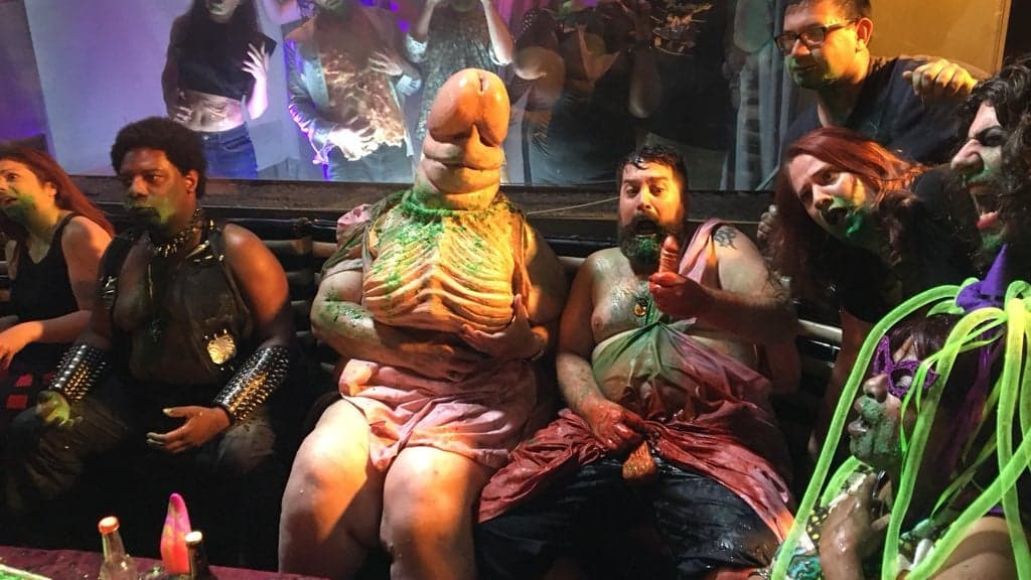 Oh, Had I But Followed The Arts: There is certainly no shortage of non-traditional adaptations of Shakespeare adaptations in genre cinema (Forbidden Planet loosely adapted The Tempest in 1956), but Shitstorm does it with all the subtlety of a “cool” high school English teacher who wants to rap with you about the Bard. In a soliloquy of sorts, Shakespeare confronts a room of critics explaining that his stories were always full of sex and fart jokes for the common man. This is undoubtedly a very Troma take on the original text, complete with scantily clad women, drugs (particularly a snortable substance called Tempest), and a murders row of freaks and weirdos.

To Thine Own Self Be True: As a director, Kaufman is never able to reach the intangible levels of empathy and adoration that John Waters displayed when shooting interesting people. Waters loved his strange cabal of odd ducks—and the squares too— but you don’t get that level of emotion from Kaufman’s gaze — it’s a genuine freak show to him. Only a fool would expect any kind of subtlety from a Troma production, where louder and grosser is better, but this kind of smug smarter than both sides of the aisle satire works better with a slyer touch. The heads of the corporation and the pair of social justice warriors leading the charge against them are cartoon characters, and had Kaufman and screenwriter Brandon Bassham painted these characters more realistically, the jokes would have landed harder. The social justice warriors particularly are the uninformed baby boomer’s concept of what a millennial is, and that lack of truth hurts the joke. Shakespeare’s Shitstorm thinks it’s more transgressive than it actually is. 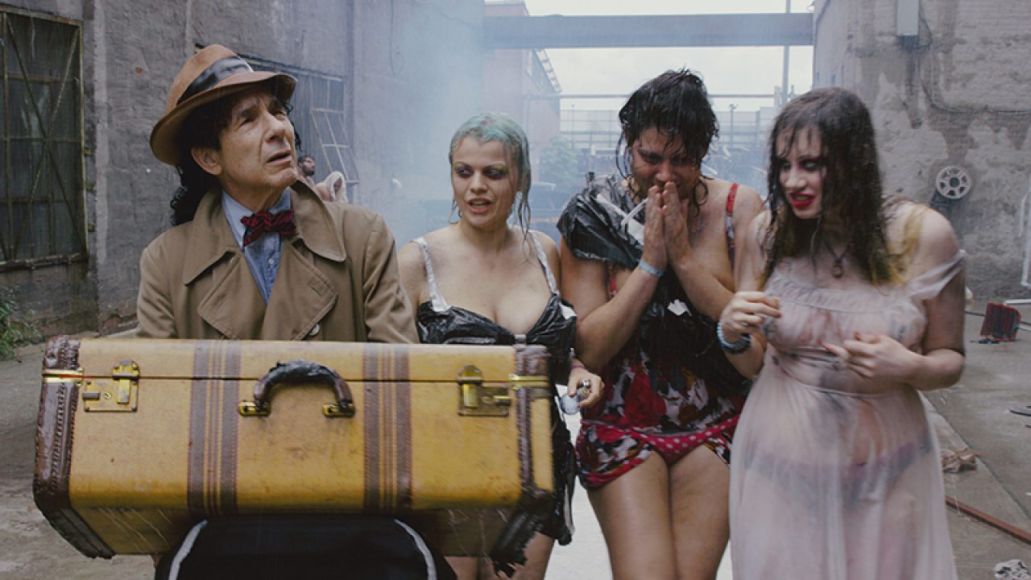 With Mirth And Laughter, Let Old Wrinkles Come: The film is not completely devoid of laughs. There is a memorable sight gag calling back to the elevator sequence in The Shining. Both McGarrigle and the wonderfully unhinged Amanda Flowers as the wheelchair bound, crack-addicted Ariel offer up go-for-broke comedic turns, singing songs about sex and a crack pipe, respectively. And, despite my feelings about his work behind the camera, Kaufman turns in a memorable performance as Prospero.

Shakespeare’s Shitstorm is Kaufman’s manifesto for the age of outrage. The man has been peddling offensive junk food cinema for over four decades that occasionally transcended the video store’s bargain bin into an unforgettable piece of pop culture. Prospero is Kaufman’s surrogate, speaking with the same carny huckster bravado that has made “Uncle Lloyd” a favorite of genre cinema fans for decades as his character rails loudly and occasionally sharply against the new era of political correctness. It’s a terrific performance but one has to ask themselves, “Is Kaufman simply playing himself or has his whole persona been a show for 40 years?” Either way, Kaufman is the centerpiece of the film, railing against cancel culture, the opioid crisis, confusion about changing times, and anything else that is perturbing the 74-year-old filmmaker and low-budget icon.

The Verdict: Shakespeare’s Shitstorm is Kaufman and Bassham attempting a wry parody in the vein of Mike Judge’s Idiocracy. But like most things Troma, a cheap budget, obvious jokes, and a laissez-faire attitude towards style and aesthetics prevents the film from transcending its trashy roots to high art. The left and the right have deep issues within each movement that deserve to get taken to task, but Shitstorm opts to go for low hanging fruit, attacking it with obvious, sophomoric humor. Having said that, there are some good chuckles that will appeal to the teenager in all of us, and the climax offers up some on-brand Troma gross-out imagery. In the end, Shakespeare’s Shitstorm aims to scorch the new politically correct movement, and it might even offend someone — that is, if anyone was capable of taking the film seriously.