The Pitch: Laura (Rashida Jones) is in crisis. From the outside, it might not seem so: She’s a published author with another book deal on lock, she’s got a handsome husband named Dean (Marlon Wayans) and two beautiful girls, and they live in the kind of well-furnished Manhattan apartment you only see in sitcoms.

But Dean’s started to spend more time outside of the home, ostensibly to work on his social media startup with his tall, gorgeous colleague Fiona (Iron Fist‘s Jessica Henwick), and his excuses for his absence have grown increasingly flimsy. Hence, the crisis: She can’t concentrate on her book, she’s increasingly aloof to her school pickup mom-partner Vanessa (Jenny Slate), and she can’t quite get Dean to concentrate on being an active dad where it counts.

Enter Felix (Bill Murray), Laura’s wealthy lothario father, who swoops in to visit from his latest trip to Paris. She confesses her suspicions to him, and being the effortless chauvinist he is, affirms them. Soon enough, he’s wrapped her in a frivolous investigation to find out the truth about Dean’s potential infidelity, and in so doing, they’ll reckon with their own complicated relationship. 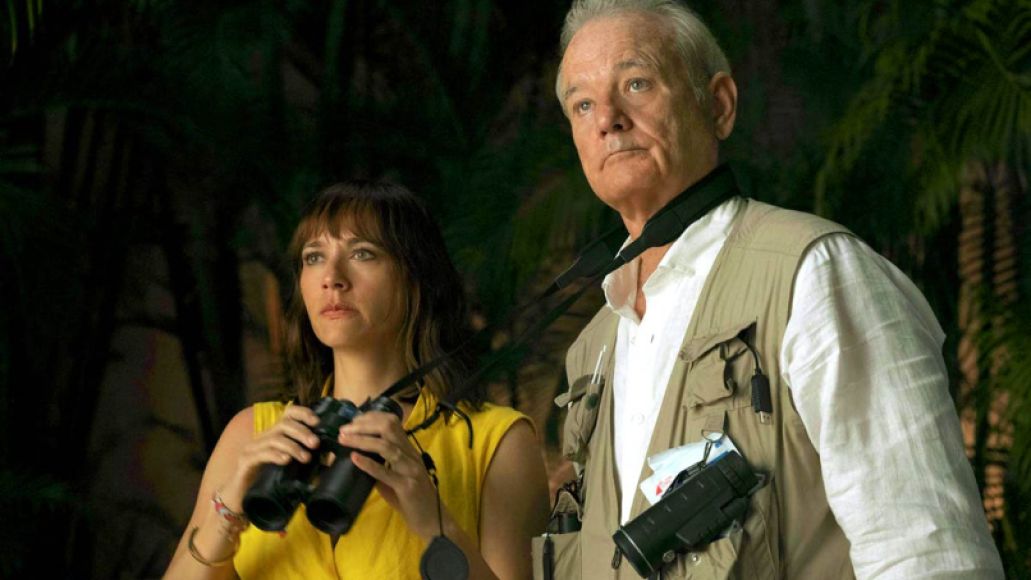 I’m Thinking of Bartending Things: For all her critical acclaim and decades of filmmaking experience on her own, Sofia Coppola has always, inevitably, had to climb out from under the shadow of her famous father, Francis Ford Coppola. In a lot of ways, On the Rocks is not-so-secretly about this dynamic — Laura the pragmatic daughter to an older, well-liked, influential man who allegedly carried his own problems with philandering and emotional distance. It’s territory she’s tread before, even with Murray himself in Lost in Translation; Coppola is deeply interested in finding ways to love and accept the father figures around her, even when they don’t realize how much they’re disappointing you.

It’s Suntory Time: It helps, of course, that Coppola’s reunited with Murray, Coppola being maybe the only director to recognize the man’s potential for high-class cool buried beneath those weary Midwestern eyes. The image of Bill Murray, scotch in hand, well-tailored and flirtatious with every woman that walks his way, is an indelible one. If On the Rocks is an homage to Fellini, Murray is her Marcello Mastroianni — a man who disguises his own emotional immaturity behind bon vivant aesthetics and pretentious monologues about man’s biological imperatives toward sex. 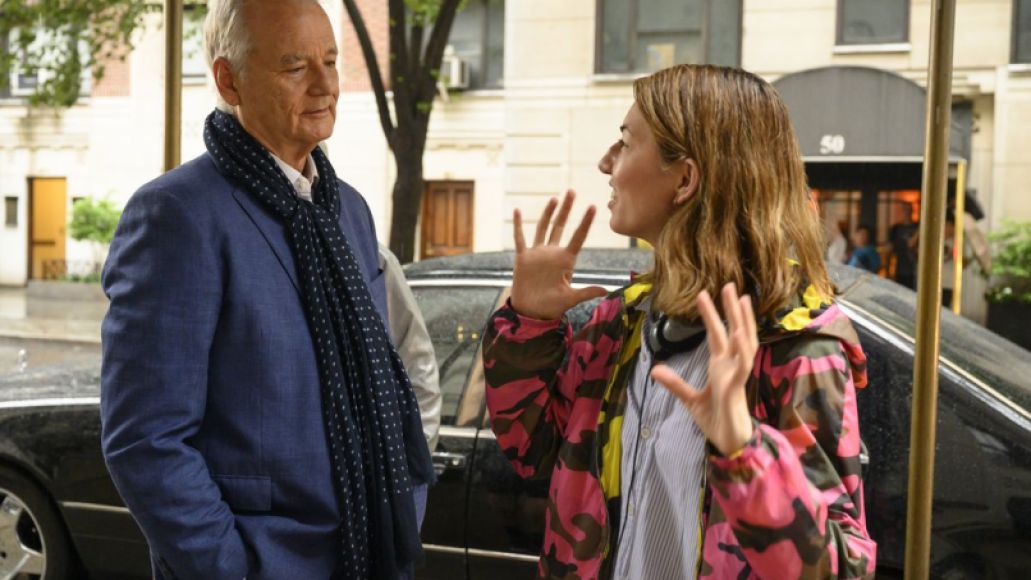 For all of On the Rocks‘ too-short 90 minutes, Murray’s on a pure charm offensive, and it’s a wonder to watch him work. At one point, halfway through the film, he and Laura get pulled over by the cops while tailing Dean. He recognizes the cop as the boy of an old friend of his, and by the end of their exchange, he’s charmed the man enough to help him give his cherry-red Italian jalopy a jump. Such is the magnitude of Murray’s star power, and as Laura’s unimpressed look tells us, a dynamic that can be frustrating if you’re always living in that enormous shadow.

Like Another Character: Nearly everything we watch nowadays is colored through the lens of COVID — a million productions about people living in big cities packed with crowds, which feels nearly impossible anymore — and On the Rocks‘ loving treatment of New York City is no exception. Beguiled cinematographer Philippe Le Sourd shoots New York with moodily-lit charm and frankness; it’s unassuming and un-flashy work, but it captures the hustle and bustle of the city, from its scaffolding-covered neighborhoods to the mighty buildings and fancy bars of its ritzier locales. 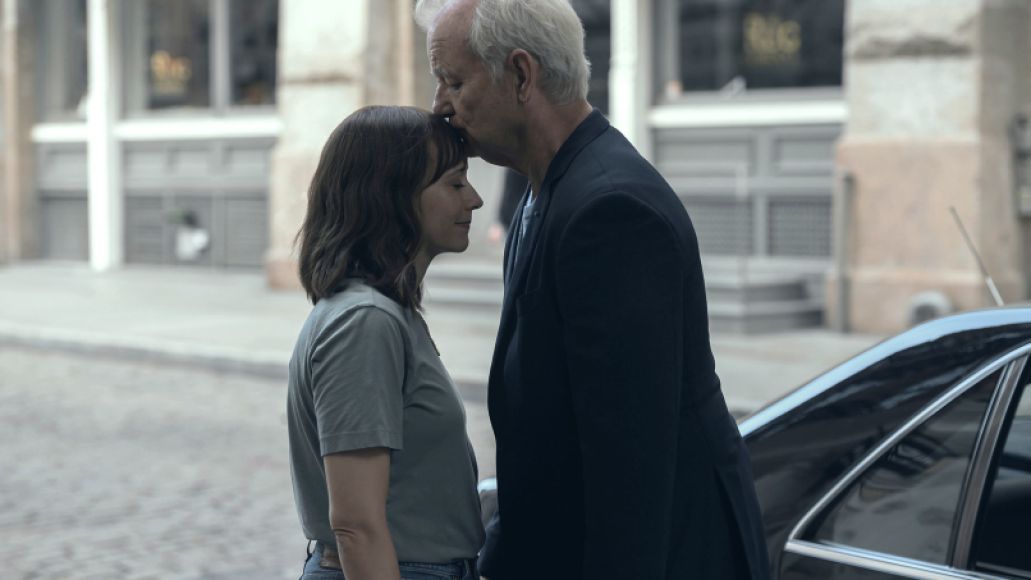 With a Twist: While much of On the Rocks uses the question of Dean’s infidelity as an excuse to get Murray and Jones to pal around New York for an hour-plus, it does eventually become time to address that plot thread, complete with a last-minute trip to a sun-dappled Mexican resort and a lot of feelings coming to a head. Some may resent this ending for being too abrupt, or for taking the wind out of the film’s sails. But I’ve come around to it — the film, after all, isn’t about Laura and Dean, but about Laura and Felix, and the way his jet-setter life, and the worldview he’s cultivated in order to live it, have rubbed off on his daughter.

The Verdict: “You can’t be deaf to women’s voices!” Laura shouts at her father late in On the Rocks. It’s a line that reflects the bittersweetness at the film’s heart: at the heart of patriarchy is the notion that women exist for men’s purposes, whether for sex, property, or adoration. Coppola sends us on a light, frothy father/daughter adventure, to be sure, but one suffused with the tiny tragedies of misogyny, and the excuses men make for their selfish behavior. Even the sweetest dishes need a little salt to bring out its complexities, and On the Rocks is no exception.

Where’s It Playing? After its NYFF premiere, On the Rocks opens theatrically on October 2nd, then goes to Apple TV+ on October 23rd.