The Pitch: Set against the mud-covered backdrop of southern Ohio and West Virginia in the ’50s and ’60s, we see the ways that faith, violence, and lost innocence play out against an interconnecting web of characters. There’s Willard Russell (Bill Skarsgård), whose experiences in WWII haunt him even as he tries to make a life back home with a sweet waitress (Haley Bennett). There’s also Carl (Jason Clarke) and Sandy (Riley Keough), who get their kicks picking up hitchhikers, photographing them, then slaughtering them. There’s Sandy’s brother, Lee (Sebastian Stan), a portly, corrupt sheriff constantly gunning for re-election and turning a blind eye to his sister’s wrongdoing.

Caught in the middle of it all is Alvin (Tom Holland), Willard’s orphaned son, trying to navigate his way through the vagaries and sin of the world he was born into — and whose capacity for violence is tested when a sleazy new preacher (Robert Pattinson) comes to town and starts making moves on his adoptive sister (Eliza Scanlen). Blood is shed, lives are changed, and characters’ lives intersect in the ways these kinds of films do.

Flannery Will Get You Nowhere: By all accounts, The Devil All the Time should succeed on pedigree alone. Director Antonio Campos is generally well-regarded for films like Simon Killer and the excellent Christine, textured tales of psychological decay and moral breakdown — surely the perfect candidate to adapt a violent piece of Southern-fried Gothic prose like Donald Ray Pollock’s acclaimed 2011 novel. The cast is stuffed with actors who thread the needle between indie darling and franchise superstar (the film shows you both Spider-Man and spiders on a man). And yet, there’s something missing in the connective tissue here, leaving Devil feeling like less than the sum of its parts.

It doesn’t help that the adaptation doesn’t ever quite escape the familiarity of its material, a grim, dour exercise in shakily intertwined stories set against the violent backdrop of America’s post-War rural wilderness. It’s a blend of Flannery O’Conner, Cormac McCarthy, and William Faulkner, each major throughline borrowing a stylistic flourish from each without coalescing into something unique or particularly meaningful. We’ve all seen a million stories about violence begetting violence, the way religion can hide behind a cloak of righteousness, how women and men alike suffer under the yoke of toxic masculinity, yadda yadda yadda. It’s decently crafted, but there’s nothing new here. 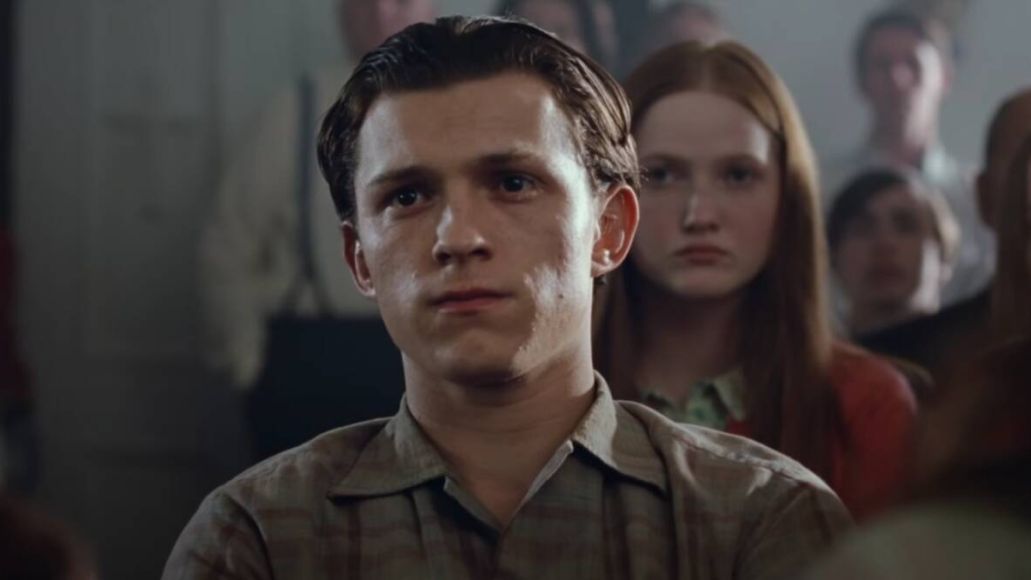 The Devil All the Time (Netflix)

Moonshine Magnolia: When Devil All the Time escapes the doldrums of its languid yet overstuffed story, it’s a credit to the cast, who are all pulling their weight, even when they feel like they’re all in their own separate films. Holland is all tightly coiled intensity and rage, bringing his Peter Parker physicality to moments of surprising, incredible violence. Clarke and Keough play the true-crime pulp fiction murder couple to a tee, finding some neat moments of deceit in their sly underplaying. Contrast that, though, with Pattinson, who’s Making Bold, Big Choices with his nasal drawl and agonizingly slow delivery, opting for irony over the constipated sincerity of the rest of the cast. (The film is populated with Brits and Aussies trying for Southern accents, so have fun trying to pin down where everyone thinks they’re from, especially Pattinson.)

Predictably for a Southern Gothic crime novel written by an old, white guy, the women of the film are sorely underserved, Madonnas and whores all. Bennett, Scanlen, and Mia Wasikowska (as a deeply devout young woman whose blind faith leads her into the lion’s den) are underwritten cannon fodder for the violent men that Pollock and Campos (who co-wrote the script with brother Paulo) would rather focus on. As Scanlen’s grandmother, Kristin Griffith is the only woman given room for her own sense of pathos, and she’s one of the film’s secret weapons. 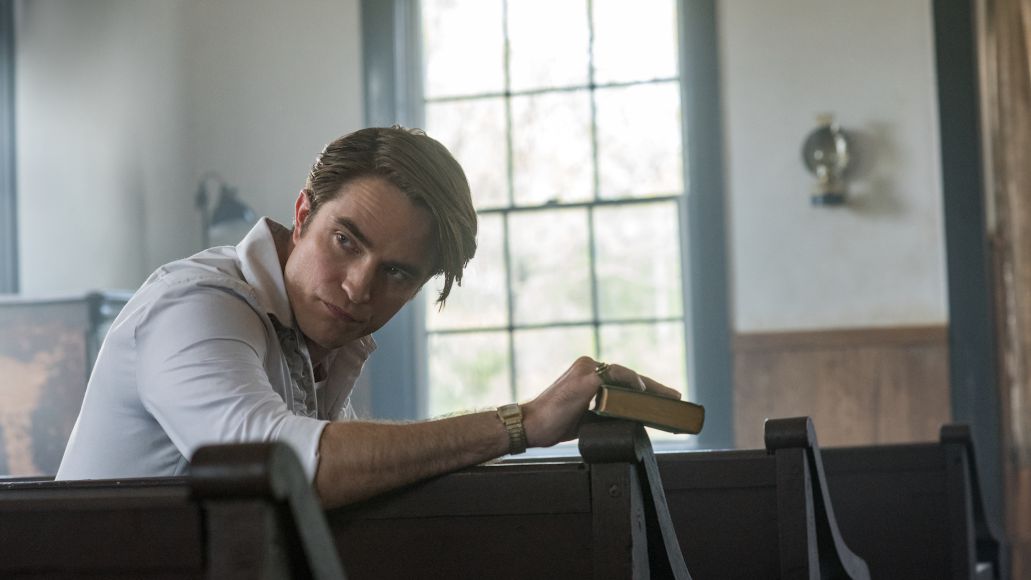 The Devil All the Time (Glen Wilson/Netflix)

Some People Were Born Just So They Could Be Buried: Still, don’t get too attached to many of these characters, as the auspices of the genre Campos is playing in mean that just about everybody sees some kind of chicken come home to roost. Unlike stronger stories of disparate people changing each other’s lives by their mere meeting, however, Campos leans too hard on contrivance and the achingly literal narration from Pollock to do the heavy lifting. It’s a big, bloody canvas he weaves, painted too haphazardly to find the subtlety among the brushstrokes. Ostensibly, Pollock and Campos mean to show us the factors that can drive a man to murder and whether there’s any way back; but even at two-plus hours, few of the characters get the space needed to articulate those points with grace.

Campos’ biggest mistake is over-literalizing the material, adapting the broad strokes of the story without putting his own spin on it. In fact, what might be a novel (heh) choice in more fortunate hands — allowing Pollock himself to pepper the proceedings with bits of his own lyrical prose, his folksy drawl making you feel like you’re listening to an especially bloody episode of A Prairie Home Companion — feels intrusive more than illuminating. And it just hammers home the difficulty of adapting a sprawling crime novel like this; when the best thing a novel has is its prose, you have to be very careful how you translate that to the screen. 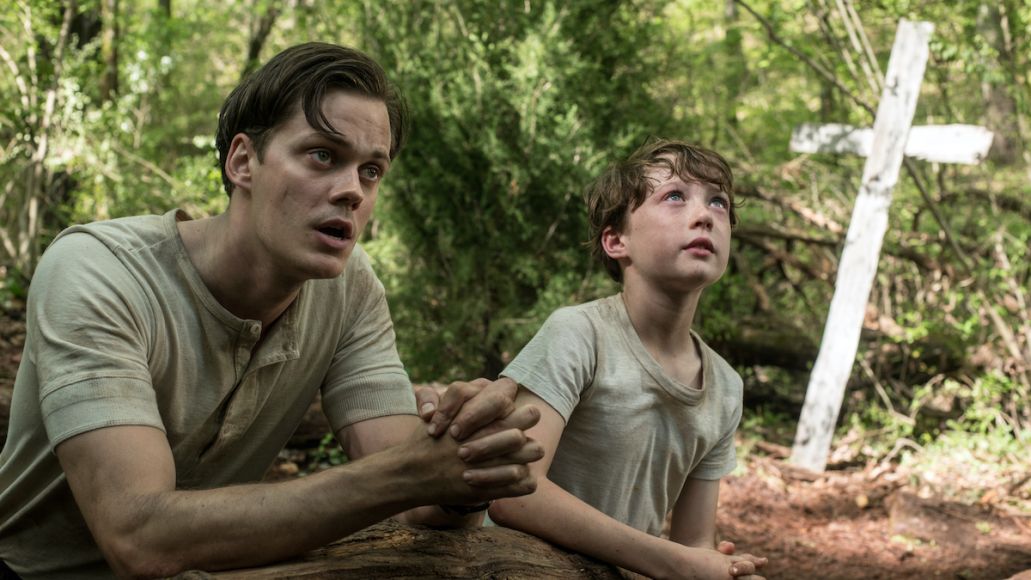 The Devil All the Time (Glen Wilson/Netflix)

The Verdict: It’s a shame to see a movie this ambitious and well-cast turn out so wobbly, but The Devil All the Time inevitably sinks under the weight of its self-importance. It wants to be a Big Movie about the trap of Pentecostal dogma and toxic masculinity, and the difficulty in escaping the cycles of violence baked into American culture. But much like Alvin at two crucial points in his life, Campos gets lost in the woods here, buckling under the disparate tones of its cast and Pollock’s overbearing presence on the material. Whenever he pipes in with prophetic homilies about the inner nature of his characters, it can’t help feeling like the novelist trying to wrest back control of his creation from the man adapting it. It’s a metatextual tug of war that Campos, unfortunately, loses.

Where’s It Playing? The Devil All the Time coats the Buckeye State with blood and sin on Netflix September 18th.

Netflix's The Devil All the Time Is a Messy Southern Gothic Stew: Review