The Pitch: In 1968, a coalition of anti-Vietnam War and counterculture protestors took to the streets in Chicago to protest outside the Democratic National Convention, rallying to end the Vietnam War and bring our boys back home. Predictably, the police retaliated with overwhelming force, greeting them with beatings, tear gas, and scores of arrests.

With the whole world watching the outcome, the trial would become more than a fight for these men’s innocence — it would be a fight for the soul of America’s institutions and right to free speech. 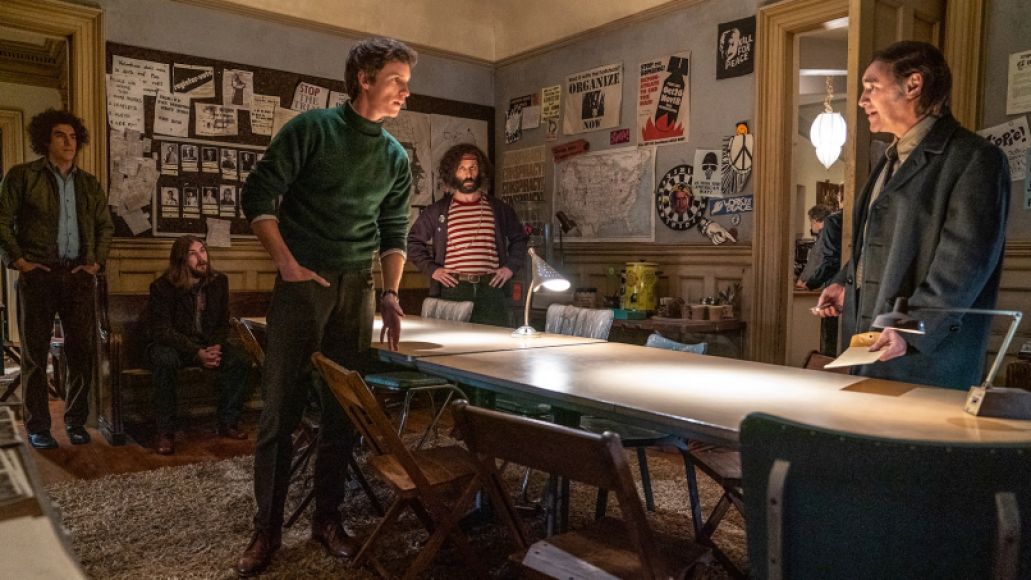 A Few Good Men: Aaron Sorkin’s gargantuan film project on the Chicago 7 has been in the works since 2007, starting out as a Spielberg-directed joint with Will Smith as Bobby Seale and Heath Ledger as Tom Hayden; that it’s taken till 2020 to come to fruition feels sickeningly apropos for our current political moment. In the wake of the killings of George Floyd, Breonna Taylor, and so many others, we’ve seen full well the miscarriage of justice that’s come from seeing very little punishment come to the law enforcement officers responsible.

It’s hard not to watch this film and not see how neatly it fits into the conversations we’re having about police brutality, the suffocating power of the state to silence dissent, and the ways even the most ardent political idealism is cynically dismissed as soon as someone from that camp does even the smallest thing wrong.

Sorkin, ever the holder of the poison pen and lover of strident monologues about What Makes America Great, is a great fit for the material, at least in terms of the screenplay. From A Few Good Men, we know he knows how to handle a courtroom drama, and it’s on the stand that his characters get the most incredible moments of quintessentially Sorkin wordplay (“He has a dream? Well, now he has fuckin’ bullet in his head”). If you’ve come here for witty bon mots and overlapping dialogue, you’re in the right place. 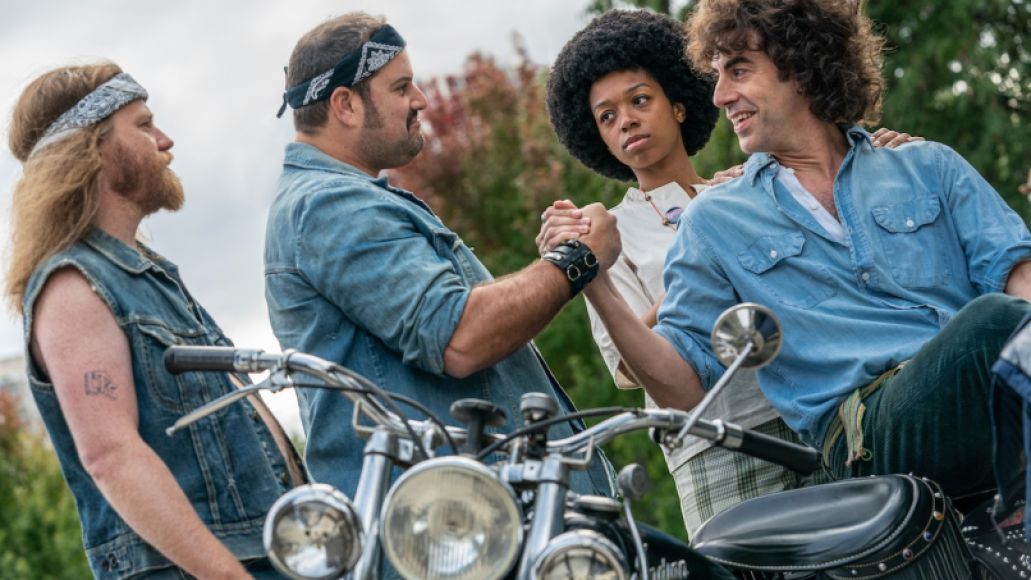 The Academy Awards of Protests: Also, the real event was host to a score of big, intriguing personalities who make fitting mouthpieces for Sorkin’s gift of gab: Cohen’s Hoffman is an irreverent shit-stirrer who doesn’t suffer fools gladly (a Classic Sorkin Archetype if ever there was one), with Strong’s Rubin his dry, militant counterpart. Frank Langella’s Judge Julius Hoffman effortlessly toes the line between doddering and menacing, his forgetfulness giving way to bursts of outrage once someone dares disrespect his courtroom.

There’s a barely-restrained chaos in the courtroom that Sorkin effortlessly handles, from Judge Hoffman’s frequent interruptions and blatantly prejudicial behaviors to defense attorney William Kunstler (Mark Rylance) huffing relatably to the unfairness on display. Even Joseph Gordon-Levitt’s Richard Schultz, the prosecutor of the case, is painted as an avatar of Sorkinesque competence, viewing the case dispassionately but stepping up when clear, blatant bounds are violated. 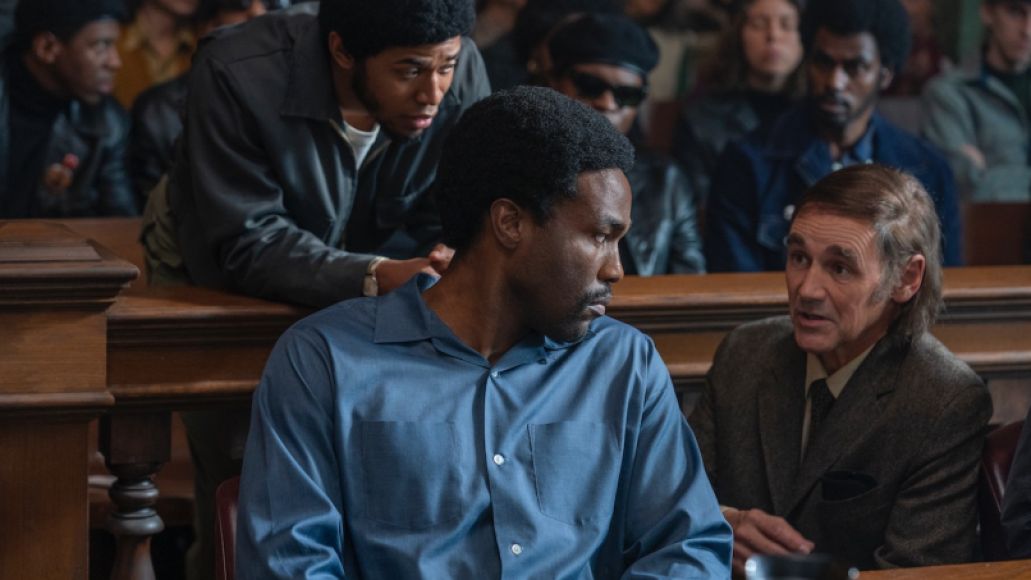 But even outside the courtroom, Sorkin deliciously explores the infighting of the Seven themselves and makes clear the objective injustice of Bobby Seale’s treatment. Redmayne, sporting a hushed American accent that sounds like he’s impersonating Topher Grace, imbues Hayden with a quiet resolve that belies respect for authority and due process that clashes with Hoffman and Rubin’s fuck-the-man militancy. Conversations flow about how much to respect the “pigs”, illustrating the frustrating difficulty the left has towards coalition-building, a laughable notion even in an era where the concept of “Antifa” has been put on a list of domestic terrorist groups.

Of the cast, it’s Abdul-Mateen II who gets the biggest, most striking presence, He fills Seale with a righteous fury that feels downright cathartic; this unique status among the defendants (he’s not really with them, and hasn’t even been granted his constitutional right to counsel) makes him a welcome fly in the ointment to the smug rhetorical flourishes of white men. His eventual, literal gagging — a real, monstrous thing that happened in the actual trial — is the most potent visual metaphor for the struggles of Black America to be heard at all. 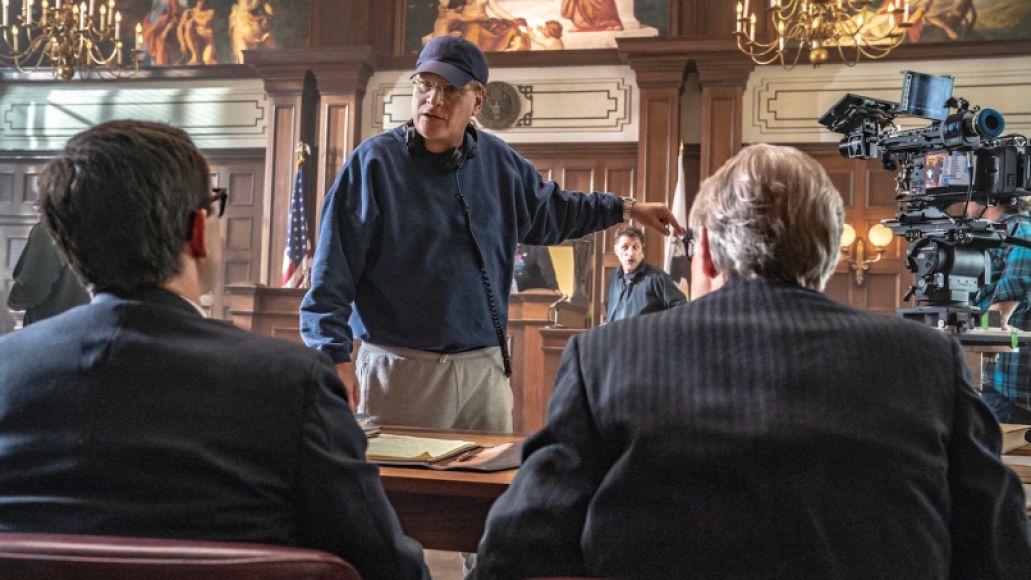 Ye Doth Protest Too Much: But for all the fist-pumping Big Moments and its political heart in the right place, there are bits of Chicago 7 that feel stiff and perfunctory, Sorkin filtering such messy historical events through a more easily-digestible format. With Sorkin in the director’s chair as well (a move that crippled his previous film, Molly’s Game), his lows show up almost as often as his highs. The script, while clever and filled with sterling dialogue, can be a bit overwritten at times, especially in the moments where Sorkin chooses to intercut a cross-examination, whether on the stand or off, with the frenzied actions being described at the protests.

It’s a neat trick the first few times, but the scenes labor on long after we’ve gotten the point, building up to Big Rousing Climaxes that get repetitive after a while. Sorkin’s been rightly lauded for his writing in the past, but with that celebration can come ego — suddenly, every scene must have a grand, strident point to make, or a particularly cutting remark to close it out. Daniel Pemberton’s score doesn’t help either, laying on the Historical Portent with its sweeping intensity from minute one and never really letting up from there. Chicago 7 feels like completely unchained Sorkin, for better or worse.

What’s Streaming on Netflix in October 2020

The Verdict:  Despite Sorkin’s significant shortcomings as a director, The Trial of the Chicago 7 hums along mightily on the strength of its god-tier ensemble and whip-smart script. There’s hardly a false note in the cast, all of them capably handling Sorkin’s overlapping, erudite dialogue with aplomb, and many of the big moments land with a splash. It’s just frustrating to imagine how much better this could have been without Sorkin in the director’s chair, who might’ve eased him toward killing his darlings and bringing some much-needed filmmaking verve to the proceedings.

But even in that context, the film still hums like a mighty engine churning toward justice. In a 2020 where the sitting president has openly confessed on live TV to trying to rig the election in his favor, and the National Guard is (still) called in to harm American citizens who want nothing more than the systems put in place to protect them to actually do that job, the efficacy and the necessity of protest is as immediate as it was back then. It’s filtered through an Oscar-friendly lens here, but even a polished, somewhat sterile call for justice is more than welcome right now.

Where’s It Playing? The Trial of the Chicago 7 puts America on the stand on Netflix October 16th.