During a pandemic that’s drastically altered the day-to-day operations of the music industry, Lamb of God have forged ahead. The metal veterans released their new self-titled studio album in June, despite not being able to tour in support of the LP. And the decision brought much-needed joy to metal fans everywhere, as the album ranks among Lamb of God’s finest works.

Upon completing the album, the band was then commissioned to write a song for Bill & Ted Face the Music. The film’s music supervisor handpicked the Lamb of God, who delivered “The Death of Us”, a crushing anthem to friendship that cemented 2020 as a veritably productive year artistically for the band. With one full-length and a major soundtrack appearance in the bag, fingers are crossed that Lamb of God will be able to embark on their rescheduled co-headlining tour with Megadeth in 2021.

Not satisfied with merely unleashing a stellar new album, Lamb of God have found other new ways to indulge their fans during the pandemic. They recently released a new small batch coffee, “Momento Mori”, the product of a collaboration with Nightflyer Roastworks, owned by Between the Buried and Me guitarist Paul Waggoner. The versatile, world-class coffee showcases Lamb of God guitarist Willie Adler’s long-time passion for roasting and brewing coffee, consummating a shared obsession with Waggoner. Lamb of God have also announced a pair of livestreams where they will perform their entire 2020 self-titled album on September 18th and 2004’s Ashes of the Wake in full on September 25th.

Heavy Consequence caught up with Willie Adler to discuss the origins of “Momento Mori” coffee, his favorite coffee shops, contributing to Bill & Ted, and the upcoming livestreams.

On the origins of Lamb of God’s “Memento Mori” coffee

Paul Waggoner and I had a long-standing relationship based around coffee. We both came into our own coffee game around the same time. I remember this particular tour we did a while back when he was standing in for Mark [Morton]. We ended up in all these crazy places, South Africa being one of them. We would go around and find the coolest little coffee houses that we could and try all the different coffees and pick up different beans. By the end of that tour, we were talking about roasting our own beans. At that point, it was just a farfetched idea that neither of us believed we would end up pursuing. But we did, and I ended up roasting coffee at my own house with improvised popcorn machines. He ended up buying an actual designated coffee roasting machine, and he took it all the way and founded Nightflyer, which I was super stoked about.

So when the idea came about that we might dabble in the coffee game, I was like, “Yeah, leave it to me and Paul and we’ll make something awesome.”

[I started roasting] about six years ago. I found these old-school popcorn machines would work really well for small batch coffee roasting. I ended up going on eBay and spending f**king stupid amounts of money on these antique popcorn machines that I was just going to ruin by roasting coffee in them. I ended up having all of these machines, because it was just never enough coffee. I was just rolling through coffee. So I needed to have like six machines going at once, and I’m dancing around these machines like I’m playing a xylophone making sure that none of this shit is burning. I’m telling Paul what’s going on and he’s just laughing hysterically at me. He’s like, “Dude, why don’t you just buy — for like a quarter of the price that you’ve spent on these popcorn machines — you could just buy a roaster and do a whole pound of coffee.” I’m was like, “Nah dude, I want to do it this way.”

I don’t know why I was so obstinate in wanting to do it in a really rudimentary way, but that’s where my head was at. I ended up moving away from the popcorn machines and ended up doing a more improvised deal with a construction heat gun that dudes use to f**king tear paint off walls — they get like 1,200 degrees. I’m wearing mechanic’s gloves and stirring over this big cauldron so I could do a pound at a time. I’m telling Paul, “Hey, check me out now!” He’s like, “Dude you’re going to burn your arm off!”

I haven’t been roasting a lot as of recent. I should actually get back into it now that I have some more time. [The roasts] turned out f**king great! I loved it. I sent some to Paul, I sent some to Randy [Blythe], and Randy was super pumped on them, Paul was f**king stoked! I thought they were great, but I may be a little biased. 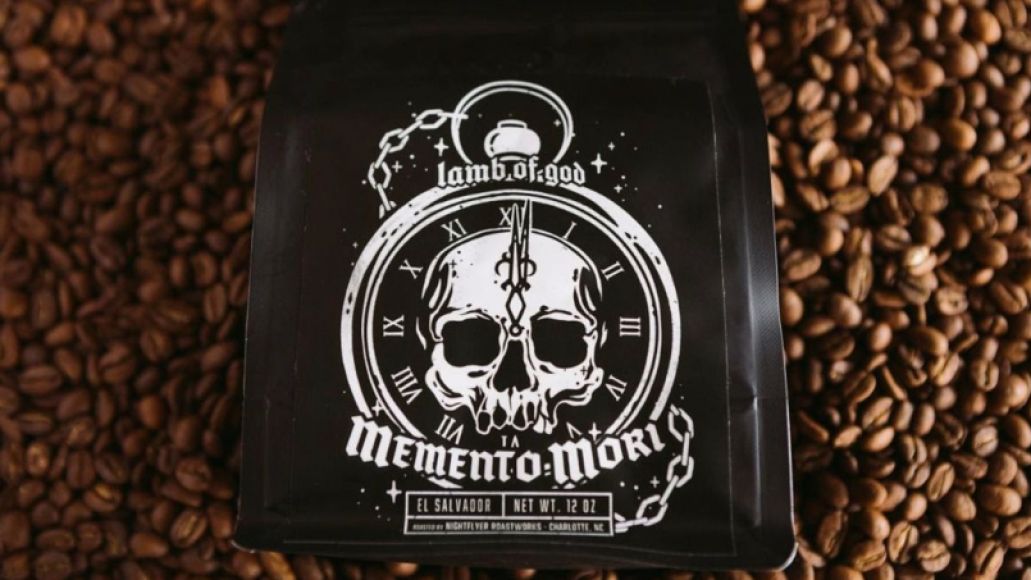 On the “Memento Mori” blend and tasting notes

Overall, it’s a real versatile coffee. It’s kind of caramel-y and it has a bit of blackberry to it. It’s a little bit brown sugar — you have to roast a little bit darker to pull of the chocolates and cocoas. As far as this coffee, we really wanted something middle-of-the-road — something universal that would behave well as an espresso, could work in a drip, french press, pour over. It’s not necessarily designed for any one application of making coffee.

On his favorite coffee shops in the world

One of my favorite spots of all-time was from that first tour we did when Paul was in tow and we were in South Africa. I think it was Cape Town — this coffee shop name Truth. It had this steampunk theme, so everybody working there was wearing these huge metal goggles and these big leather aprons. They had all these crazy-looking conveyor pipes going everywhere. Super cool place, and the coffee was unbelievable. I remember both Paul and I buying at least like three pounds each to take home. That stands out as one of my favorite spots in the world to get coffee.

It was 100-percent written for the movie. The [self-titled] album was tied up; we were done with everything. Then all of a sudden we got word that the music supervisor for the new Bill & Ted movie wanted us specifically to write a song for the movie. They even gave us parameters, which was a little weird. They sent us audio from a scene — they couldn’t send us the scene because it was too early — this was months and months ago. They sent us audio clips that they wanted us to base the song around. At the time, Randy and I were spending a lot of time together, so we just knocked it out. And then Mark jumped in, and we got it done. It was weird, but it came together really quick and I remember the night that we sent it over to the music supervisor. We were waiting around that evening and got word back from management that they f**king loved it.

It’s going to be great to get back into a venue type scenario and be with the dudes. So that aspect, I’m really looking forward to. As far as the amount of material and the amount of work that’s going to go into this — whew! Some of these songs I probably haven’t listened to in 16 years, let alone play them. But I’m really looking forward to it, and when the idea came up, it was obvious that Ashes was going to be the record we were going to do, along with the new record. I’m not sure what to expect. I’m sure we’ll fall back into what we do as a band. I’m not sure what it will be like not having the energy from a crowd. That part is probably going to be weird, I feel safe in saying.

It’s the aspect of us being together and doing what we do. Just being able to feel that again. We’ve all been stuck inside for so long, at this point, that for us to resume any kind of “normal activity” is gonna feel really good. That’s really what I’m looking forward to. The rehearsals and then the actual performances. I think we’ll be flying in some crew guys to help out. It’s gonna be good to see everybody and have that interaction again.

I still have a lot of optimism that we will get to a spot that is as close to normal as possible. I’m not sure when that’s gonna be. January is a bit ambitious. I can’t not have the hope — live music is such a large part of my life, and it’s such a huge part of, I would imagine, a lot of people’s lives. And it’s such a release and such a way to express yourself, not even as a musician, just express yourself through the whole experience. To touch back on the livestream: to not have a crowd there and not feel that energy… I’m almost a little scared of that. That whole shared experience is something that we as a people, I don’t think we can lose it. It’s a really sad thing to think about, to think that that would be gone forever. So I can’t allow myself to think about that. That might be naive, some people might call me f**king stupid for thinking that, but I won’t allow myself to go there.

Purchase the “Momento Mori” coffee directly from the band and get tickets to Lamb of God’s livestreams via their website. You can also watch our recent interview with frontman Randy Blythe below, and pick up Lamb of God’s self-titled new album here.