Neil Young has officially detailed his long-awaited Archives Vol. 2 box set. Arriving just in time for the holiday season on November 20th, the collection contains 10 discs chock-full of recordings from 1972 through 1976. According to a post on his Neil Young Archives website, twelve of these tracks have never been released in any format. There are also 50 alternate, previously unreleased versions of Young originals.

The first four discs are taken from the period of 1972 and 1973 following the release of Harvest. Disc 1, titled Everybody’s Alone, boasts the most goodies, as it features four never-before-released tracks: “Letter From ‘Nam”, “Come Along and Say You Will”, “Goodbye Christmas on the Shore”, and “Sweet Joni”. Disc 3, Tonight’s the Night, also contains a recently unearthed cover of Joni Mitchell’s “Raised on Robbery”.

Discs 5, 6, and 7 capture Young’s prolific streak in 1974. Among the highlights here are previously unreleased versions of “Bad Fog of Loneliness”, “Traces”, “Love Art Blues”, “Through My Sails”, “Pardon My Heart”, “One More Sign”, “Bad News Comes to Town”, and so much more. This grouping also includes a handful of songs that will be new to even the most diehard Young fan, such as tracks titled “Homefires”, “Frozen Man”, “Daughters”, and what appears to be his cover of “Greensleeves”.

Dume is the title of Disc 8 and it focuses on the 1975 sessions for Zuma. Here, fans will find a never-before-released song (and not a cover) called “Born to Run”,” as well as previously unheard takes on “Powderfinger”, “Ride My Llama”, and “Too Far Gone”.

Finally, 1976 is represented on both Disc 9 (Look Out for My Love) and Disc 10 (Odeon Budokan). The former includes previously unreleased song “Mediterranean” and alternate versions of “Ocean Girl”, “Midnight on the Bay”, and “Human Highway”. As Rolling Stone points out, the material found on Love Out For My Love was originally recorded around the time of an aborted Crosby Stills Nash & Young reunion album.

The latter disc, meanwhile, is a live album that chronicles Young and Crazy Horse’s tour through Asia and Europe. Specifically recorded at Tokyo’s Budokan Hall and London’s Hammersmith, it features extended versions of songs like “Down by the River”, in addition to “Too Far Gone”, “Cortez the Killer”, and “The Old Laughing Lady”.

Check out the massive tracklist for Archives Vol. 2 down below. Pre-orders will be available beginning October 16th.

In case that’s not enough archival Young content, the legendary songwriter recently announced a number of additional releases on the horizon. Return to Greendale, a live set from his 2003 tour with Crazy Horse, is due out in November. The following month will bring Way Down in the Rust Bucket, another Crazy Horse concert recorded in 1990. The Timeless Orpheum, said to be a “concert film with a lot of twists and turns, telling my story and yours, our history together”, is also nearing completion.

Last week, Young released The Times EP, which captured the “Porch Episode” of his Fireside Sessions series from back in July. And just this past weekend, Young’s seminal After the Gold Rush celebrated its 50th anniversary. 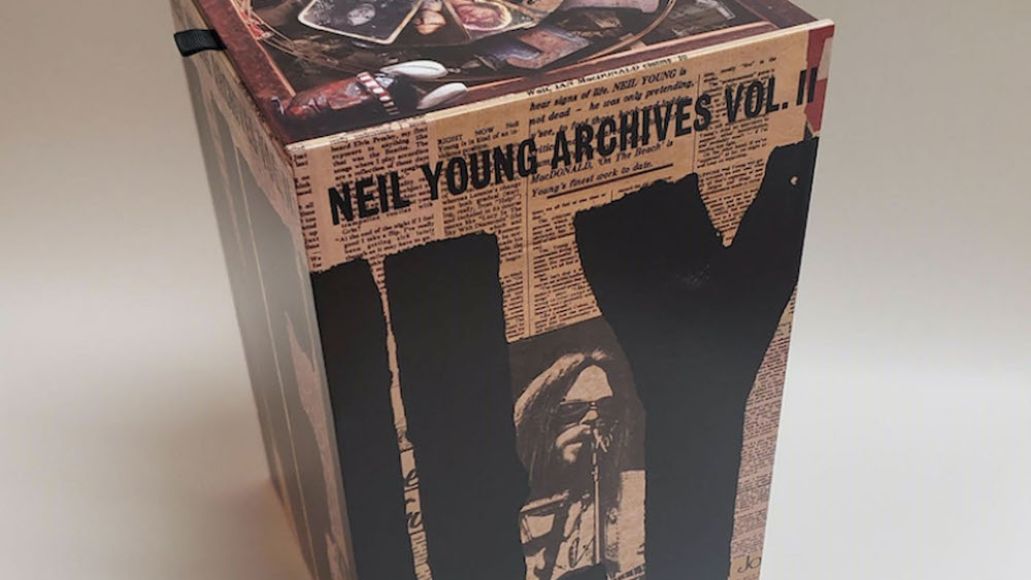