In our Track by Track feature, musicians guide listeners through each track on their latest record. Today, Sad13’s Sadie Dupuis draws us into her Haunted Painting.

A press release notes the album finds Dupuis “reconciling with a delayed processing of grief,” which feels terribly fitting for 2019. Early singles included “WTD?”, “Ghost (of a Good Time)”, and “Oops…!”. Take a listen to the whole thing below, followed by Dupuis’ Track by Track breakdown of the entire effort.

“Into the Catacombs”:
I came up with this progression pacing around a parking lot in 2014 and it was my “soundcheck riff” for years. In 2016, I started on a version of it for the first Sad13 album, about the disappeared — dissidents and journalists and children — during Argentina’s military dictatorship in the ‘70s and ‘80s. But I didn’t wind up using that version.

When I re-opened the session in 2019, things felt even more dystopian. I wanted to re-envision it with more horror-indebted layers; I was listening to Clipping and Scott Walker and felt I could go more Bernard Herrmann with the strings, less David Campbell. I scrapped 2/3 of the lyrics; I wanted the eeriness and tension to come from the instrumentation. Roberto Lange from Helado Negro is a favorite artist, and his voice added perfect texture.

“WTD?”:
“What’s the drama?” is something Tera Melos was saying to each other all the time on a tour we did in 2017. I re-interpreted that as a “What, me worry?”-type expression for a song about climate gentrification. Perpetrators of environmental devastation feel impervious to the damage they allow because they believe they can always buy someplace new.

When I made the demo, I close mic’d unamplified electric guitar strings for the solo section, which had this cool, zither-y sound. In the studio we replaced that with an electric sitar and toy piano. I kept calling it the “Sunny Came Home” section. Also, I watched the Busta Rhymes episode of Space Ghost last night and was reminded this song has a “Put Your Hands Where My Eyes Could See” reference.

“Hysterical”:
To me, this is Haunted Painting’s most straightforward pop song, so it’s weird that all the musical references were mid-late 2000s Canadian indie rock — Broken Social Scene, Clues (who I was very obsessed with and did not get their critical due!), and Metric.

I wrote it in response to a bad Todd Phillips interview about his perception that “woke culture” has worsened comedy, which I obviously don’t subscribe to. But it became more about anti-“woke” centrists in creative or left-leaning fields in general. “Brunch to break the union that erects your crystal prisms,” that’s, I don’t know, Goop, the wellness-industrial complex.

“Ghost (of a Good Time)”:
I thought this would be a 10-song album, but getting ready for the last recording session, it needed another upbeat song. I hate going out but I love club music and hyperpop, so the conceit here was a glossy party song about wanting to stay in. I couldn’t have predicted that only a few months later there wouldn’t be much of a choice!

I recorded this at Tiny Telephone in Oakland. Apart from their amazing analog synth collection, one of the reasons I worked there is the drum sound on Man Down, the Thao and the Get Down Stay Down album from 2017, which was recorded at Tiny and produced by Merrill Garbus. Contemporary acoustic drum sounds I revere are, like, that Thao album and a couple from John Congleton. The backing vocals on my “Ghost” demo sounded very Tune-Yards to me, so it’s sort of surreal and full circle that Merrill wound up singing on this one, when her work inspired me to track at Tiny Telephone.

“Oops…!”:
I’ve talked a little bit about why I wrote this song: my bandmate having a bad altercation with a violent venue employee, becoming excessively defensive on his behalf, trying to reconcile my punitive instincts in moments of harm with a genuine belief in prison and police abolition. Fun stuff.

Not too long after that incident, I tried (what I thought was) a CBD tincture to fall asleep after a red eye flight. My brain absolutely cannot handle being high, but that’s how I woke up, and I had to go to therapy so, so, so high. It felt like a six hour long session. All I could talk about was this incident and, like, wearing feminine clothing while feeling divorced from gender. A lot of songwriters say songwriting is like therapy, which is not real; therapy is therapy. But putting your mistakenly stoned therapy psychobabble into a song is… not the worst creative tool.

“Good Grief”:
This one we tracked at New Monkey, Elliott Smith’s studio, featuring his Epiphone Texan, colloquially known as the “magic guitar.” And my other favorite production thing here is we sampled the microwave as a synth sound, hence Sarah Tudzin’s “microwave” credit in addition to mixing and tracking. Zoë Brecher (who drums on this album) and I somehow wound up invited to Charli XCX’s birthday party the night before tracking vocals, and I was like, “If I sound hungover, it will be a permanent souvenir of the fact that we went to this birthday party.”

I didn’t make this song a single because I thought it might be too sad to talk about. I wrote it for my dad when he got sick in 2015, but he died before I finished it. It was really hard for me to return to it. Weirdly, four years later, a beloved TV character “dying” opened up some floodgates for me, and I was up til 5:00 a.m. just, like, weeping about Logan Echolls, but really weeping about my dad. Playing a little synth, re-writing this song to be about the surreality of visiting New York without my dad there. “Good Grief” as a lyric and title is somewhat tongue-in-cheek, but it’s earnest about how grieving is healthy. It’s been enough years that I can remember the good and bad of our relationship in a way that feels like growth.

“Ruby Wand”:
I’m not a very gifted or necessarily competent keyboardist. Apart from some Moog Modular noise, I programmed all these arpeggios at home and we just ran Midi through a bunch of vintage synths. I wanted it to feel controlled, computed, strict, with a couple loose-y goose-y guitar and bass solos to push against that. Which parallels the lyrics, which are about OCD and the need for rituals in the midst of unpredictability.

Midway through, the drums are chaos. I wrote them with software drums, like an eight measure nonstop solo, and Zoë translated that into something even more unhinged. Every take she did, Maryam Qudus (who engineered) and I were slack-jawed. Those drums also resulted in maybe the silliest mix reference on the album, Dethklok.

“With Baby”:
“She asked if we were dating, ‘cuz she’d need to tell her manager” is my favorite line I’ve ever scrapped, and what this whole song was originally built around — something someone really said to me once! “Are we dating? My manager and publicist need to know.” Incredible. The plot shifted after reading Jia Tolentino’s Trick Mirror, to be more explicitly about online relationships — how we fabricate a version of ourselves for public consumption and idealize strangers, even though they’re clearly making themselves up, too. “Kissing the hero in the photo booth” might as well be Instagram.

I love Tracey Ullman, and the harmonies on “They Don’t Know” inspired this production, which is pretty ‘80s, or ‘60s girl groups through an ‘80s lens reinterpreted for 2020. This also has some really fast, modulating “Wurlitzer” (on a Nord) that I absolutely did not play in real time. Basically trying to use Midi to sound like Steely Dan. 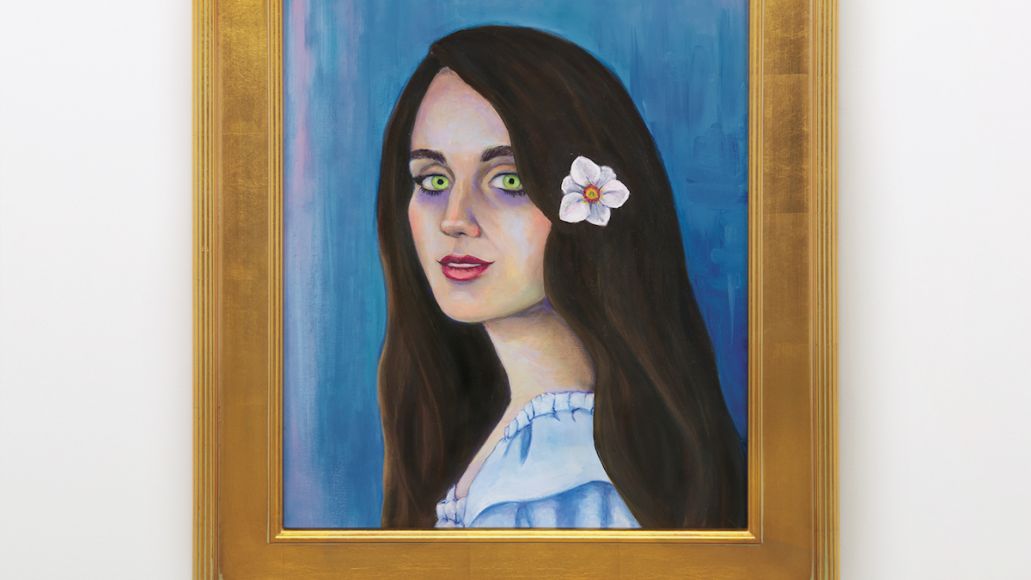 “The Crow”:
I started writing this when David Berman died, also a horrible week with several mass shootings, about how life can be hard and sad and the things that make it less painful — Berman and his music, for example — are also impermanent. I was sitting at Taix, a favorite bar of Eve Babitz, and wished I could process things more like she did. In most of her essays and stories, she seems like a bon vivant, not a depression-spiral-er.

“Crow”, a voice memo I found and wrote the words to, was just some solo guitar riffing in 11/8, probably named for Rob Crow. Zoë and I were driving around listening to “Bags” by Clairo a lot, and I wanted to copy its drum machine sound for this weird time signature; originally all the drums were from a Wu-Tang sample pack, but they wound up sort of nu-metal instead. When I got to Louisville for this session, there had been a minor fire at the studio. So we had to go stay elsewhere and postpone the session. “Hiding out until the smoke just passes” as a lyric was a last minute addition written while the fire department ventilated the studio.

“Take Care”:
Ys by Johanna Newsom is one of my all-time favorite albums, and it gave me the chutzpah to arrange for woodwinds and strings on “Take Care.” Also the string arrangements on the Aimee Mann album Mental Illness, which really envelop the voice and guitar. This is another song where I got rid of half the lyrics because less felt like more. My forever buddy Rick Maguire from Pile did the “Bill Callahan vocals” I was hoping for.

“Market Hotel“:
I love eponymous band theme songs — “Theme from Krill” “Wilco (The Song)”. I might as well have called this “Quilty”. For a tiny second in 2017 my pre-Speedy Ortiz band was going to get back together, and I basically wrote this as a meta theme song for Quilty’s reunion. We did not in fact get back together, so it’s called “Market Hotel” instead. It’s about playing punk shows in 2008 as a loud band absolutely no one cared about, when sexism in DIY felt de rigueur. Some of that time was a lot of fun. Other parts, less. I’m very proud of the “Teenage Dirtbag” reference.

I was hearing The Cars for this and really wanted to use a Mini-Korg 700 (the “Just What I Needed” synth) but couldn’t track one down. I think I played a Minimoog on this instead. A few months later on tour with Letters to Cleo I noticed a Mini-Korg on stage. I was nerding out, like, “That’s The Cars’ synth!” Little did I know Greg Hawkes, The Cars’ keyboardist, was joining Cleo onstage that night. So it was quite literally The Cars’ synth, just three months too late.