Aftershock Festival has unveiled its 2021 lineup, and it’s stacked with metal and punk heavyweights. Metallica, My Chemical Romance, Limp Bizkit, Mastodon, Rancid, Gojira, and more are on the four-day bill.

It was previously announced that Metallica and MCR would headline the 2020 edition of Aftershock. When that fest was canceled due to the pandemic, it was revealed that both bands would be back for the 2021 edition. Now, the rest of the lineup has been announced.

Update, May 7th: My Chemical Romance have put off all touring until 2022, and have been replaced on the 2021 Aftershock bill by the Original Misfits. Full details here.

While Aftershock has always featured a who’s who of metal and hard rock, the 2021 edition offers a strong representation of punk, as well. In addition to Rancid, acts like Social Distortion, The Offspring, Pennywise, and more are among the punk-rock bands found on the bill.

“We can’t wait to play at Aftershock 2021 with our Bay Area brothers Metallica,” stated Rancid in a press release. “We first played with them on the Lollapalooza tour in 1996 along with the Ramones and later down the road we toured across South America together. It’s gonna be wild, see ya in the pit!”

As with the entire music industry, it’s been a tough year for festival promoter Danny Wimmer Presents. The company had to cancel all of its major 2020 U.S. festivals, including Aftershock, Sonic Temple, Louder Than Life, and others. Lately, Danny Wimmer Presents has been producing high-quality streaming shows, including Corey Taylor’s recent gig at The Forum and Puscifer’s upcoming concert from the middle of the Arizona desert.

Single-day, three-day, and four-day passes are available now from the official Aftershock website. Watch the official trailer and view the day-by-day lineup in the poster below. 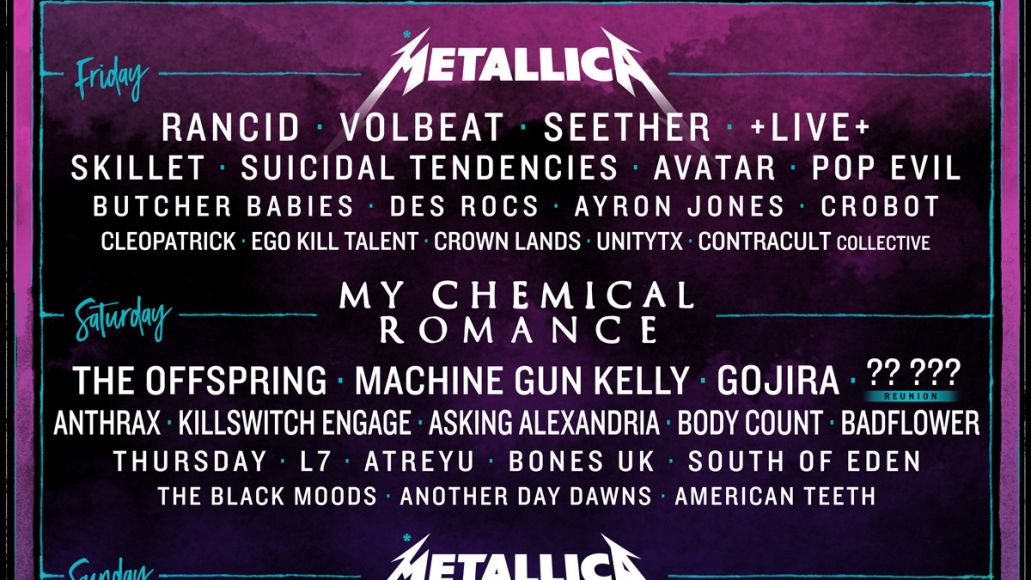