The Lowdown: Ever since they first stole our hearts about 20 years ago, Gorillaz — the genre-splicing virtual band spearheaded by Damon Albarn, Jamie Hewlett, and now Remi Kabaka Jr. — have provided about as much visual flamboyance and experimentation as musical. In other words, they’ve always made exceptional use of things like music videos, 3-D concert projections, and web-based gimmicks to not only enhance the impact and mystique of their albums and lore but also to push the limits of what modern, multimodal artistry can achieve in a broader sense.

Earlier this year, they announced arguably their most ambitious endeavor yet: Song Machine, a web series wherein each “episode” features a new song/music video that encapsulates Gorillaz’s trademark tongue-in-cheek bizarreness, stylistic flexibility, and enticing incorporation of guest musicians. In terms of its overarching story arc — and as the official press release explains — “Noodle, 2D, Murdoc and Russel have visited Morocco and Paris, London and Lake Como, as well as travel[ed] all the way to the moon.” In-between episodes are “Machine Bitez”, brief skits and interludes that tie things together.

Naturally, they’re putting out an accompanying soundtrack as well (sans “Machine Bitez”), which is Song Machine, Season One: Strange Timez. (There’s also the Gorillaz Almanac book that releases a week prior and includes a copy of the album.) Packed with roughly two dozen additional players — including resonant creators like Beck, ScHoolboy Q, St. Vincent, Elton John, Moonchild Sanelly, Joan As Police Woman, and Robert Smith — the sequence could best be described as the lovechild of 2018’s The Now Now and 2010’s Plastic Beach. It’s more pleasingly varied and striving than the former, yet not as important or memorable as the latter, so it’s a predictably enjoyable yet marginally shallow journey.

The Good: Although the sequence doesn’t follow the same order as the episodes, it flows very smoothly nonetheless, maintaining fluid pacing while also shifting styles with consistent regularity. Opener “Strange Timez” is a clear highlight, with a captivating fusion of lively timbres and rhythms — including trumpets, dazzling bells, and robotic tones — surrounding a juxtaposition of Albarn’s monotone statements and Robert Smith’s characteristic airy angst. Thus, it succeeds at coating its engrossing songwriting core with pensively mournful soundscapes. Afterward, Beck leads “The Valley of the Pagans” (an equally compelling tune that replaces the chilling isolation of its predecessor for a warmer, disco-esque celebration) while “The Lost Chord” finds Gorillaz at their most glitzily hypnotic and soothing (with support from Leee John).

Elsewhere, St. Vincent helps make “Chalk Tablet Towers” a peak example of 1980s synth-pop revival; its good vibes are undisputedly infectious, if also facile. There’s also “Désolé”, a gripping slice of symphonic R&B — with eclectic beats — that harkens back to the haunting and dense hodgepodges of Gorillaz’s initial output. Even the bonus disc contains some of Song Machine’s top material, such as the catchy “With Love to an Ex”, a Moonchild Sanelly-led voyage into nightmarish leisure. Also, closer “How Far?” invites Tony Allen and Skepta to join in for its representatively in-your-face hip-hop social commentary backed by a fascinating collage of disturbing and dreamy textures.

The Bad: As usual with a Gorillaz record, Song Machine’s majority of strengths are somewhat marred by some lesser inclusions that are either too inconsequential or too familiar. In particular, “Pac-Man” and “Aries” really feel like nothing more than slight alterations of formulas that they’ve followed countless times before. In contrast, and despite its interestingly incongruous juxtaposition between 6lack and Elton John, “The Pink Phantom” is fresher yet aggressively tedious and saccharine. Going back to the bonus disc, its starter — “Opium” — is bright but meandering as well, whereas “Simplicity” seems like a lightweight and unfocused demo in need of a fuller realization.

The Verdict: At the very least, Song Machine, Season One: Strange Timez is an improvement over its two immediate predecessors, as it has more substance, diversity, and breadth. Once again, Gorillaz’s ability to infuse their immaculately polished and idiosyncratic production with the wide-ranging talents of their guests is commendable, too, ensuring that their work remains charmingly singular by default. Sure, its lesser moments are expectedly artificial and monotonous — that, too, knowingly comes with the territory — but there’s more good than bad here, and most Gorillaz devotees will surely adore it.

Essential Tracks: “Strange Timez”, “Désolé”, and “With Love to an Ex”

Pick up a copy of Song Machine, Season One here… and the deluxe edition here… 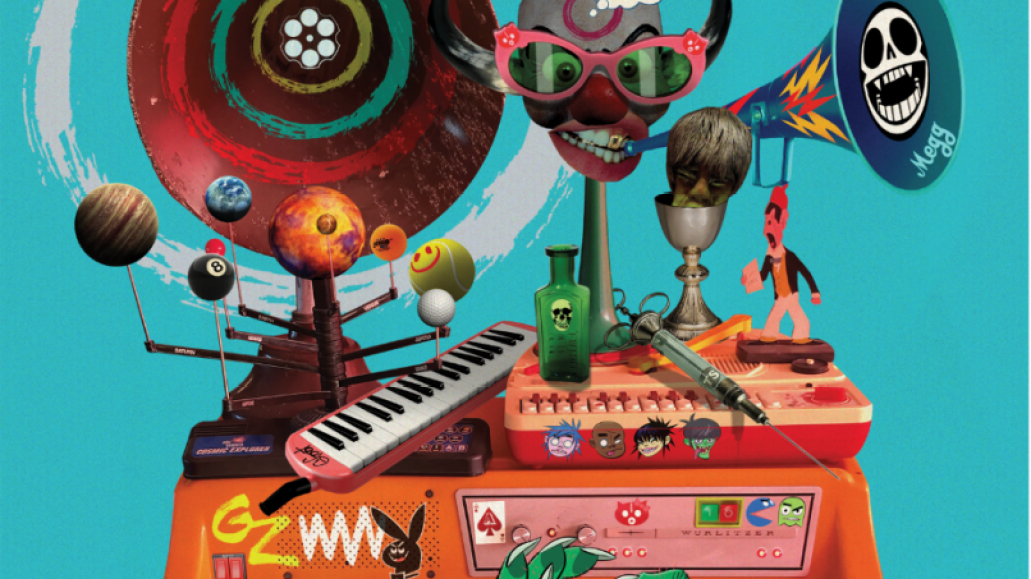