Setting the Stage: Under normal circumstances, fans would quite possibly be enjoying seeing Puscifer performing tunes off their latest album, Existential Reckoning, at a packed venue. But, of course, 2020 has thrown us countless curveballs — tops being the COVID-19 pandemic canceling all extensive tours and most in-person performances. Fortunately, some bands have become creative and found other ways to perform – whether it be drive-in outdoor concerts (where fans can watch from afar while in or around their car), or via professionally filmed livestreams.

On October 30th (the same date that Existential Reckoning was released), Puscifer opted for the latter, offering a show from the middle of the Arizona desert for fans to view on their most convenient electronic device with the purchase of a virtual ticket. The concert, dubbed “Existential Reckoning: Live at Arcosanti”, featured members Maynard James Keenan (vocals), Carina Round (vocals), Mat Mitchell (guitar/electronics), Greg Edwards (bass/electronics), and Gunnar Olsen (drums) performing Puscifer’s brand-new album in its entirety, front to back.

Taking the Stage: As previously stated, the performance was simply the album performed from start to finish, in the exact sequential order as the LP – so those expecting surprise covers, earlier tunes, or special guests were out of luck. But there were several pre-filmed bits interspersed throughout, including an opening scene of Maynard as the fictional character Billy D, lost in the dessert, before finding a chair near a cliff, and yelling, “Where’s Arcosanti?!” (with the scene shot entirely in old school black and white).

The opening number, “Bread and Circus”, begins with scenes of a dimly lit stage shrouded by dry ice fog, with Mitchell tapping his fingers on an electronic device illuminated by a variety of different colored buttons (Mitchell and Edwards would take turns poking this object throughout the show). No clear close-ups of the band members are offered during this opener – although you can certainly make out that the members are dressed in the same suits & shades attire as seen in the “Apocalyptical” video and promo photos for the LP, amongst all the strobes and pulsing red lights. And from the get-go – and throughout the entire performance – the vocals of both Keenan and Round sound absolutely exceptional (kudos to the sound team — and if you can listen with a pair of quality headphones, please do so… you won’t be disappointed).

The next performance was one of the evening’s most memorable, “Apocalyptical”, which started with horizontal beams of lights behind the band, so you can only see their silhouettes in front (while the fog machine continues to keep the stage … foggy), before an image of Maynard from the song’s music video appears on several screens in back. And then FINALLY a clear shot of the band members’ faces, as we see that Maynard now has some white streaks in his otherwise jet-black wig.

And then the entire area behind the band is lit up to show that – voila! – the group is not performing indoors, but rather what appears to be…outdoors. Other standouts include the fact that Mitchell is playing a Steinberger guitar, both singers have their mics on an apparatus that is connected to their bodies (rather than utilizing a traditional mic stand), and a striking overhead / bird’s-eye shot of the entire stage. And at the end of the tune, both singers walk off stage and through a hallway and into another room, which somehow/someway, the other members are already in and continue to play the song! 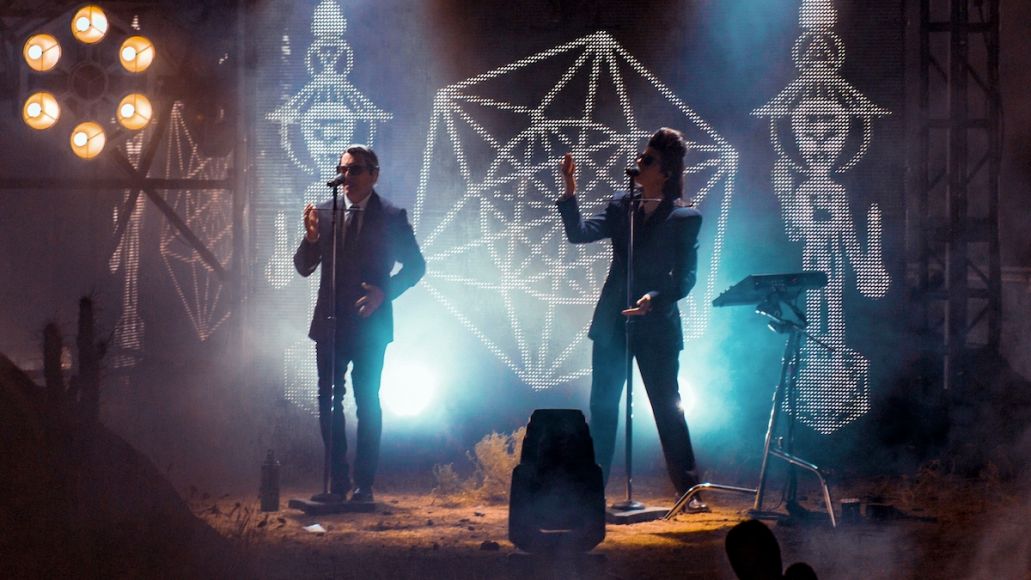 For such subsequent performances – including such tunes as “The Underwhelming” and “Grey Area 5.1” – both the singers are spotted standing atop scaffolding, often singing to each other. Another standout moment was during “Theorem”, which begins with more black & white footage – this time of Maynard (not in the opening scene’s costume… but rather in the same apparel he’s wearing for the musical performance) being driven in a car through the desert and walking through the desert, with also scenes of the band continuing to perform (also in black and white), finding a metal briefcase – before the entire thing returns to color.

For “UPGrade”, we discover that it appears as though the band is now performing in the dessert (as seen by the sight of cacti and sand) – as it was difficult to tell from certain songs if they were indoors out outdoors. But this clinches it! And for the show’s closing number, “Bedlamite”, it begins with a beautiful wide screen shot or the band and the sunrise behind them. Also, the repeatedly sung phrase, “Everything will be alright,” gives an oddly comforting feeling concerning the current topsy-turvy state of the world.

The performance comes to a close with the band now in full sunlight and full views of all the instruments, gear, screens, light cranes, and lighting directors, with both singers facing each other silent – while still standing on the scaffolding. And as a bonus bit, at the end, there is a skit involving part of the group performing and the other part witnessing a drunken karaoke performance inside a bar setting (with the mysterious metal briefcase ultimately being left behind).

To the credit of Puscifer and the production company (festival promoter Danny Wimmer Presents), the concert was captivating from beginning to end, despite the fact that the band only played the “new stuff.” With eye-popping visuals, unpredictability, and great sound (again, particularly in the strong vocals by Keenan and Round), it was well worth the price of admission. Which leads one to wonder – when normal in-person concerts do resume, will fans prefer watching livestreams from the comfort of their home (with exceptional sound, no parking fees, no $15 Budweisers, and no longer being stuck like a sardine behind a 6’7” giant obstructing their view of the band)? Who knows? Of course there’s something to be said about the exultation of a live concert experience, but kudos to Puscifer for making the alternative a very viable and enjoyable option.

Missed the show? Don’t despair. The concert’s streaming availability has been extended through November 8th, and you can purchase tickets here. See the setlist and additional photos below.

“Existential Reckoning: Live at Arcosanti” Photos (all by Mitra Mehvar): 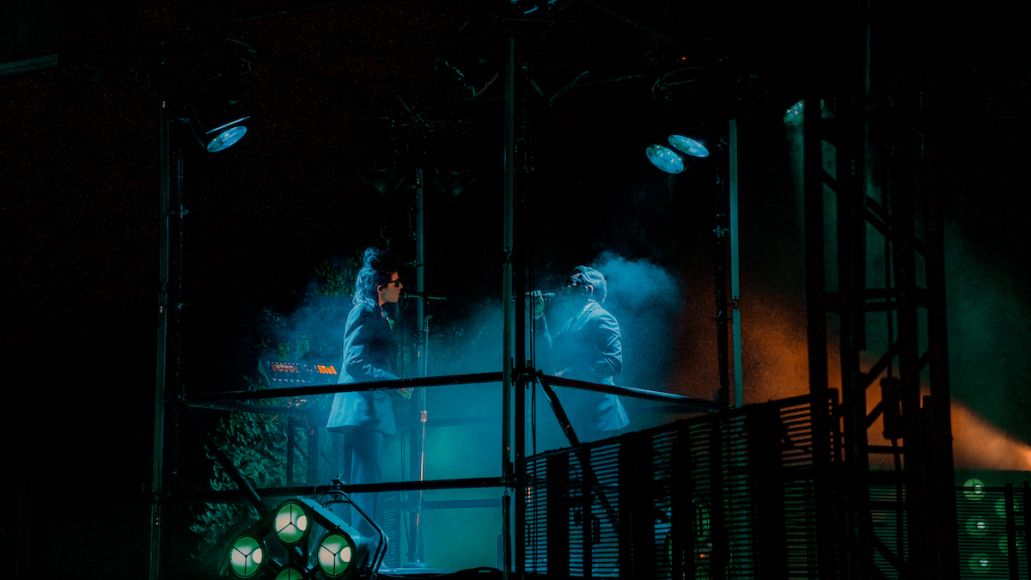 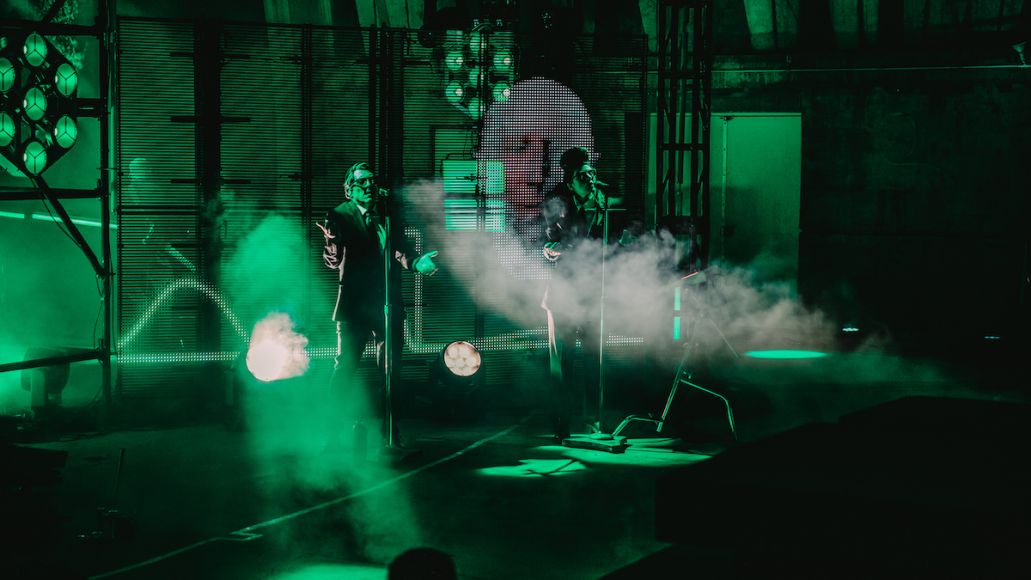 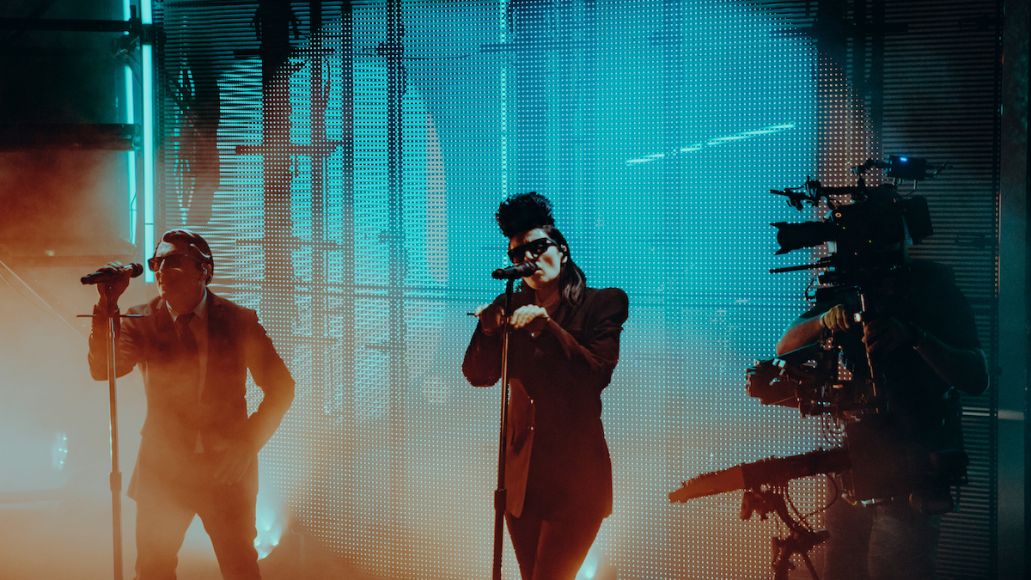 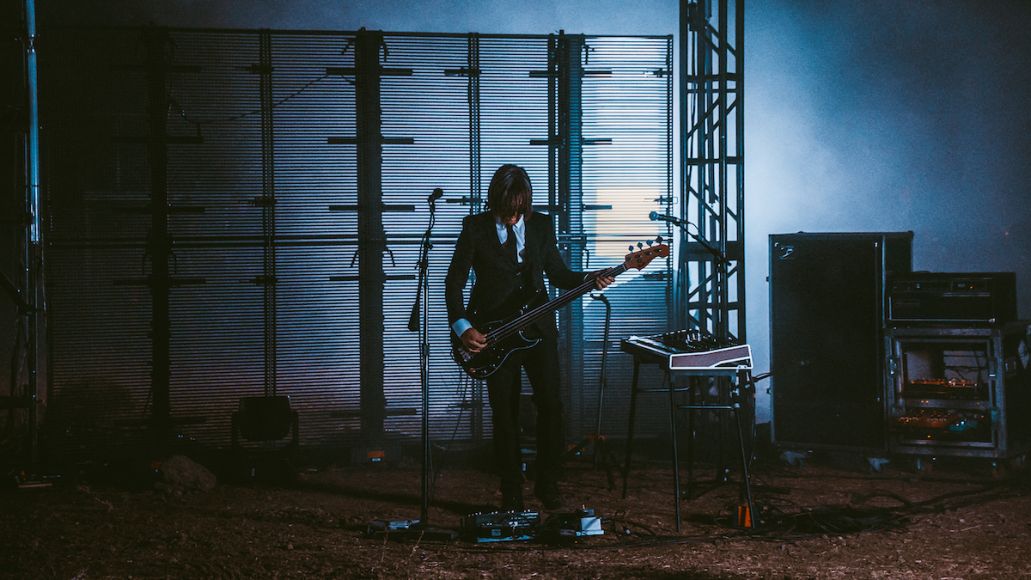 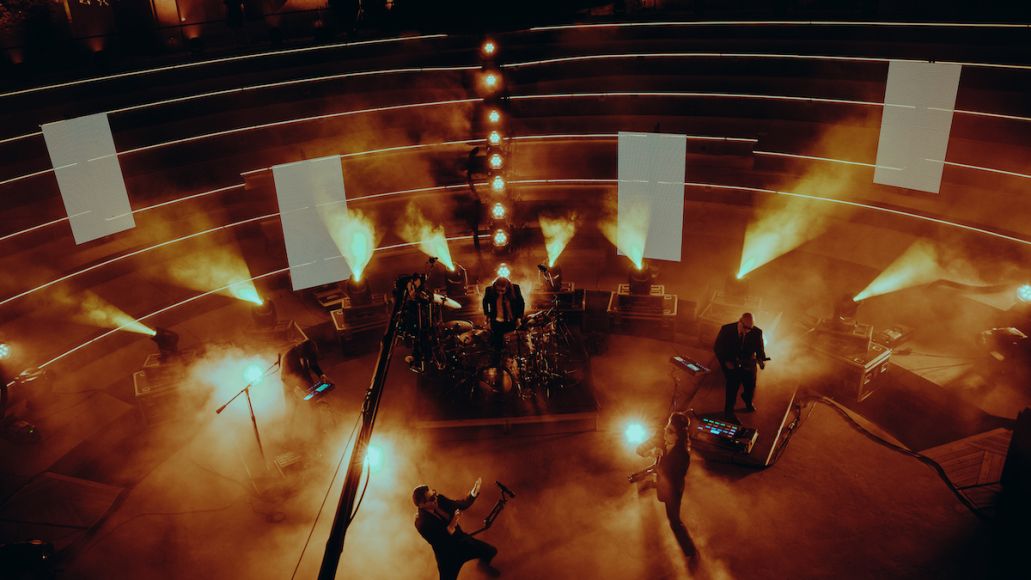