The Pitch: Adam Sandler is pulling from his bag of tricks with the new Netflix movie Hubie Halloween, bringing together a cast of old stalwarts for a spooky comedy set in Salem, Massachusetts on a particularly creepy All Hallow’s Eve. But is it actually funny?

Another Strange Voice: Sandler has played his fair share of oddballs, from Bobby Boucher in The Waterboy to the son of Satan in Little Nicky. For his latest Netflix venture, he’s Hubie Dubois, who would seem to tick all the boxes of being the local weirdo. Lives with his mother? Check. Mumbly voice? Bingo. Awkward around women? You got it. But Hubie is so ill-treated by just about everyone in town that he quickly becomes a pitiable protagonist. Hubie lives in Salem, a town that thrives during its Halloween celebrations, over which he acts as an “official volunteer Halloween helper”.

This Halloween will be different for Hubie, who begins to think things are amiss as some of his tormentors go missing, all while an odd new neighbor (Steve Buscemi) acts awfully werewolf-like. Oh, and there’s also an escaped patient from a local mental institution on the loose. 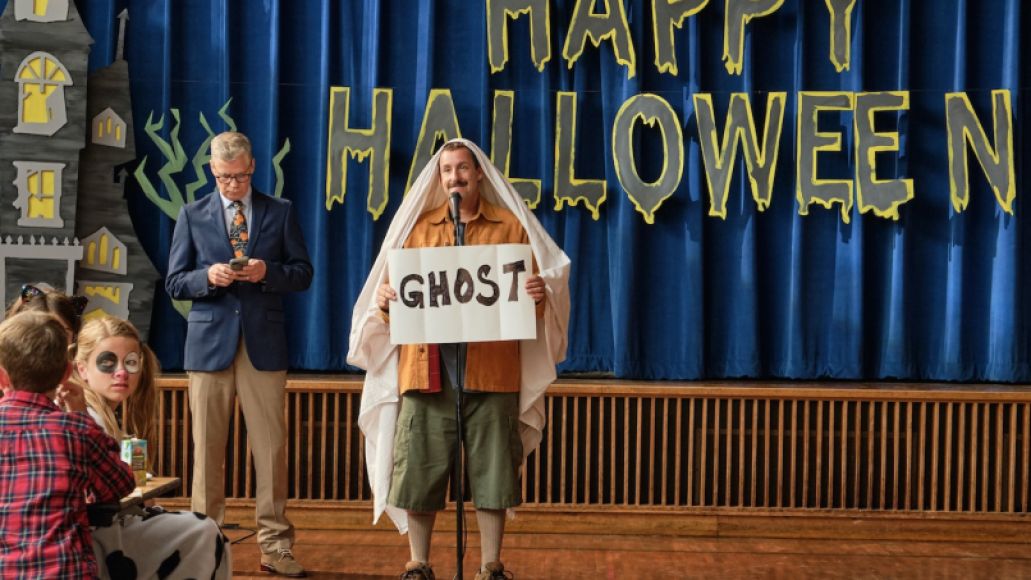 A Busy Story: For a movie that lasts just 90 minutes before the end credits roll, there’s a lot going on in Hubie Halloween, which is both to its credit and a bit of an albatross. Leaving aside all the spooky elements, there’s also a tentative romance between Hubie and his old friend from elementary school, Violet Valentine (Julie Bowen). Hubie’s relationship with his mother (June Squibb), too, weighs heavily on the proceedings, with dear old mom encouraging Hubie to stop acting so scared around the many bullies in town. And Hubie Halloween’s cast is as large as the story sometimes feels, with Kevin James, Kenan Thompson, Ray Liotta, Maya Rudolph, Michael Chiklis, Tim Meadows, and others showing up for at least a few scenes of mayhem.

The good news about Hubie Halloween is that the laziness that often marks a boisterous Sandler comedy (especially his more recent ones) isn’t quite as obvious. (His last big Netflix project, Murder Mystery, had an equally impressive cast but its European-set exploits felt like another excuse to just take a splashy vacation and film some stuff during the downtime.) Sandler’s goofy attitude feels, by now, very familiar but it’s still somewhat charming. In some ways, though, the script (by Sandler and Tim Herlihy) stacks the deck so far against Hubie, by portraying many of the townspeople as outlandishly cruel. It’s hard not to feel bad for a guy who gets shoved into an open grave at one point, by Liotta’s character, after Hubie sympathizes with him for having lost his dad.

Cheap Thrills: Hubie Halloween, once you boil it down to the actual spooky side of things, is a shaggy-dog story, with less interest in actually revealing some supernatural baddie overseeing the events and more in just watching Sandler interact with the ensemble. Unlike earlier Happy Madison productions, this isn’t wildly puerile or full of gross-out humor. (That, in spite of an early projectile-vomiting bit that implies otherwise.) The flip side is that Hubie Halloween isn’t really … y’know, funny. It’s not so much that the film’s trying to be funny and failing, as much as it’s just … there. Perhaps the funniest material is courtesy of Buscemi, who seems like a friendly and kind new neighbor, unless he’s actually a werewolf who’s struggling to fight the temptation of the full moon. (Spoiler alert: He is neither of these things.)

Kindness is the key to the film, unexpectedly so. Hubie is harmlessly weird, but basically everyone else in Salem (save for just a few others) focuses on how weird he is and acts cruelly towards him for it. It would be wrong to imply that Hubie Halloween doesn’t have a mean bone in its body. (Again, this is a movie where Adam Sandler is forcefully shoved into an open grave for laffs.) But the film’s eventual spirit is revealed to be much more in favor of acting decently towards others than on wanton cruelty, which is at least a nice final-act surprise.

The Verdict: Compared to a lot of other Adam Sandler movies, Hubie Halloween is watchable without being actually very good. But if you’re hoping for him to continue challenging himself in light of films like Uncut Gems or The Meyerowitz Stories … well, those are streaming on Netflix too. Just watch those instead.