The Pitch: As recalled in Daphne du Mauier’s famed 1938 Gothic novel of the same name, our narrator and young, nameless lady’s companion (Lily James) meets, falls in love with, and marries a wealthy, older Englishman and widower, Maxim de Winter (Armie Hammer), while on holiday in Monte Carlo and returns with him to his lavish Cornish estate, Manderley. She soon begins to notice the long, profound shadow her husband’s recently dead wife, Rebecca, hauntingly casts over Maxim; family and acquaintances; household servants, including cold, austere housekeeper Mrs. Danvers (Kristin Scott Thomas); and even the animals. As the second Mrs. de Winter grows increasingly frustrated with the strange power her predecessor possesses, even from beyond a watery grave, she slowly begins to learn the truth about Rebecca, her demise, and several other secrets kept within the aging walls of Manderley.

Déjà Vu: Here’s the rub. Rebecca has been done before and done masterfully. That usually spells doom for a remake. After all, who wants to watch an inferior stab at source material when Old Hollywood masters Alfred Hitchcock, Laurence Olivier, and Joan Fontaine created the definitive version 80 years ago? But like any masterpiece, there’s still enough thrill and tension to be found each time around in this ghostless ghost story if executed well. Unfortunately, director Ben Wheatley and his crew never quite find sure footing around the grounds of Manderley. Rebecca is a tale of secrecy, jealousy, and insecurities revealed in dribs and drabs where nothing is quite as it seems (a perfect first Hollywood project for Hitchcock, in retrospect). While Wheatley’s take finds that pacing well enough for most of the film, it too often disappoints when the payoffs come and winds up making some boring choices. More on that in a moment.

Rebecca’s Retinue: The towering Hammer (and his disappearing accent) proves the weak link in a cast that’s been largely whittled down to the story’s essential characters. He pulls off a hunk in a mustard suit far better than an aloof and tormented widower. Olivier casts as long a shadow as Rebecca, but it feels like the script goes through painful attempts just to convince us that this Maxim indeed shoulders a troubling secret. On the other hand, and more importantly, we believe James’ tantrums and tears as her character feels more and more overwhelmed and crushed by Rebecca’s enduring memory. Of course, any version of Rebecca will hinge upon how well the part of Mrs. Danvers is handled. Scott Thomas doesn’t disappoint here. As the sinister head housekeeper of Manderley — plain-clothed, hair and skin pulled back tight, and eyes blue and icy — her Danvers elicits a slight chill each time she enters a room. As it should be. 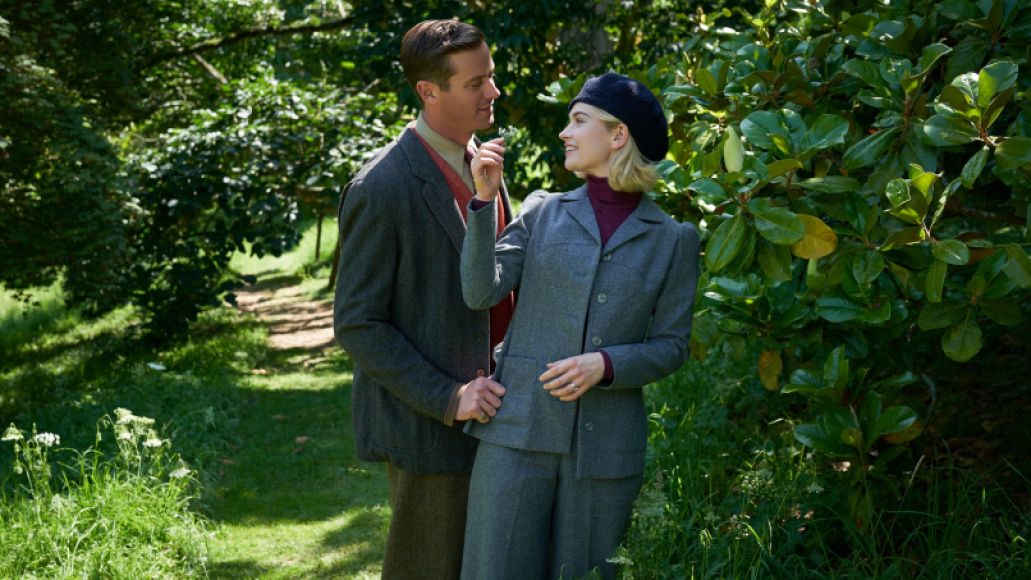 Manderley Renovations: The film looks beautiful. The vibrancy of bright Monte Carlo juxtaposed with the gloomy greens and drab corridors of Manderley make the locations themselves characters in a way they never quite could be in black and white. Bon Jovi would surely approve of Rebecca’s cause of death returning to a shot through the heart (as in the novel) rather than an accidental blow to the head (as in Hitchcock’s). Still, other story choices make less sense. In the Monte Carlo setting, we see a huge deal made by all about the narrator’s poor station in life, but the scandal of her marrying a wealthy widower never really plays out to any meaningful effect once at Manderley. And while it might be a progressive step to see the second Mrs. de Winter — who, we recall, doesn’t even warrant a name of her own — take a more active role than in past versions in protecting her husband from prison and humiliation, it’s hard to believe such an overwhelmed and passive, young woman would suddenly find that type of agency. It makes for a finish that doesn’t quite match its build.

Riches and Rags: Rebecca is a psychologically rich story with so much to pick at and probe. That means decisions need to be made on where to focus, and Wheatley bats about .500 in that respect. Arguably the film’s best sequence follows the orchestrated debacle at the ball and the narrator’s emotional breakdown, which leads to Mrs. Danvers nearly ridding herself of her beloved Rebecca’s competition once and for all. At that point, Rebecca has so haunted the thoughts of her successor that the image of her tattered corpse floating to the surface of the sea actually feels earned. In other instances, it feels like Wheatley misses opportunities. The pivotal boathouse scene in which Maxim comes clean feels clumsy and rushed, and we barely scratch the surface of the peculiar nature behind the relationship between Mrs. Danvers and Rebecca. That’s an area future filmmakers might do well to delve into.

What’s Streaming on Netflix in October 2020

Rebecca 2.0: Most will be visiting Manderley and meeting Rebecca de Winter for the first time when they scroll across this remake on Netflix. That’s fine. It’s a beautiful-looking film that may pale in comparison to its Oscar-winning ancestor but still offers enough thrills to make it worth viewing. Part of the value of remakes is that they update old material in a way that modern audiences can access and appreciate. While I’d hope that the publicity around this film would make viewers curious about the Hitchcock adaptation or even du Mauier’s novel, the reality is that a modern update will both keep this chilling, psychological thriller alive and possibly inspire a future filmmaker to one day take the story of Rebecca, Manderley, and all living under her spell there to new cinematic heights.

Where’s It Streaming? Rebecca will be haunting limited theaters in the United States starting October 16th. It will also be available to stream on Netflix beginning October 21st.