Sorry, but there really are no breaks from this fucker until we have actual, steady control over this present strain of novel coronavirus. When the culture is illness, you don’t hide under coats until the whole thing blows over. You deal head-on. And this review for this particular movie will treat the issue in that way. Despite President Trump’s assertions that COVID-19 is “totally under control,” no, it’s not. And that, in a dish served cold and fast, is the case of the new documentary Totally Under Control.

With 210,000 dead in the United States and rising, millions infected, and a president unwilling to acknowledge the hubris of his actions while himself testing positive for the disease, we’re far away from anything remotely resembling “control” at this present moment. But directors Suzanne Hillinger, Ophelia Harutyunyan, and Alex Gibney dauntlessly assemble the narratives of the last 10 months into a film that seems to cover a decade’s worth of material. With clear eyes and carefully considered assemblage, the trio professionally synthesize thousands of pivoting headlines and misdirections into perhaps the cleanest bullet-point list yet of what’s gone wrong and what America can do to combat COVID-19. Totally Under Control is a sobering account of why we’re in this mess.

COVIDIOCY: Hillinger, Harutyunyan, and Gibney quietly shaped this project over the last five months, and the timing of its release is pointed. And for good reason. To the average, exhausted American, the pandemic may not seem like news. We’re still hunkering down. But for even the most apolitical — or god forbid, naïve — individual, living in America seems akin to absorbing machine-gun fire on a daily basis. Oh, where’s Fauci? Oh, what’s up with the vaccine now? Oh man, Trump’s going off again on Twitter. It’s so hard to keep up, so deadening that it’s hard to avoid lapsing into apathy. Life is but a gameshow, and they have COVID, and they have COVID, and around and around.

But this documentary sees the White House’s public displays of jazz hands for what they are and stops to think, reflect, and report on precisely what’s wrong with what’s been going on. There’s science here and journalistic cleanliness. A refreshing lack of celebrity recount, replaced instead by rightful reminders of just how long the emperor’s gone without clothes and how everyone else has been left to suffer. At a cultural moment where the news is something like BLAZE STARR AND NEWS CRISIS POWER HOUR, Totally Under Control cuts through the chaff. Hillinger, Harutyunyan, and Gibney get to the essence of what’s gone wrong. 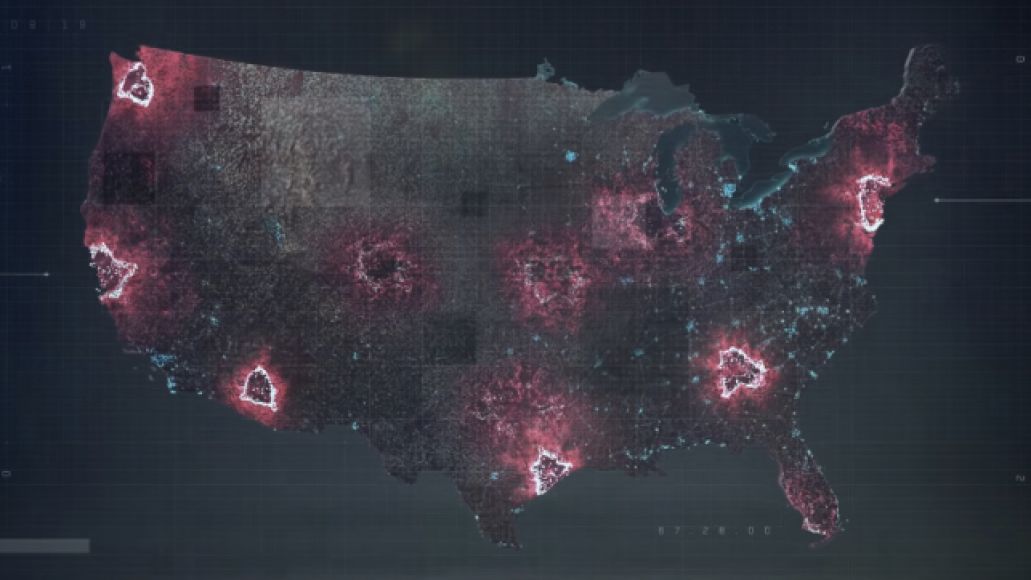 Totally Under Control successfully narrativizes US mismanagement, misdirection, and sheer lunacy in the face of the greatest public health crisis of this era. The doc offers a new public record for just what the hell happened that led America into its current crisis. In the wake of Hurricane Katrina, former President Barack Obama once stated that “when disaster strikes, it tears the curtain away from the festering problems that we have beneath them.” How apropos.

And what lies beneath the political theater? There are the incestuous, inexperienced hires (lobbyists, mostly) in place at organizations like Health and Human Services and the CDC, where more serious and medically inclined professionals should have served. The directors recount how and why COVID-19 tests were both delayed and flawed when first rolled out earlier this year. There is reasonable skepticism about China’s initial reports on the outbreak, but more importantly, there are also lessons to take away from South Korea’s relatively successful handling of the incoming pandemic. There’s the politicization of masks. Names and faces are assigned worthwhile blame in the form of Jared Kushner’s PR machine and Dr. Deborah Birx’s faith-based medicine — and those are only two among the literal dozens of other friendship-based appointees by the White House.

And of course, there’s the big man. The walking “I don’t give a fuck” of a President unwilling to step in and do anything of value or meaning. Like the last decade’s financial crisis, there’s so much blame to go around. But Hillinger, Harutyunyan, and Gibney do their damnedest to keep all of his nonsense wrangled, and to the doc’s credit, it all makes sense. It’s easy to follow and understand and hard to miss the litany of errors brought on by 2020’s abuses of bureaucracy. The filmmakers record the right blunders and assure Americans that they are living in a total structural albatross. Sadly, they raise the essential question: Just when did America become such a shithole?

Maybe it’s been a long time coming, but it took the right people to let citizens see the rot. Yes, it’s a joke du jour to piss and moan that Trump’s golfing again. But to Totally Under Control’s credit, that little note is met with the proper anger in return. Trump, and the people that surround him, truly do not care. And in that light, the doc is potent and maybe even galvanizing. If the point is to stir the pot, then consider Totally Under Control a highly potent blend. Laziness, poorly worded response, limp action, annotated with experts and worrisome clarity by experts. The loudest voices are often the worst, and this doc reminds us to listen better to the little people trying to help in bigger and better ways. 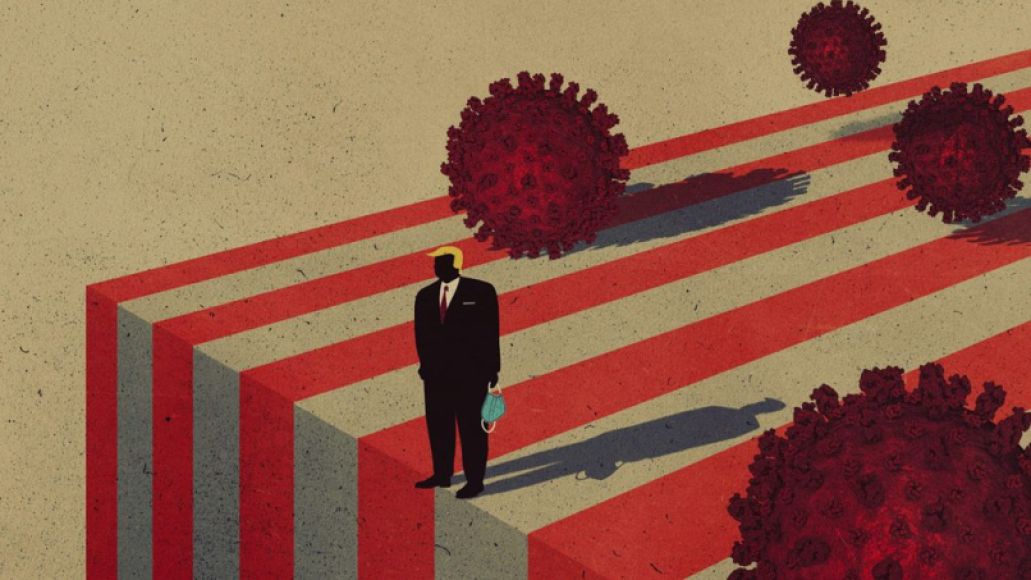 “I Don’t Take Responsibility at All”: It’s tempting to lay it all on Trump. The man’s a dissuasive quote machine. But what Totally Under Control successfully conveys is twofold. One, the man’s a carnival barker. Everything’s good, great. The bEsTtt-tuh. Angelic, even. And two, the documentarians point-blankly juxtapose Trump’s platitudes against hard-to-argue statistics and interviews in a way that reminds us just how hollow his words are and have been.

Take the hydroxychloroquine gambit. Trump tells a reporter, as though she’s a six-year-old, that the new and untested drug is going to be like a miracle from heaven. And the patronizing tone, the eerie manner in which he speaks at the White House press podium, pairs brutally well with interview footage of Dr. Vladimir Zelenko, regretful hype man for the malaria drug. The doctor appears to explain how one web video of his pitch for hydroxychloroquine suddenly became a truncated talking point while hanging his head at how inappropriate that all felt. An untested suggestion suddenly became a cure for the Trump team. And that speaks to the administration’s M.O.: Act fast, fuck testing, and if it doesn’t work, it’s not our fault. Trump is a major symptom, but the root causes are not to be ignored.

Totally Under Control deserves credit for granting some degree of esteem to people with expertise. When studies keep suggesting that FOX News dissuades people from social distancing and that Trump himself is one of the biggest sources of disinformation in this crisis, this film attempts to re-center those with knowledge and experience.

Bless the filmmakers for putting smart people on camera while going to painstakingly safe lengths with socially distant photography. Doctors, volunteers, and government officials break with official lines to speak soberly. BARDA director Dr. Rick Bright brings his emails and laments the difficulty of sounding the alarms for impending disease in January. Dr. Eva Lee gives succinct lectures on the nature of exposure when addressing a germ-based illness. Caroline Chen of ProPublica does the grunt work of sourcing and carefully reporting how COVID-19 came to America. These are people doing their best, daring to say something beyond wishful thinking. In a fraught moment where expertise is suddenly uncool, Totally Under Control values it.

The Verdict: Talk about a film made for right goddamn now. This is Medium Cool for 2020. The pandemic is scary enough, and in 20, 50 years, this doc is going to stand as a living document of just how bad COVID-19 got. But it acts now, right now, to help get the word out on what’s happened, and better yet, what can be done. Here’s a cocktail so potent that it may just snap even the most tired and cynical viewers out of apathy. Take in Totally Under Control, and call us in November.

Where’s It Playing? On demand October 13th and available for streaming on Hulu October 20th. It’s also available for pre-order through NEON. Have a watch party, from a safe distance of course.

Totally Under Control Is a COVID-19 Horror Movie for the History Books: Review