This past weekend, Mike Flanagan’s The Haunting of Bly Manor opened its doors on Netflix. Already, the followup to 2018’s The Haunting of Hill House has been breaking even the most hardened of horror-loving hearts out there with its beautiful depiction of love and loss. But the inevitable debate has come with it as well: Is it as scary as Hill House?

The answer is yes and no.

While Flanagan’s adaptation of Shirley Jackson’s classic novel is more overtly scary — what with its creeping ghosts, mysterious noises, and that Tall Man — the horror within Bly Manor is of a deeper kind. The new series taps into the terror of loving another person, and the deep emotional well that comes with intimacy and relationships.

Granted, the characters living and working in Bly Manor do see ghosts, but the true haunting comes from the memories of lost loved ones. More specifically, the moments they cannot escape, and the lives they cannot continue to live. These dusty skeletons in the closet are inarguably the more horrifying ghouls in Flanagan’s new adaptation. 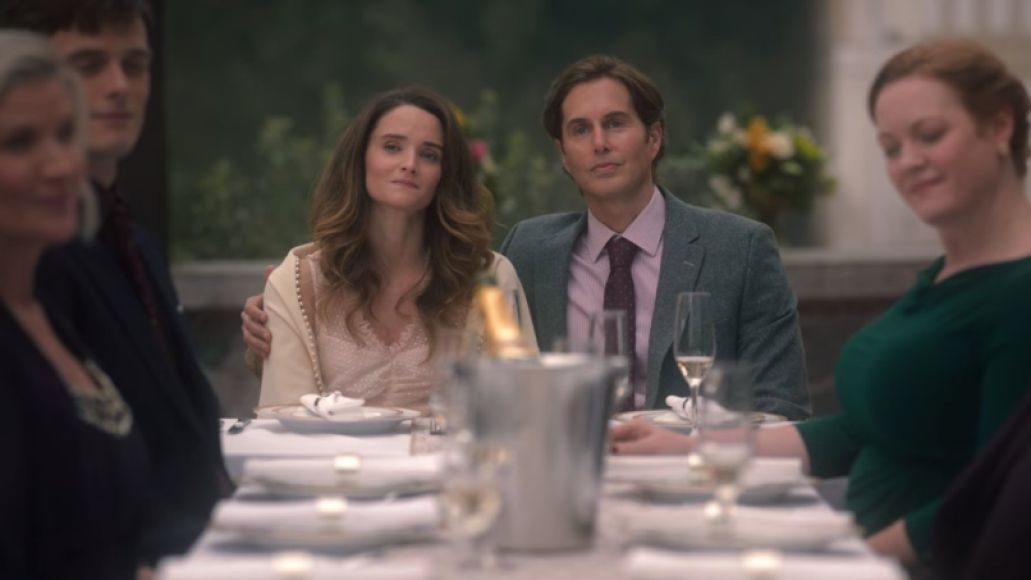 Flanagan states his thesis in the opening scenes with a wedding toast acknowledging the terror of sharing your life with another person, knowing that you may have to watch them die. While that may be the stated fear, there is also risk in entwining your life with someone. When we love another person, we trust them with our hearts, knowing that they are human, both fallible and fragile. Bly Manor explores the inherent terror in relationships by acknowledging that there really are no happy endings because everyone will someday die and everything will eventually fade away.

It’s terrifying to admit that we have so little control of our lives, but it’s a reality we must all face at some point. Though there are no happy endings, there are happy moments, and Bly Manor demonstrates the different ways they can cause both joy and pain. However, Bly also shows us the benefit of believing in the love we share with others, noting that while intimacy can be terrifying, we can survive by embracing these happy moments as they come then lovingly let them go as they fade away.

“And lay your hands over me” 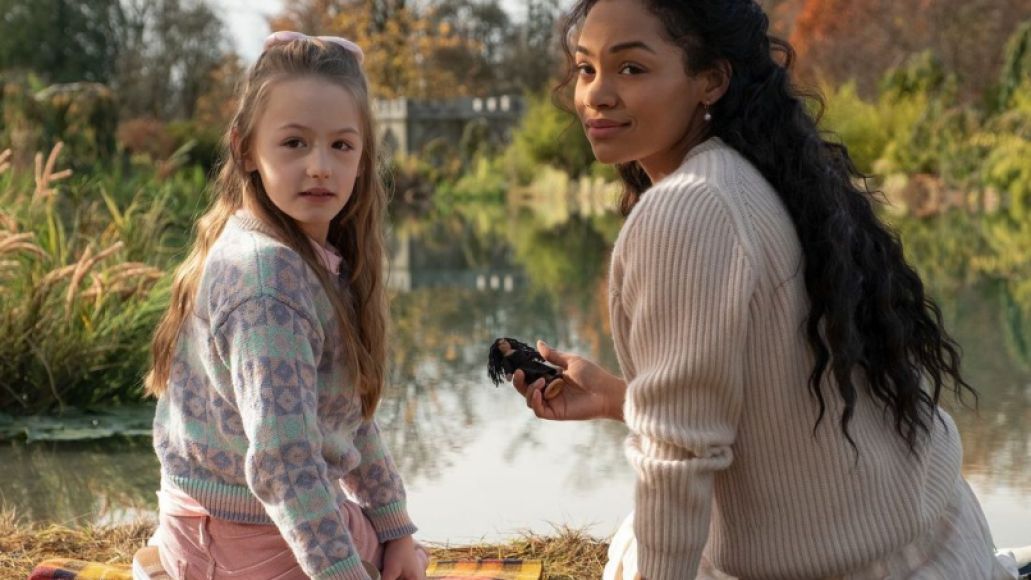 On the grounds of Bly Manor, time exists in a closed loop, providing a terrifying depiction of the afterlife. Characters who die there carry on as spirits, unchanged, flowing through scenes from their past. They are the dolls in the dollhouse, so to speak, drifting through memory after memory, but never creating new stories. Peter Quint (Oliver Jackson-Cohen) calls this phenomenon hopping, and he attempts to control the memories he visits while others are simply swept away by them.

Flanagan has proven to be masterful at playing within the narrative limits of time and space, and here he is touching the infinite by attempting to describe the boundaries of the living and the dead. The effects are both unsettling and heart wrenching as characters walk through the halls of Bly, revisiting the scenes of their past. It’s often not until we see them interact with another character that we’re able to place them in a timeline, showing that it’s our relationships that ground us and make us real. 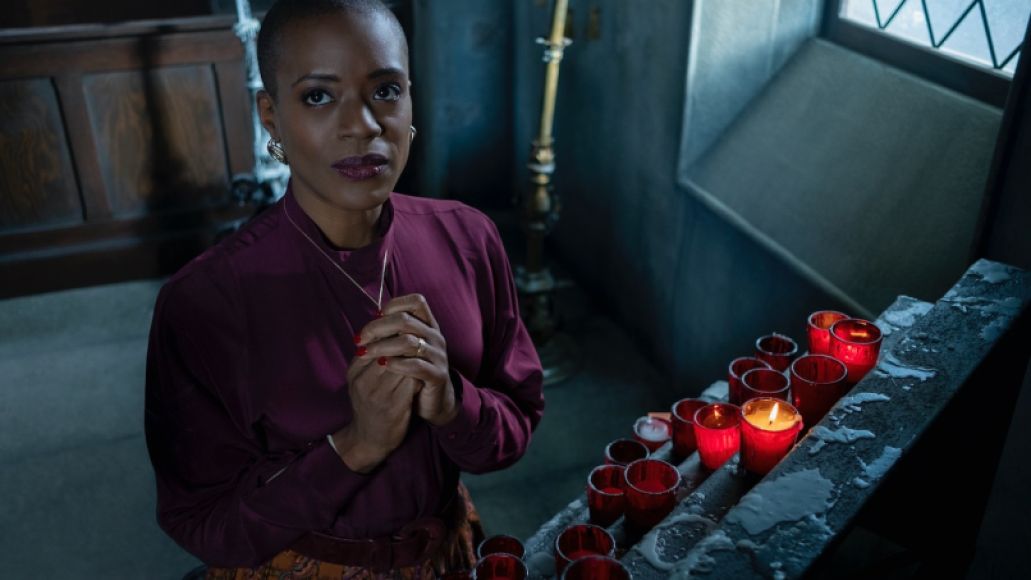 In the stunning fifth episode, “The Altar of the Dead”, Hannah Grose (T’Nia Miller) drifts through the house continuously, seeing a mysterious crack in the walls of the rooms she’s in. It appears and disappears in different places until we finally realize it was the last thing she saw as she lay dying at the bottom of a well. Throughout the episode, she seamlessly weaves in and out of memory and present day as she tries to put the pieces together and ground herself in this terrifying reality.

However, it’s not until Hannah looks down and acknowledges the truth of her death that she is able to move out of the loop she’s been trapped in. Understandably, she’s been terrified to look down, and we’re left wondering if there was a part of Hannah that has known this fate all along. Given that her consciousness is still alive at Bly, and she knows she will remain there forever, it’s possible she was holding on to these memories with Owen Sharma (Rahul Kohli ) in lieu of a life that will never be.

Nevertheless, Hannah’s situation leads to devastating realizations that tap into our deepest fears about our own deaths, and more devastatingly, the lack of control we have over our own destiny. 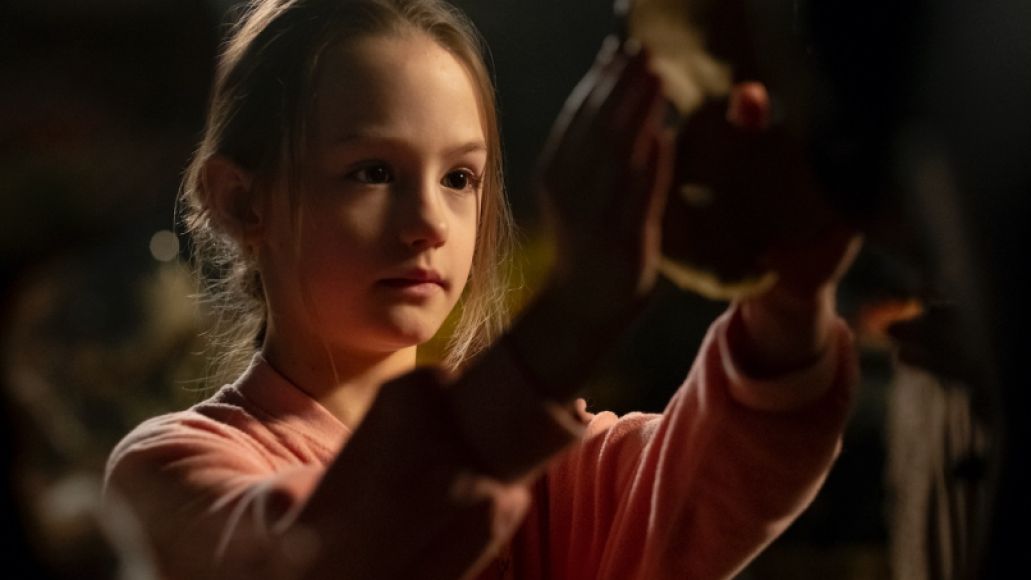 Flora Wingrave (Amelie Bea Smith) is another character who experiences this drifting. Although she’s still alive, Flora, with the help of Peter, is able to visit memories with her deceased parents. She’s a young girl, struggling to process a devastating loss and it’s natural that she would wish to stay in a memory rather than face life without her mother and father.

But as the memory continues, Flora begins to realize that something is wrong. She has changed, but the memory has not. In that respect, the parents she is interacting with are really just manifestations from her own mind — and her mother is really gone. It’s a cruel reality for Flora that reveals the sinister temptation of staying frozen in the past.

Because, in order to continue hopping, Flora will likely have to die, forfeiting a lifetime of memories, all for a temporary respite from grieving.

“Would I turn away from you…” 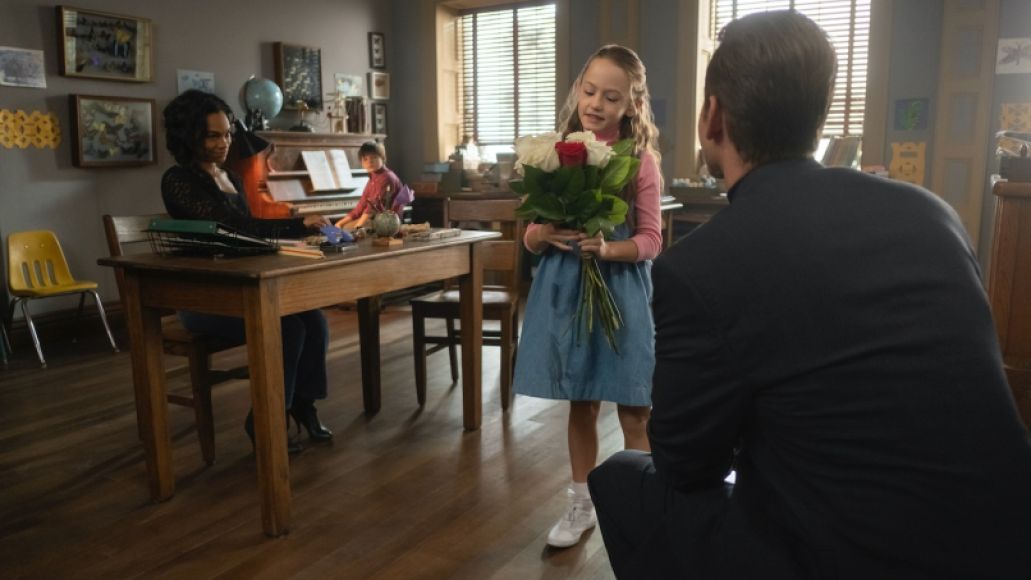 The more we begin to understand this phenomenon, the more we realize its inherent dangers. After all, not all of our memories are pleasant. Flanagan spotlights this notion through the sordid relationship between Peter and Rebecca Jessel (Tahirah Sharif ).

As we learn, Peter continuously returns to the moment he gave Rebecca a fur coat. On the surface, it’s a pleasant memory for him, but uncomfortable for her, and it reveals the toxic heart of this relationship. Believing they are in love, Peter convinces Rebecca to figuratively give up her life for him by fleeing to America with him.

This idea takes a more literal turn when she allows Peter to possess her body, only to discover that he has drowned her in the lake. Unfortunately for Rebecca, there are too few happy memories, and she is doomed to spend eternity with the man she once believed she could love, reliving the ways he manipulated her time and time again. 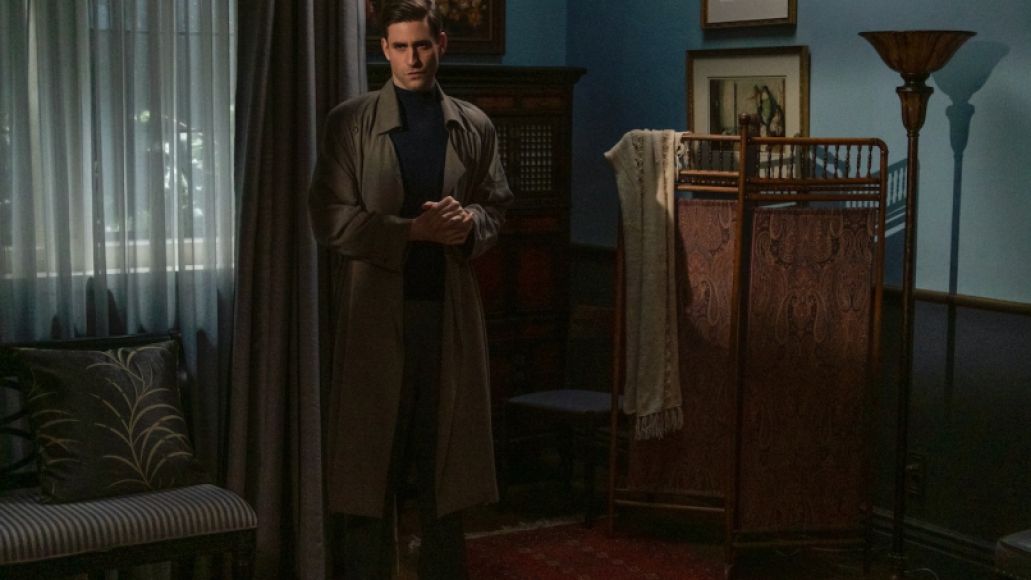 Peter doesn’t fare any better, though, as he’s tormented by a banging that signals the worst memory of his life. What seems at first to be a heartfelt reunion with his mother quickly turns emotionally abusive as she blackmails him into stealing money from his employer. He later attempts to escape Bly, even going so far as to steal the lives of Miles and Flora.

Eventually, we learn that Peter is a survivor of childhood abuse, one of the harrowing memories he continues to ricochet to in his own respective path. This revelation both adds context to his treatment of Rebecca, but really hammers down the true terror of memory hopping in Flanagan’s world: These memories belong to us, and they’re uncontrollable.

“Show me your face tonight…” 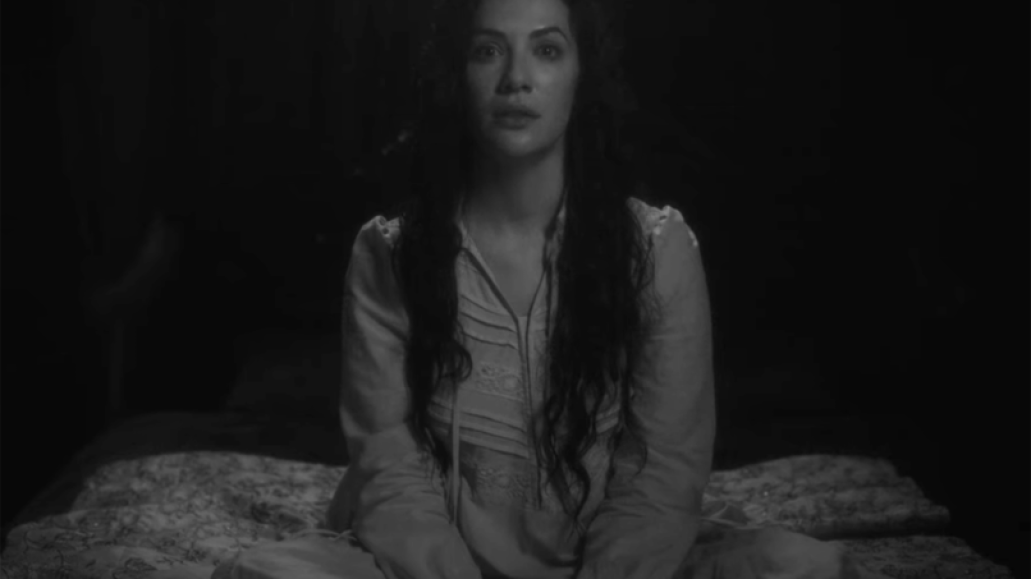 It’s with Viola Willoughby (Kate Siegel) that we see the long term affects of this emotional torture. She is perhaps the most formidable villain of Bly Manor, but Flanagan humanizes her by revealing that she, too, is a victim of loss.

In the penultimate episode, “The Romance of Certain Old Clothes”, we learn that Viola is the descendant of a nobleman and is the oldest daughter not allowed to inherit Bly Manor without a husband. Tragically, she is struck ill, and after years of watching life continue without her, she is betrayed by her own sister and denied the opportunity to visit her beloved daughter in death.

This tragedy fills Viola with both pain and rage, and she takes that pain out on those around her, punishing others with the fury that consumes her. Eventually, the need for connection of any kind to fill the empty void in her heart is all she can remember, and she’s left to walks the grounds of Bly Manor in a loop, dragging anyone in her path down into the lake with her.

With not a trace of humanity, Viola exists solely as an inhuman monster. 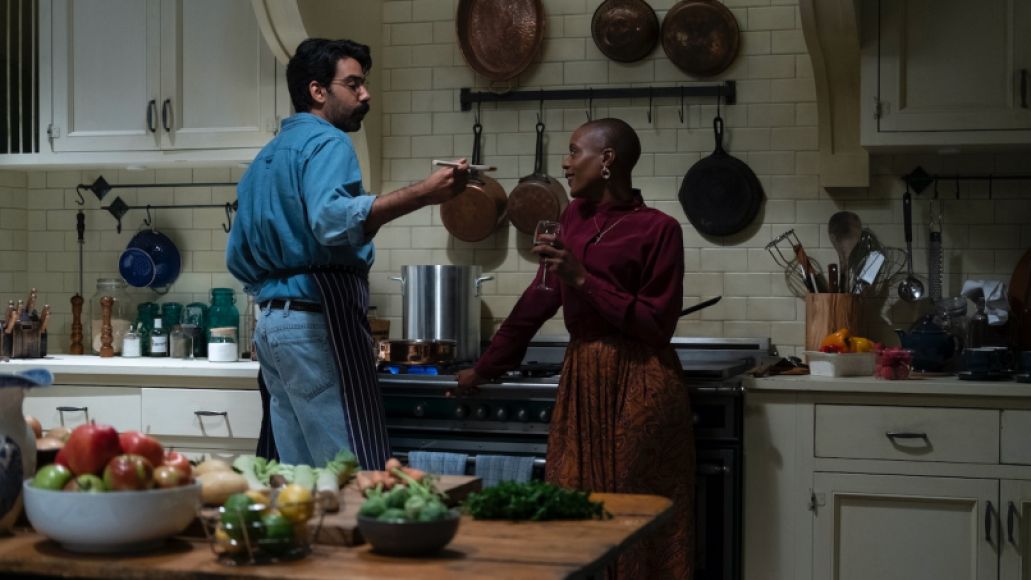 There is a silver lining.

As Hannah realizes that her beloved memory with Owen is not real, she begins to see the horror in living it over and over again. “What a life we might have had,” Owen says to her in memory, and the crushing reality that she can both never leave the grounds of Bly or experience the future she dreamed about with Owen is a sobering moment.

But Hannah lets go of the memory in a showing of strength, allowing Owen to live his life without her. Sure, she could attempt to control the memory, but it would not be a genuine life, and what’s worse, it would be robbing Owen of his dreams. This guilt would be far worse to carry than living an eternity spent without him. 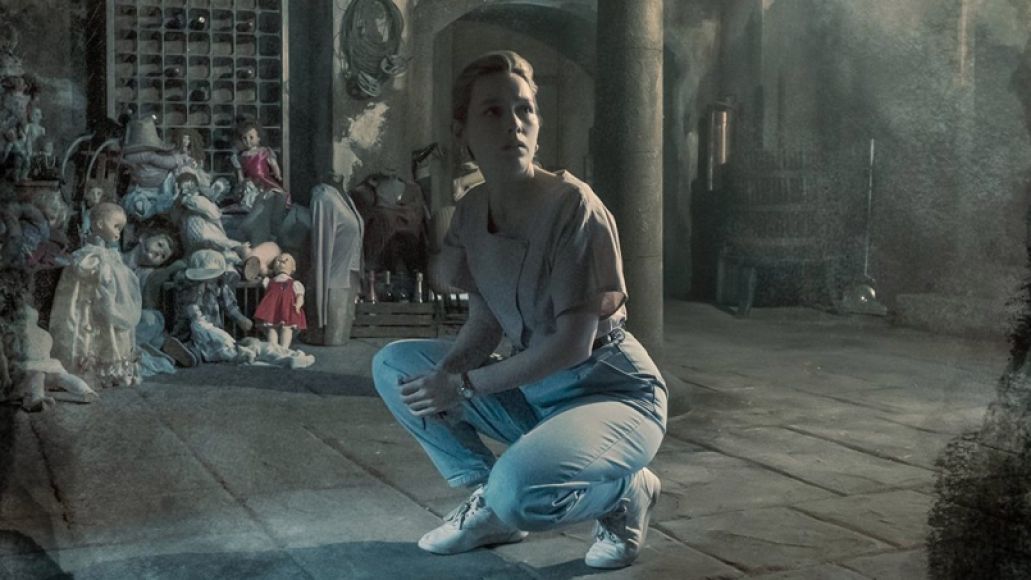 Though Bly Manor may not have as many overt scares as Hill House, the criticism that it’s not as scary is unfair. In the end, the horrors of opening up to another person may be harder to discern, but we deal with them every day.

Flanagan reigns in this notion by ending the season with Sheryl Crow’s “I Shall Believe”. It’s in this moment that both the terror and hope of this ghost story comes to fruition: None of us are promised a happy ending in life, and the risks of trusting another flawed human being with our love sometimes seems like an insurmountable task.

Every time we extend our heart we risk being hurt and many of us choose never to extend it at all. And yet, Bly Manor offers hope in its final scenes. The love we share with our chosen families and partners may fade, sure, but so will the pain of losing them. If we truly believe that the other person will hold on to us, just as we hold on to them, we will be alright.

Is The Haunting of Bly Manor Scary?