GOTV Meets WFH: We’re eight months into a global pandemic and 17 days away from the strangest presidential election in modern memory, so it’s no huge shock that this year’s get-out-the-vote efforts look drastically different than past cycles. Mostly, that’s meant a shift away from performing at rallies and towards ensuring that all votes get counted safely and fairly. Those efforts have taken various shapes that conform to our current isolation, from the swing state organizing of Justin Vernon’s for Wisconsin initiative to charity Bandcamp compilations like Talk-Action=Zero Vol. 2 and Good Music to Prevent the Collapse of American Democracy to weary remote testimonials shared in a recent Pitchfork feature.

Enter Run the Jewels. The Atlanta hip-hop duo of Killer Mike and El-P already owned one of the year’s most essential releases. Their fourth album, RTJ4, dropped in the midst of this summer’s protests of the police killing of George Floyd and soundtracked the righteous anger that continued boiling over throughout those warmer months. With plans for a tour with Rage Against the Machine scrapped due to the pandemic, the record’s songs hadn’t gotten the chance to make their live debut.

That all changed on Saturday night with the midnight broadcast of Holy Calamavote, a GOTV special produced in conjunction with Adult Swim, ice cream maker Ben and Jerry’s, and the American Civil Liberties Union. Hosted by madcap Adult Swim stalwart Eric Andre, the show struck up a bargain: in exchange for sitting through some voting pitches, viewers could watch the first-ever live performance of RTJ4 in its entirety. At the end of both a fractious election season and a lost year for live music, the trade-off seemed more than fair.

Live from Somewhere: Holy Calamavote started just as the prophecy on RTJ4 foretold: with Killer Mike and El-P rolling up in a vintage Buick Grand National ready to put in some work. Their destination? A performance space at Atlanta’s Tyler Perry Studios kitted out to look like a cross between a disused airplane hanger and the transporter room of the galaxy’s hippest spaceship. Situated in a tight circle ringed with video screens and dynamic lighting, the space’s setup was calibrated for maximum interplay between Killer Mike, El-P, and the handful of guests they had planned for the night. It wasn’t quite the raucous scene that the material deserved (and will eventually get, whenever touring can safely resume) but provided for some striking visuals all the same.

Yankee and the Brave… and Some Camera Operators: “Greg Nice everybody! …oh wait there’s no one here.” Perhaps old habits die hard for El-P, or perhaps he also missed the spark provided by the crowds at Run the Jewels’ typically frenetic live shows. Whatever the case, the necessities of COVID-19 forced the duo to trade people-powered crescendos for a more intimate version of their usual bombast. Aided by tight camerawork, Run the Jewels turned their Holy Calamavote performance into a close-up look at two masters at work.

For the most part, the special didn’t reveal anything about the material that listeners didn’t already know. “Yankee and the Brave” still has the best beats of the year, “Ju$t” still makes you want to burn your entire wallet, and so on. The real lessons came from the performers themselves. Orbiting around one another, seemingly held apart by the flows filling the air between them, El-P and Killer Mike showed off their veterans’ expertise in ways that made the impressive seem effortless. The night’s close-ups particularly benefited Killer Mike. Whether he was mugging for the camera during “Holy Calamafuck” or showcasing his seemingly bottomless lung capacity during “Goonies vs. E.T.”, the rap legend seemed genuinely happy to be back behind the mic. 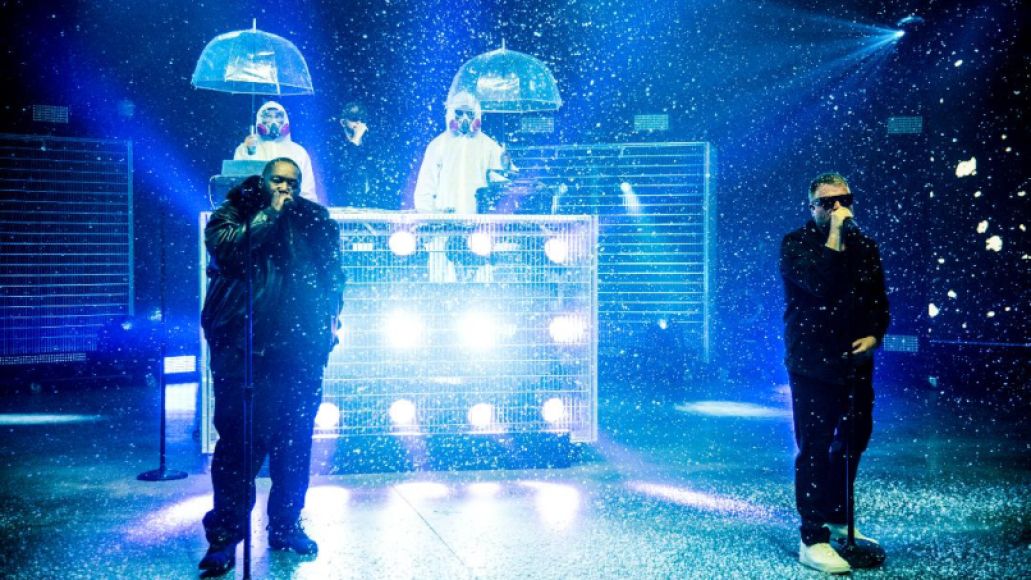 That One Song: Viewers knew going in that “Walking in the Snow” was one of the best tracks on RTJ4. Once the snow began to fall on the Holy Calamavote set, they also realized that it would likely be the performance of the night, as well. The mid-album highlight was given a mini music video treatment, complete with costume changes, extras (in the form of PPE-clad men holding umbrellas over the DJ station), and a guest appearance by vocalist Gangsta Boo. However, all of that gilding melted into the background the moment Killer Mike croaked out the line “I can’t breathe.” Then, a silence dropped over the set, as the duo let the final words of George Floyd, Eric Garner, and countless other Black victims of police violence hang in the now-quiet air. During this moment of silence, Mike’s eyes never broke from the camera, forcing viewers to meet his gaze and everything behind it. Eventually, he continued his verse sans accompaniment and added a new chapter to the legend of RTJ in the process. 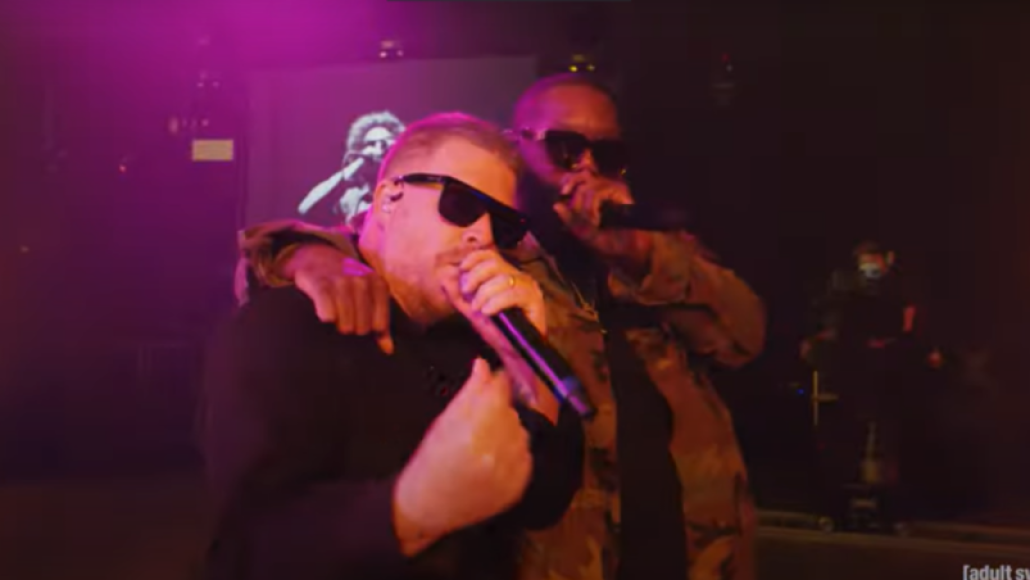 Guests from Near and Far: Gangsta Boo wasn’t the only guest that made an in-person appearance during the set. “Ooh La La” hookmaster Greg Nice and Outkast associate Cutmaster Swift also joined the boys for their Atlanta taping. Mostly, though, the other artists found on RTJ4 opted to take their turns via video screen. The best of these appearances were even aided by this remove. Pharrell and Zack de la Roca hovered in the background like truth-telling wraiths during “Ju$t” while Queens of the Stone Age’s Josh Homme added abrasive guitarwork and soloing as Mavis Staples delivered her stirring vocals on “Pulling the Pin” with a gravitas more associated with antique newsreels than hip-hop shows.

And Starring Eric Andre as Himself: Overseeing the night’s proceedings was comedian Eric Andre, who spent the special posted up in a dystopian call center that channeled the energy of a telethon and a hostage situation in equal measure. It’s hard to suss out the sincerity in any given Andre performance, and it’s made even harder by an election season that feels uniquely difficult to joke about. That said, you might’ve detected a hint of actual desperation in an early segment in which Andre declared “vote or die is now literal” (see above).

Somehow, even in the midst of a global pandemic and a Trump reelection campaign, it wasn’t all gloom and doom. During a lighter segment, Andre also turned in a contender to replace “The Star-Spangled Banner” as the new national anthem:

The Comment Section: Viewers who caught Holy Calamavote during the initial Adult Swim livestream were also treated to additional entertainment in the form of the site’s chat section, which provided a dizzying cross-section of the special’s audience. In between spammed chants of “BLM” and “Kill your masters” and arguments with a sole tenacious Trump troll, users found time to discuss what they were voting for (or against) this election season. During the special’s few slow moments, the chat offered a surprisingly civil spot of late-night introspection. As the Internet goes, that ain’t bad.

Below, a few comments worth preserving for posterity:

* Didgery: Hustle up with the nerd stuff, RTJ is almost on
* Tengris_Khan: If they put Killer Mike and Zach in the same room right now there would be a drone strike
* DrawdeHellfire: Eric Andre is furniture Gallagher
* Timkilledmyson: Vote Joe Brungus [Steve Brule emoji]
* JCthulhum: Vote this asshole out and let’s never look back 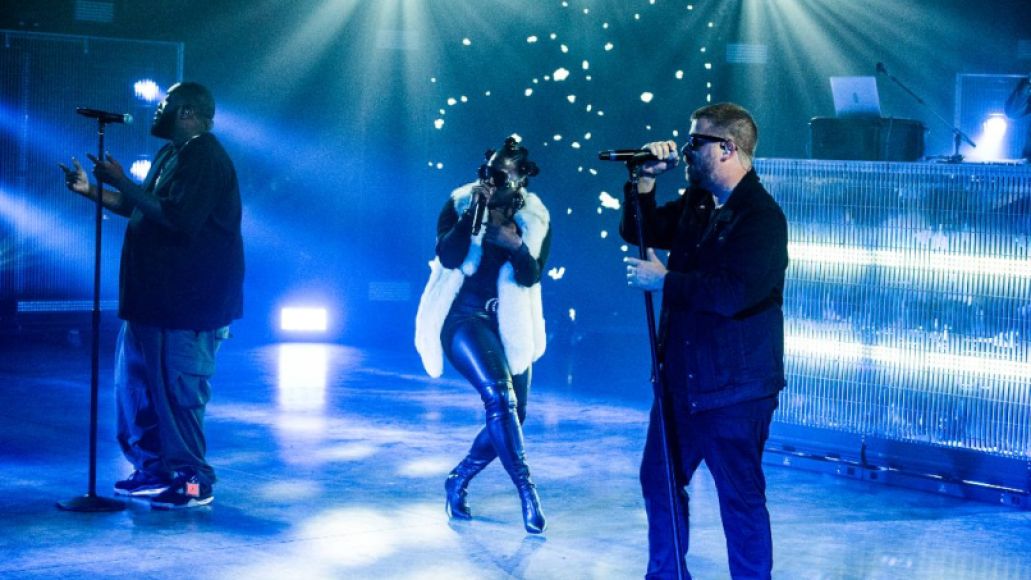 Endorsed by RTJ?: While Killer Mike and El-P were vocal supporters of Senator Bernie Sanders’ 2016 and 2020 presidential campaigns, they’ve been less forthcoming with support for eventual Democratic nominee Joe Biden. During a recent interview with Revolver, El-P revealed that he’d “probably” be voting for Biden because “[he’s] so goddamn desperate to see Trump out of office that [he’d] vote for fucking Chucky at this point.” In his own talk with GQ in July, Killer Mike was more skeptical, telling journalist Donovan X. Ramsey, in part: “I don’t give a shit if Joe Biden the person is moved to the left. I don’t give a shit about liking you or you liking me. What I give a shit about is if your policies are going to benefit me and my community in a way that will help us get a leg up in America. That’s it. Because we deserve a leg up, and I’m not ashamed to say it.”

While the duo maintained the technical definition of nonpartisanship during Holy Calamavote, both El-P and Killer Mike used their closing statements to lay out a picture of Run the Jewels’ priorities in the voting booth.

“We believe that the last thing that they want you to do is get out of your house and march down in person, mask on, and cast your ballot for what you think this country is supposed to be,” El-P said. “We want you to go down there, and when you get there: Tell ’em Run the Jewels sent you.”

Killer Mike was even more specific: “Vote local. Vote down the ballot. Vote for your mayor, judges, prosecutors. For the people looking over your life. Vote the bastards out of office and keep the good folks in.”

Setlist:
Yankee and the Brave (Ep. 4)
Ooh La La
Out of Sight
Holy Calamafuck
Goonies vs. E.T.
Walking in the Snow
Just
Never Look Back
The Ground Below
Pulling the Pin
A Few Words for the Firing Squad (Radiation)