The iconic British comic strip character Rupert Bear is celebrating his 100th birthday this year, and one of his most famous fans, Paul McCartney, is marking the occasion in a big way. On November 6th, The Beatles rocker will reissue Rupert and The Frog Song, a 1984 short film he dedicated to the yellow-scarfed little bear, as well as its original song “We All Stand Together”.

Written and produced by McCartney, alongside director Geoff Dunbar, Rupert and The Frog Song follows Rupert as he embarks on a merry walk throughout the hills. The friendly bear ends up witnessing a rare ritual called The Frog Song, which is of course “We All Stand Together”, or simply “The Frog Song” as its more colloquially known.

It’s a kids film, obviously, but it’s quite cute and was a total hit that even earned McCartney a Grammy nomination in 1986. “We All Stand Together” also ended up having a successful life of its own, peaking at No. 3 on the UK Singles Chart, and was pressed on a uniquely shaped picture disc. Now, 36 years after its release, the disc is being reissued in identical packaging alongside a restored version of the film.

Ranking: The Beatles’ Albums from Worst to Best

Paul McCartney on Finally Reconciling with John Lennon: It Would Have Been a “Heartache” If We Hadn’t

In a statement, McCartney explained his fascination with Rupert,

“I’ve always loved animation. It started with the Disney cartoons and went on from there. As a kid I would always get the Rupert Annual at Christmas. I remember getting the idea for a film project when looking through one of them. There was a standout image in color and when I saw it I could imagine a concert of frogs with them all doing different parts, a choir and an orchestra, and I could almost hear the music.”

McCartney also offered up a special shout-out to his beloved bear friend. “Congratulations to Rupert on his 100th birthday. The great thing is he never looks a day older,” the rock legend said. “Having been a fan of his since my early days in Liverpool, I know what he means to generations of young and old kids. In his character and attitudes to the world, he sums up the best of British tradition and reminds us of an innocence we would all love to cherish.”

Macca then called for a grand and royal request, “So, congratulations my little bear. Your fans are celebrating your 100th birthday and I for one think you deserve a telegram from the Queen.”

Pre-orders for the fun picture disc are available now. Take a listen to “We All Stand Together” below. 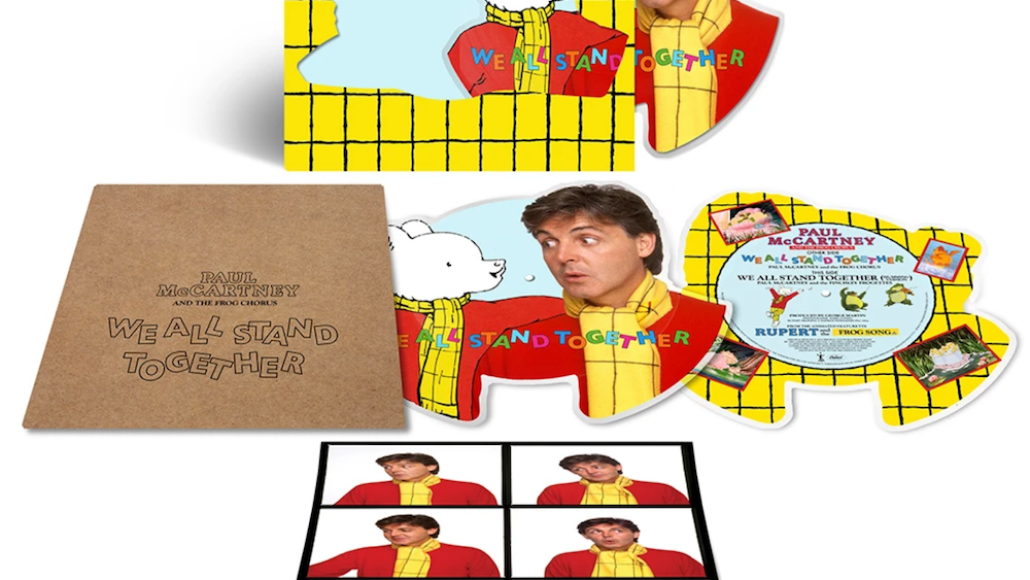