The Pitch: When we last left Mando (Pedro Pascal), he’d just been tasked with a holy Mandalorian mission to track down The Child’s species and return him to them — a mighty feat given that no one’s ever seen anything like him. Still, even though he’s left the bounty hunting life behind (for now), his quest will still take him to the farthest corners of the galaxy, righting wrongs along the way.

While Season 2 will surely have more answers to the show’s broader, arc-based questions, the series premiere, “The Marshal”, kicks off Disney+’s hit with a no-frills space Western of the classic mold. Seeking a Mandalorian rumored to be on Tatooine (the identity of whom any self-respecting Star Wars fan can piece together), Mando heads to a remote mining settlement on the desert planet.

Once there, however, he doesn’t find who we expect (Hint: it rhymes with Schmoba Schmett); instead, the iconic armor is strapped to a self-styled marshal named Cobb Vanth (Timothy Olyphant, dusting off his Deadwood bona fides), who’s been using the battered beskar to defend the townspeople from Tusken Raiders and all manner of miscreants.

Vanth is willing to part with the armor (albeit reluctantly), but on one condition: Mando helps him get rid of the giant krayt dragon that’s been besieging the town for months. It’s not an easy task, and one that might just require a fragile peace between both peoples — town and Sand — to accomplish. 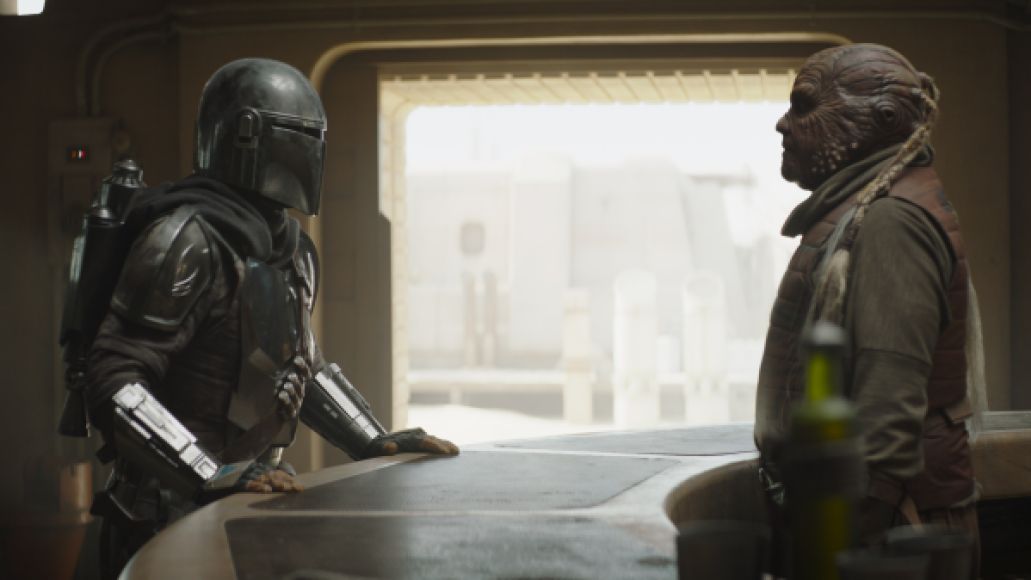 The Mandalorian (Disney Plus)

This Is the Way: The Mandalorian was one of last year’s biggest, most refreshing surprises, a stripped-down look at the Star Wars universe that provided welcome contrast to the universe-spanning bombast of The Rise of Skywalker. Given the critical success of its first season, it’s safe to say the show is the standard-bearer for the franchise — and the streaming service it calls home. Luckily, Season 2 seems to be off to a comfortable start as creator Jon Favreau (who writes and directs the premiere) steps back into the armor without missing a step.

The show’s always been about using its faceless lead as a showcase for the universe he inhabits, and “The Marshal” is a neat, if not entirely original, showcase for that. Sure, going back to Tatooine again when we already visited in Season 1 (in arguably its less-than-stellar entry) makes the universe feel a bit smaller. But this gives us an opportunity to flesh out even more of the planet’s culture than we had before, while also offering plenty moments of fanservice.

We see womp rats. Vanth rides around in a speeder cobbled together from one of Anakin’s old podracer engines from The Phantom Menace. We get to understand even more of the Tusken Raiders’ motivations (a needed reexamination, given the ‘cowboys-and-Indians’ metaphors the series has gone for). And hey, remember that R2 unit with the ‘bad motivator’ from A New Hope? Well, he’s back too!

As gratuitous as the references may be — picture the meme of DiCaprio pointing at the screen in Once Upon a Time in… Hollywood whenever one crops up — something about the bizarre alchemy of the show makes them feel like texture rather than the point. 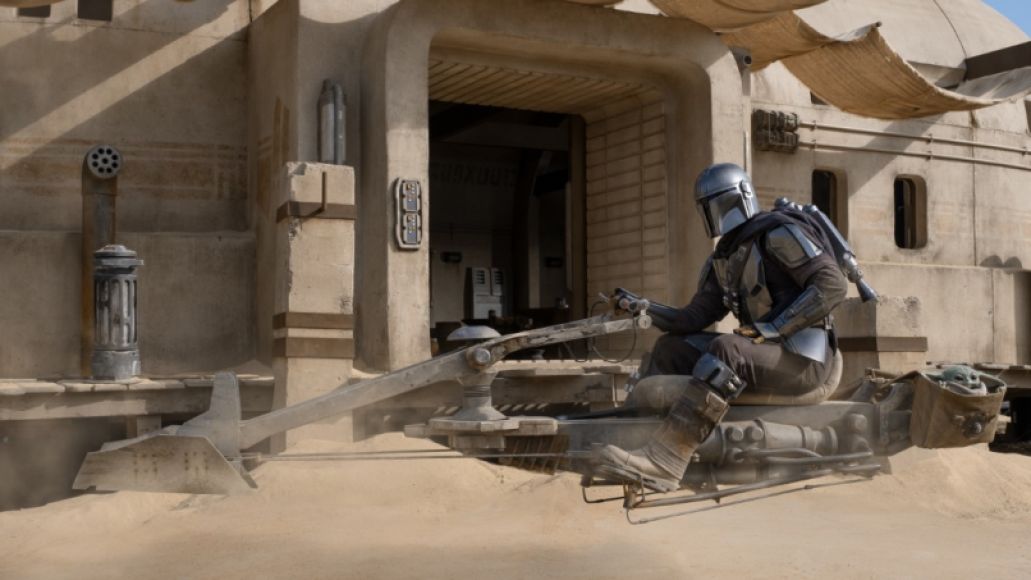 Boba Fête: The Mandalorian‘s guest cast is always an Inquisitor’s row of interesting faces, and we get our fair share here: John Leguizamo shows up in the opening minutes as an alien informer who tips Mando off to the location of another like him, and we get a welcome cameo from Amy Sedaris’ Ripley-coiffed Peli Motto, the galaxy’s greatest babysitter. But it’s Olyphant who takes center here, swaggering back into Seth Bullock mode as a good man who uses a life-saving opportunity to defend the settlement he loves so dearly. He’s much more the John Wayne figure than Mando’s Eastwoodian stoicism (Favreau feeding Olyphant lines like “I guess every once in a while, both suns shine on a womp rat’s tail”), but it’s hard to think of an actor who takes to that kind of sensibility than he. Pascal is good as always, but he’s still got to act past the helmet. Olyphant’s chiseled, handsome mug, by contrast, gets the lion’s share of screen time.

Walk Without Rhythm: As delightful as the episode is in a vacuum, one can’t help but worry that The Mandalorian is playing it safe in its season premiere. The rug-pull of not seeing Boba Fett (or so we think?) in favor of yet another Seven Samurai retread — which we already did in last season’s “Sanctuary” — is admittedly a bit disappointing. And it’s also a bummer that Baby Yoda is so superfluous here, mainly peeking out from a backpack or around a corner to fuel Twitter’s unceasing need for memes. At times, I’d wondered if Mando had simply left Baby Yoda with Peli; the story wouldn’t be any different, at any rate. 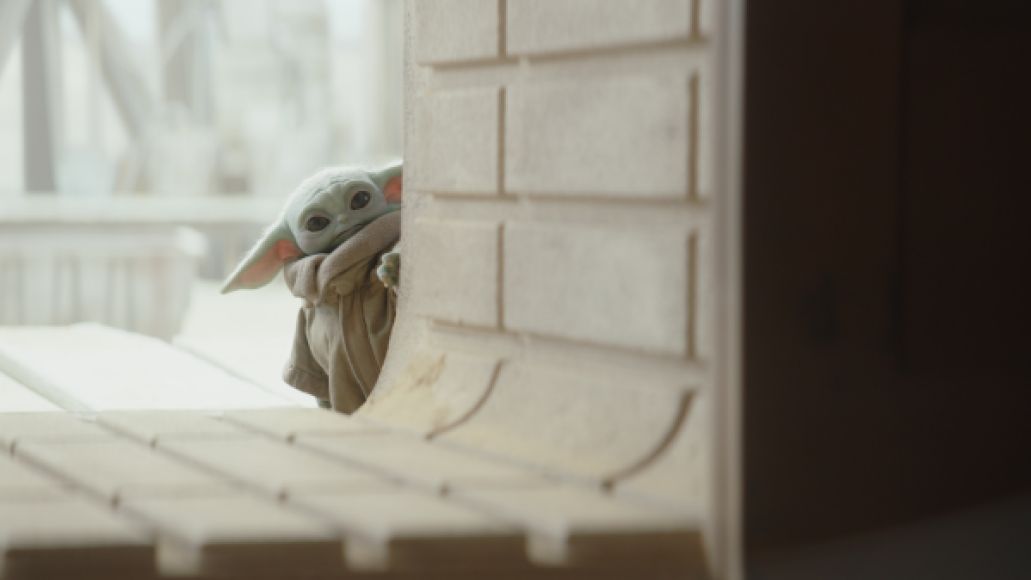 But it’s hard to fault those small lapses in ambition when the show’s entire point is to feel like the tinier adventures in the corner of a larger universe. The climactic set piece here, with Mando, Vanth, and a mix of townspeople and Tuskens luring a giant sandworm out of its cave to kill it for good, is more exciting in its simplicity than the flurry of starships in Skywalker‘s bloated finale. Everything from the costumes to Ludwig Göransson‘s Emmy-winning score to the blockbuster-level effects is on point here. The fact that it’s all filmed on virtual sets (a move that’s certanly advantages in a world where COVID-19 makes new productions exceedingly difficult) makes the whole affair even more impressive.

The Verdict: Much like the rest of you, we TV critics will be taking The Mandalorian one step at a time; no sneak peeks here. But while the season premiere feels like a story even the show has already tackled in its scant eight episodes, the show’s stripped-down space adventures are still here in fine form. And the premiere’s ending shot, which implies that the owner of Vanth’s armor may not be as dead as we think, is an enticing promise of more encounters to come.

Personally, I look forward to us getting to know more about The Child, see him bond with Mando, and learn whether last season’s Big Bad Moff Gideon (Giancarlo Esposito) will catch up with them. But until then, we should cherish The Mandalorian‘s commitment to its story-of-the-week structure, the kind of old-school TV adventure we don’t see anymore. That it’s dressed up in the fascinating textures of a galaxy far, far away makes it all the sweeter.

Where’s It Playing? The Mandalorian Season 2 blasts off on Disney+ every Friday.