The Lowdown: Megan Thee Stallion’s 2020 was one of turbulence with moments of immense triumph thrown in. She celebrated the two biggest hits of her career: “Savage” (which was accompanied by an epic Beyoncé remix) and her Cardi B collaboration, “WAP”, a song that dominated the cultural discourse for months. Megan graced the covers of notable magazines: Time, W, Marie Claire, GQ, and Rolling Stone. However, in July, she was the victim of a violent shooting allegedly at the hands of singer Tory Lanez. After callously becoming a meme on the Internet and the subject of endless slander, she took to her Instagram Live to address the incident and identify Lanez as the person responsible for it.

Shortly after, Meg used her October Saturday Night Live performance to remind the world that Black women are routinely unprotected and disrespected. A week later, she discussed why she stands up for Black women in an op-ed for The New York Times. Megan’s Fashion Nova line raked in over a million dollars just days after its release earlier this month. Finally, her debut album, Good News, was released on Friday and seems like the rapper’s perfect sendoff to a tumultuous year. She has always been an adept lyricist; three mixtapes and three EPs later, her talent has been all but cemented. However, listeners still eagerly await each and every one of her projects because she always has something relevant to say.

The Good: Megan Thee Stallion comes out the gate swinging with opening track “Shots Fired”. The ferocious tune, which samples The Notorious B.I.G.’s 1995 song “Who Shot Ya”, takes aim at Lanez without ever mentioning his name regarding the altercation. Instead, she decides to go straight for the jugular: “You shot a 5’10” bitch with a .22/ Talkin’ bout bones and tendons like them bullets wasn’t pellets/ A pussy nigga with a pussy gun in his feelings.”

She eagerly goes round for round with DaBaby on “Cry Baby” and does it with titillating precision. “Freaky Girls”, which features a cameo from SZA, capitalizes on both women’s inherent sultriness. SZA cleverly injects Adina Howard’s “Freak Like Me” into the chorus as Megan’s gritty bars expand on all of her sexual desires.

An appearance from Popcaan on “Intercourse” is one of the best moments on Good News. His smooth and lurid vocals feel confectionary and inspire Meg to soften up her bars a bit while still maintaining her signature salacity. She playfully experiments with singing on “Don’t Rock Me to Sleep” and “Outside”. Although it’s clear that she is still in the beginning stages of harmonizing on her tracks, it’s a fun reprieve on a project that gets a little lost in her own grandiose ambitions.

The Bad: At 17 songs long, Good News doesn’t have enough cohesion or much of a narrative arc to justify its length. While “Body” is an undeniable hit record, the repetitive nature of its hook makes it a slight nuisance to listen to. The remix to “Savage” is on the album, but the original song was featured on Meg’s March Suga EP and has no logic for being on this particular project. “Girls in the Hood”, in which she samples Eazy-E’s “Boyz-N-The-Hood”, is an exciting opportunity to put her spin on the classic West Coast anthem. However, she doesn’t interpolate enough of the song’s original chorus for its potency to stick. Her performance on SNL and piece in The New York Times showed the dimensionality of Black womanhood; it would have been interesting if Megan leaned into that more lyrically on her debut.

The Verdict: Good News showcases Megan the Stallion’s creative depth, her euphonious inventiveness, and libidinous wordplay. She completely demolishes any track she appears on. Meg’s first album encapsulates her reality as a Black woman artist — especially since that means the world feels like it’s against you for simply existing. Good News is a sonic representation of resilience. The 25-year-old emcee has been through a lot in her brief career but still finds the resolve to channel her pain into song. We are more than familiar with Megan’s brilliance, but her debut album expands on it and reminds us that the charismatic artist can outrap your favorite in the game any day of the week.

Pick up a copy of Good News here… 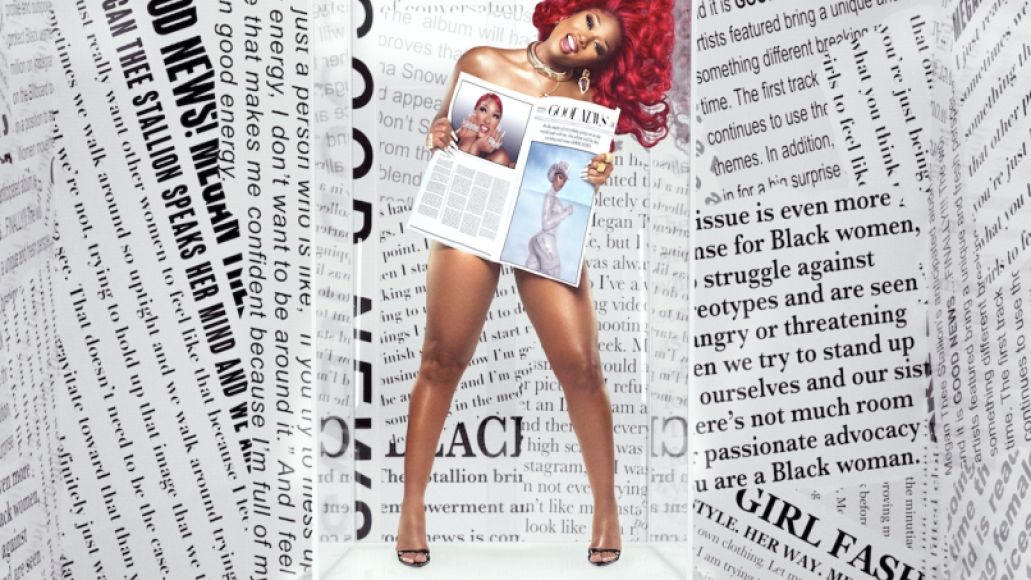