The gift of the Thanksgiving gods smiles upon us this day, as we awaken from our turkey-and-stuffing-induced comas, slide over to Disney+, and find another episode of The Mandalorian awaiting us, “The Jedi”.

Finally, after half a season of standalone adventures, we finally make some progress in Din Djarin’s (Pedro Pascal) mission to bring Baby Yoda back to his people, the Jedi. Along the way, we meet yet another old friend from the animated shows, an even older friend from ’80s genre classics, and learn perhaps a bit too much about Mando’s adorable young charge.

Let’s go over everything we learned, and a few things non-animated show watchers might not know about this week’s special guest. Of course, it goes without saying that there are some major, major spoilers ahead.

You must be cautious.

Who is Ahsoka Tano? 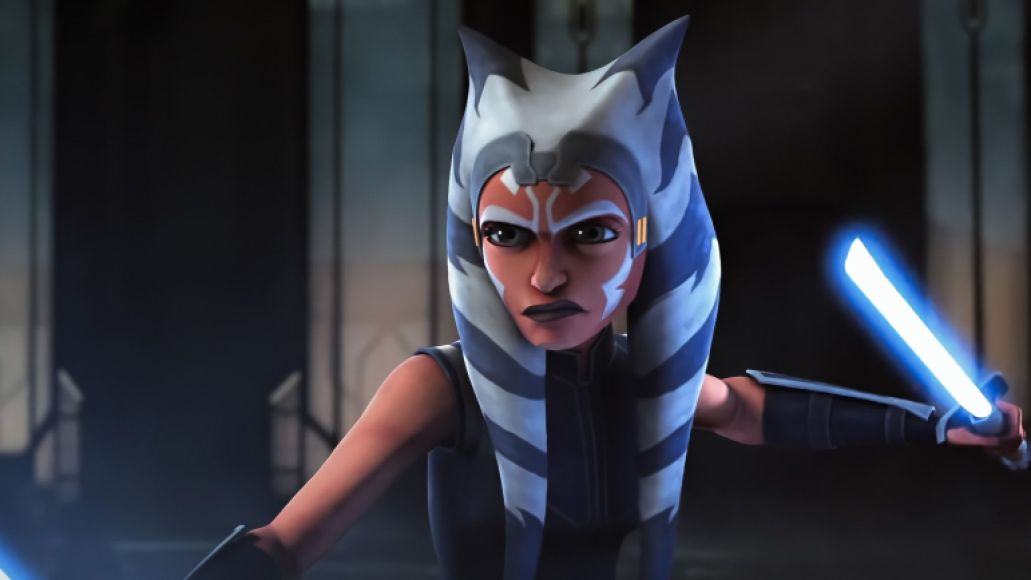 As we learned a couple of weeks ago, Mando is on his way to the planet Corvus, to track down Bo-Katan’s (Katee Sackhoff) Jedi contact Ahsoka Tano (Rosario Dawson). For those of you who don’t watch the animated shows, Ahsoka is a fan-favorite character from Clone Wars and Rebels — the former Padawan to Anakin Skywalker, turned rogue Jedi after Order 66. (She also spent a spell in a kind of Jedi time limbo called the World Between Worlds, but that’s another story.) Dave Filoni, who worked on Clone Wars and writes and directs this episode, has a close connection with Ahsoka: She’s the first original character he ever drew for the show.

The last time we saw her was in the finale of Star Wars Rebels, an adult Jedi venturing out into the universe to search for Rebels protagonist Ezra Bridger after he mysteriously disappears (along with another special character we may end up seeing, but more on that later). Presumably, she still hasn’t found him yet, which is why she’s on Corvus shaking down an evil Magistrate who might know where Ezra’s acquaintance may be.

Why are Ahsoka’s lightsabers white? 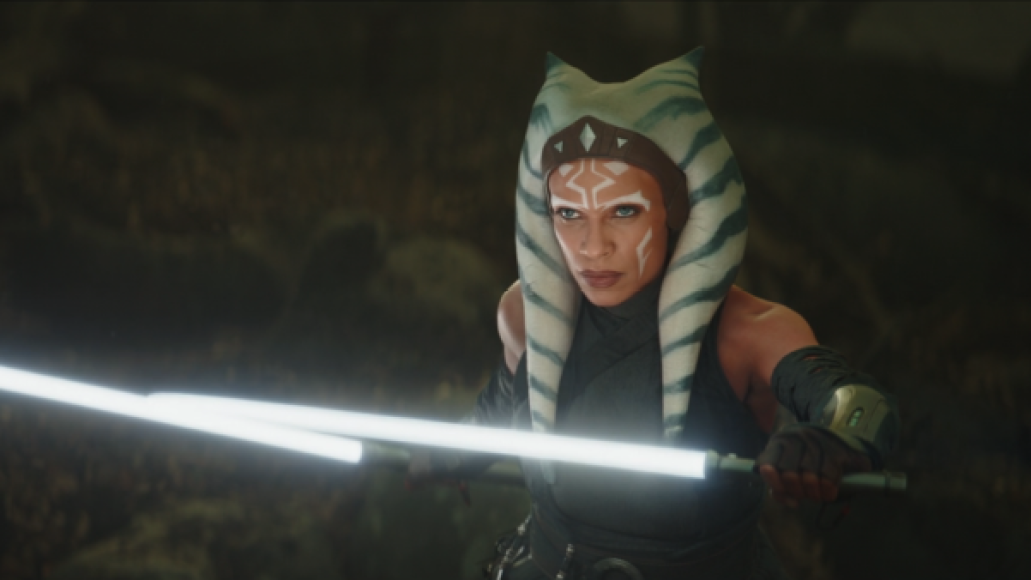 Good question! Throughout the animated shows, Ahsoka trained in a style of lightsaber fighting called Jar’Kai, which manifests in dual-wielding one regular-sized saber and one shorter “shoto” saber. Her sabers used to be green, then blue (after the first time she left the Jedi Order); she’s made a couple of new ones, which she’s had since Rebels.

As it stands, Ahsoka’s neither affiliated with the Jedi or the Sith (though she apparently has a stronger connection to the light side than many other Jedi), which leads to the colorless sabers.

When Mando finally comes across Ahsoka, it’s ostensibly under the guise of killing her for the Magistrate of a walled town called Calodan, which Ahsoka has been attempting to free from her tyranny for some time. But when they meet, Mando lets on to his real mission: finding a Jedi who can take in The Child. Luckily for Mando, Ahsoka can kind of understand Baby Yoda, and finally tells us his real name.

According to Ahsoka, Grogu was a youngling who was raised in the Jedi Temple on Coruscant, where many masters trained him over the years. But when Order 66 hit, someone took him from the temple and hid him from the soon-to-be Imperial forces. After that, his memory becomes “dark,”, and all we know is that he was alone for much of that time. No wonder he’s glommed so closely onto Mando.

While we’ve gotten these crucial crumbs to Baby Yoda’s backstory, there’s still plenty to uncover, which we’ll likely get more of as the season continues.

Is that…. Michael Biehn? 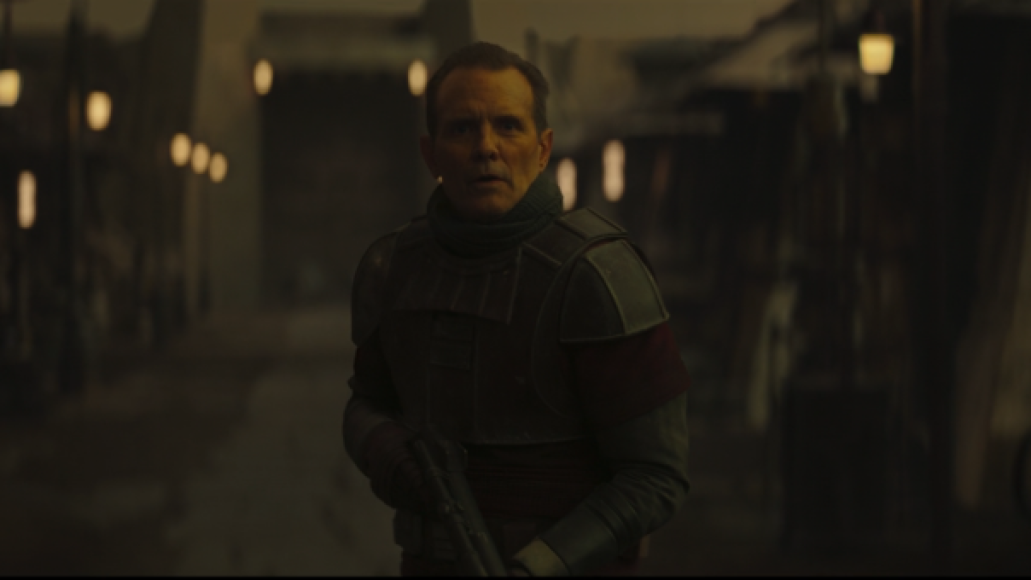 The very same! Lang, the Magistrate’s heavy who doesn’t get much to do except a neat little scene where he tries to bluff Mando into thinking he’s giving up (complete with that old chestnut “We’re a lot alike, you and I”), is played by ’80s action star and James Cameron muse Michael Biehn. It’s a treat to see the star of Aliens, The Terminator, and The Abyss get to do a Star War, running around in chunky armor and firing off a laser shotgun before getting unceremoniously merked by our armored protagonist.

Between Biehn and Carl Weathers, The Mandalorian feels like an olive branch to the action stars of ’80s kids’ childhoods, which is a good way to keep the grownups hooked.

Who is Morgan Elsbeth’s Master? 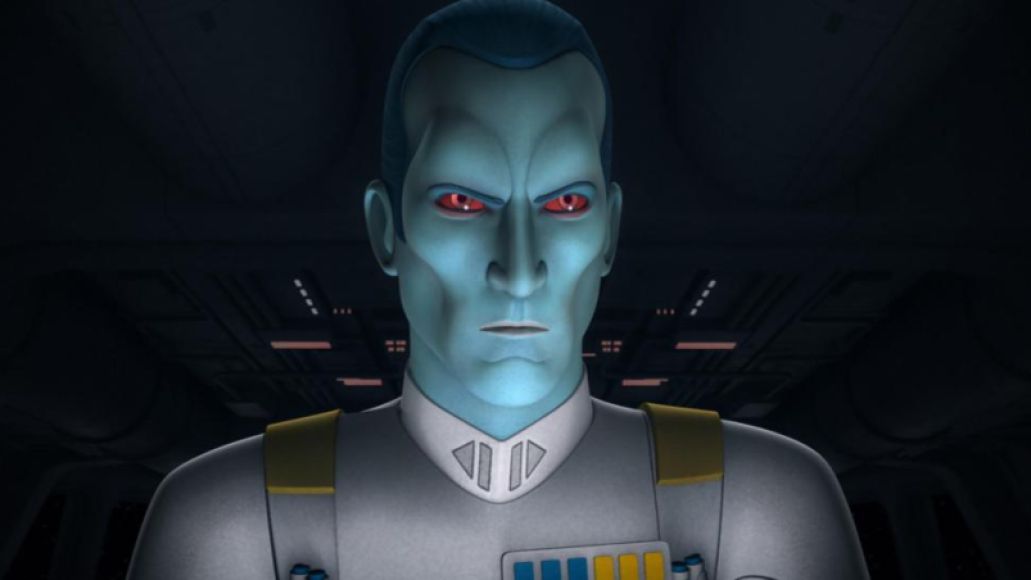 But the real baddie, of course, is the Magistrate Ahsoka’s going after, a woman named Morgan Elsbeth (stuntwoman Diana Lee Inosanto), with whom she engages in some neat lightsaber-on-beskar-staff combat in the zen garden-like courtyard of her palace. Of course, Elsbeth isn’t Ahsoka’s real target: she’s after the Magistrate’s “master,” Grand Admiral Thrawn.

Thrawn is a character who dates back all the way to the first Star Wars Expanded Universe books (now called “Legends”), the Chiss Imperial officer who became the highest-ranking non-human in the Imperial Navy. He’s known as a brilliant tactician and a ruthless warrior, and he’s cropped up in both Clone Wars and Rebels, the latter as a major antagonist. He’s also the person last seen with Ezra Bridger before their disappearance, which probably explains why Ahsoka is so keen on finding him.

Where will Mando and *gags* Grogu go next? 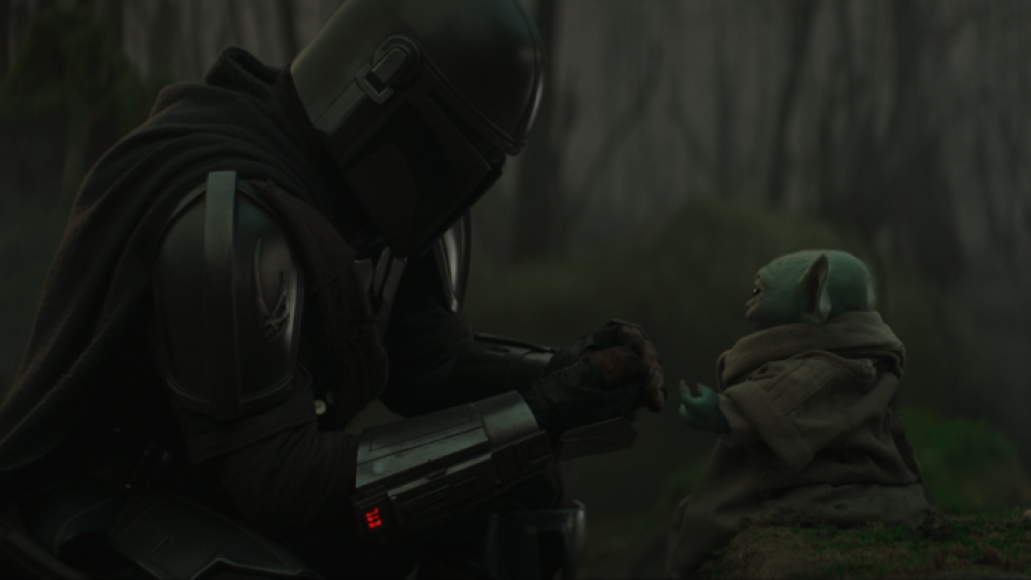 With Elsbeth defeated and the town freed, Mando hopes that Ahsoka will take Grogu in to train him as a Jedi. Unfortunately, she simply can’t take on that responsibility; Grogu’s bond with Mando is too strong, plus there’s the whole not-really-a-Jedi-anymore thing.

But there’s a chance there are other Jedi who might be able to reach him if they go to the planet Tython, where the ruins of a Jedi Temple lay. Place Grogu on the seeing stone on the top of the mountain, Ahsoka says, and if he reaches out with the Force another Jedi may come a-calling.

My bets are, though, that Grogu will choose to stay with Mando. We can’t be rid of the little guy yet!