Consequence Podcast Network and Sony’s The Opus is back for Season 11 with a new host and a new classic album to explore. Click here to listen as host Jill Hopkins (The Moth Chicago, Making Beyoncé podcast) conjures the enduring legacy of Santana’s landmark Abraxas. Also, after you read this article, scroll below to enter our exclusive Santana giveaway or score some original Opus swag.

The story of Carlos Santana and the band that bears his name has been one of near-constant evolution. Critics and fans have attempted to tame Santana’s catalog over the years by sorting the group’s 25 studio albums by era, style, or lineup. That’s not a totally fruitless exercise. Nobody, for instance, will mistake the frenetic jam session that is Santana’s seminal 1969 debut for, say, the earthy jazz-fusion tones of ’79’s Moonflower or the radio-ready blues rock found in the chart-topping fare of turn-of-the-century comeback Supernatural. And yet, all of these are chapters of the same ongoing story. However, when we step so far back to look at this larger shift across decades, we can find ourselves neglecting the nuance, inventiveness, and left turns taken between albums, songs, and even within single movements on tracks. It’s these elements — deliberate, improvised, or otherwise conjured — and the spell they cast that make Abraxas an adventurous and unpredictable listen even half a century on.

To fully appreciate Abraxas — that is, to believe it’s some portended, almost-mystical force of nature … or at least a longshot to have topped the charts for six weeks back in 1970 — requires a brief look at how the planets aligned for Carlos Santana and the band’s classic lineup: Gregg Rolie (lead vocals, Hammond organ), Michael Shrieve (drums), Michael Carabello (congas, percussion), and José “Chepito” Areas (timbales, congas, and percussion). A mere two years after famed promoter Chet Helms had told Santana that a Latin-infused rock band couldn’t succeed and that the guitarist should return to his day job as a dishwasher, the band had scored a record deal, cut their self-titled debut, and catapulted into the public’s imagination with an appearance at Woodstock. The now-iconic documentary Woodstock even features an infomercial-length jam session as the band jubilantly sync rhythms with the masses during a sprawling rendition of “Soul Sacrifice”. It’s one of the weekend’s most memorable moments and part of the reason audiences were both hip and open to Santana when their largely instrumental debut came out just two weeks later.

A little more than a year later, Santana found themselves about to release their sophomore album, Abraxas. Their debut, which would go platinum twice over, had been a top-five album, and their hypnotic cover of jazz percussionist Willie Bobo’s “Evil Ways” had scored them a top-10 single and would go on to become a founding staple of modern classic-rock radio. All of a sudden, the unlikely Latin-blues collective from San Francisco were internationally known and sought after. Santana now had to worry about blisters on his fingers rather than dishpan hands, but also how to follow up such unexpected success and handle new levels of expectation. The answers to that dilemma seemed to flow through the guitarist himself.

Abraxas would be its own beast (as the opening track’s title might suggest), flesh adhering to bone through a mix of Carlos Santana’s interests, influences, and a series of serendipitous moments. For instance, the cover art of Abraxas features the 1961 painting “Annunciation” by German-French artist Mati Klarwein. Santana had just happened to have seen the painting in a magazine and made an inquiry. Not only has the album cover gone down as one of the most iconic in rock and roll history, but Klarwein would go on to design for many other artists, including one of Santana’s personal heroes, Miles Davis. These types of whims that turn into the stuff of legend seemed to pile up around Santana in those early years. It makes one begin thinking that we were somehow always destined to be talking about Abraxas 50 years later.

Like so much of Santana’s best work, Abraxas finds its way into our bloodstream. In a band with three percussionists and one of the most innovative blues guitarists of all time, reason stands that the music’s entry point might be to tap into our pulse as it does in the opening, dance-inducing drumming on Santana or to strike a nerve via a melodic guitar groove that manages to be infectiously sweet one moment and sharply penetrating the next. Neither is the case here, though. As Abraxas stirs, and “Singing Winds / Crying Beasts” slowly awakens, the opening song’s titular winds pass through chimes and find passage into our lungs. It’s everything that opener “Waiting” wasn’t just an album earlier. Gone is Gregg Rolie’s swirling, hurricane organ; the percussion’s locked-in, insistent throb; and the incendiary sprint to the finish. Instead we have menacing keys that wander, hushed percussion that sounds like thunder rolling in the distance, instruments mingling and fading out like guests making rounds at a cocktail party, and a tension that builds from restraint rather than a rising. It’s Santana and band breathing through us, demonstrating that they have more than one way to commune with an audience.

Perhaps the best advice Santana manager Bill Graham ever gave the band was that while their natural inclination to jam made them unique, all of that could fall upon deaf ears without some song structure for audiences to fall back on. It’s a criticism that Carlos Santana took to heart. Hence, we come across the guitarist’s take on “Black Magic Woman”, originally written by Peter Green of Fleetwood Mac, who, like Santana, was a B.B. King disciple. Galloping percussion and flourishes on keys give the version legs that Green’s lacks as the jam becomes a back-and-forth between Rolie’s voice and Santana’s guitar to see which can be the smoother instrument. The seamless addendum of Gabor Szabo’s “Gypsy Queen” not only reveals reverence for the Hungarian’s eclectic palette as a guitarist but also Santana’s growing ability to incorporate his own culture and loves into a structure that could climb the charts. Likewise, the band turn the spirit and drive of “King of Latin Music” Tito Puente’s mambo “Oye Como Va” into a radio-friendly jam session, complete with punctuated stomps and the titular lyric giving even non-Spanish speakers a chantable chorus and a beat to dance to. Both “Black Magic Woman” and “Oye Como Va” would chart high and prove, once and for all, that Santana’s fusion of Latin music and blues could turn out marketable rock and roll.

It’s beyond the radio hits that Abraxas turns most adventurous, though. “Mother’s Daughter” takes a typical blues tale of “woman done me wrong” and turns it into one of the wildest laments imaginable. The song stalls and starts, throwing fits and tantrums as Santana switches between belching riffs out over rapid-fire hand percussion and summoning lightning like few guitar gods can — the song’s concluding fade-out coming like an act of mercy for an audience pummeled into submission. “Hope You’re Feeling Better” finds Rolie in his best voice on Abraxas, his smooth delivery of the song’s inquisitive verses and bark on the titular chorus giving structure to the album’s funkiest jam and Santana’s psychedelic explorations. Complex instrumental “Incident at Neshabur” — co-written and played on by Santana’s friend Alberto Gianquinto — runs the gamut from harsh waves of guitar giddy-up to some of the most delicate moments on the record. Its eclectic path and time changes show that lyrics aren’t always necessary to tell a story.

It’s during Abraxas highlight “Samba Pa Ti” (trans: “Samba for You”) that the listener first gets a pause on the album — a calm moment of consideration between the two storms that are “Mother’s Daughter” and “Hope You’re Feeling Better”. Santana got the idea for the song from listening to a street performer play jazz saxophone outside his apartment on a Sunday afternoon in New York. Truer to the point, the man was drunk and, as the guitarist explains, couldn’t decide whether to put the bottle or his saxophone to his mouth first. Santana claims he wrote “Samba Pa Ti” on the spot and has said that it was the first song he felt really belonged to him. In that light, Abraxas feels like those tensions — whether bottle or saxophone, Latin music or rock and roll, or Mexican culture or American — playing out in wild, weird, and wonderful ways. It sounds like Carlos Santana and band searching for and finding something to truly call their own. 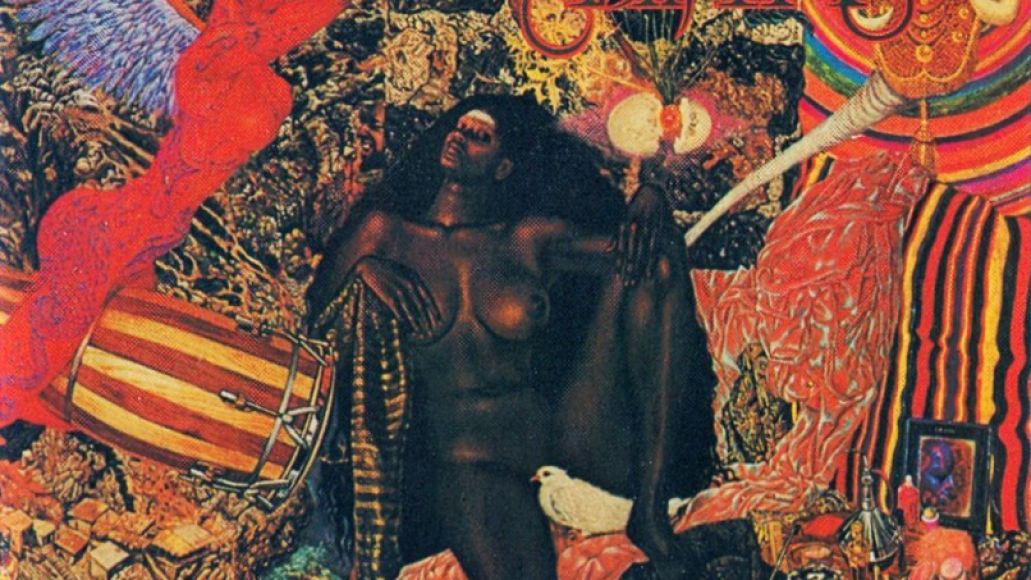 The premiere episode of The Opus: Abraxas debuted on Thursday, November 19th. Make sure you subscribe now to keep up on all the new episodes. Also grab yourself an official Opus hoodie or T-Shirt.

In addition, we’re celebrating the new season by giving away one (1) SE Santana Singlecut Trem in Egyptian Gold from PRS Guitars and a copy of Abraxas on vinyl. Five runners up will also receive vinyl editions of Abraxas. To enter, simply fill out the widget below. (Note: If you’re having trouble seeing the widget, enter here.)